Ukraine – how the Russian invasion could derail the f...

Ukraine – how the Russian invasion could derail the fragile world economy 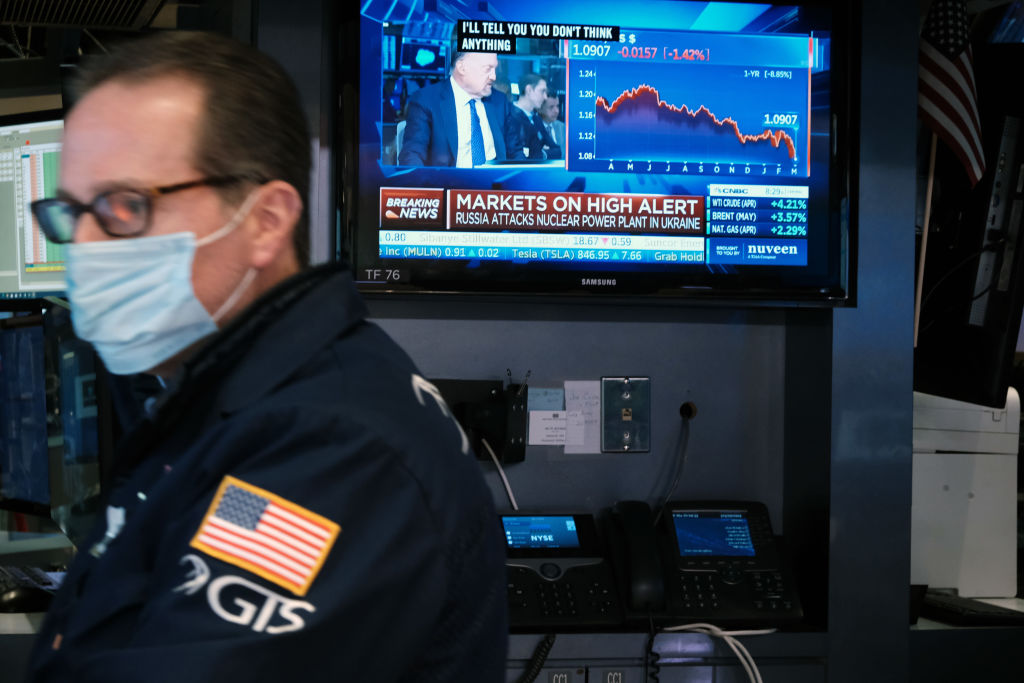 NEW YORK, NEW YORK - MARCH 04: Traders work on the floor of the New York Stock Exchange (NYSE) on March 04, 2022 in New York City. The Dow fell over 300 points in morning trading despite a positive jobs report as the war in Ukraine continues to worry investors. (Photo by Spencer Platt/Getty Images)

The invasion of Ukraine comes at a delicate time for the world economy, which was just beginning to recover from the ravages of Covid. Russia’s war could now have far-reaching economic consequences, as financial markets tumble and the price of oil soars.

A worrying comparison can even be made to the 1973 Yom Kippur war in the Middle East, which led to an oil crisis. This shook the world economy to its foundations and signalled the end of an economic boom which had done so much to reduce unemployment and raise living standards.

Today the world economy is much larger than it was back then, but it has been growing much more slowly in recent decades. And the pandemic struck a mighty blow over the last two years, with governments forced to spend vast sums on bailing out their own economies.

Now, despite some signs of recovery, the risks of higher inflation and lower growth remain, with large debts limiting the ability of many governments to intervene.

Key to the weakening economic outlook are rising energy costs and continuing disruption to supply chains – both of which will be made worse by the Ukraine crisis. Russia is the EU’s largest supplier of gas and oil, and higher energy costs mean more expensive transport, affecting the movement of all kinds of goods.

But perhaps the biggest risk to the world economy is that a prolonged crisis could tip the world into stagflation, a combination of high inflation and low economic growth. This was a key problem after the 1973 oil crisis, but one which many economists hoped has been consigned to history, with relatively low and stable prices for the last two decades.

Cost of living could worsen

High and rising inflation will exacerbate the cost-of-living crisis which is already affecting many consumers. It also presents a dilemma for central banks which have been pouring money into the economy for the last two years of the pandemic.

Most are now planning to gradually withdraw this support at the same time as gradually raising interest rates to curb inflation.

But this will further weaken the economy – especially if inflation continues to accelerate and central banks react with dramatic interest rates rises. During the 1970s crisis, the US Federal Reserve had raised interest rates to 10% by 1978, causing a deep recession. The following year in the UK, Bank of England interest rates reached 17%, precipitating a sharp economic decline.

Hopes that inflationary pressures will ease by the middle of 2022 now look optimistic. Russia and Ukraine are among the world’s biggest exporters of wheat  and many (especially in Europe) depend on Russian oil and gas, so energy and food prices could continue to rise further.

And it’s not just the rate of inflation which matters, but also people’s expectations that it will rise further. This can spark a “wage-price spiral”, where people demand higher wages to compensate for the higher cost of living, forcing companies to increase prices further across the board to pay for the wage rises. Central banks are then forced to raise interest rates even higher.

Inflation also means that government spending could fall in real terms, reducing the level of public services and squeezing public sector pay. And if firms become concerned that they cannot raise prices enough to compensate for higher wages, they may be tempted to cut back on their workforce, leading to higher unemployment.

While the central banks have been pumping huge amounts of money into financial markets in order to help stabilise a weak economy, one effect of this has been that the stock markets remained remarkably buoyant over the last decade, rising by nearly 10% each year on average.

Stocks had already started to fall this year after central banks announced that they will unwind this support, and markets have fallen further since Ukraine was attacked. If stagflation returns, central banks will have to reduce their support even faster, while a slowing economy would hit corporate profits and further depress stock prices (although energy stocks would rise). This in turn could reduce investment and business confidence, leading to fewer new jobs.

For many people who hold stocks or other assets, rising prices often lead to a “wealth effect” where people are more confident about spending (and borrowing) money, especially on big ticket items. Weaker markets would therefore affect economic growth, as well as the viability of pension plans which many people depend on.

So while there is much uncertainty about the political and human consequences of Russia’s attack on Ukraine, the world should also be prepared for serious economic ramifications.

Europe is likely to be first in the path of any economic storm, partly because of its greater dependence on Russian energy supplies, but also because of its geographical proximity to a war on its doorstep.

In the US, any economic difficulties could further weaken the Biden administration and bolster isolationist, America-first views. Meanwhile, a global alliance between Russia and China could further strengthen both economies, overriding any effect of sanctions, and strengthening their military as well as economic clout. DM/ML