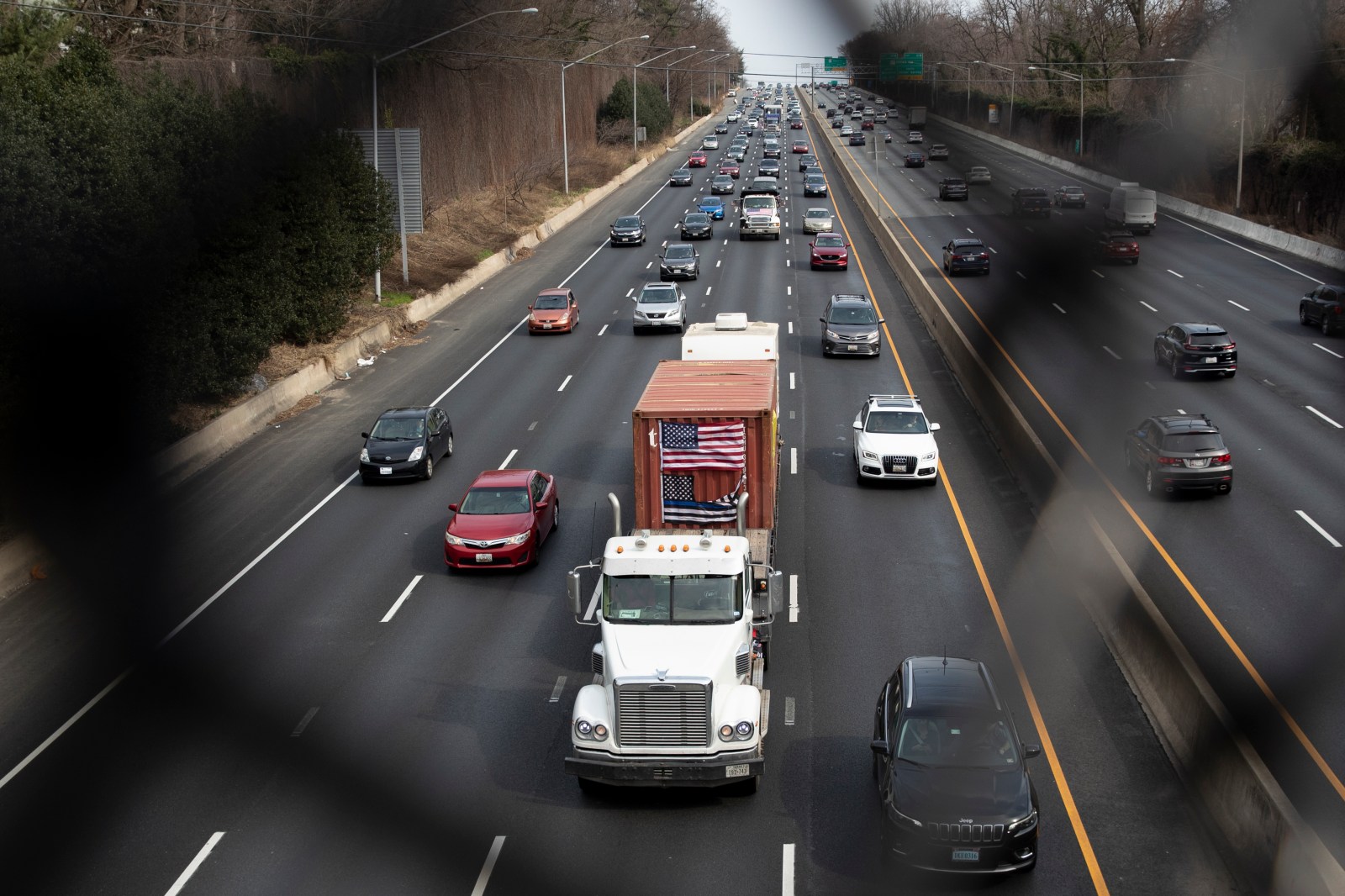 epaselect epa09806384 The People's Convoy, an anti-vaccine mandate truck convoy originating on the west coast, drives in the second lane of the outer loop of the Capital Beltway near Washington, DC, in Silver Spring, Maryland, USA, 06 March 2022. The convoy's stated mission is to see the end of the declaration of the national emergency concerning the Covid-19 pandemic and to restore the Constitution. The convoy has been joined by a large number of Trump supporters, far-right groups and conspiracy theorists. EPA-EFE/MICHAEL REYNOLDS

WASHINGTON, March 6 (Reuters) - Hundreds of trucks, recreational vehicles and cars circled the outskirts of Washington on Sunday, aiming to slow traffic around the capital as part of a protest against pandemic restrictions.

The so-called “People’s Convoy,” which originated in California and has drawn participants from around the country, is calling for an end to all pandemic-related restrictions. It was inspired by demonstrations last month that paralyzed Ottawa, Canada’s capital city.

Leaders of the convoy said that on Monday they will again slowly drive the Beltway, a 64-mile highway that encircles the city, though details of when the action would take place were not known.

Hundreds of vehicles gathered on Friday and Saturday at the Hagerstown Speedway, a racetrack in Maryland about 80 miles (129 km) northwest of downtown Washington.

On Sunday morning, many left in convoy to drive two slow laps on the Beltway. They honked their horns as they set off, while onlookers waved American flags, according to a Reuters witness.

The convoy, more than 2 miles long, slowed traffic at points along the Beltway by late Sunday morning, but did not bring it to a standstill. It returned to the Hagerstown Speedway in the afternoon, according to messages on the convoy’s Telegram channel.

The convoy’s protest against vaccine requirements and other pandemic restrictions has been undercut in recent weeks as major U.S. cities have rolled back mask mandates and other measures against COVID-19 with infections and hospitalizations declining dramatically.

President Joe Biden, a Democrat, signaled in his State of the Union speech on Tuesday that the country was entering a new, phase of the pandemic without business lockdowns, school closures or other daily disruptions.

At the racetrack on Friday night, one participant who described himself as the lead trucker told a cheering crowd he would drive his truck into the heart of the American capital.

“D.C., the government, whomever, can claim that they have all this opposition for us waiting in D.C.,” the man said. “But that flag on the back of my truck will go down to Constitution Avenue between the White House and the Washington Monument.”

U.S. federal law enforcement agencies have been coordinating with state and local authorities for weeks in preparation for the possible arrival of the convoy, according to one U.S. official who requested anonymity to discuss internal operations.

A Feb. 26 U.S. Department of Homeland Security bulletin to law enforcement reviewed by Reuters said trucker convoys could hinder emergency responders depending on the size of the protest.