Learners are paying the price for Zimbabwe teachers’... 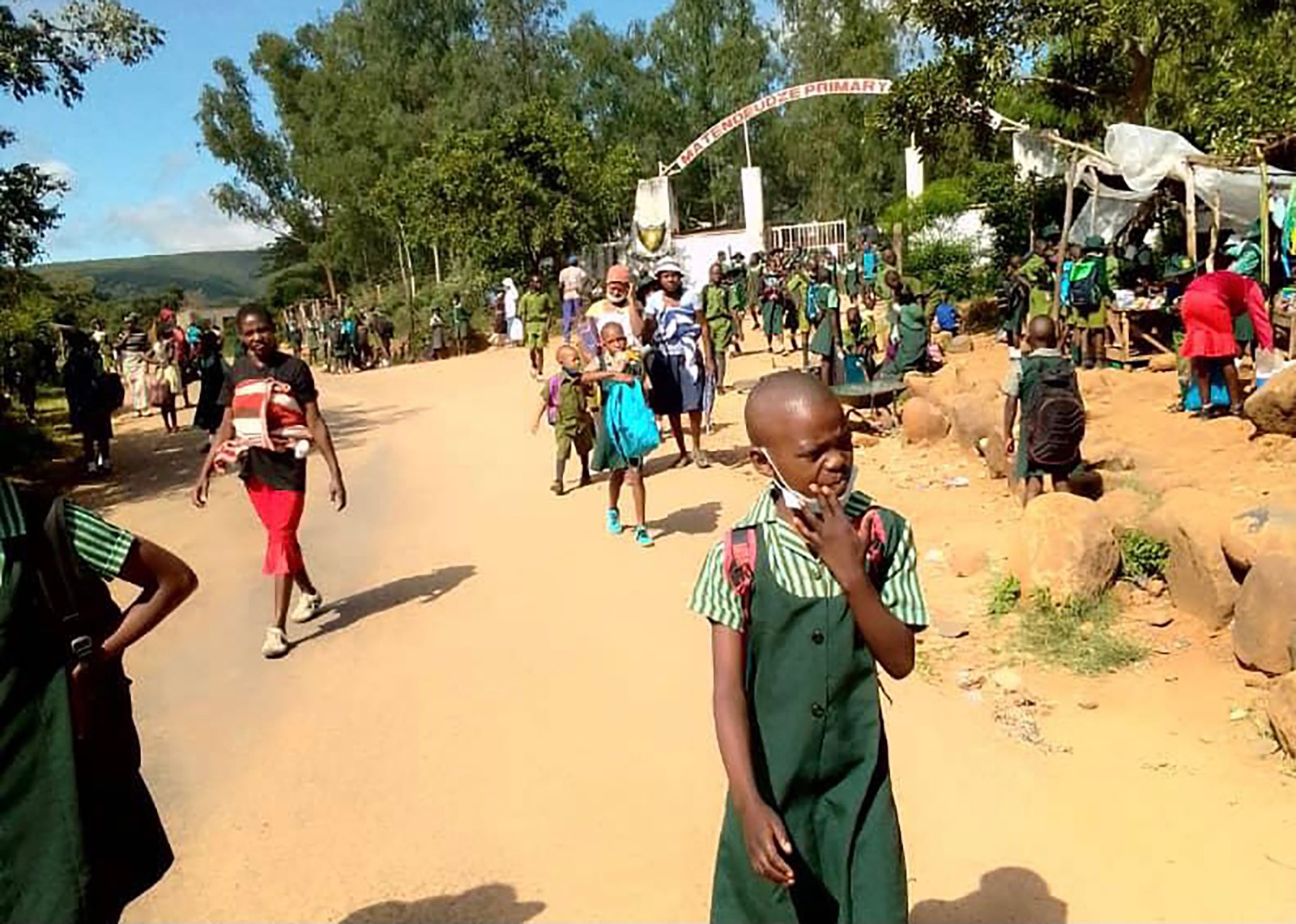 Some students leave school in Mashonaland East province. Parents had to collect their children as teachers were not conducting lessons. (Photo: Supplied)

Zimbabwe’s teachers, ‘incapacitated’ by low wages, a battered economy and Covid-19, are sticking to their demands for salary increases to 2018 levels as President Emmerson Mnangagwa digs in his heels.

The Zimbabwean government’s announcement that local schools would reopen on 7 February brought some relief to parents and learners who hadn’t been to school in three months during the Covid-19 pandemic.

However, their joy was short-lived. When schools eventually opened their doors, many children, like 17-year-old Tanatswa Kwirirai, who is doing his Upper 6th class year at a government school in Masvingo province, found themselves without teachers, who are refusing to work because of low salaries and poor working conditions.

The son of a Harare vegetable vendor, Kwirirai had hoped to pass his final examinations this year and study to become a doctor, but the absence of teachers might shatter his dreams.

“My mother is always engaged in running battles with council officials in the city centre because she sells vegetables on street corners to raise money for my school fees,” said Kwirirai, holding a soccer ball.

“I was hoping to reward my mother’s sacrifices by passing my exams and becoming a medical doctor. But now that we spend most of our time on the playground, I don’t see myself achieving my goals as we are only learning once a week due to the teachers’ strike.”

The absence of teachers has compounded the Covid-19 situation in schools.

“Because there is no monitoring of students by teachers, most students are not following the standard operating procedures of wearing masks and sanitising, and this has resulted in some students contracting Covid-19,” explained Kwirirai.

Progressive Teachers’ Union of Zimbabwe president, Takavafira Zhou, agreed that all was not well in schools when it came to safety.

“Covid-19 cases are escalating in Masvingo, Matabeleland and Midlands provinces. Chegato High School, which recorded high cases of Covid-19 last term, is at it again with five active cases of Covid-19. Given the bloated classes, lack of running water, congestion in hostels and government’s failure to provide Covid-19 abatement equipment to schools, the situation may get out of control soon,” said Zhou.

For its part, the government, through the ministry of primary and secondary education, has claimed it is doing all it can.

Zhou said President Emmerson Mnangagwa’s administration was not willing to improve salaries to where they were in 2018, when educators were earning a minimum of US$540. Currently, teachers are earning the equivalent of $175 in local currency.

“We are incapacitated… with the current salaries we can’t afford to go to our workstations every day, we can’t afford decent meals and we can’t be expected to teach other people’s children when we cannot afford to pay fees for our own children,” complained Zhou.

“We have decided that we will only work once a week; not because we don’t want to work but because we are incapacitated.”

Some parents have resorted to giving teachers cash incentives to teach.

“At my kid’s school we are paying teachers some incentives to teach and we are all in support of that for the benefit of our children,” said Washington Makwamba. “Kids have lost quite a lot in the last two years.”

Meanwhile, Mnangagwa told his supporters at a recent rally that his government would not tolerate any further debate with teachers.

“Teachers are teachers today because they were taught. If they do not return to work they will not be paid; my cabinet has since resolved that we will only pay teachers who avail themselves at their workstations,” said Mnangagwa.

Munyaradzi Majoni, secretary-general of the Zimbabwe National Union of School Heads, said that several school principals joined the boycotts because they were similarly incapacitated. He added that they would not be intimidated by the government’s threats to dismiss them.

“We are not moved by threats; we are professionals. Whatever actions our members took as a collective are legal,” said Majoni.

“We have been telling the employer that a permanent solution in solving the labour unrest in education lies in the restoration of salaries to pre-October 2018 levels. Threats and suspensions won’t work. Of course, we have advised our members that they may go back to work while we give our employer a chance to do what is correct.”

“Teachers have rejected such an insulting offer and, as much as the government has resorted to attempts to sweeten the pot with unrealistic conditions of service, the rebate of duty on vehicles is a high-sounding nothing as it is virtually impossible for teachers to buy cars on a salary that is pitiful,” said Masaraure.

Nurses have also downed tools demanding an increase in on-call allowances, salaries and other non-monetary incentives.

The crisis in the country’s workforce comes at a time when Mnangagwa is facing a general election next year.

The country’s main labour body, the Zimbabwe Congress of Trade Unions, is adamant that the country’s workers should be paid more.

ZCTU secretary-general Japhet Moyo said: “We want government to come to the negotiating table so that we can discuss issues affecting the workers. We are demanding that the lowest paid worker gets at least $600 a month or its equivalent in the local currency.”

However, the demand to be paid in foreign currency seems to be in direct conflict with the government’s plan to abandon the multi-currency system in favour of its surrogate currency, the Zimbabwean dollar, which is susceptible to runaway inflation. DM