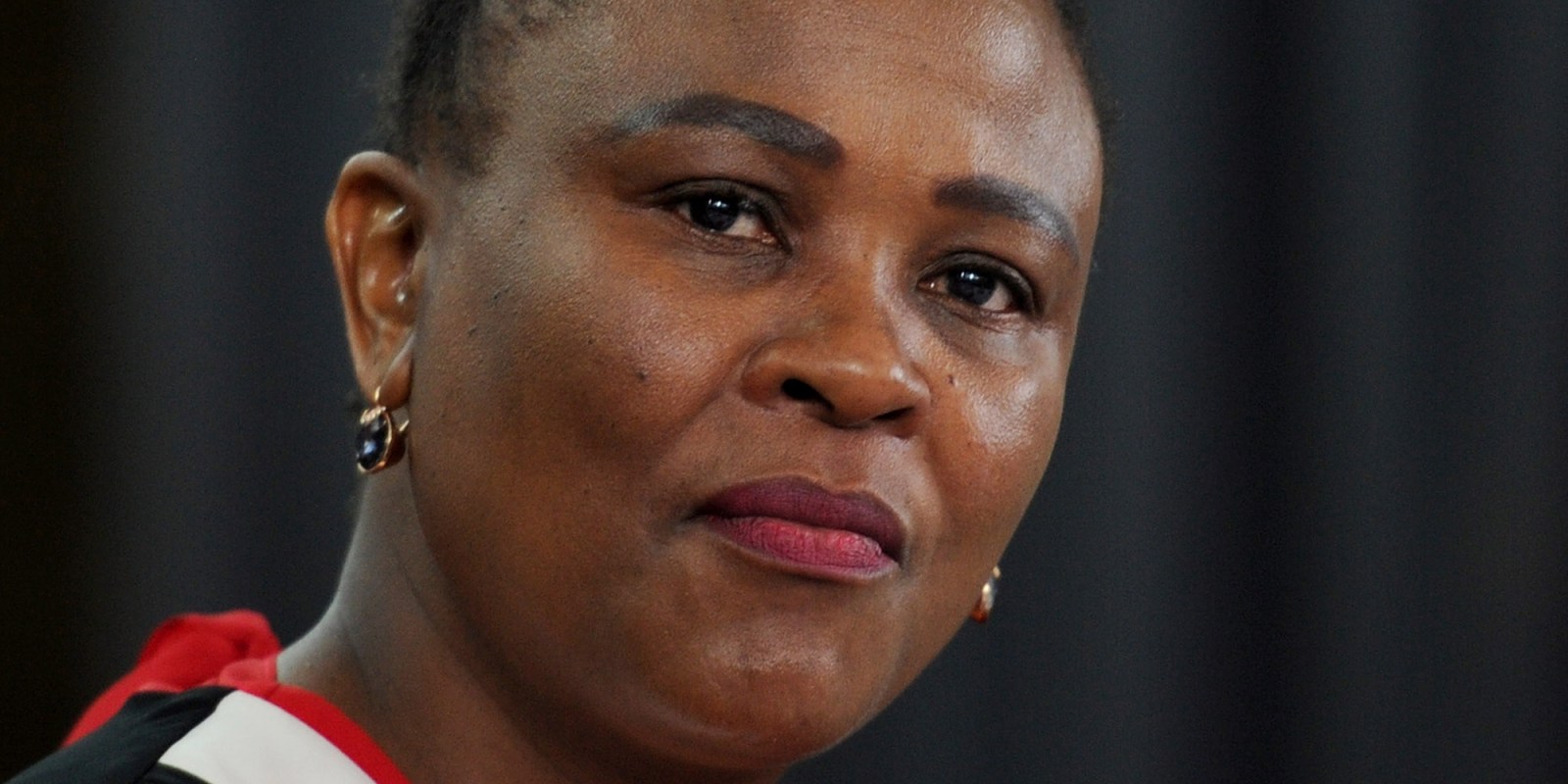 Busisiwe Mkhwebane has spent her entire controversial tenure as Public Protector living in a luxury Pretoria ministerial estate among those she is meant to hold to account.

In February 2017, four months after her appointment, Public Protector Busisiwe Mkhwebane moved into the exclusive ​​Bryntirion Estate in Pretoria, in effect becoming a next-door neighbour to embattled president Jacob Zuma and his executive. 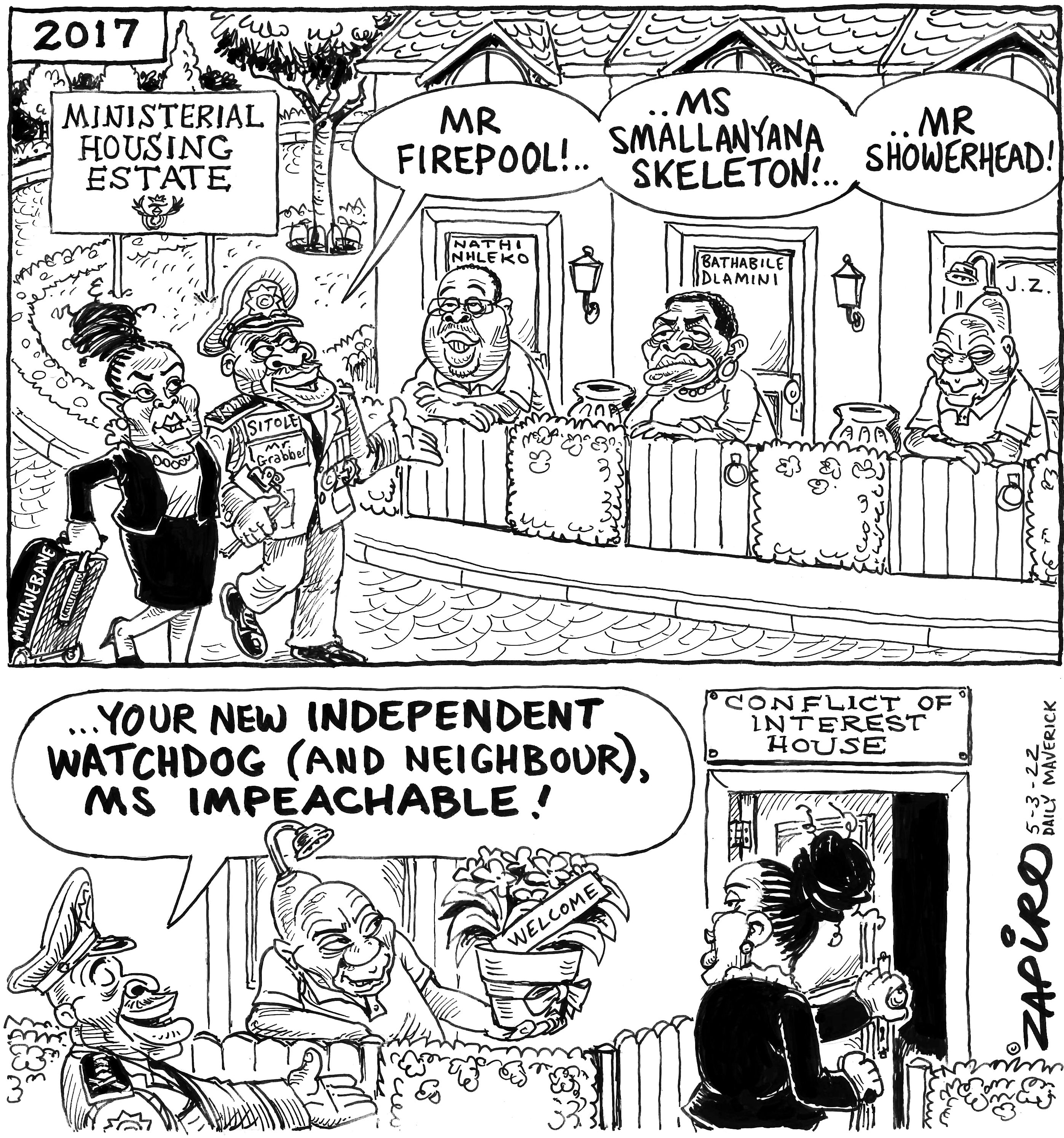 As head of a Chapter 9 institution tasked with enhancing democracy and protecting the public from executive and government abuse, Busisiwe Mkhwebane has lived among those she is employed to oversee.

Chapter 9 institutions are comparable to the judiciary, and their independence and that of their heads must be maintained at all costs. It’s in the Constitution.

As recently as mid-2021, while staring down possible impeachment and suffering defeat after costly defeat in the country’s courts, Mkhwebane relocated to a three-bedroomed duplex adjacent to the estate and reserved for deputy ministers.

From the start, Mkhwebane appears to have been welcomed into the fold as one who was meant to be there, part of the team, and has spent five years in the prestige estate with the Department of Public Works and Infrastructure as her landlord.

The Public Protector “had to be moved” to a government “flat” in 2021, Zara Nicholson, spokesperson for Minister of Public Works and Infrastructure Patricia de Lille, confirmed to DM168, after Mkhwebane’s security had been “reassessed” by the SA Police Service (SAPS) in July 2020.

According to Nicholson, the SAPS was of the opinion that “security measures in place around the Public Protector must continue” and so she relocated to the duplex. Nicholson was unable to elaborate on why Mkhwebane “had to be removed” from her previous house.

Records show the unhealthy cohabitation arrangement began in 2017 when newly appointed Minister of Public Works Nathi “Firepool” Nhleko (Minister of Police until March 2017) authorised Mkhwebane’s occupation of the house meant for a minister in the Bryntirion Estate owing to “a heightened risk level”.

Who can forget Nhleko’s spectacular sweat-inducing performance in Parliament in 2015, when he justified renovations and upgrades to then president Zuma’s home at Nkandla to the soundtrack of Pavarotti or some tenor belting out O Sole Mio?

Thanks to Nhleko, “firepool” entered the South African political lexicon of excuses. And the minister did this to discredit former public protector Thuli Madonsela’s Secure in Comfort report on Nkandla.

In 2017, the then Department of Public Works had been requested by the SAPS’s office of the divisional commissioner for protection services to “provide a secured residence for the Public Protector”.

The head of the services at the time happened to be Lieutenant-General Khehla Sitole.

He will, however, be vacating the top job “by mutual agreement” with President Cyril Rampahosa at the end of March 2022 after the Gauteng High Court found that he had breached his duties, putting the interests of the ANC ahead of those of the country.

In March 2020, four months prior to the SAPS “security reassessment” of the Public Protector’s circumstances, Mkhwebane found herself tied up in a court scrap with her new neighbour at ​​Bryntirion, Cyril Ramaphosa.

A setback was suffered when the high court reviewed and set aside Mkhwebane’s investigation and report into the “CR17 campaign”. The court also set aside the Public Protector’s findings and remedial action, and ordered her to pay costs. It was one of many bills in her growing pile of cost orders.

Mkhwebane, the court found, had “misconceived” the executive ethics code by finding that, by providing an incorrect reply to Parliament with regard to his campaign funding, Ramaphosa had breached the code. Mkhwebane and the EFF took it to the Constitutional Court but lost.

He did not respond to this question.

The threats in 2017 certainly appear to have been serious enough for the matter to be bumped upstairs to Sitole’s office.

Segalwe told DM168 that the bulk of our questions about the accommodation “fall within the purview of the SAPS”.

“[The Public] Protector is a client of the SAPS, specifically the VIP Protection and Security Services division. Accordingly, the matter of her residence was arranged in terms of SAPS protocols and not the Ministerial Handbook. Needless to say, she is not subject to the Ministerial Handbook by virtue of not being a member of the executive. It follows, therefore, that she cannot violate a policy that does not apply to her,” said Segalwe.

Mkhwebane has currently signed a lease with the Department of Public Works and Infrastructure (DPWI) and pays rent, Nicholson confirmed to DM168. The rental amount has not been disclosed.

The Public Protector receives the salary equivalent to that of a Supreme Court of Appeal judge, which is about R2.3-million a year.

Former public protector Thuli Madonsela told DM168 that a housing allowance or government housing had not been part of her contract.

Whether – as an advocate and public servant – Mkhwebane should have been aware of the conflict of interest the living arrangement presents to the independence of her office, Segalwe said: “Regarding alleged conflict of interest, the Public Protector gets its budget from the National Treasury, appropriated through the Department of Justice and Constitutional Development. Moreover, all of the Public Protector’s 18 offices, including head office, are either rented through the DPWI or the DPWI itself pays for the rental.”

Mkhwebane’s right to accommodation fell within Regulation 15(1) of the Judges’ Remuneration and Conditions of Employment Act, 2001, said Segalwe, in which the state, through the DPWI, “is called upon to provide official accommodation for the head and deputy head of the judiciary”.

We don’t see the Public Protector mentioned there, though.

[Selgawe has since pointed out to the DM that he quoted the above regulation more as a suggestion “that the state’s provision of accommodation to the PP through the DPW is not different to that the same department is called upon to provide for the head and deputy head of of the judiciary in terms of the regulation in question. This was for purposes of drawing parallels between the two in relation to the alleged conflict of interest not to suggest that the regulation in question makes provision for the PP”].

He suggested that DM168, by nature of our questions, “might be in possession of a lease agreement which contains specific information about the Public Protector’s residential address”.

We can assure Segalwe and the Public Protector that the only information in our possession is what the Department of Public Works is entitled to share with the media and which the public is entitled to know. DM168

This story was updated post-publication to include additional comments from Oupa Segalwe. 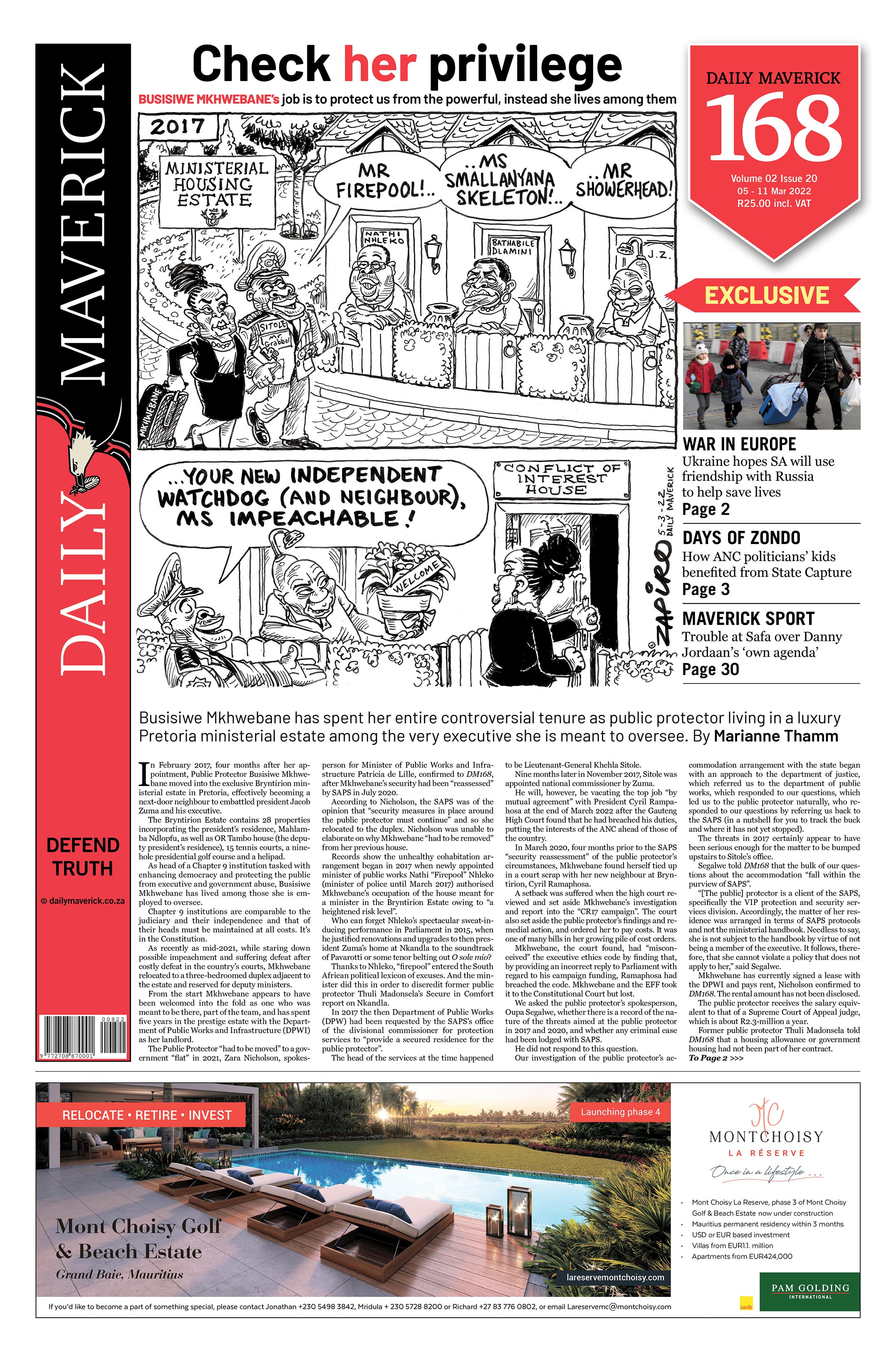