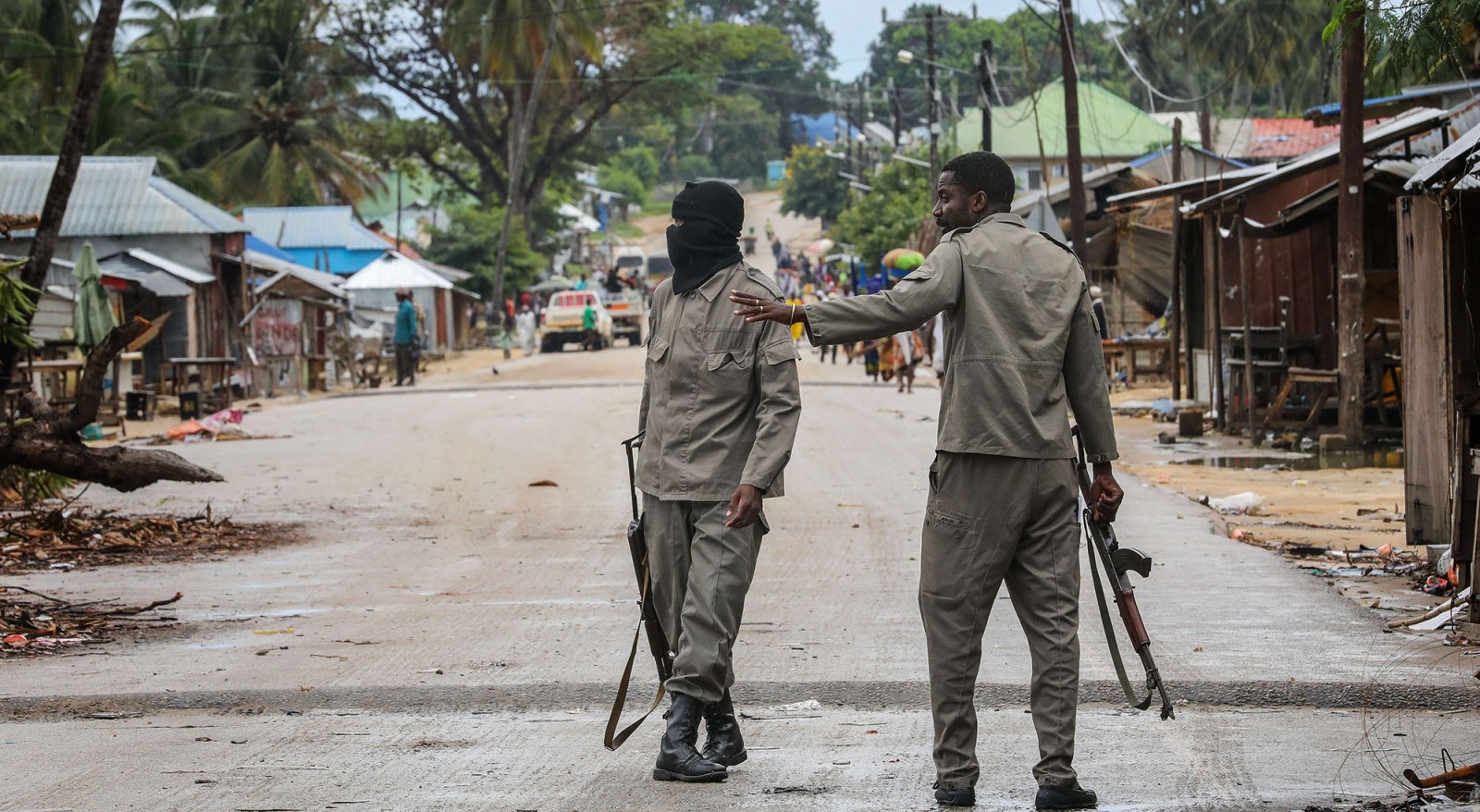 Mozambique army soldiers on patrol in Palma, Cabo Delgado, Mozambique, on 12 April 2021. ISIS-Mozambique threatened in 2020 to retaliate against South Africa if it sent troops into Cabo Delgado to eliminate the insurgency. (Photo: EPA-EFE / Joao Relvas)

Was the decision partly motivated by a need to jolt Pretoria into action against terrorism on its turf?

Was the US Treasury’s announcement that it was imposing sanctions on four alleged organisers and financiers in South Africa of the Islamic State of Iraq and Syria (ISIS) a wake-up call for South Africa?

The capacity of the country’s State Security Agency and the South African Police Service has been so weakened, including by State Capture, that their ability to detect and warn of ISIS threats has been severely compromised. And some are prone to downplay such a threat for ideological reasons. So it seems to have been left to the US to sound the alarm.

The US designated four “Islamic State of Iraq and Syria (ISIS) and ISIS-Mozambique (ISIS-M) financial facilitators based in South Africa”. Financial sanctions were slapped on Farhad Hoomer, Siraaj Miller and Abdella Hussein Abadigga for “playing an increasingly central role in facilitating the transfer of funds from the top of the ISIS hierarchy to branches across Africa” or serving as leaders of ISIS cells in South Africa.

Meanwhile, it said one Peter Charles Mbaga had helped transfer funds and equipment from South Africa to ISIS-M and sought to procure weapons from Mozambique.

“Treasury is taking this action to disrupt and expose key ISIS supporters who exploit South Africa’s financial system to facilitate funding for ISIS branches and networks across Africa,’ said undersecretary of the Treasury Brian Nelson. “The United States is working with our African partners, including South Africa, to dismantle ISIS financial support networks on the continent.’

He said ISIS had recently tried to expand its influence in Africa through large-scale operations in areas where government control was limited. “ISIS branches in Africa rely on local fundraising schemes such as theft, extortion of local populations, and kidnapping for ransom, as well as financial support from the ISIS hierarchy.”

Of the four targeted men, only one name is slightly familiar in South Africa – Hoomer. In 2018, he and 10 other members of a Durban ISIS cell he led were indicted for attacking the Imam Hussain Shi’a mosque in Verulam, murdering a congregant, injuring others, and planting incendiary devices. The cell’s modus operandi was kidnapping for ransom and extortion. The case was struck off the roll in 2020, apparently because of inept prosecution.

Hoomer was arrested again in July 2021 with five other men in Durban and charged with unlawful possession of firearms, ammunition and suspected stolen property after a house in the city was raided. That case was also withdrawn about a week later, supposedly for lack of evidence.

Hoomer’s name has also cropped up in media reports as the possible financier of the legal defence in two other ISIS-linked cases. One was that of twin brothers Brandon-Lee and Tony-Lee Thulsie. They were sentenced to prison last month on terrorism charges for trying to leave South Africa in 2015 to join ISIS in Syria and for conspiring to attack Jewish and foreign interests in South Africa.

Hoomer is also rumoured to be financing the defence of three alleged ISIS members charged with the kidnapping, armed robbery and murder of two British botanists in the KwaZulu-Natal countryside in 2018. The case is pending.

Government officials say one of the members of Hoomer’s cell was among five men arrested in Johannesburg in July 2020 and charged with running a kidnapping syndicate. This was also presumed to be an operation to extort ransoms to fund ISIS.

The US Treasury statement added that Hoomer claimed to have recruited and trained cell members and was in contact with ISIS-Democratic Republic of the Congo members and ISIS supporters throughout South Africa.

“Hoomer raised funds through kidnap-for-ransom operations and extortion of major businesses, which provided more than [R1-million] in revenue for his cell,” Treasury said. Hoomer condemned the sanctions against him on Wednesday, saying they were unjustified as he hadn’t been convicted of anything.

The Treasury’s information about the other three men sanctioned was a revelation. It said Miller led a Cape Town-based group of ISIS supporters and “has provided financial assistance to ISIS by training members to conduct robberies to raise funds for ISIS. In 2018, Miller also aided in acquiring temporary safe houses for ISIS.”

Abadigga had recruited young men in South Africa and sent them to a weapons training camp, the Treasury said. He allegedly controlled two mosques in South Africa, using his position to extort money from members. He sent these funds to ISIS supporters elsewhere in Africa, and helped ISIS organise and recruit members in South Africa, it said.

The Treasury statement reinforced existing evidence or suspicion of links between Islamic State in South Africa and Mozambique. Several South African ISIS sympathisers are believed to have joined ISIS-Mozambique as combatants. ISIS-M threatened in 2020 to retaliate against South Africa if it sent troops into Mozambique’s Cabo Delgado province to eliminate the insurgency. A year later, South Africa did send soldiers as part of the Southern African Development Community intervention force.

Presumably then, the links between ISIS-M and ISIS in South Africa revealed in the Treasury indictment – such as Mbaga trying to procure weapons from Mozambique – could suggest avenues for such retaliation.

The Treasury said it was cooperating with local authorities, and South Africa’s finance and justice ministries confirmed that. But the fact that the US seems to be ahead of South Africa in this investigation raises some questions and potential problems.

Martin Ewi, a senior researcher at the Institute for Security Studies (ISS), fears that by going public before South African authorities had arrested the suspects, the US might have compromised local investigations. “The financing of terrorism is a serious criminal offence under South Africa law. It is better for the US government to share information or evidence with the South African government with a view to bringing suspects to justice.

“Blacklisting is not a democratic tool and should only be used once such individuals are found guilty or don’t cooperate with law enforcement agencies,” Ewi says. He cautions against simply taking the US Treasury at its word about the guilt of these four men, noting previous tensions in 2007 over US moves to sanction South Africans allegedly linked to al-Qaeda.

He is also concerned about a backlash from the South African Muslim community, which might feel aggrieved that fellow Muslims are being targeted by the US based on uncertain evidence.

However, Justice Department spokesperson Chrispin Phiri told ISS Today that South African authorities weren’t motivated by religious affiliation or nationality but simply by the alleged activities. He said the government had to protect South Africa against terrorism and prevent its territory from being used to fund terrorism elsewhere. “Part of that is collaborating with any international organisation or state that suspects that these activities are taking place in our country.”

That is reassuring, though suspicions remain that not all of South Africa’s relevant government departments – in particular police and intelligence – are fully on board regarding the US collaboration.

In theory, Ewi may be right that sanctions should not precede arrests. But in the less-than-ideal world of South African law enforcement, perhaps the only realistic option was for the US to act first to jolt local law enforcers into action. DM