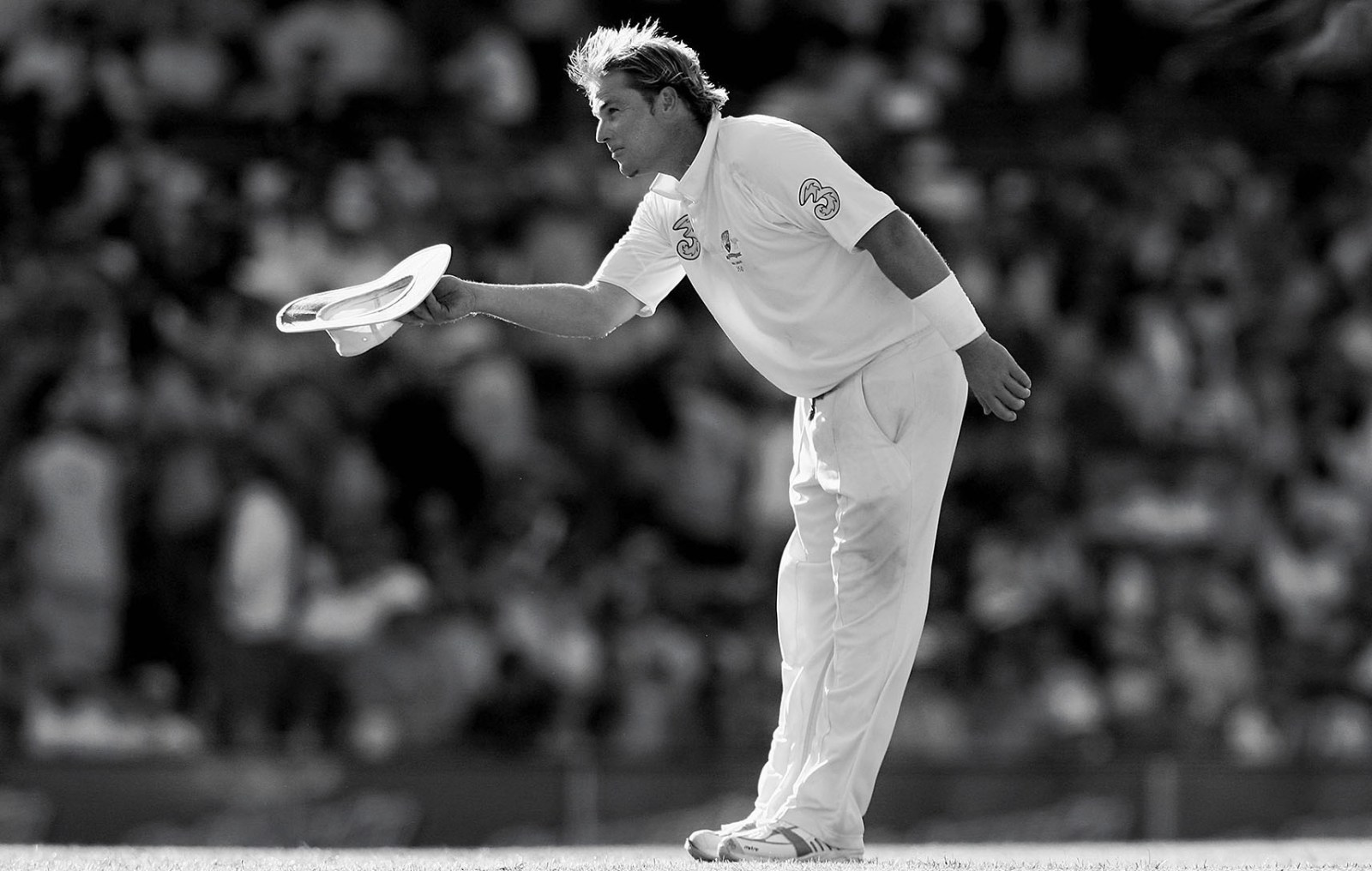 Shane Warne of Australia bows to the crowd at the end of day three of the fifth Ashes Test Match between Australia and England at the Sydney Cricket Ground on 4 January 2007 in Sydney, Australia. Warne died of a suspected heart attack in Thailand. (Photo: Mark Nolan / Getty Images)

Shane Warne, who reinvented the art of leg spin bowling, has died of a suspected heart attack in Thailand at the age of 52.

The word “genius” is overused in sport and bestowed upon too many excellent, but not transient athletes. In the case of Shane Warne however, the term is apt because he displayed a once-in-a-lifetime ability as a bowler.

Warne was a terroriser of batters for 15 years at the highest level of the game, and one of the players who thrived on former skipper Steve Waugh’s policy of “mental disintegration” against opponents.

Waugh not only wanted his team to win matches, but to pound their opponents with every weapon in their arsenal, which included verbal volleys. And Warne was one of the few who matched his skill with the ball, with that of his mouth.

Facing Warne was not only a test of batters’ skill, but of his mental strength and technique. Warne was always at them, whether bowling, or standing in the slip cordon, dispensing “advice” to opposition batters, sometimes using choice words.

In 2007, Warne said to England’s Paul Collingwood, who had received an MBE for winning The Ashes in 2005, “You have an MBE, right? For scoring seven at The Oval? That is embarrassing.”

As a fierce competitor, he was a nightmare, but after the day’s play he was always one of the first from the Australian dressing room to share a cold beer with an opponent.

Warne, who ended his spellbinding international career in 2007 with a remarkable 708 Test wickets, died from a suspected heart attack in Koh Samui, Thailand, his family confirmed in a statement.

“Shane was found unresponsive in his villa and despite the best efforts of medical staff, he could not be revived,” the statement read. “The family requests privacy at this time and will provide further details in due course.”

Thai Police said they were not treating the death as suspicious.

His death comes hours after another former Australian cricket great, wicketkeeper Rod Marsh died on Friday at the age of 74. Warne’s last post on Twitter, 12 hours before his death was reported, was a tribute to Marsh:

“Sad to hear the news that Rod Marsh has passed. He was a legend of our great game & an inspiration to so many young boys & girls. Rod cared deeply about cricket & gave so much – especially to Australia & England players. Sending lots & lots of love to Ros & the family,” Warne wrote.

Credited for reviving the art of leg spin, Warne made his Test debut in 1992 against India. And by the time he ended his 15-year international career, he had established himself as one of the all-time greats of the game.

He also had 293 wickets from 194 one-day internationals and won the man-of-the-match award when Australia beat Pakistan in the 1999 World Cup final.

In 2000, he was rated among the five greatest cricketers of the 20th century by Wisden, alongside Sir Donald Bradman, Sir Garfield Sobers, Sir Jack Hobbs and Sir Viv Richards.

Warne was one of the game’s prominent crowd-pullers, whose craft as well as lifestyle often made headlines.

The wily spinner frequently courted controversy and served a 12-month ban after testing positive for banned diuretics in 2003.

Often called the best captain Australia never had, he inspired Rajasthan Royals to the inaugural Indian Premier League title in 2008.

He also played in numerous Ashes series against England, taking 195 wickets against the old foe. But he also loved England, and spent eight seasons playing for Hampshire from 2000 to 2007.

His great Indian rival Sachin Tendulkar was “shocked, stunned & miserable” at the death of the Australian stalwart.

“Unbelievable. I am shocked to the core. This can’t be true… Rest In Peace, @ShaneWarne. There are no words to describe what I feel right now. A huge loss for cricket,” he wrote.

Australia opener David Warner, currently playing in Pakistan, summed up the mood in the country.

“Two legends of our game have left us too soon. I’m lost for words, and this is extremely sad. My thoughts and prayers go out to the Marsh and Warne family. I just cannot believe it. #rip, you will both be missed,” he tweeted.

The ‘ball of the century’

With a single twist of his right wrist on an early summer day at Old Trafford in 1993, Warne not only bamboozled England’s batsman Mike Gatting with the so-called “ball of the century” but also revived the noble art of leg spin.

The bleached blonde-haired Warne arrived on that tour of England relatively unknown outside Australia and with fairly unspectacular figures from his first 11 Test matches.

All that changed in an instant on the second morning of an Ashes series in which Warne took an incredible 34 wickets in Australia’s 4-1 drubbing of the hosts.

With England having made a solid start in reply to Australia’s first innings 289, captain Allan Border handed the ball to Warne.

After loosening up his arm and surveying where his fielders were positioned, Warne began his ambling run-up off no more than 10 paces at almost walking pace.

The beautifully flighted delivery initially appeared to be heading straight but began to drift through the air towards the right-handed Gatting – a vastly experienced batsman known for his expertise against spin bowling.

The ball pitched a foot outside the line of Gatting’s leg stump, and with the batsman thrusting his left pad forward with his bat angled down, it gripped in the dust.

It then spat and bounced back at a 45-degree angle, ripping past the edge of Gatting’s bat, and hitting the top of off stump.

Richie Benaud, the great Australian commentator working for the BBC, seemed as bemused as Gatting, as his initial reaction was as if he had witnessed just an everyday dismissal.

“He’s done it,” Benaud said after a brief silence, before adding, “He’s started off with the most beautiful delivery.

“Gatting has absolutely no idea of what’s happened to him.”

As a smiling Warne was congratulated by his teammates, Gatting began the long walk off, looking back over his shoulder at his tormentor and shrugging his shoulders in resignation.

With a single, extraordinary, delivery, Warne cast a spell over England and by the end of the innings he had also accounted for Robin Smith, Graham Gooch and Andy Caddick as the hosts capitulated to 210 all out.

Gooch later described Gatting’s reaction as “like someone had just stolen his lunch”.

Gatting scored 4,409 Test runs and is one of England’s greatest batsmen, but for many the most memorable moment of his career was when he unwittingly became part of cricket folklore.

The 64-year-old said he was “absolutely devastated” by Warne’s death on Friday.

Asked once more to recall “that” ball, Gatting told Sky Sports: “I didn’t expect it to spin that much, I’m not sure he did when we spoke about it.

“He just said he tried to get it down the other end as best as he could. Well, it was a bit too good for me, as he was for many others who suffered the same fate.

“He always said ‘thanks mate for starting off my career’.”

Whenever asked about “the ball” Warne modestly insisted it was “a bit of a fluke”. But he was not fooling anyone.

It was merely the opening piece of magic from a cricketing wizard who went on to take 708 test wickets – a figure only bettered by Sri Lanka’s Muttiah Muralitharan – and made leg spin bowling cool again. DM/Reuters