The women on the side of the road – surviving on scra... 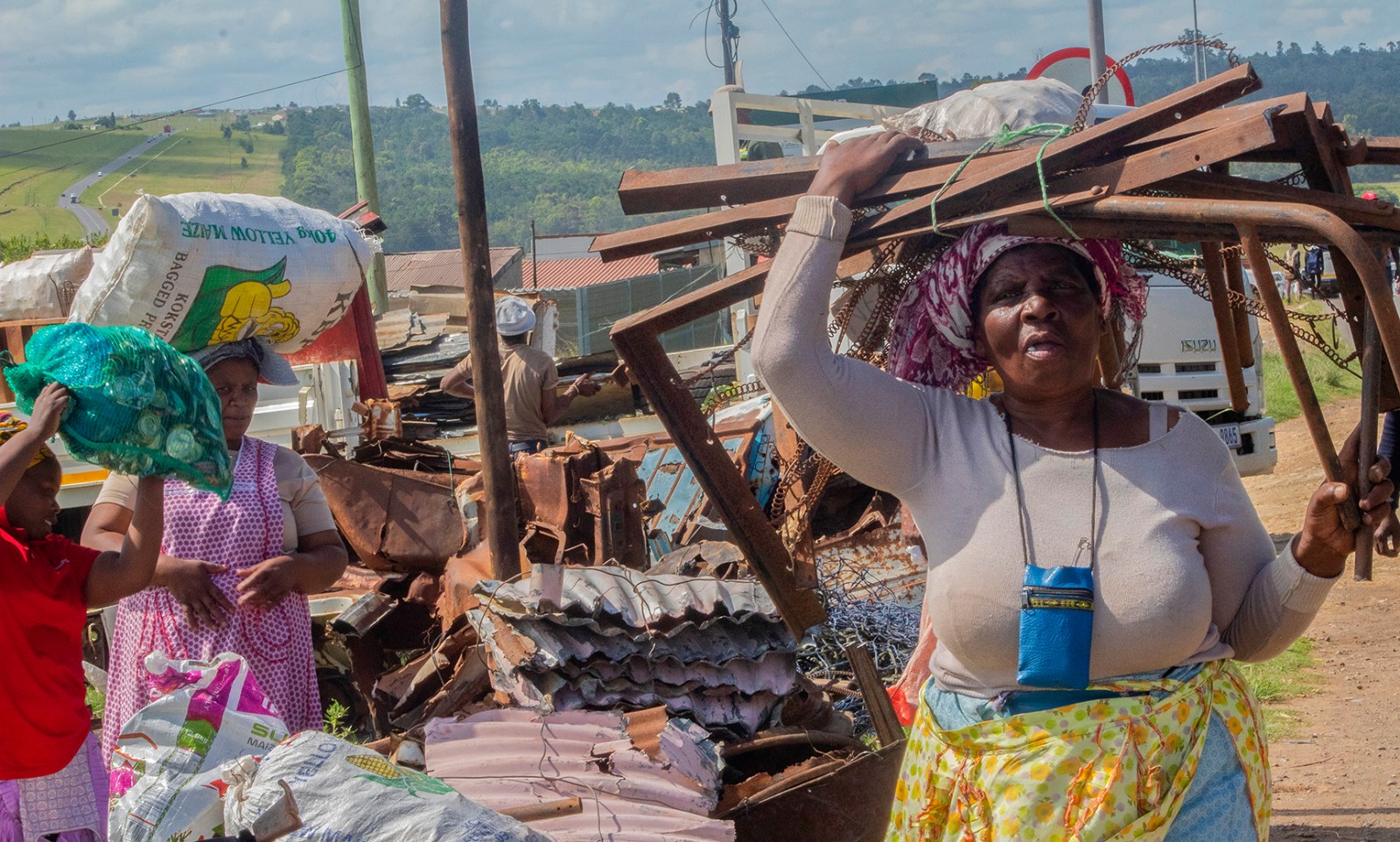 Nodanile Dlabongo (60) carries her collection of scrap metal next to the N2 in Qumbu, Eastern Cape. She has resorted to recycling to make ends meet. ( Photo: Hoseya Jubase)

In a desperate battle to survive, groups of elderly women are sleeping on the side of the N2 highway for up to a week at a time, guarding the scrap metal they have collected while they wait for a lift to Durban so that they can sell it.

Outside the village of Qumbu in the Eastern Cape, trucks headed to KwaZulu-Natal will meet groups of women at the side of the road to pick up the scrap metal they have collected. The drivers take the women to Durban where they try to make a little cash selling the metal.

Expensive transport and high unemployment rates have driven these rural women to risk their lives sleeping alongside the N2 between Mthatha and Qumbu, waiting for a ride.

While waiting for a ride to come along, and to protect their precious recyclables, they often sleep on the side of the road for as long as a week. When it rains at night, they cover themselves with plastic sheets and in the morning they use tin cans to boil water and to wash.

The women we spoke to said they were doing it for their children and grandchildren, as even their grown-up kids couldn’t find jobs. This has become a way to put food on the table. While some of them receive social grants, the money runs out fast as entire households are dependent on this money.

“We have to pay for scholar transport and stationery for our kids. We also have a responsibility to look after those who completed their studies but are not getting jobs, and we must buy food,” said Novulile Nyingwa.

This year, more than 3,000 schools received their stationery late or not at all. The Eastern Cape education department said it was experiencing unprecedented financial problems.

Nyingwa, who began collecting waste materials more than seven years ago, said some of the women paid more than R2,000 a month for scholar transport.

To get the plastic bottles and scrap metals to Durban from Qumbu, the women pay R500 a trip. Others pay R700 from their villages to Qumbu. Some travel to Durban twice a month.

“We are playing a win and lose game here because sometimes we get a lot of money and sometimes we return with peanuts,” Nyingwa said.

Ntombozuko Mbalane (49) has seven children and no other income apart from the government’s monthly R350 social relief grant. She says all her children are at school or university and she is trying her best to keep them there.

“When we apply for a job, we are told that we are too old… that they only take those between 18 and 36 years. I then decided to risk my life in order for my kids to finish school. We are doing this to secure the future of our children.”

Mbalane said she spent about R2,000 on a trip to Durban to sell the waste materials she collects.

“We are pleading with the government to assist us with transportation so that we can avoid having to sleep on the road.”

Mbalane said the R350 grant is not enough and she is hoping the government will increase it and make it permanent.

Nobongile Dlabongo (68) said sleeping beneath scrap metals at night is a form of abuse.

“We are using plastic bottles in order to wash in the morning… sharing a loaf of bread every day.

“Some of us, including me, do have social grants, but no one is working at home. Everything depends on this grant, which is not enough to sustain our family. The most painful part is that our children have qualifications but are not getting jobs.”

A study published by human rights organisation Black Sash, looking into the impact of the social relief of distress grant, found that R350 was too little to meet the monthly needs of every recipient they interviewed.

“Many of the people we interviewed talked about food shortages. Their households had to engage in various strategies to make what food they had, last longer. Such strategies included meal rationing and skipping meals,” the study said.

“Although the R350 was not enough to make households and beneficiaries food secure, those who did not receive it, and those who received it late, experienced hunger and food insecurity more frequently. Recipients often wished that the government would provide at least R500.”

Even R500, however, would fall R85 short of the price of the recommended food basket for 2020, and food prices have since increased dramatically.

The Black Sash report added that it was “particularly insidious” that the SA Social Security Agency required that those who claimed grants had zero money coming into their bank accounts.

“Because the money was below basic food requirements, grant recipients had to rely on other family members to assist with their minimum caloric needs… To penalise people for a small amount of income, by denying them their Covid-19 grant for the month, was not appropriate,” the report said. DM/MC

Putting hell into health: The people of Nelson Mandela Bay deserve better than this