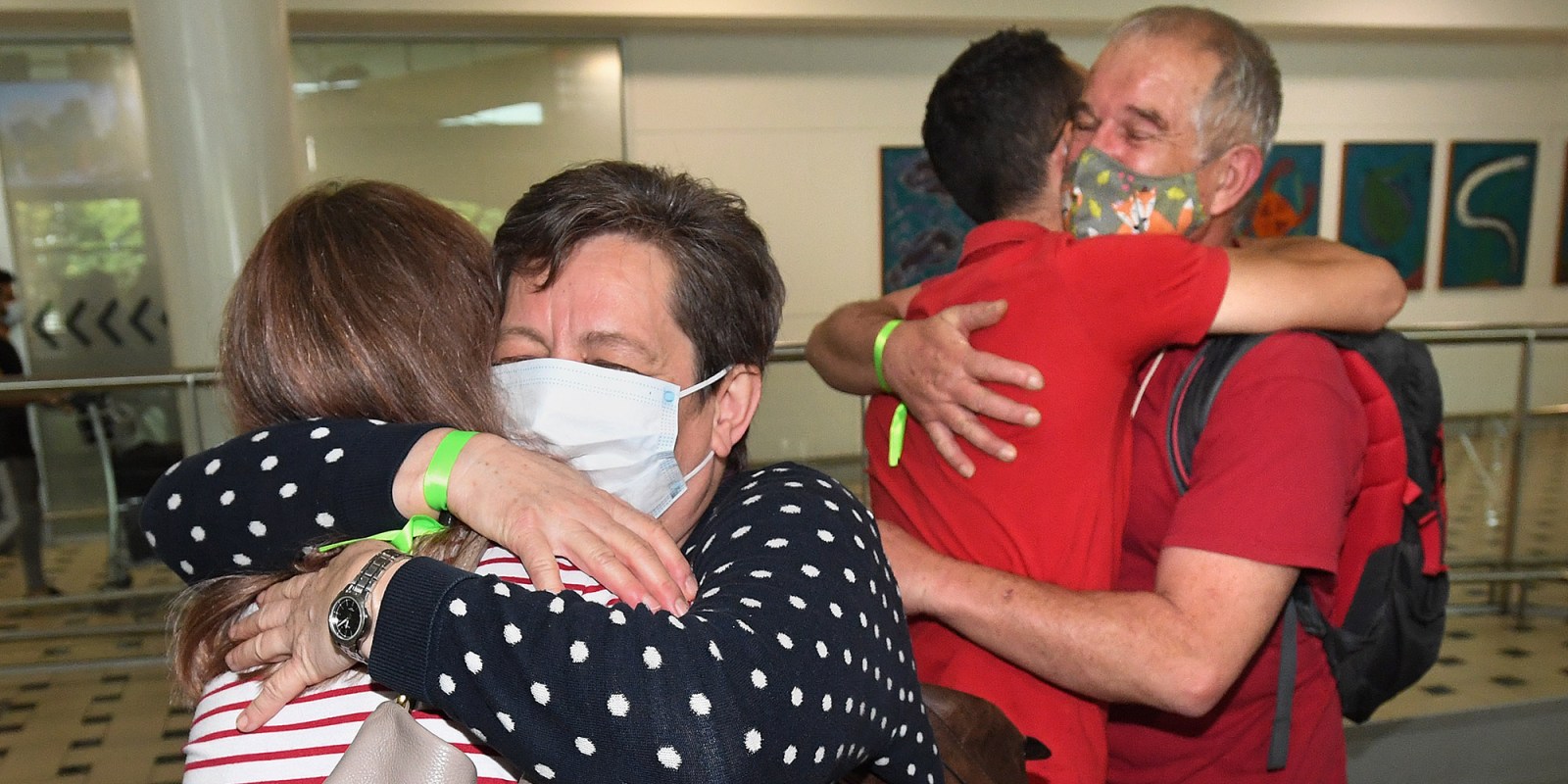 Passengers are greeted as they arrive at Brisbane International Airport in Australia on 21 February 2022. Australia's international borders have reopened for fully vaccinated tourists and travellers. (Photo: EPA-EFE / DARREN ENGLAND)

Singapore’s weekly infection growth rate is falling for the first time since early January. Malaysia and Indonesia are adding fewer cases each day after a February spike, an early sign that the Omicron wave may have peaked.

The Omicron strain is at least 40% more lethal than seasonal flu, according to a Japanese analysis.

Western Australia finally reopened its borders to vaccinated travellers on Thursday, after almost two years of closures that were intended to stamp out the coronavirus. That means the entire continent is now once again open to tourists and foreign workers. 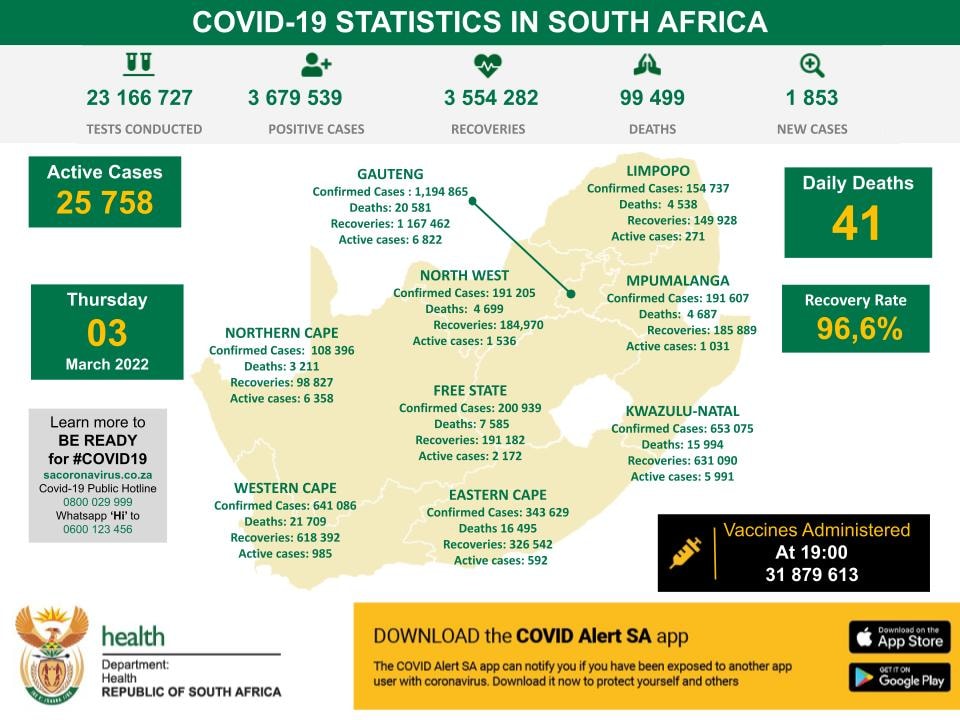 The Japanese government plans to extend Covid-19 measures in 18 prefectures including Tokyo until March 21, Yomiuri newspaper has reported without attribution.

Requests for restaurants and bars to close early and limits on event attendance had been slated to expire on March 6.

The Omicron strain of Covid-19 is at least 40% more lethal than seasonal flu, according to Japanese scientists, underscoring the potential danger of lifting pandemic curbs too quickly and underestimating the virus’s ongoing health risks.

Countries around the world have been relaxing mitigation measures in the face of the milder Omicron strain, as the public has grown tired of restrictions. Read the full story here.

The entire Australian continent is once again open to vaccinated tourists and foreign workers after Western Australia reopened its borders on Thursday. The state’s strict travel bans were in place for almost two years.

The move brings Western Australia in line with most of the rest of the world, leaving just Hong Kong and China with effectively closed borders and strict quarantine regimes. New Zealand, which has also retained a hard border, is due to open to Australians by July and to all other tourists by October.

Just 15% of elderly residents in Hong Kong’s care homes are fully vaccinated against Covid-19, about one-sixth the coverage in the US. The vaccination rate for other seniors in the city is higher, at 45%, which still significantly lags many advanced economies.

The low rate of vaccination in care homes leaves residents even more vulnerable as the number of Omicron cases soars, a forecast from researchers at the University of Hong Kong found. Read the full story here.

Malaysia, Indonesia may be past Omicron peak

Malaysia and Indonesia are adding fewer Covid-19 cases each day after a sharp spike in February, an early sign that the Omicron wave may have peaked.

The countries are preparing looser entry restrictions to get a jump start on travel. Still, both governments have said it is too soon to sound the all-clear and are urging citizens to get boosted. Insufficient testing may have partly contributed to the dip in daily cases.

New Zealand is considering ways to limit access to Parliament, including potentially building a wall, to prevent a repeat of the three-week protest camp that resulted in extensive damage to the grounds in downtown Wellington.

The camp began as a protest against Covid vaccine mandates and other restrictions but grew as other causes joined in, leading to abuse of passersby and journalists, and threats of violence against politicians. Police yesterday forcibly ejected the remaining occupants and their supporters, leading to violent clashes in nearby streets. Read the full story here.

Singapore’s weekly infection growth rate, which compares the number of community cases in the past week to the one before, dropped below one to 0.98, according to Ministry of Health data. A number lower than one means the growth rate is falling.

It is the first time the rate has been less than one since early January. The number of new local infections, including those detected through rapid testings, fell to 18,999 as of noon on Wednesday, from 23,891 on Tuesday.

Health officials offered more details on the administration’s National Covid-19 Preparedness Plan at an event on Wednesday, the first press briefing that saw Biden’s senior health aides gather maskless, in-person and sitting side-by-side in a symbolic nod to diminishing risks. The plan will require near- and long-term funding, the officials said, without specifying amounts.

In his Tuesday evening State of the Union Address, Biden said the administration would launch test-to-treat centres at pharmacies, where people can immediately receive Covid-19 antiviral therapy if they test positive. He also announced an expanded supply of Pfizer’s Paxlovid pills for this month and said US households would soon be able to order another free batch of tests from the government.

Greece will end the compulsory wearing of masks in outdoor spaces starting on March 5, Health Minister Athanasios Plevris said. The government strongly recommended continued use of masks in crowded outdoor areas as well as by people who are at risk of serious illness or are unvaccinated, he said.

In Turkey, Health Minister Fahrettin Koca announced the easing of social-distancing measures after a meeting of the Coronavirus Science Board. Masks won’t be mandatory outside, or indoors if air conditioning is adequate.

Masks are no longer required indoors at the Pentagon based on the new Centers for Disease Control and Prevention guidelines, although people will still be allowed to wear them if they choose to.

The Pentagon also shifted to a health-protection level that allows larger gatherings and more options for seating in the food court.

China, the last major country to stick with a zero-tolerance approach to Covid, is exploring ways to loosen controls, the Wall Street Journal reported, citing people familiar with the matter.

Officials are looking into the use of travel bubbles, collecting data on new antiviral drugs and scouting sites abroad for future production of homegrown Chinese messenger RNA vaccines, the newspaper said, citing the people.

Rates of anxiety and depression rose by about 25% worldwide in the first year of Covid, another indication of the widespread harm on mental health inflicted by the pandemic.

Young people were at the greatest increased risk of suicide and self-harm, and women bore the brunt of the emotional and psychological burden, according to a report from the World Health Organization. People with chronic conditions such as asthma or cancer were also more likely to develop symptoms of mental disorders during the outbreak. DM/MC