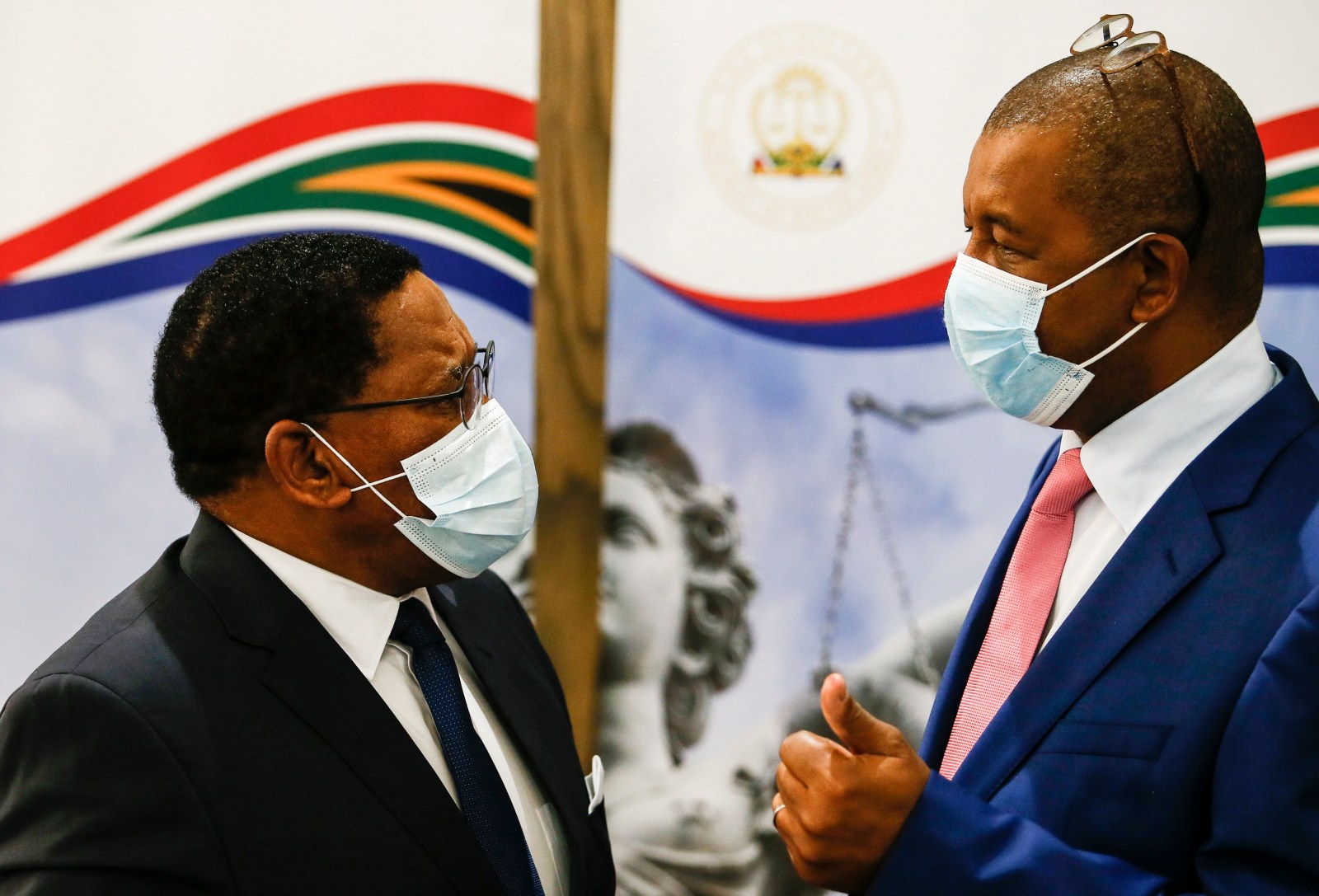 Deputy president of the supreme court Xola Mlungisi Petse and Commissioner Dali Mpofu at the interviews of the Chief Justice of South Africa held in Sandton on 2 February 2022. Photo:Felix Dlangamandla/Daily Maverick

Civil society groups have long called on the Judicial Service Commission to set explicit criteria to apply when it considers the appointment of judges. Following the farcical Chief Justice interviews, nine groups want the commission to stop its interviews until it publishes its criteria and a code of conduct for members.

The Judicial Service Commission (JSC) has made various attempts at grappling with the criteria it uses to recommend the appointment of judges. The JSC is bound by the Constitution to pursue the goal of appointing “appropriately qualified” and “fit and proper” judges while also pursuing gender and racial transformation.

The Council for the Advancement of the South African Constitution (Casac), Freedom Under Law and Judges Matter have unpacked three attempts by the JSC to interpret “appropriately qualified” and “fit and proper” – the criteria that should guide interviews for judicial appointments. While vague, the criteria include characteristics such as integrity, experience, motivation and competence. The last time such criteria were publicly released was during Chief Justice Sandile Ngcobo’s term in 2010.

The current JSC appears to have made no real effort to list and publicly release the criteria it uses to assess judicial nominees – and it shows. It agreed to rerun interviews for Constitutional Court vacancies last year after members failed to engage meaningfully in the process, which was heavily politicised.

Last month’s interviews for Chief Justice, a position that not only leads the Constitutional Court but the entire judiciary, were derailed as JSC members prioritised political point-scoring. The JSC gave the nod to Supreme Court of Appeal President Mandisa Maya after days of hearings defined by sexism towards Maya and unsubstantiated rumours of sexual harassment against Gauteng Judge President Dunstan Mlambo.

“Far from assisting and protecting the courts to ensure their independence, impartiality, dignity, accessibility and effectiveness, as the JSC is constitutionally enjoined to do, these most recent interviews can only have diminished public confidence in the administration of justice,” they said.

The nine groups have asked the JSC to halt interviews for judicial appointments until it publishes explicit criteria on what constitutes “appropriately qualified” and “fit and proper” to guide the assessment of the eligibility of candidates. They also want the JSC to publish a code of conduct for its commissioners and the JSC chairs. The next round of interviews is scheduled for April and includes two positions for the Constitutional Court.

“These criteria need to reflect engagement with the constitutional imperative that the judiciary reflects broadly the racial and gender composition of South Africa within the wider context of securing a transformed, diverse and representative judiciary,” they said.

“We ask that this undertaking be provided to us by no later than 8 March. In so doing the JSC will provide critical reassurance to the public that they will no longer be required to bear witness to compromised interview processes and will allow for confidence in the appointment process to be restored.

“While ours is an extraordinary approach, the request we put to the JSC is not. For years now, leaders of the judiciary, the organised legal profession, academics, civil society, even the JSC itself, have identified the urgent need for such specified criteria for judicial appointment and stipulated conduct obligations on the part of the members of the JSC,” the nine groups continued.

The JSC includes politicians and members of the legal profession, and while its work will include obvious political considerations, rightly, argued Professor Pierre de Vos, the interviews of candidates for high-level judicial appointments have recently moved away from rigorous and relevant questioning to the ventilation of petty grievances and sideshow politics.

The nine groups who have written to the JSC are trying to avoid a repeat of the interviews for the position of Chief Justice and give the public and interested parties objective criteria to evaluate those who judge the judges. Not doing so is likely to open the JSC up to further legal challenges.

JSC spokesperson Dali Mpofu, who has contributed to the commission’s challenges, recently welcomed such proposals, saying the JSC would hold a workshop to articulate criteria for assessing judicial candidates. The reason it hadn’t yet, he said, was because the position of Chief Justice was vacant and it would make sense for the head of the judiciary to lead such a workshop. It’s unclear why the JSC did not attempt to define its interview criteria under former Chief Justice Mogoeng Mogoeng.

The appointment of the Chief Justice is entirely President Cyril Ramaphosa’s prerogative, although he must consult opposition parties in Parliament. DM