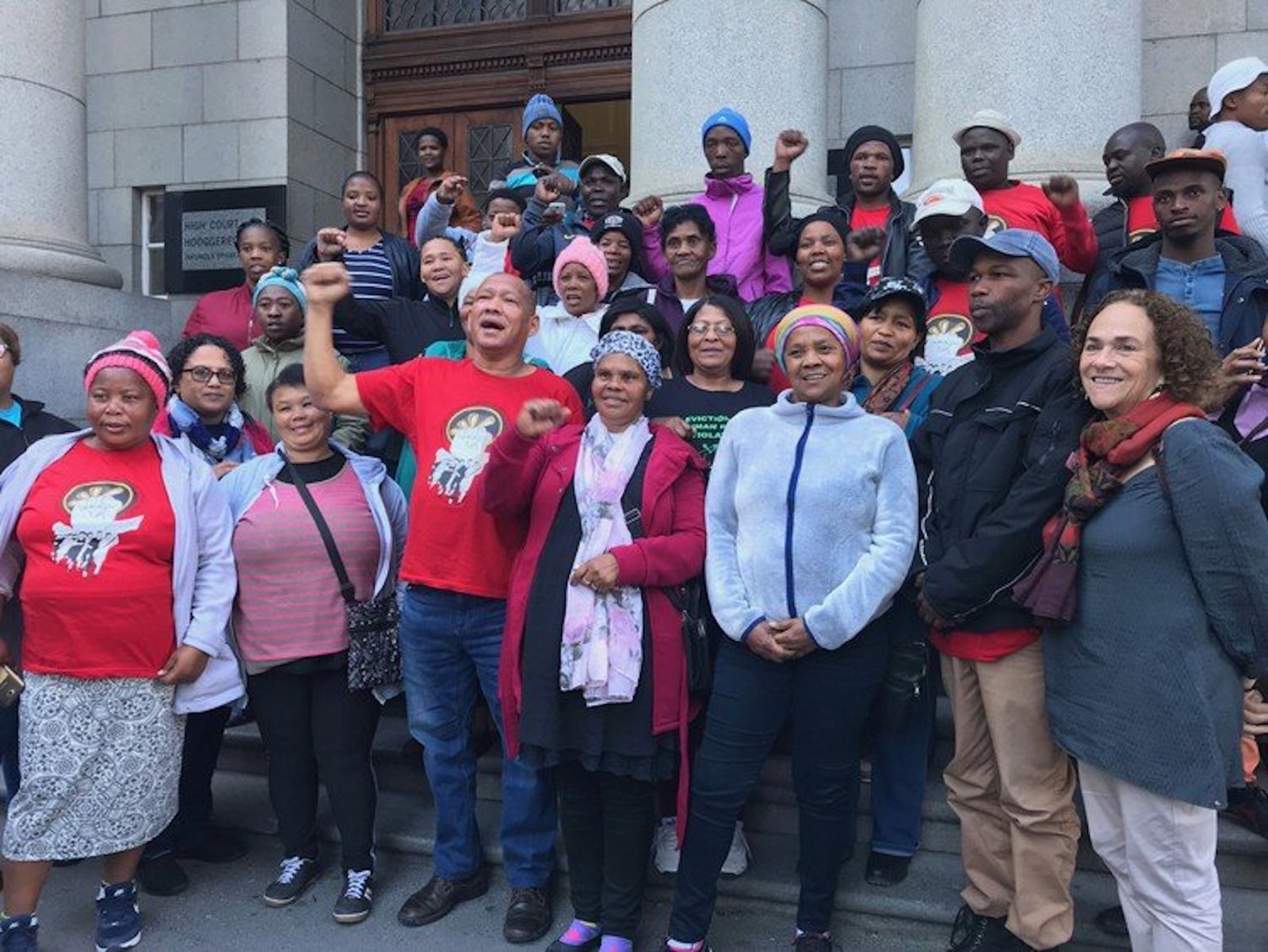 Farmworkers from Oak Valley took their employer to the Equality Court over accommodation in August 2019. (Archive photo: Tariro Washinyira)

The Constitutional Court has delivered an important judgment on interdicts against striking workers. The ruling says an employer cannot interdict striking workers as a group if some of those on strike commit violence.

In 2019, 364 workers belonging to the Commercial Stevedoring Agricultural and Allied Workers Union (CSAAWU) went on a protected strike at Oak Valley Farm in Grabouw, Western Cape. The workers accused the farm of providing employee housing based on racial classifications, and of refusing to recognise its “seasonal workers” as permanent employees.

But acts of violence and intimidation did occur.

The lawyers for Oak Valley sent a letter to the union demanding that it give a written undertaking that the workers would comply with the picketing rules.

In their reply, lawyers for the union denied that the workers had breached the picketing rules and denied that they were involved in any violence or intimidation. They said the unrest was caused by the local community and the union did not have control over these activities. The union proposed an urgent meeting to resolve the dispute.

The lawyers for Oak Valley then started urgent proceedings in the Labour Court to interdict the union and 364 striking workers from acting unlawfully or violently during the strike.

History of the Case

Many workers returned to duty, but 194 continued to strike. Oak Valley then went back to the Labour Court for a final interdict against the union and the remaining strikers.

The union argued that such an interdict was too broad because it interfered with the rights of workers who picketed peacefully, and that Oak Valley had failed to show that the violence was committed by the workers and not the local community.

The Labour Court rejected the union’s arguments. It granted a final interdict against the 194 workers and the union.

The union appealed, but the Labour Appeal Court upheld the ruling and said it was not necessary for Oak Valley to show that every worker was involved in unlawful behaviour during the strike. It was enough to show some workers had behaved unlawfully and the other workers associated with them.

Justice Leona Theron, for an unanimous Constitutional Court, said the Labour Appeal Court had failed to consider whether “the indiscriminate granting of interdicts prejudices innocent parties, and potentially, has a chilling effect on the exercise of their constitutional right to strike”.

Justice Theron said an interdict can only be granted against someone when it can be shown that there is a reasonable possibility they will threaten or harm the rights of another person.

To allow an interdict without proving that specific people in the group acted unlawfully could affect the rights of innocent people. This is because people who strike or protest lawfully would be hesitant to do so because they could be interdicted (and charged with contempt of court) because of unlawful or violent actions committed by other people. An interdict in this situation would have a “chilling effect” on the exercise of the constitutional rights to strike and protest.

“… where a protest or strike is substantially peaceful, but there are isolated and sporadic instances of unlawful conduct, only those protesters who associate with those acts of unlawfulness can permissibly be placed under interdict”, the court said.

The union was ordered to pay its own costs for the proceedings in the Constitutional Court. DM