Discussions on post-fire future move – mostly – behind closed doors, while plans are ‘a work in progress’ 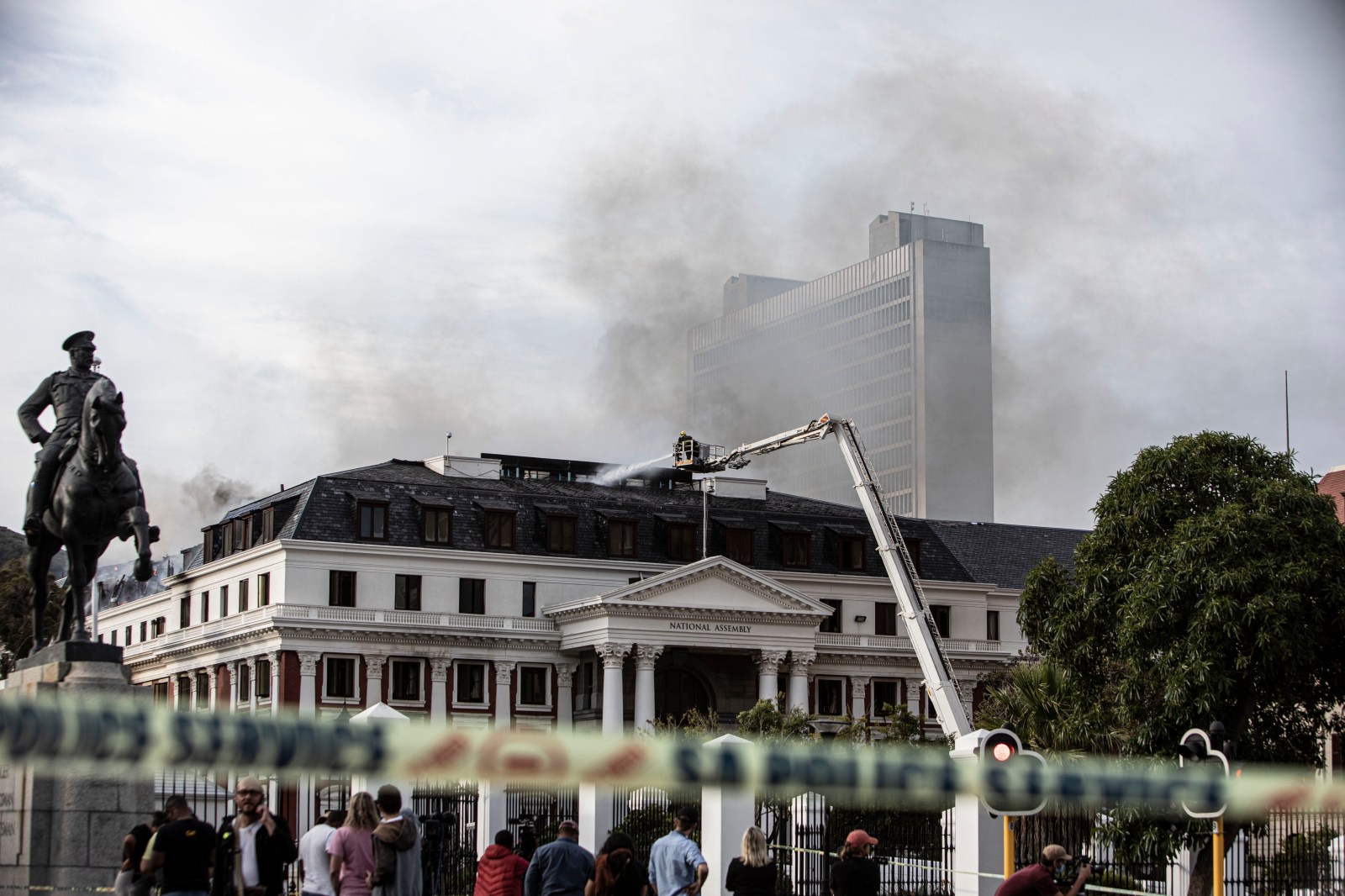 Firefighters battling the blaze that engulfed the National Assembly in Parliament on Monday, 3 January. The blaze began in the older part of the building and spread to the new assembly. (Photo: Leila Dougan)

Questions hang over Parliament’s future functioning, eight weeks after a devastating fire. Thursday’s programming committee decided not to discuss plans in any detail, referring the matter back to the closed sessions of party political chief whips.

It’s a new turn – and it effectively closes a door on transparency. It comes as National Assembly Speaker Nosiviwe Mapisa-Nqakula on Thursday, again, as on previous occasions and on other issues, said: “This matter will not be discussed here.”

And it wasn’t discussed – aside from a broad sweep summary of a preliminary report received a day earlier in the Chief Whips’ Forum, a political consensus-seeking structure that meets behind closed doors, which also decided to call for a more detailed report to be discussed on 23 March.

The forum proposed the use of the halls at the three parliamentary villages where MPs live at Acacia Park, Laboria Park and Pelican Park. In addition, a request also was made for a firm update on the usability of the National Council of Provinces chamber and offices, given initial reports of little if any fire damage there – even though Public Works had yet to produce an official report for Parliament.

Also requested were full cost assessment, and various timed options, with moving Parliament to another province only a long-term option, according to Wednesday’s Chief Whips’ Forum.

“I will not encourage us to discuss the report. Because it was discussed yesterday (Wednesday) at the Chief Whips’ (forum). We’ll take it back to the chief whips…” said Mapisa-Nqakula, repeating this later.  “I want to propose we do not discuss this matter at all.”

Both Speaker and ANC Chief Whip seemed to be on the same page that the Chief Whips’ Forum that sits behind closed doors should play a leading role. The opposition chief whippery made crucial interventions on two fronts.

One, that it was the programming committee that had to take decisions because the Chief Whips’ Forum was not a decision-making structure.

“The Chief Whips’ Forum is not a decision-making body. Issues need to come here. Speaker, avoid to suppress us,” was how EFF MP Hlengiwe Mkhaliphi put it.

Two, that the programming committee had to meet every week as the decision-maker of how the national legislature conducts its business.

“It would be inappropriate and not wise to, in any way, tamper with the weekly schedule of the NAPC (National Assembly Programming Committee), regardless of how long it lasts. To say we must only meet when there are new matters is improper…” said DA Deputy Chief Whip Siviwe Gwarube.

The DA push to ensure the full functioning of the programming committee was supported by both the EFF and IFP.

However, it was only after the last intervention that Mapisa-Nqakula said, “We are agreeing to the weekly meetings, as long as it is in a session of Parliament.”

Earlier, in response to Mkhaliphi’s intervention, Mapisa-Nqakula continued to tout the Chief Whips’ Forum with, “It is easy to feed information to your political parties… By the time we bring it here (programming committee), we can say this is what the chief whip recommended”.

Had these interventions not succeeded, a vital public view on how Parliament conducts its institutional management would have been blurred. The programming committee is only one of two such openings, the other being the Joint Standing Committee on the Financial Management of Parliament.

The lines between the political and institutional would have been blurred by the move to increasingly put in charge of the institutional running a political structure like the Chief Whips’ Forum.

The State Capture Commission in both testimony, and now also in its reports, often returned to such blurring of the lines between political, institutional and governance as central to why state capture unfolded as it did.

But Thursday’s opposition gains for transparency do not necessarily mean an end to further efforts to shift matters institutional from public view. Already the Announcements, Tablings and Committee Reports, or record of Parliament’s work, no longer seems to include correspondence aside from presidential letters, as used to be the norm.

The Speaker appears not to broker discussions after her input. Both Mkhaliphi and Gwarube were ruled out of order, repeatedly, triggering both to insist, “I am not fighting with you…”

While future plans for alternative venues to ensure Parliament’s effective functioning have been kicked to touch until 23 March, closer are the dates, or maybe one date, for the motions of no confidence in the president, and in Cabinet, brought respectively by the African Transformation Movement and the DA.

The matters of the motions were at a very advanced stage, Mapisa-Nqakula told Thursday’s programming committee, “I am consulting and… I will get back with a date next week. That is my intention.”