Welcome to the fantastic, plastic-free world of 2121 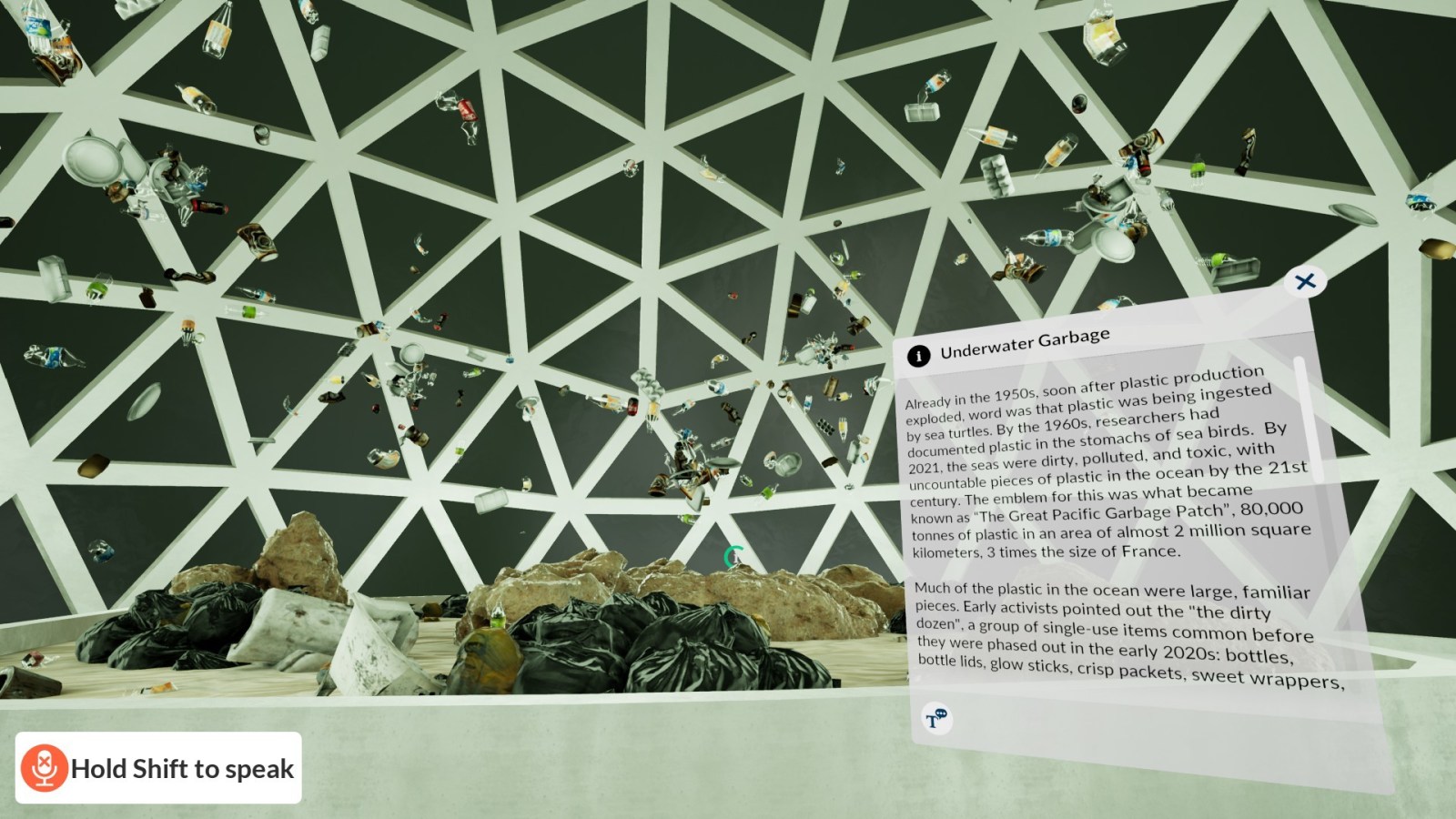 Artists from the Western Cape have brought to life a future without plastics through the virtual Museum of Plastic where marine and arctic life thrive in a virtual world and plastic pollution has been curbed. (Image: Supplied)

For many, a plastic-free world is a dream, but this dream has come true — in a virtual museum created in South Africa.

Plastic has been the word of the day as far as environmental concerns go, with academics, activists and environmental justice supporters alike calling for a future without the fossil fuel byproduct.

That future might be here sooner than many of us thought — in the form of the virtual Museum of Plastic, a collaborative effort between the urban art organisation Baz-Art and the pro-environment nonprofit organisation Greenpop.

The museum gives the viewer a glimpse of what life could be like if the world collectively tackled the plastic problem. The virtual display takes viewers to the year 2121 and creates a world where plastic has been done away with. It also tells the story of plastic, its history and science and the material’s impact on the environment.

Clean oceans are seen at an exhibition in the museum, alongside healthy marine organisms that are able to grow and contribute to the health of the oceans. Penguins roam clean polar spaces that are free of the threat of the climate crisis.

Art installations that show how plastic was first made as well as a visual display of the story of the material are displayed. Live murals related to the project can be seen in Grabouw, Hout Bay, Langa and in the community of Kurland, along the Garden Route.

“These pieces do exist in person already. So there is a physicality to them,” said Lauren Fletcher, the project manager at Baz-Art

“But the exciting thing about what cognitive innovation is doing is they’re trying to create online museums that can be accessible from anywhere in the world. Which was really exciting for us, because the murals that are based in South Africa can then be seen in Mexico, in Australia, in China. It just creates a new accessibility that is sometimes difficult to get with the physical.”

Plastic waste has been an issue that civilians have been tasked with the responsibility of tackling. Much has changed with the growing realisation that producers hold the power to reduce the plastic they manufacture and thus the waste.

The Museum of Plastic also teaches and encourages the importance of building a circular economy, where less plastic is produced and existing plastic is reused, refurbished and recycled into new products.

Lauren Teasdale, the managing director of Greenpop, said the museum was an archive for all to look back at current times and see the actions that could produce a world unpolluted by plastic.

“And so the message is to say, this is what happened. This is not all bad. We don’t demonise plastic as a material in itself, but it’s gone too far. We’ve just become so consumerist around plastic.”

Paint, pixels and a combination of the physical meeting virtual reality is how six South African artists brought the plastic-free world to life.

Ellena Lourens said working for the museum was interesting and exciting, especially because she had never worked in virtual reality.

“The theme of plastic and pollution is… important to everyone. Growing awareness and sensitivity of one’s impact on the environment, knowing what has a positive or negative effect and being able to use this knowledge to create a sustainable solution is integral to our survival,” Lourens said.

“I am hoping this exhibition will serve as a reminder to people to be more conscious and conscientious regarding plastic, its devastating effects on the ocean and consequently the Earth,” Lourens said.

The exhibition is available online, with a new wing released weekly until mid-December. DM/OBP

Welcome to the fantastic, plastic-free world of 2121