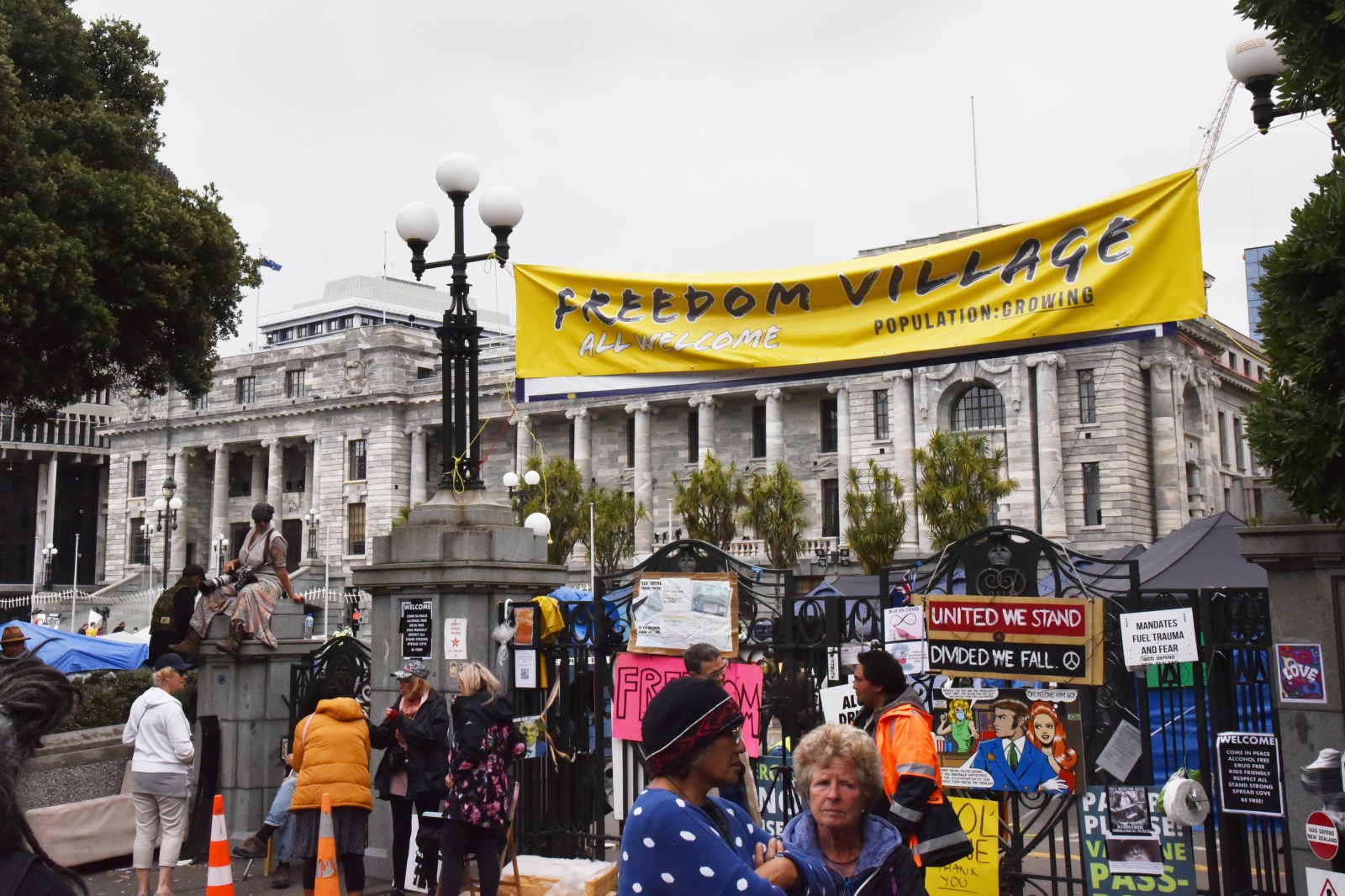 epa09795694 Anti-vaccine mandate protesters are seen outside Parliament House in Wellington, New Zealand, 02 March 2022. New Zealand police have surprised anti-vax protesters with a pre-dawn operation on day 23 of their occupation outside parliament. EPA-EFE/BEN MCKAY AUSTRALIA AND NEW ZEALAND OUT

WELLINGTON, March 2 (Reuters) - New Zealand police on Wednesday ended an anti-vaccine mandate protest that had disrupted the capital for the past three weeks, dismantling an encampment outside parliament, towing away vehicles and arresting dozens.

Several fires broke out among tents just metres from the parliament building, sending up billows of smoke before being doused by police, a Reuters witness said, as officers tried to clear the grounds.

Protesters had been given ample opportunity to leave, she said, adding that the gathering had been fuelled by misinformation and conspiracy theories.

Taking inspiration from truckers’ demonstrations in Canada, hundreds of protesters have been blocking streets with trucks, cars and motorcycles, in a protest that has led to clashes.

While some protesters packed up their tents and left, others resisted by throwing water bottles, fire extinguishers and chairs, and shouting abuse at police.

Police finally used sponge bullets to drive off the remaining protesters. They also used pepper spray on some of them before gaining control of the grounds and the streets around parliament, bringing the protest to an end.

Police said they made 65 arrests for a range of offences including trespass, wilful damage, and possession of restricted weapons. At least three officers were injured, police said.

Police towed away up to 50 vehicles.

The protest began as a stand against COVID-19 vaccine mandates but was later joined by groups calling for an end to all pandemic restrictions.

“We are fighting for our standard of life. We want our sovereign right to our bodies,” anti-vaccine activist Kate Siegert said earlier as she watched protesters move forward to block police advances.

Siegert, who has made several trips from her home in Auckland 640 km (400 miles) away to join the protest, said she lost her job because of mandates requiring vaccination for those working in the health industry.

At least 10 children were seen within the protest area and police said they had concerns for their wellbeing.

A country of five million people, New Zealand imposed tough anti-virus curbs that restricted its cases to just over 118,000 and 56 deaths, far lower than in many developed countries.

But fuelled by the Omicron variant, daily infections are hovering near record levels.

About 95% of eligible people are vaccinated with two doses, with shots mandatory for some staff in front-line jobs.

Julie Thompson, who said she was a registered nurse and unvaccinated, stood watching the fires as she nursed a swollen finger that she said had been broken when police pushed her off a park bench.

“This is the end result of not talking to your people,” she told Reuters. “It has galvanized people.”

By Lucy Craymer and Praveen Menon