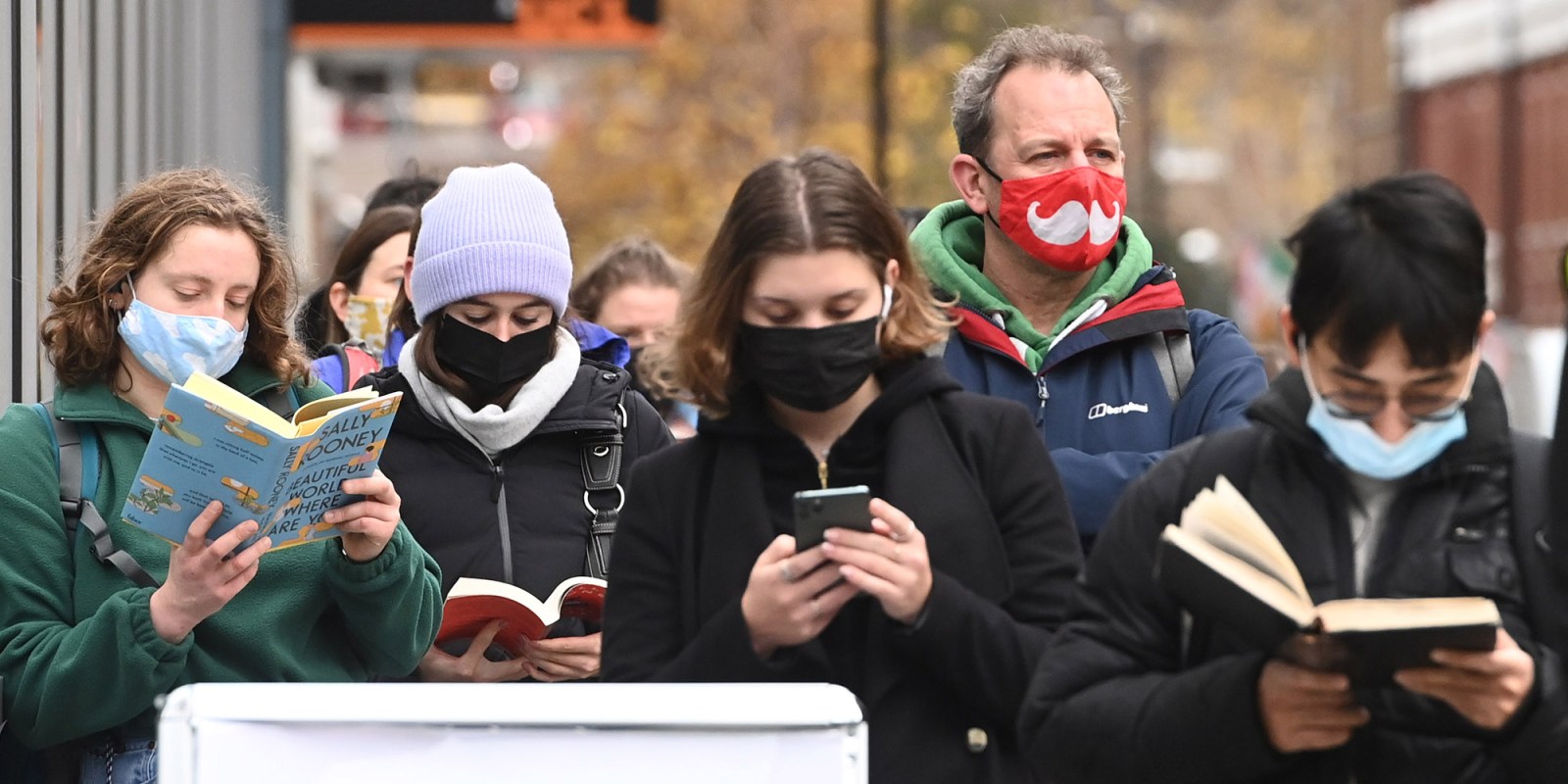 People queue up outside a vaccination centre for Covid-19 booster jabs in London on 14 December 2021. (Photo: EPA-EFE / FACUNDO ARRIZABALAGA)

Hong Kong’s Covid-19 fatality rate is now the highest in the developed world amid a wave of deaths among its under-vaccinated elderly population, ramping up pressure on officials to get the outbreak under control.

UK Health Secretary Sajid Javid said he’ll remove the mandate for those working in health and social care to be vaccinated against Covid-19, starting on March 15.

Vaccines protected children and adolescents from severe disease even after the immune-evasive Omicron variant emerged, according to findings from US government reports. 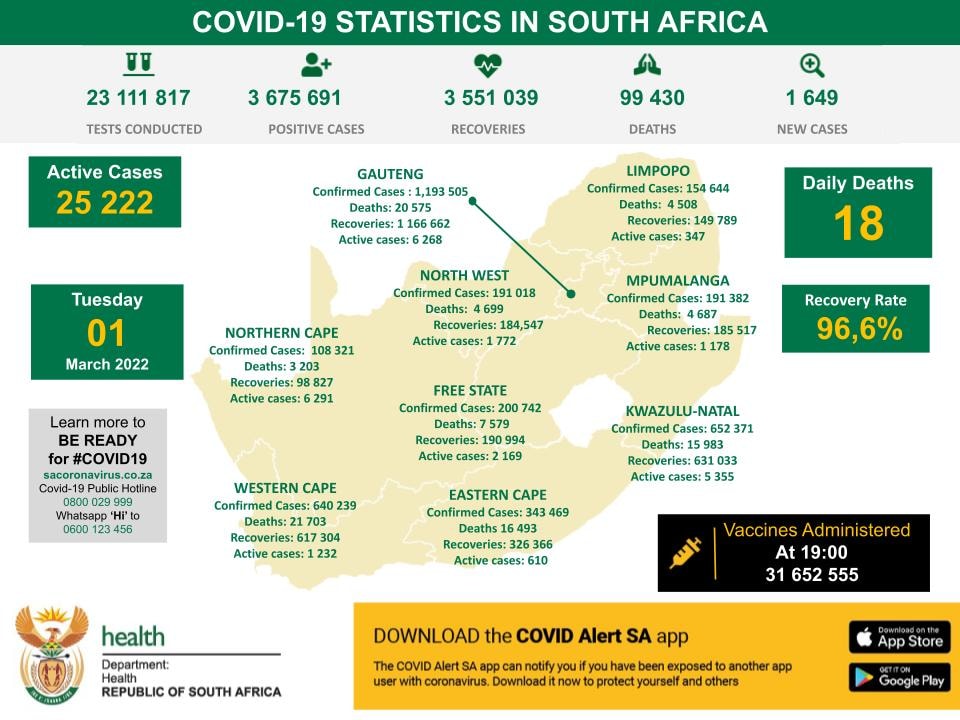 Covid-19 vaccines protected children and adolescents from severe disease even after the immune-evasive Omicron variant emerged, according to findings from US government reports.

After Omicron became dominant in the US late last year, protection against infection and urgent care visits declined for people aged five to 17 who had received primary inoculations, according to US Centers for Disease Control and Prevention data released on Tuesday. However, vaccinated children and teens were still less likely to get infected than their unvaccinated peers, the agency said in its Morbidity and Mortality Weekly Report.

UK Health Secretary Sajid Javid said he’ll remove the requirement that those working in health and social care be vaccinated against Covid-19, starting on March 15.

The announcement on Tuesday follows a public consultation on revoking the rules, which had threatened to force thousands of unvaccinated healthcare workers out of their jobs.

Australian Prime Minister Scott Morrison has tested positive for Covid-19, he said on social media. “I am experiencing flu-like symptoms and will be recovering over the next week,” Morrison said. He is isolating at home in Sydney.

Hong Kong’s banking regulator told finance executives in recent weeks that it’s lobbying the government to shorten the strict hotel quarantine placed on incoming travellers as it seeks to prop up confidence in the city’s status as a financial hub.

The Hong Kong Monetary Authority told a group of banks that it will start engaging with the government to reduce the hotel quarantine to seven days from 14 days, followed by another week of isolation from home, said people familiar with the talks, asking not to be identified because the meetings were private.

Hong Kong’s Covid-19 fatality rate is now the highest in the developed world. The financial hub averaged eight deaths per one million people in the 10 days through Monday, the most among advanced economies, according to Bloomberg calculations based on Johns Hopkins University data.

Hong Kong reported a record of 117 new deaths on Tuesday. Most of the fatalities during the current wave have been elderly people, and 91% of those who died weren’t double-vaccinated, according to government data released on Sunday.

Singapore cases at highest in a week

Singapore’s new local Covid cases increased to the highest level in a week, according to the Ministry of Health’s data. The number of new local infections, including those detected through rapid testings, rose to 23,891 as of noon on Tuesday, from 13,450 on Monday.

Tuesdays tend to be Singapore’s biggest caseload each week, owing in part to weekend catch-ups and people testing at the start of the week. The past two weeks have seen cases drop before a Tuesday spike, delaying a potential reopening.

The city-state plans to substantially ease restrictions once the current wave peaks.

Japan ended a ban on new entry by foreigners and eased quarantine rules as of Tuesday.

New foreign entrants except for tourists will be admitted, with a cap of 5,000 arrivals a day, from 3,500. Japan also scrapped the quarantine period for those who have had a booster shot and have entered from countries unlisted by the government, and lowered it to three days for those who came from places on the list.

US warns on travel to Vietnam

The US State Department raised its travel advisory for Vietnam to the highest level in response to recent surges in Covid-19 infections. Vietnam is ranked as Level 4, which means Americans should avoid all travel there, according to a statement. Vietnam on Monday reported 94,385 new cases.

One of China’s top health experts raised the possibility that China could follow Western nations and attempt to live with Covid-19, a rarely voiced view in the country as it persists with its Covid-zero strategy.

“At an appropriate timing in the near future, China will surely present its version of the roadmap for co-existing with the virus,” Zeng Guang, former chief epidemiologist of the Chinese Centre for Disease Control and Prevention, said on his social media account.

Americans are less worried about catching and spreading Covid-19 compared with six months ago, according to a new poll by The Associated Press-NORC Center for Public Affairs Research, The New York Times reported.

Support is also decreasing for mask mandates, which are easing across much of the US, the poll found, according to the NYT.

Hong Kong is weighing up whether to halt public transport during a lockdown or allow residents who test negative with rapid screening kits to leave their homes, the South China Morning Post reported, citing unidentified people.

The government is considering a number of options about the lockdown, including whether it should be citywide or done on a rolling basis, according to the report.

Vaccinated foreign visitors to Thailand will no longer be required to take a second RT-PCR test after arrival from Tuesday as the nation woos tourists. The insurance requirement for Thai visas has also been lowered to $20,000 from $50,000.

From Tuesday, authorities will start distributing free rapid antigen test kits through 2,000 centres nationwide amid a health ministry warning that daily cases could spike to 100,000 by mid-April. New infections fell to 20,420 on Tuesday.

Malaysia to exempt some travellers from test

Malaysia will relax coronavirus testing requirements for some travellers starting on Thursday, Health Minister Khairy Jamaluddin said in a statement.

The exemption applies to those arriving in Malaysia via the vaccinated travel lane with Singapore, the Langkawi travel bubble, and short-term business travel via one-stop centres, he said. DM/MC

– With assistance from Alex Morales.