TO SERVE AND PROTECT? 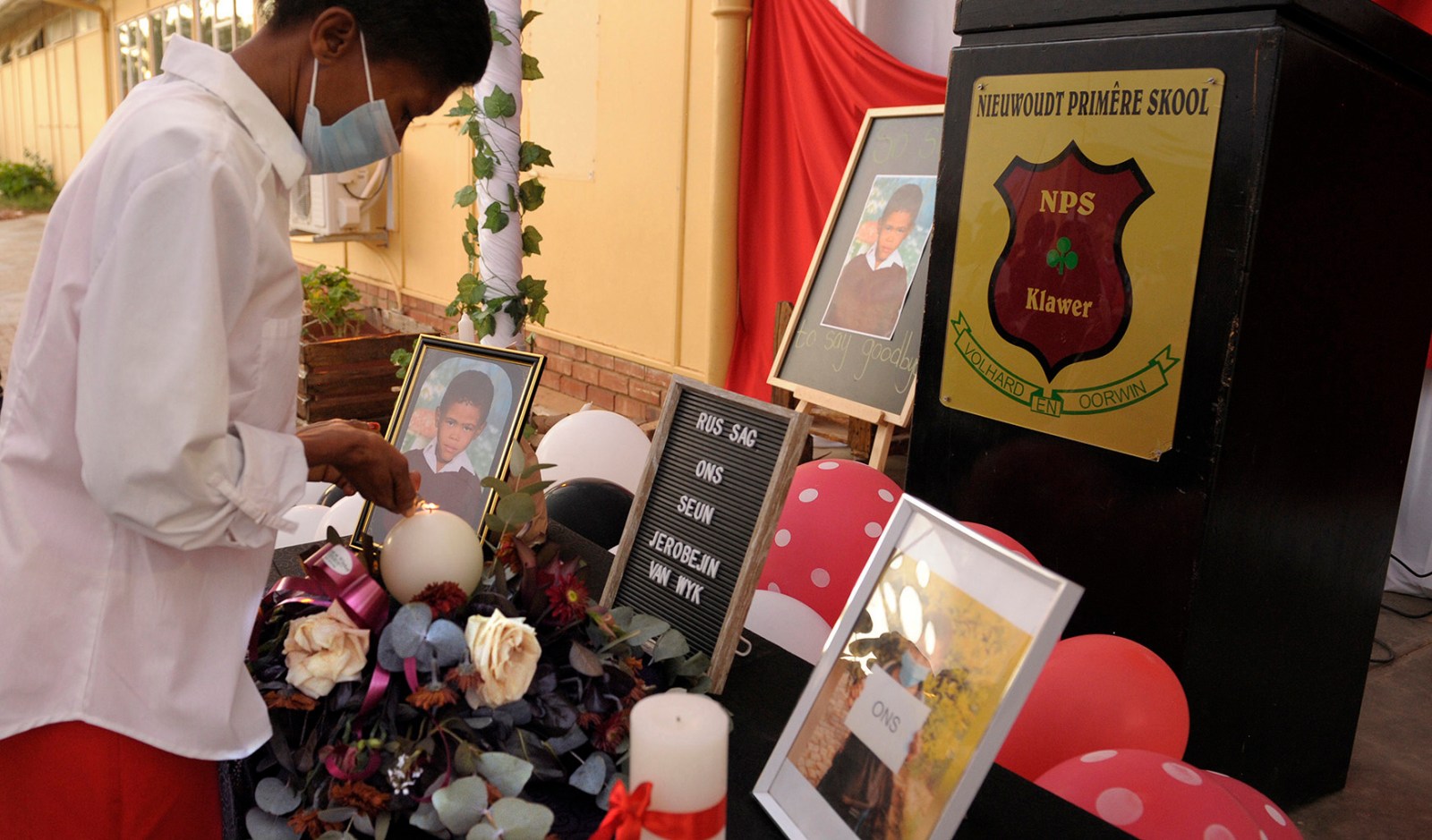 Klawer resident Triesa van Wyk at the memorial on 17 February for her 13-year-old son Jerobejin. The boy died after being accused of stealing mangoes. Following Jerobejin’s death, several complaints have been aired about poor service from the local police station. (Photo: Joyrene Kramer)

In Klawer, the mother of murdered 13-year-old Jerobejin van Wyk believes if local police had provided faster assistance, her son could have been found alive or with his body intact. The boy’s murder highlighted several issues the community has with the police station, which is now the subject of a provincial police investigation.

‘I would say they’re neglectful to their face,” said Triesa van Wyk, describing the service she received from the Klawer police station after the murder of her son in February.

The small town of Klawer is situated alongside the N7, about 300km north of Cape Town en route to the Northern Cape and, further, to Namibia. The town made headlines in February when Van Wyk’s son, 13-year-old Jerobejin van Wyk, was killed by another resident, allegedly after stealing from his mango tree.

Read in Daily Maverick: Mother of brutally murdered Klawer boy wants to know what his final words were 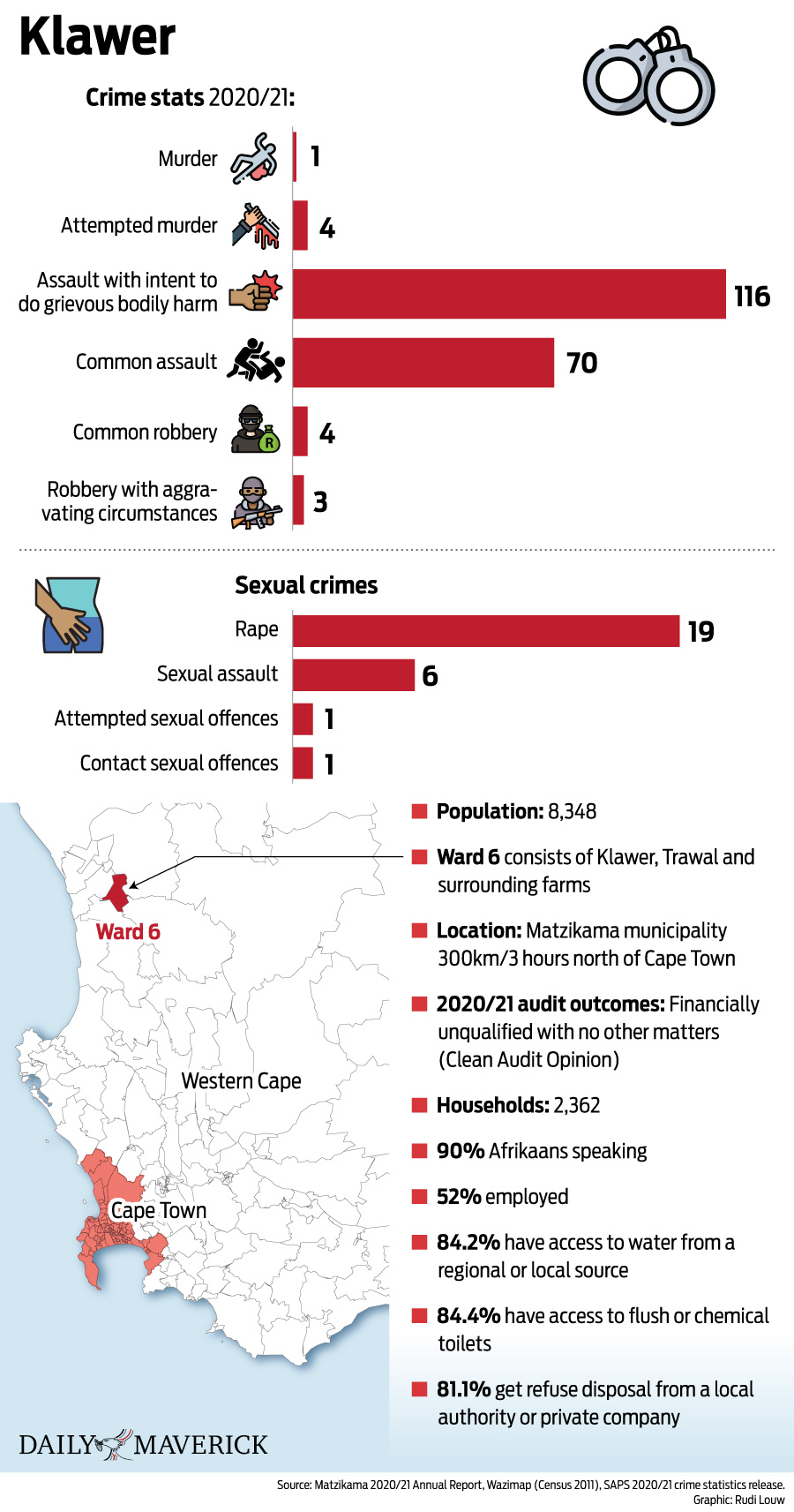 During an interview with Daily Maverick in Klawer, Van Wyk and her husband, John Willemse, said they arrived at the police station on Wednesday, 2 February at about 6.30pm after being told of Jerobejin’s disappearance. The pair only left the police station at 2.30 the next morning.

“I would say they were neglectful,” said Van Wyk, describing their treatment from the police.

The pair said there were no Afrikaans-speaking individuals to assist them, only English-speaking police officers. According to the 2011 census, the home language of 90% of the town’s inhabitants is Afrikaans.

Van Wyk said, “If [the police] acted in that time, my son would have lived or his body would have been complete.”

On Friday, 4 February, human remains were found in a drain on the property of 54-year-old Daniel Smith. DNA testing later confirmed these remains were of Jerobejin. The boy was buried on Saturday, 26 February while the murder accused, Smith, is due to appear in court in April.

The boy’s family aren’t the only residents with complaints about the local police station.

“We don’t have the support of this police station. We’re very busy with them, we’re hard at work with them,” said Koopman, who was appointed after November’s local government elections.

Noting the challenges with the police in Klawer, Koopman said: “Afrikaans, the language question; there’s not enough manpower; there isn’t a special task force there; they only have visible policing — you can’t function like that.”

There have also been complaints about slow responses for police assistance and of telephone lines not working. Koopman said the police should have 39 officers at the station, but there are only 29.

“Then we sit with a captain that books off for three months. If the head isn’t there, how can the body function? It rots at the top first.”

Koopman said meetings had been set up with the police, including with brigadiers and generals.

“We’re expecting the minister here too because it can’t go on like this. The police are really failing our community.”

In Klawer, even the most vulnerable do not find help from local police.

Wendy Pekeur, the director of Ubuntu Rural Women and Youth Movement, is a gender-based violence (GBV) activist with years of experience working in rural communities.

She told Daily Maverick that when she and her team conducted a GBV blitz in the area they came across a woman sitting outside the Klawer police station. The woman had bruises on her face.

When Pekeur and her group asked the woman what she was doing, she said she wanted to report a case of domestic violence against her partner. However, because she “smelt of alcohol”, the police refused to take her case.

In response to questions from Daily Maverick, Western Cape SAPS spokesperson Colonel André Traut said: “Certain shortcomings at the Klawer police station are currently being addressed by means of an intervention from the office of the provincial commissioner. This process is still under way and the outcome thereof is best discussed once it has been finalised.”

Regarding the alleged GBV victim who tried to open a case, Traut said: “Gender-based violence and femicide are both on top of the Western Cape police’s priority list, and management will not hesitate to take remedial steps against officials who refuse to render assistance to victims.

“Kindly encourage the victim who made the allegation to you to approach police management so that her complaint can be investigated.” DM