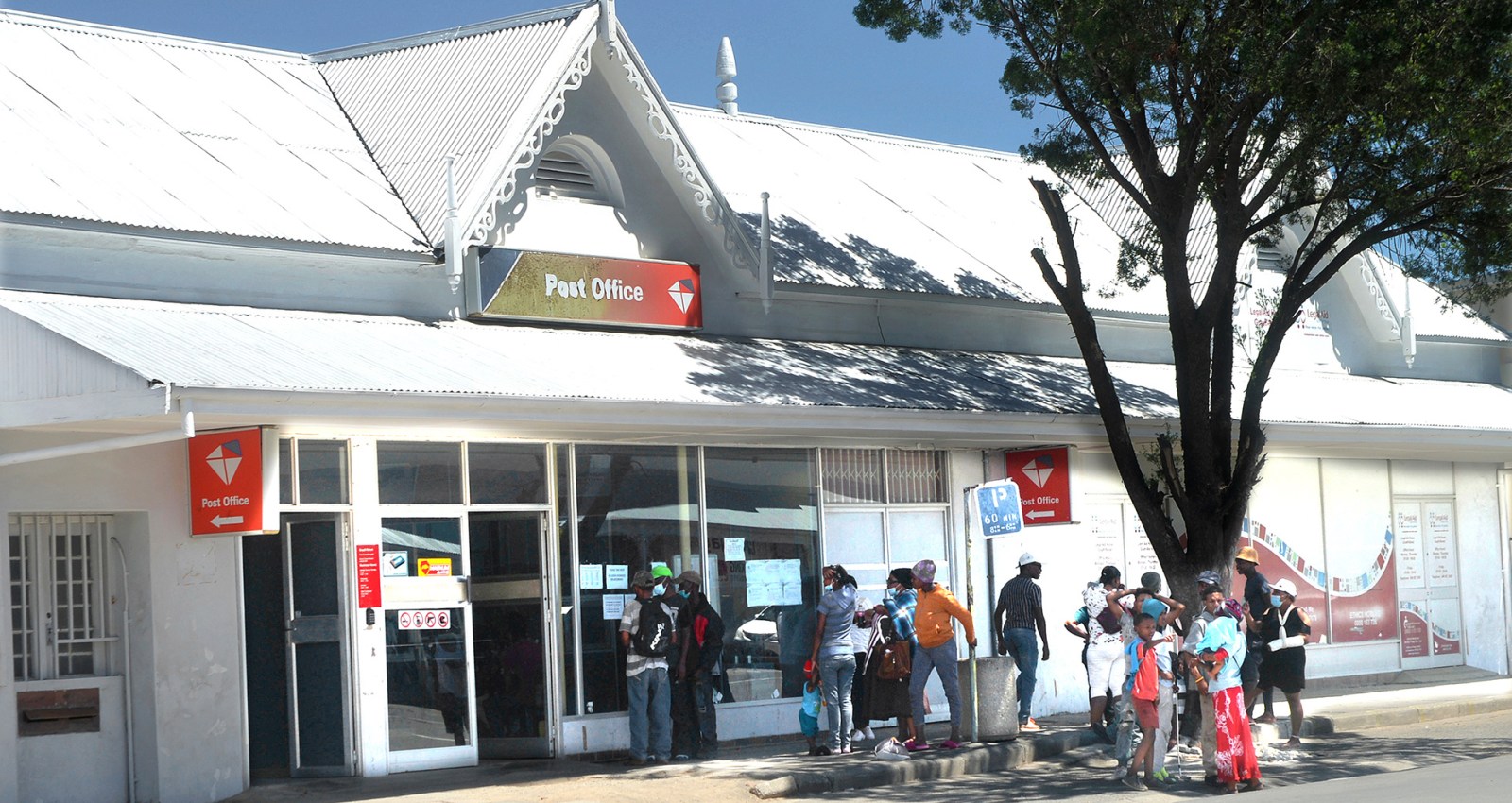 With the SA Post Office defaulting on rent, stressed landlords seeing a notable increase in break-ins and no income from their properties, several Karoo communities that rely on social relief have been placed at high risk. But one tiny, impoverished community got Parliament to listen to their plight and to investigate serious allegations.

Several Karoo post offices, along with more than 100 others countrywide, are facing closure or have been temporarily closed as the South African Post Office finds itself in dire financial trouble.

But the trouble doesn’t end with money. It also starts with it, as the large sums of cash handled by post offices have led to a sharp increase in employee abductions, thefts and robberies of money meant for the R350 Social Relief of Distress Grant payout. In several Karoo towns, the post offices are a lifeline for many as this is where they get their grant payouts.

The group CEO of the South African Post Office, Nomkhita Mona, speaking at a sitting of Parliament’s Standing Committee on Public Works, said it was very important to “protect and defend” their services.

She said post offices had been experiencing overcrowding — many people arrive to try to collect the R350 grant before it is their turn, out of sheer desperation. “They don’t wait for the SMS… it creates problems for us.”

She said post offices had seen a huge increase in attacks, robberies and break-ins because of the large amounts of cash that must be available to pay the grants.

“In some cases, employees are abducted from home by robbers, forced to bring the keys and taken to post offices,” she said. “This has led to a large number of personnel having post-traumatic stress.”

In Jansenville, where the post office has become a lifeline for some of the Eastern Cape’s poorest communities, a concerted effort from community leaders, the DA’s Samantha Graham-Maré and councillors led to a petition being presented to Parliament and the local post office in December to protest against the ongoing problems at the facility.

Graham-Maré, the DA constituency head for the Dr Beyers Naude Municipality and the party’s spokesperson on public works, explained that the Jansenville Post Office served some of the most vulnerable communities in South Africa.

Residents from Klipplaat, where unemployment hovers around 80%, pay R80 for a return trip (about 60km) to Jansenville and were often turned away when the post office ran out of money or was closed for some reason.

“Klipplaat is a declared poverty site,” she said. “Grants are a major source of income in that area.”

Graham-Maré said the suspension of services at post offices when they ran out of grant cash was a huge problem and often left elderly people, who came to collect pensions or other grants, sleeping on the street as they were unable to return home.

Since raising the problem, she said, a WhatsApp group had been established to warn councillors, who can, in turn, tell communities when post offices run out of money and cannot disperse grants.

With regard to the Karoo post offices and specifically the problematic post office in Jansenville, she said: “We don’t have a nearby alternative. The threat of closure of the post offices weighs on us quite heavily.”

Mona said allegations made by residents against the Jansenville Post Office management, which include running a loan shark business and stopping people outside the post office after they had received their grant payment, selling alcohol in the parking lot to grant recipients, and erratic opening hours, were being looked into by an internal security team.

“If these things are happening it is completely unacceptable. Consequence management is needed.”

She added that they were aware that some branches were manned by a single person and they were trying to appoint a second person to avoid interruptions to service.

Concerning the Jansenville Post Office, she said they had a “sting operation” on 21 January — at the time it looked like it was going well. “We have put the area manager on to the issue as well,” she said.

But, in many towns, the closure of post offices because of non-payment of rent is posing an even bigger threat.

In a response to a parliamentary question, the acting director-general of the Department of Public Works, Nonkqubela Jordan-Dyani, said the post offices in the Dr Beyers Naude District Municipality, Graaff-Reinet,  Aberdeen, Willowmore and Jansenville rent their premises from private individuals.

She said the Jansenville post office’s outstanding rent was paid last year, but in Graaff-Reinet the landlords are owed R552,534.75 in rent, in Aberdeen about R150,000 and in Willowmore R103,000.

“All landlords were sent a letter explaining the financial situation of the South African Post Office and negotiating a payment schedule.

“The commitment made was that payments would be made as soon as finances become available. Some payments are honoured based on cash flow. The Jansenville Post Office landlord was fully paid on February 10.”

Post Office spokesperson Johan Kruger said the lockdown to reduce the spread of Covid-19 had a marked effect on Post Office revenue, especially in the initial stages of lockdown when only essential services could be rendered.

“The revenue of the SA Post Office has not fully recovered yet and as a result the company is able to serve its debtors only partly. We do now see good growth in certain revenue streams.”

He said about 4% of Post Office branches were temporarily closed but they did not foresee that this would be a problem in fulfilling their obligation to pay social grants.

“Where necessary, mobile paysites are used on Sassa paydays to ensure that all grant beneficiaries can access their grants and to ensure that the Post Office complies with the requirements in the agreement.

“The SA Post Office is engaging the government on possible assistance.”

Kruger admitted there had been problems at the Jansenville Post Office in 2021.

“Jansenville Post Office experienced cash shortages last year when the [R350] grant was extended without prior notice. Remote areas such as Jansenville have to order their cash at least a month in advance. The cash projections have been adjusted and since then the branch has not seen any shortages.”

The CEO of the South African Property Owners Association, Neil Gopal, said they were assisting between 15 to 20 of their members who are owed money by the Post Office.

He said for some post offices, rent had been outstanding for five years and for others it had been only a few months.

“The Post Office does not have the finances to pay the rent, but has escalated the matter to the National Treasury,” he said. DM/MC