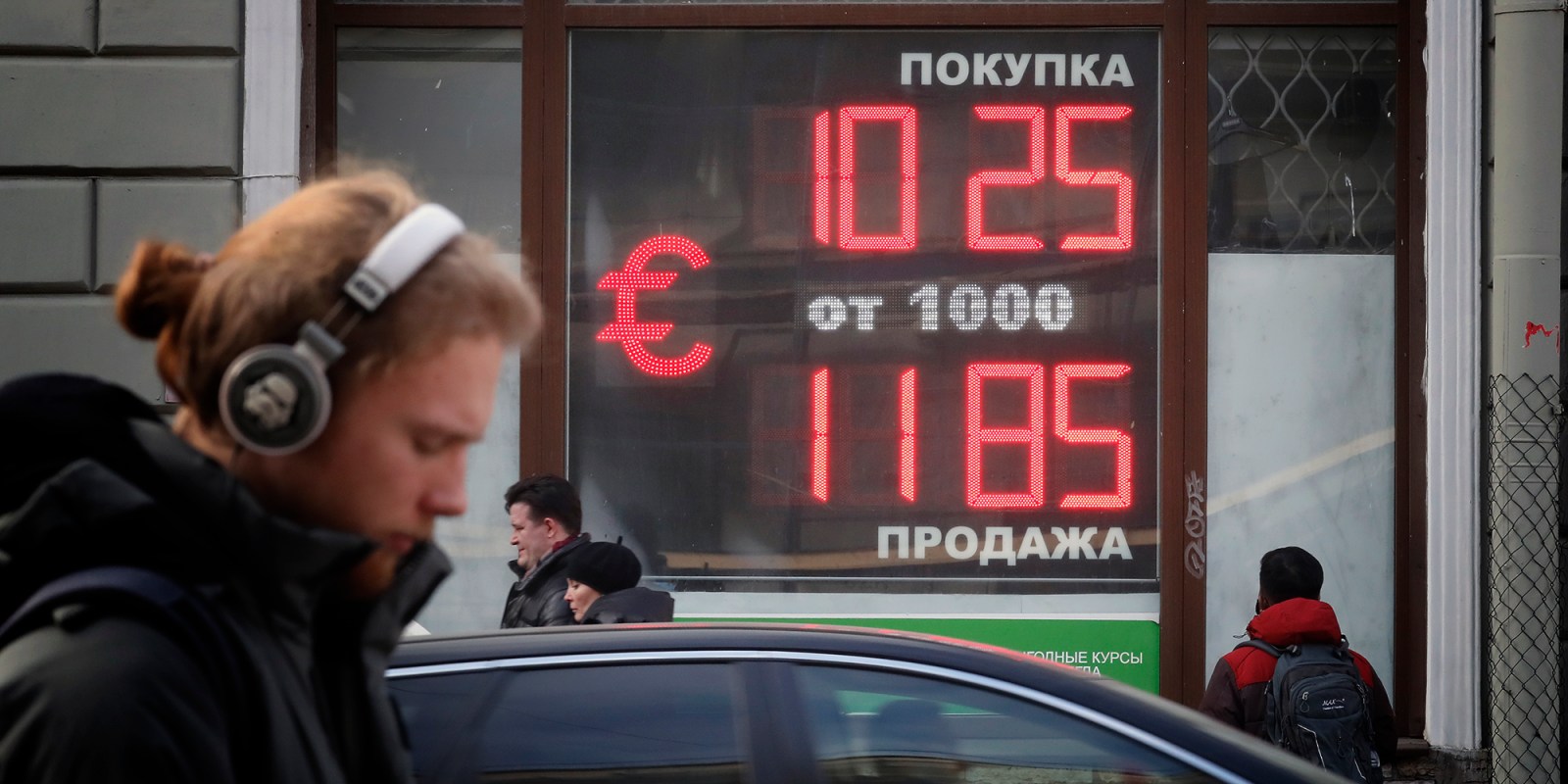 A digital panel displaying the euro and US dollar currency rate at an exchange office in St Petersburg, Russia, on 28 February 2022. (Photo: EPA-EFE / ANATOLY MALTSEV)

Global volatility is off the charts as investors take cover in safe havens. This comes as Russia’s central bank raises the key rate to 20% from 9.5% in an emergency measure, while oil prices remain on track for a third monthly gain. South African businesses and the people who run them have not been spared the volatility.

JSE counters with even a remote connection to the Russia-Ukraine conflict have taken a pounding in the past week as gun-shy investors decided they were not worth the risk.

Leading the fall was Prosus, which plunged almost 20% over the week, followed closely by holding company Naspers, which has fallen by almost 17%.

Industrials like Mondi and Barloworld, which have big investments in Russia, have fallen by 8% and 13.73%, respectively. Property firm Nepi Rockcastle, which is not directly invested in Russia but has about 80% of its property portfolio invested in countries bordering Ukraine, fell by 10% last week.

On the other hand, platinum group metal (PGM) stocks are surging as the market anticipates that local miners could benefit if Russian PGM sources are embargoed. In this regard, Impala is leading the charge with a 19.8% rally over the past week, but Anglo Platinum, Sibanye, Harmony and Gold Fields have also surged.

The economies of Russia and Ukraine are small in global economic terms, with Russia contributing 1.8% of global GDP, and Ukraine generating 0.2% (relative to SA’s 0.4% and the US’s 24.7%), but both countries tend to punch above their weight in terms of their contribution to the supply of commodities, says Peter Little, a fund manager with Anchor Fund Management.

As it is, global commodity prices have been drifting higher through the year as economic activity normalises with easing pandemic restrictions, increasing demand at a time when supply chains are still somewhat disrupted.

“Russia accounts for 14% of primary platinum supply and 44% of primary palladium supply,” Little says. “This means that Russian supply of PGMs, particularly palladium, which remains in a deficit, could drive those metals further into deficits in the short term,” he says.

South 32, the Perth-based mining and metals company that was spun out of BHP Billiton in May 2015, generates more than 50% of its revenue and operating profit from bauxite, alumina and aluminium. After reaching a 13-year high in 2021, the aluminium price has reached an all-time high in 2022, he adds.

Once again, sanctions and supply constraints have raised investor fears. China, the world’s biggest producer, has seen restricted production as a result of energy issues and pollution fears.

And while the Russian company Rusal produces about 6% of global supply, one does not know the impact of sanctions on this supply.

On the oil front, prices have risen following an unusually cold Northern Hemisphere winter, which has increased demand for energy commodities at the same time as global economies are returning to normal.

“Concerns around energy supply from Russia will keep the prices of energy commodities elevated for now. This may be mitigated by the release of strategic reserves by major global economies,” he says, adding that sanctions are unlikely to target companies exporting oil and gas from Russia.

Of course, when it comes to higher oil prices, Sasol is a direct beneficiary – but South African motorists aren’t, of course.

Perhaps the two counters most affected are Mondi and Barloworld, given that both companies have material investments in the region. Russia makes up 12% of Mondi’s production, while it generates 9% of its revenue from customers located in Russia.

“At least there are balancing factors at play here. And at least this is a sector that appears not to be affected by sanctions, but we don’t know what is happening at an operational level.”

At Barloworld, the exposure is greater, with about 27% of operating profit coming from Russia and Mongolia.

“Management noted in the recent FY21 results that it has an abundance of brownfield and greenfield projects in Russia and Mongolia, which would continue to drive good operational performance in both regions,” says Little.

Prosus, with its much-celebrated investments in fast-growing but politically less stable emerging markets, has not escaped unscathed either – although the Russian influence is negligible.

It has two investments in Russia, representing about 4% of its net asset value, says Little. This comprises its 27% stake in what was originally known as Mail.ru and is now rebranded as VK. This accounts for just 0.3% of Group NAV. A 100% stake in Avito, which comprises part of the Online Classifieds vertical within the Ecommerce division (the unlisted “rump”, as most consider it), accounts for about 3.5% of NAV.

“These are rounding errors in Prosus’ valuation. Of far greater significance is China’s sympathy with Russia’s approach to its neighbours’ sovereignty,” he says.

“Chinese tech conglomerate, Tencent, accounts for about 80% of the NAV of Naspers/Prosus, and so if China were to do anything that shows increasing support for Russia’s military intervention, it may also risk being the subject of western sanctions, which would have a significantly bigger impact on Naspers/Prosus than the impact from exposure to direct investments in Russia.” However, he adds, this is not the base case.

Other companies with operations in Russia include British American Tobacco and Richemont.

Gareth Penny is the non-executive chair of Norilsk Nickel, or Nornickel, the world’s largest producer of nickel and palladium and a leading producer of platinum and copper, which is listed on the Moscow Exchange. He is also chairperson of asset manager Ninety One.

It remains to be seen whether the sanctions on Russia, and on Russian companies, will prompt him to resign from either position. DM/BM