It’s Moulin Rogue! With Juju, an AK-47 and a show tune, the stage is set for a political musical spectacular 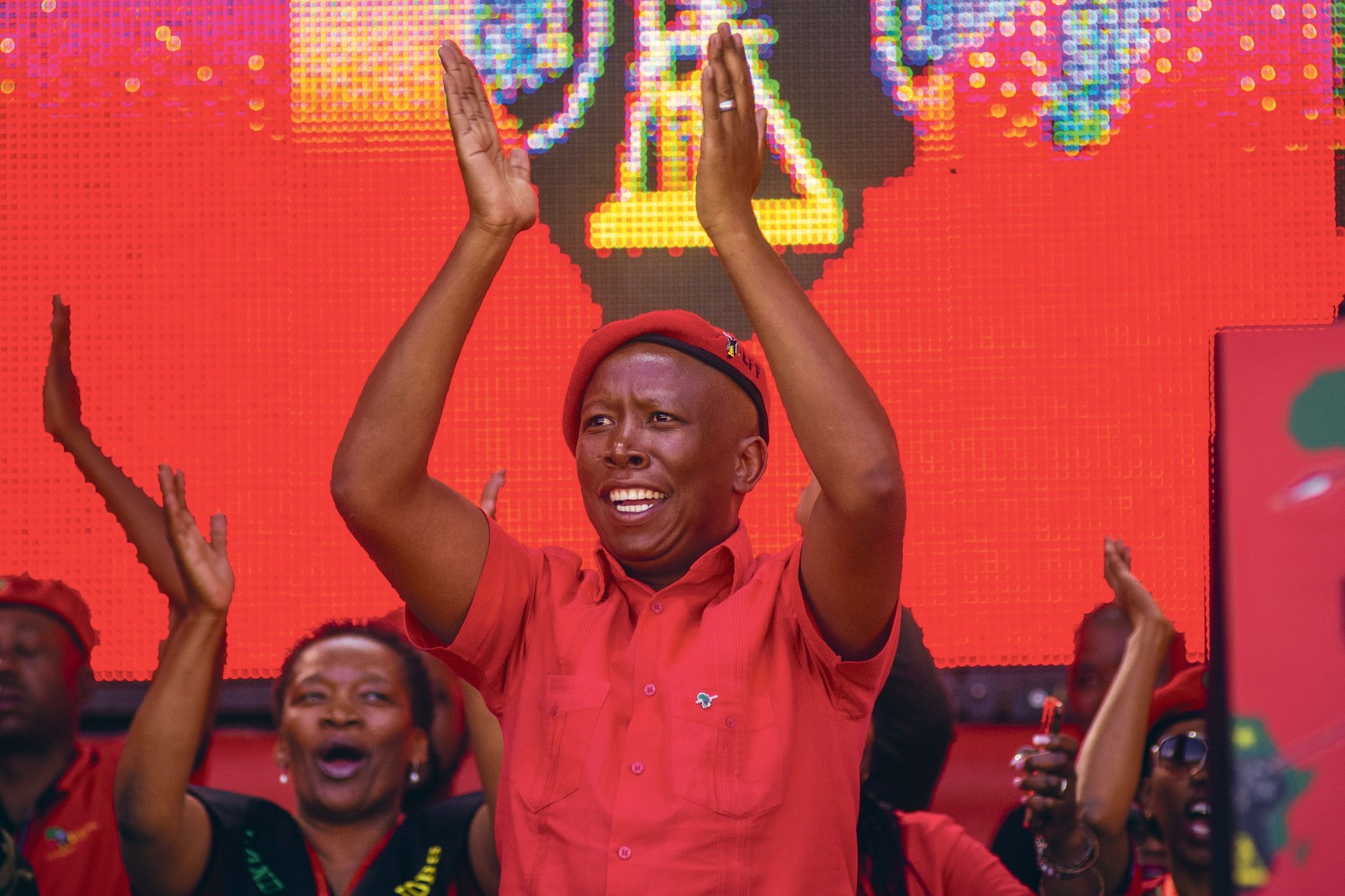 Julius Malema is a fabulous performer, utterly convincing in his chosen, favourite role: that of Hero of the Struggle. (Photo: Waldo Swiegers / Bloomberg via Getty Images)

Given the right staging, our politicians could go far in musical theatre. With Baz Luhrman as director, our rousing singalong could be like ‘Moulin Rouge!’ set simultaneously in Khayelitsha and the dance hall at Mahlamba Ndlopfu.

Oh, the stirring spectacle of Julius “Me! Me! Me!” Malema in the witness box, defending himself against some evil apartheid boere army trying to curtail his freedom to claw his way to the top by stoking racial tensions!

Little Juju is at his best in such circumstances – he really rises to the occasion. He’s a fabulous performer, utterly convincing in his chosen, favourite role: that of Hero of the Struggle. Of course, that Struggle-with-a-capital-S is over, done, finished, and the new struggle is against poverty, corruption and bad governance, but don’t let that distract you from Malema’s pitch-perfect rendition of someone pretending to be fighting the anti-apartheid struggle all over again. It’s not just political theatre – it’s political musical theatre!

He’s not a wonderful singer like Mbuysiseni Ndlozi, who is practically the Beyoncé of the EFF, but that’s not the point. Juju really puts himself into the lyrics, really identifies with the song. He becomes the song.

But he also reserves the right, like the Cheshire Cat in Alice in Wonderland, to make the words mean whatever he wants them to mean. Hence “Kill the boer” becomes “Kiss the boer” and so on; “Kill for Zuma” becomes “Kiss Zuma’s ass”, et cetera.

Okay, “Kiss the boer” evokes the scary idea of Juju with his tongue down Eugene Terre’Blanche’s throat, but I would argue that even musical theatre should aim to challenge the audience’s assumptions and yank it from its comfort zone. That vision is more titillating, at any rate, than the image of Juju with his tongue up JZ’s bum, but it certainly shows his range.

Yes, given the right staging, Julius could go far in the musical theatre. Give him a big platform, and an AK-47 (even a wooden one), and he’ll really show South Africa what he can do. He still needs to learn the right Zuma dance steps, but he’s taking lessons and, with the right lighting, he’ll even look like a Big Man and not a Moral Midget. He can surely take all this nation’s persistent problems and, by means of pure acting prowess, inflate them to the point of explosion.

I’m thinking this approach could benefit other South African politicians who are struggling, if that’s the right word, with their various agendas – clinging to their jobs and huge salaries, say, or repositioning themselves for the great battle for power about to erupt when the ANC has to elect a new leader later this year.

I’ve been consulting a few experts in musical theatre, and we’ve started drafting some ideas that would surely work like a bomb in any big production on the national stage.

We’re still working out who the real protagonists are, but here are some initial sketches of how we could repurpose some old show tunes and pop hits to put on an even greater spectacle than we’ve ever seen in South Africa.

We’re thinking we could get Baz Luhrman to direct – he has a way with a dazzling array of different styles, all mashed up together, which could be a symbolic reference to postmodern South Africa – and indeed the world – today. It could be a bit like Moulin Rouge! set simultaneously in Khayelitsha and the large dance hall at Mahlamba Ndlopfu.

This is a big choral number, featuring a range of South Africans of all colours and creeds. It could be inserted at any point in the musical, and could make a good opening number, just to set the scene, but it would perhaps work best in a Covid-infested moment. It could go at the beginning and the end, in fact. It is not based on N.W.A.’s Express Yourself (“And now I’m living in correctional facilities”) but on the Madonna song of the same name:

Long-stem roses are the way to your heart

If your heart isn’t already dead

But lots of people don’t have beds

… and so on. It could also work as an encouragement to read Daily Maverick, especially Maverick Citizen – “Put your love [of South Africa] to the test…”

Based on Abba’s Mamma Mia, this is for JZ to sing. He won’t have a big role in the musical, but he’d be good for a heavyweight cameo, like Marlon Brando at the end of Apocalypse Now. After all, his attempts to stay out of court make the longest-running telenovela in South African history. It would start so:

I’ve been cheating you since you don’t

And now I’m so sad it must come to

And then the chorus, as Zuma challenges another ruling, which would be sung by his backing singers, Mzwanele Manyi and Dudu Myeni:

My, my, we just can’t neglect you…

And the rest of the nation joins in to sing:

Msholozi, does it show again

How much we just don’t respect you

I Fought the Law and the Law Won

This one’s for Ace, and we don’t even need to change the lyrics much. He could also come back for a rendition of the aforementioned N.W.A. song about being in “correctional facilities”, but there is some doubt he’d be able to master the complexity of those lyrics.

Freedom Fighters, when you talk the

My body temperature begins to rise

you’re the only ones

Freedom Fighters, when you walk the

Perspiration begin to cover me

Flowing down my body…

This is a love song, sung by Herman Mashaba to the EFF. It’s adapted from Mbongeni Ngema’s Sarafina (I, not II), and I imagine that, to get the rights, we may have to offer Ngema some money – hopefully not as much as he got from Nkosazana Dlamini “No Hyphen” Zuma. But then, we’ll surely get some big producers on board, so that shouldn’t be too much of a problem. We’re in talks with the biggest – Belt and Road Productions Inc.

Right, so those are just a few ideas we’re working on. We’d be keen to hear from any citizens who may be able to help us develop these concepts. You could even get a role as an extra in this musical extravaganza. We’re fairly sure, actually, that it will end with a parade of all the players, major and minor, across the stage, with the audience joining in for a rousing singalong of Bring Me My Machine Gun. DM168

This satirical column first appeared in our weekly Daily Maverick 168 newspaper which is available for R25 at Pick n Pay, Exclusive Books and airport bookstores. For your nearest stockist, please click here.