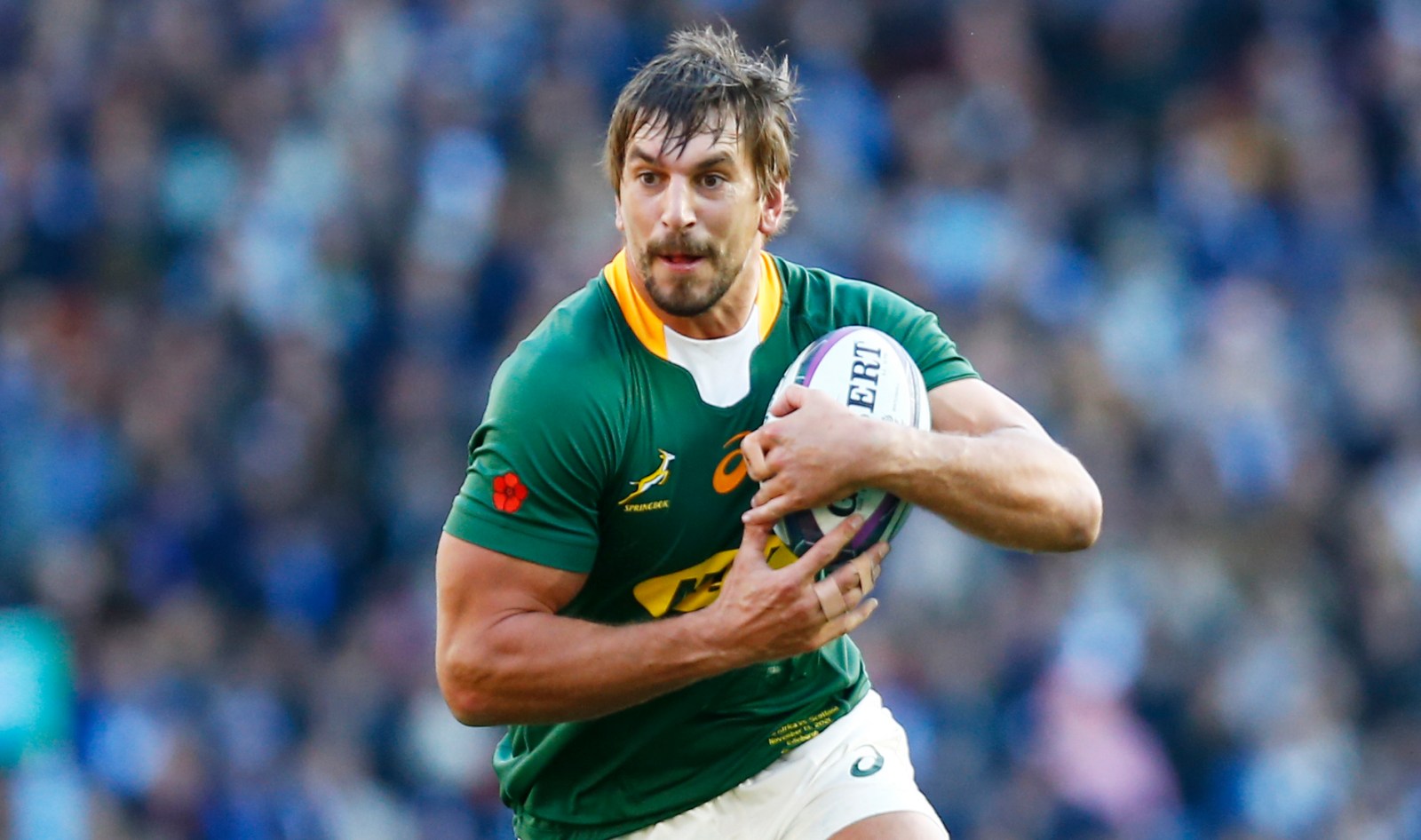 Recruiting global superstars shows that the Sharks are serious about living up to the hype as SA rugby’s superstars.

The Sharks continue to lay the foundations for a prosperous future in the European Rugby Champions Cup tournaments and Currie Cup. The drive to recruit global superstars who can fulfil multifaceted roles on and off the field highlights the franchise’s desire for titles in the short- and middle-term.

Meanwhile, the appointment of South African sevens visionary Neil Powell as the new director of rugby speaks to their grander, long-term ambitions. As detailed in a previous edition of DM168, Powell and Marius Schoeman are recognised as the pioneers of a holistic system that has yielded three World Rugby Sevens Series titles over the past five seasons. Powell is clearly the man you want when you’re looking to build an empire.

The top-ranked Blitzboks remain on track to claim yet another Sevens Series title in 2022. They are well placed to succeed in the subsequent Commonwealth Games and World Cup Sevens tournaments. Following that, Powell will transition from sevens to fifteens and take up a wide-ranging – and possibly game-changing – position at the Sharks.

Adding substance to the hype

The Sharks’ appointment of Powell should not be understated. Along with others in the coaching structures and administration, he will be responsible for the standards that give substance to the hype.

Some have questioned whether the Sharks will deliver on their promise to become South African rugby’s answer to Manchester United or Liverpool. The franchise has made a series of high-profile recruitments over the past two seasons, but whether those signings will result in silverware is another matter.

Springboks Siya Kolisi and Bongi Mbonambi have swapped Cape Town for Durban. Eben Etzebeth recently confirmed that he will be joining the Sharks once his lucrative contract at Toulon in France expires in July. Argentina flyhalf Joaquín Díaz Bonilla and former Wallabies centre Ben Tapuai, among others, are also on the Sharks’ books.

It’s little wonder that they’ve been nicknamed “the Galácticos” of South African rugby, a moniker that has negative and positive connotations. Now that they boast a squad stacked with the stars, the Sharks are expected to shine. Some context is needed, though. The Sharks failed to win a single overall title during the Super Rugby era. They haven’t won the Currie Cup since 2018. Based on that record, all talk of empires and dynasties is certainly premature.

That said, they are putting some impressive building blocks into place. The coaches and players continue to talk about the new culture and mindset at the franchise. It’s one of the reasons why Kolisi moved to the Sharks in early 2021, and why Mbonambi followed suit several months later.

It’s believed that Etzebeth is earning R18-million a year at Toulon – which places him among the top-three earners in world rugby. Sharks CEO Eduard Coetzee has already confirmed that Etzebeth will take a pay cut when he links up with the Durban-based franchise. As Coetzee pointed out recently, the Sharks cannot afford to match a figure that’s nearly a third of the allotted R65-million salary cap.

Etzebeth was nominated for the 2021 SA Rugby Player of the Year award after he produced a series of stellar performances for the national side. If fit, the lock will win his 100th Test cap later this year. He is also expected to travel to the 2023 World Cup in France as part of the Boks’ leadership group.

Toulon president Bernard Lemaître recently stated that Etzebeth is a “handicap” to the club and not worth his salary. Bok legend Bakkies Botha – who had a successful career in SA and later with Toulon– questioned Etzebeth’s commitment and why he had failed to complete his contract with Toulon.

The latter prompted a response from Etzebeth: “Next time you want to ENFORCE an opinion, you’ve got my number. #exspringbokteammates #onthoujouerekode [remember your honour code].”

Regardless of what the Toulon president and Botha have said, Etzebeth has had offers from other prominent clubs in France and Japan. It begs the question: why would a player in the prime of his career – a player who can demand one of the biggest salaries in the game – return to South Africa where contracts are far more modest? And why would he commit to the Sharks until 2027?

About more than money

Evidently, Etzebeth believes in what the Sharks are building. At the age of 30, he still has plenty to give as an individual player. As the most capped player in the current Bok set-up, he has a wealth of knowledge to share with the next generation. “Family and being closer to home was a big motivating factor, as well as being able to represent a great team like the Sharks,” Etzebeth said in a statement, when the worst-kept secret in South African rugby circles was finally confirmed.

Those close to the big man speak about his loyalty and commitment to his team. Injuries limited his involvement with the Stormers between 2012 and 2019, yet he was recognised as one of the side’s most passionate and dedicated performers.

Etzebeth and Kolisi came through the junior structures at Western Province, and represented the Stormers and Boks together. Etzebeth recently admitted that the Bok skipper had influenced his decision to relocate to Durban later this year.

Still, questions about Etzebeth’s move to the Sharks – who already boast so many superstars on their books – will persist. There are rumours that other World Cup-winners such as Pieter-Steph du Toit and Lood de Jager will return – possibly to the Stormers – before the 2023 World Cup. The challenges and limitations of the current salary cap have been widely discussed over the past few months. While SA Rugby tops up the salaries of South Africa’s elite players – referred to as Players of National Interest – individuals earning pounds, euros and yen are unlikely to return if money is their sole consideration.

Robbi Kempson addressed the matter on a recent episode of The Final Whistle. The former Bok prop has a lot of experience as a coach, and knows what the contracting process entails. As a commentator, he often hits the nail on the head.

“It’s going to be good to have Eben home, but I’m not sure how the Sharks can afford him really with the salary cap,” Kempson said. “It’s not for us to discuss, it’s something the administrators have to sort out in terms of how much can be spent.”

Combos at Sharks to benefit Boks

Swys de Bruin, who has coached extensively in South Africa, agreed with Kempson. The former Springbok attack guru – who was part of the national coaching team in 2018 and 2019 – explained why the signing of Etzebeth could be so important for the Sharks.

“You look at the other locks they have there, the guys coming through the academy and even an enforcer Ruben van Heerden… but that is the nature of professional sport. When you are working with a team, you try to explain to the players that [the squad] is a big puzzle, and there’s room for everyone. When a guy like Eben comes in, it just lifts the whole thing.

“I toured with the Boks a few times, and I saw that Siya and Eben were very close. They’re mates – so already there is a combination there [to help the Sharks], and it’s looking good.”

The Sharks may be in a position to field one of the strongest packs in the United Rugby Championship – and possibly the Champions Cup – from next season. Ox Nché, Bongi Mbonambi, Thomas du Toit, Etzebeth, Kolisi and Sikhumbuzo Notshe are some of the international forwards at the franchise’s disposal. The back division boasts Boks of the quality of Lukhanyo Am, Makazole Mapimpi, S’bu Nkosi and Aphelele Fassi.

These combinations will play a key role in the European competitions, and possibly in the big Currie Cup fixtures staged in South Africa.

While Etzebeth will focus on his new role at the Sharks, his partnership with Kolisi and the other Bok forwards at franchise level should benefit the national side in the lead-up to the 2023 World Cup. DM168