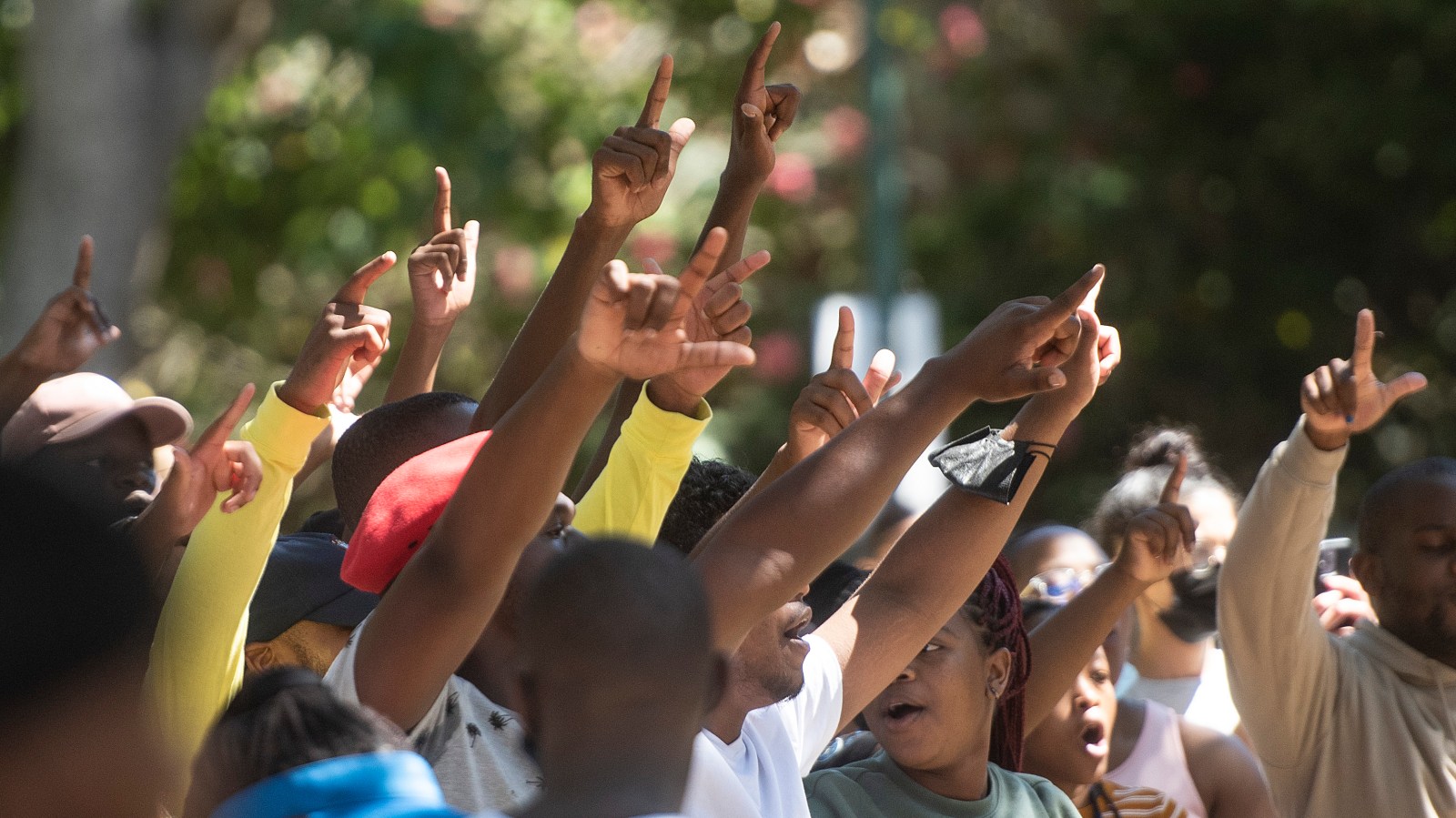 Students attend a mass meeting at the University of Cape Town on 17 February 2022, in solidarity with unregistered students. (Photo: Gallo Images / Brenton Geach)

While a cash injection of R32.6-billion into the National Student Financial Aid Scheme attempts to address the scheme’s funding shortfalls, some students were excluded from re-registering because they couldn’t pay their debts at some institution.

The announcement by Finance Minister Enoch Godongwana of a cash injection into the National Student Financial Aid Scheme (NSFAS) offers a touch of relief to the scheme’s funding shortfalls.

But in spite of the promises of a sustainable student funding model to address the funding of students in the “missing middle” category, the problems plaguing the sector continue to pile up.

Although the demands of protesters were met by temporary concessions made by individual universities, the system remains largely unchanged.

On 23 February, Godongwana announced the additional allocation of R32.6-billion “for financial support to current bursary holders and first-year students under the National Student Financial Aid Scheme”.

The Budget Review document said: “A ministerial task team is developing a new student funding model for higher education and training to be introduced in 2023.

“In the meantime, an additional R32.6-billion is allocated to the NSFAS over the medium term to continue the current bursaries for students from families with annual incomes below R350,000, and to fund the new cohort of entrants to institutions of higher learning.”

Any shortfalls in the funding of students would be covered by the Department of Higher Education and Training, Godongwana said. This would be achieved through the “reprioritisation” of its budget.

Earlier in 2022, NSFAS had to press pause on its funding decisions because it had a funding shortfall of R9.6-billion. This meant universities had to stop or extend their registration periods.

Asive Dlanjwa, national spokesperson for the South African Union of Students (SAUS), told DM168 that the union had projected a R10-billion shortfall in 2021 and had informed the Department of Higher Education in October of that year.

“The Minister of Higher Education and Training, Blade Nzimande, did nothing,” he said. “And so, when registration and the 2022 academic year started – when NSFAS had to advance funding for applicants – [it] couldn’t, and had to shut [its] systems down.”

This funding delay sparked unrest at some universities, Dlanjwa added.

Classes were brought to a halt on 14 February, the first day of the academic year at Nelson Mandela University in Gqeberha, by students protesting over registration difficulties and NSFAS’s failure to clear students to receive their funding.

Zandile Mbabela, the university’s media manager, confirmed to DM168 that some of the registration problems that students had did “lie with NSFAS, and the university is in daily communication with the scheme towards addressing any outstanding matters”.

“The late registration period is open until Friday, 4 March. The university, however, is mindful that for some students, registration also hinges on their ability to secure funding through NSFAS and external bursaries, among others,” she added.

Dlanjwa said that although SAUS welcomed the additional allocation of funds to NSFAS, there were still concerns about any shortfalls that would have to be covered by the Department of Higher Education and Training from its own budget.

Bawa said USAf was concerned about how the department would “reallocate resources”, and “hopes very much that there won’t be implications on the subsidy system, because that would be disastrous to the universities”.

He believes there is a need to “build a more sustainable financial aid system”, one that did not find itself overcome by shortcomings at the start of the academic year.

The Department of Higher Education and Training has been dealing with NSFAS’s shortfalls by reallocating money in its university budget that was originally designated by National Treasury for subsidies and infrastructure, Bawa explained. “Of course, that has serious long-term consequences for the sustainability of the system.”

In spite of increased government funding for higher education, it is clear that the number of students seeking financial aid is increasing year on year – and so is student debt.

Nzimande announced at the beginning of February that the audited accumulated gross student debt at South African universities, as of 31 December 2020, was R16.5-billion.

That amount included students who had exited universities with debt, he said.

USAf’s Bawa told DM168 that USAf had also estimated the total debt, including that of current students and those who have graduated, at R16-billion to R17-billion, although this figure was a “moving target”.

Financial sustainability remains one of the greatest challenges in the higher education sector, particularly since the introduction of fee-free education for students from poor and working-class backgrounds.

“Many institutions are hamstrung by significant student debt, collectively running into billions of rands, which essentially poses a threat to their financial sustainability,” said Nelson Mandela University’s Mbabela.

At the University of KwaZulu-Natal, 45,842 former and current students owe a staggering R2.2-billion to the institution, Normah Zondo, the university’s executive director of corporate relations, told DM168.

Cumulative fee debt at the University of Cape Town (UCT) stands at R317.8-million.

Several higher education institutions said student debt has increased substantially in recent years, and is likely to carry on rising as the economic hardships caused by the Covid-19 pandemic continue.

Fee-paying students from the “missing middle” category are the worst off and account for much of the debt, according to Bawa, who explained that these students do not qualify for NSFAS financial aid packages, but do not make enough to afford higher education fees.

Universities often bar indebted students from re-registering for their studies, regardless of their academic performance.

As a result, students and their representatives turn to protest, and call for institutions to write off the debt and allow students to re-register.

UCT saw its first week of classes disrupted by students protesting against financial exclusion linked to student registration difficulties as a result of outstanding fee debt.

Face-to-face classes were disrupted when students barricaded campus entrances, and protesting students also interfered with some online lectures, signalling a change in protest strategy in the digital age.

The UCT Student Representative Council’s demands were met when the institution agreed on 21 February to suspend the fee block on student registrations for 2022, “for students who are eligible to re-register on academic grounds”.

Although the short-term victory allows indebted students to re-register at the institution, it is clear that a new funding model that sustainably addresses the issue has long been needed.

In 2021, Nzimande appointed a ministerial task team “to investigate and make recommendations on a comprehensive student funding model”.

This week, he said the task team, with the support and involvement of Treasury, “had already started engaging the public and private financial institutions, including the banking sector, to explore the feasibility of an affordable loan scheme for students who fall outside the net of NSFAS”.

Although the Budget Review document indicates that the new student funding model will be introduced in 2023, SAUS’s Dlanjwa said he will believe it when he sees it.

“The same rhetoric has been spoken for years without any changes – ‘We have a task team’, ‘We are engaging’, ‘We are finding ways to find the funding’ – but there has been no tenable solution that has been revealed and implemented,” he said. DM168