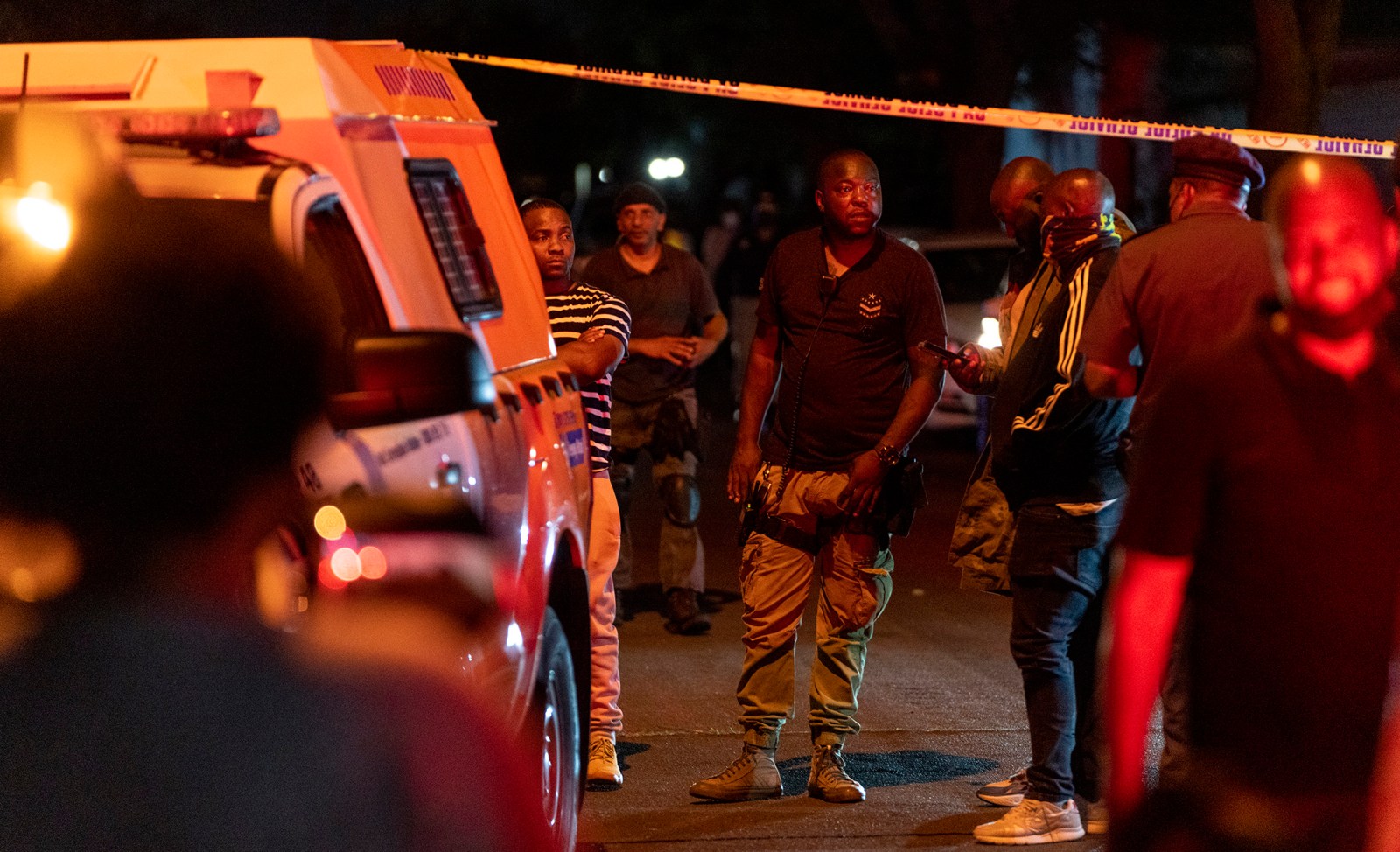 Law enforcement officials stand beside the JMPD van after it was loaded with the suspects, Johannesburg 21 February 2022. (Photo: Shiraaz Mohamed)

Another suspect has been arrested after a dramatic and fatal shootout in Rosettenville, bringing to 12 the total number of suspects apprehended.

“Our officers did not sit back and enjoy the success. They continued to work very hard to catch the suspects who escaped,” said Gauteng police commissioner Lieutenant General Elias Mawela.

Updating the media about developments since the shootout between police and alleged robbers on Monday, which left at least nine people dead and several others injured, he said:  “On Wednesday another suspect was followed to Soweto and [caught] in Tembisa.”

Police proceeded to the suspect’s apparent hideout, which did not look like residential property because there was no furniture or indication that the house was inhabited.

“It was an operational place for them. It’s just a hiding place,” said Mawela.

He said police found nine firearms and ammunition in the property, as well as a signal jammer.

A bulletproof jacket, reflectors, a cap and an undisclosed amount of cash were also recovered.

Mawela said the team worked around the clock in search of the rest of the suspects. “This morning I was informed that another one was arrested. And, again what is disturbing is that a police uniform was found on him.”

The suspect had an unlicensed firearm and ammunition in his possession. The police uniform found in the suspect’s possession was that used by junior members.

“We will continue to search for the others and we have made it very clear to them to hand themselves over or we will come and get them. The net is closing on them wherever they are,” said Mawela.

This morning’s arrest brings the number of suspects arrested for the Rosettenville shooting to 12.

The group of suspects, which Mawela estimated to be around 25, had planned to rob a cash van. He said when police pounced on them, a shootout ensued.

Several of the suspects are still at large.

It is believed that a former soldier was among those arrested on Monday.

Two of the suspects wounded during the shooting were taken to hospital under police guard.

Mawela told the media that police had deployed all the necessary resources to catch the gang.

He said the gang had planned to commit a robbery days before the shooting but that did not go ahead.

Mawela stressed that the possession of police uniform by Rosetenville gang members was worrying.

He also said when police were sweeping up the original crime scene they recovered high-calibre firearms, including five AK-47s, one R4 rifle, two DM-4 rifles, 15 reflectors, magazines and live ammunition.

The  jammer that was recovered is used by criminals to interfere with communications in their area of operation.

“We also recovered 13 vehicles. Some were hijacked some time ago,” said Mawela.

Three police officers who were injured were recovering well in hospital, including a warrant officer who was shot from the police helicopter, a constable, and a JMPD officer.

Another SAPS member was treated and discharged on Saturday.