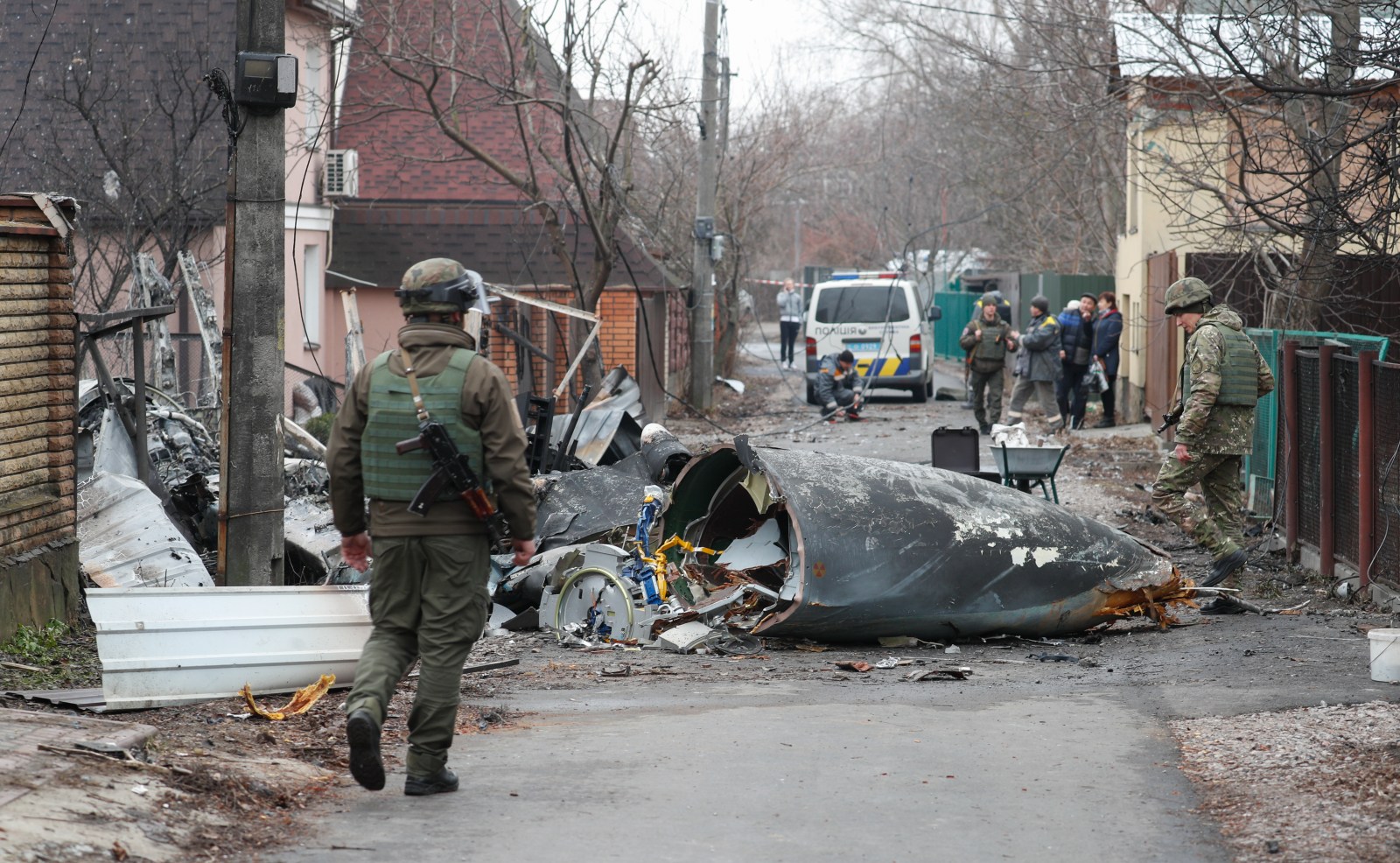 epa09783634 Soldiers look at the debris of a military plane that was shot down overnight in Kiev, Ukraine, 25 February 2022. Russian troops entered Ukraine on 24 February prompting the country's president to declare martial law. EPA-EFE/SERGEY DOLZHENKO

KYIV, Feb 25 (Reuters) - Missiles pounded Ukraine's capital on Friday as Russian forces pressed their advance and authorities in Kyiv said they were preparing for an assault aimed at overthrowing the government.

Air raid sirens wailed over Kyiv, a European city of three million people, and some residents sheltered in underground metro stations, a day after Russian President Vladimir Putin launched an invasion that has shocked the world.

Ukrainian officials said a Russian aircraft had been shot down and crashed into a building in Kyiv overnight, setting it ablaze and injuring eight people.

A senior Ukrainian official said Russian forces would enter areas just outside the capital later on Friday and that Ukrainian troops were defending positions on four fronts despite being outnumbered.

Kyiv city council warned residents of the Obolon district, near an air base seized on Thursday by Russian paratroopers, to stay indoors because of “the approach of active hostilities”.

Windows were blasted out of a 10-storey apartment block near Kyiv’s main airport, where a two-metre crater filled with rubble showed where a shell had struck before dawn. A policeman said people were injured there but not killed.

“How we can live through it in our time? What should we think. Putin should be burnt in hell along with his whole family,” said Oxana Gulenko, sweeping broken glass from her room.

A neighbour, Soviet army veteran Anatoliy Marchenko, 57, could not find his cat that had run away during the shelling.

“I know people there, they are my friends,” he said of Russia. “What do they need from me? A war has come to my house.”

Witnesses said loud explosions could be heard in Kharkiv, Ukraine’s second-biggest city, close to Russia’s border, and air raid sirens sounded over Lviv in the west. Authorities reported heavy fighting in the eastern city of Sumy.

Tens of thousands of people have fled the major cities. Dozens have been reported killed. Russian troops seized the Chernobyl former nuclear power plant north of Kyiv as they advanced on the city from Belarus. Ukraine said radiation levels were elevated there.

U.S. officials believe Russia’s initial aim is to topple President Volodymyr Zelenskiy and “decapitate” his government. Zelenskiy said the troops were coming for him, but he would stay in Kyiv.

“(The) enemy has marked me down as the number one target,” Zelenskiy said in a video message. “My family is the number two target. They want to destroy Ukraine politically by destroying the head of state.”

Russia launched its invasion by land, air and sea on Thursday following a declaration of war by Putin, in the biggest attack on a European state since World War Two.

Putin says Ukraine is an illegitimate state carved out of Russia, a view Ukrainians see as aimed at erasing their more than thousand-year history.

Putin’s full aims remain obscure. He says he does not plan a military occupation, only to disarm Ukraine and remove its leaders. But it is not clear how a pro-Russian leader could be installed without holding much of the country. Russia has floated no name of such a figure and none has come forward.

After Moscow denied for months it was planning an invasion, news that Putin had ordered one came as a shock to Russians accustomed to viewing their ruler of 22 years as a cautious strategist. Many Russians have friends and family in Ukraine.

Russia has cracked down on dissent and state media have relentlessly characterised Ukraine as a threat, but thousands of Russians took to the streets to protest against the war. Hundreds were swiftly arrested.

One pop star posted a video on Instagram opposing the war, and the head of a Moscow state-run theatre quit, saying she would not take her salary from a murderer.

Britain said Moscow’s aim was to conquer all of Ukraine, and its military had failed to meet its main objectives on the first day because it failed to anticipate Ukrainians would resist.

“Contrary to great Russian claims – and indeed President Putin’s sort of vision that somehow the Ukrainians would be liberated and would be flocking to his cause – he’s got that completely wrong, and the Russian army has failed to deliver, on day one, its main objective,” defence minister Ben Wallace said.

Ukrainians were circulating an unverified recording on Friday of a Russian warship ordering a Ukrainian Black Sea outpost to surrender. The Ukrainians reply: “Russian warship, go fuck yourself.” Zelenskiy said the 13 guards were killed by a Russian strike and would receive posthumous honours.

Ukrainians were fleeing into neighbouring Poland, Romania, Hungary and Slovakia, mostly women and children after Kyiv restricted passage for men between 18 and 60 years old.

Reuters journalists saw women crying as they bade goodbye to male loved ones and then crossed into northern Romania. Poland’s deputy interior minister Paweł Szefernaker said Ukrainian bus drivers were unable to drive across the border as conscription-age men were being held back in Ukraine.

A democratic nation of 44 million people, Ukraine voted for independence at the fall of the Soviet Union and has recently stepped up efforts to join NATO and the European Union, aspirations that infuriate Moscow.

Western countries announced sanctions on Moscow billed as far stronger than earlier measures, including blacklisting its banks and banning technology imports. They stopped short of forcing Russia out of the SWIFT system for international bank payments, drawing criticism from Kyiv which says the most serious steps should be taken now.

The U.N. Security Council will vote on Friday on a draft resolution condemning the invasion, though Moscow is certain to veto it. China, which recently signed a friendship treaty with Russia, has refused to call Moscow’s actions an invasion.

Russia is one of the world’s biggest energy producers, and both it and Ukraine are among the top exporters of grain. War and sanctions will disrupt economies around the world.

Oil and grain prices have soared. Share markets around the world, many of which plunged on Thursday at news of the outbreak of war, were mainly rebounding on Friday.

By Natalia Zinets and Maria Tsvetkova.