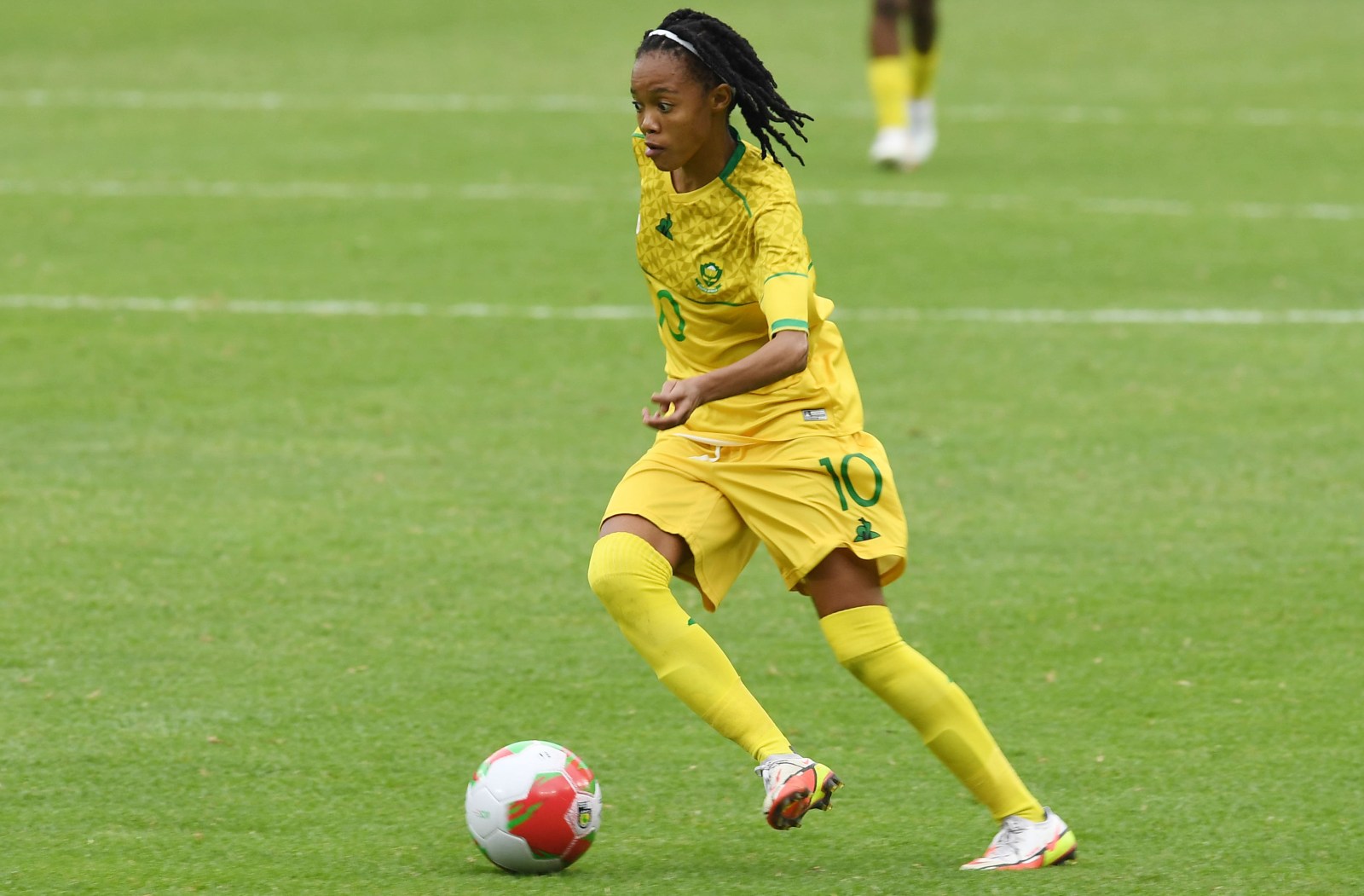 Linda Motlhalo of South Africa during the 2022 Africa Women Cup of Nations qualifier match between South Africa and Algeria at Orlando Stadium on February 18, 2022 in Johannesburg, South Africa. (Photo by Lefty Shivambu/Gallo Images)

The cast for the 2022 Africa Women’s Cup of Nations in Morocco has been finalised. South Africa are primed to be one of the protagonists when it comes around in just under five months.

Banyana Banyana showed grit and guile as they held off a spirited Algeria during a 1-1 draw to qualify for the Africa Women’s Cup of Nations (Awcon), which is scheduled to take place in Morocco in July.

Banyana headed into the tie holding a two-goal advantage after defeating the North Africans 2-0 in Johannesburg a week ago. Even then though, the Foxes had shown glimpses of their quality, without the requisite luck.

In the return leg and after landing the first blow on home soil through a Sylia Koui strike, the Algerians could not find the goal which would’ve brought them on aggregate level terms with the visitors.

Instead, Banyana took control of the tie once more as midfield maestro Linda Motlhalo netted a penalty in the second half to equalise, her fifth goal of the qualifiers and her 16th in international football. Following that goal, Banyana controlled the match to seal a comprehensive 3-1 aggregate win and qualify for the continental showpiece.

The match left South Africa’s coach Desiree Ellis satisfied with the overall result, although she bemoaned some of the team’s displays in Algiers.

“Our finishing was poor. We could have been three or four goals up by the time they scored their opening goal. Even with their goal, we could have defended better,” said Ellis after the game.

“But this team has a lot of courage and determination. They have been in this position before and we just needed to keep on playing. We felt that they (Algeria) were not a threat except for the long balls that they kept playing and the set pieces they had,” added Ellis.

“We always knew that we would get another chance and once the penalty went in, we were in control of the game and played our game. Credit to Algeria for their fighting spirit but I believe the experience that we have brought us to this point.”

Previously only contested by eight teams, the 2022 Awcon has now been extended to 12 competing nations. The South Africans join hosts Morocco, defending champions and serial winners Nigeria, as well as Cameroon, Zambia, Burundi, Burkina Faso, Tunisia, Togo, Senegal, Botswana and Uganda as the final 12 teams set to duke it out in just under five months.

Ellis’s side now has an opportunity to replicate the success of Mamelodi Sundowns Ladies, who were crowned African champions during the inaugural Caf Women’s Champions League in 2021.

In 2018, during the last edition of the biennial tournament (the 2020 edition was cancelled due to Covid-19), Banyana Banyana were edged out on penalties by reigning champions Nigeria.

This year Ellis and charges will hope to finally live up to their full potential and win the whole thing; especially as they boast some of the best players on the continent, who ply their trade in various competitive leagues around the world.

The Awcon will be played from 2 July to 23 July. DM