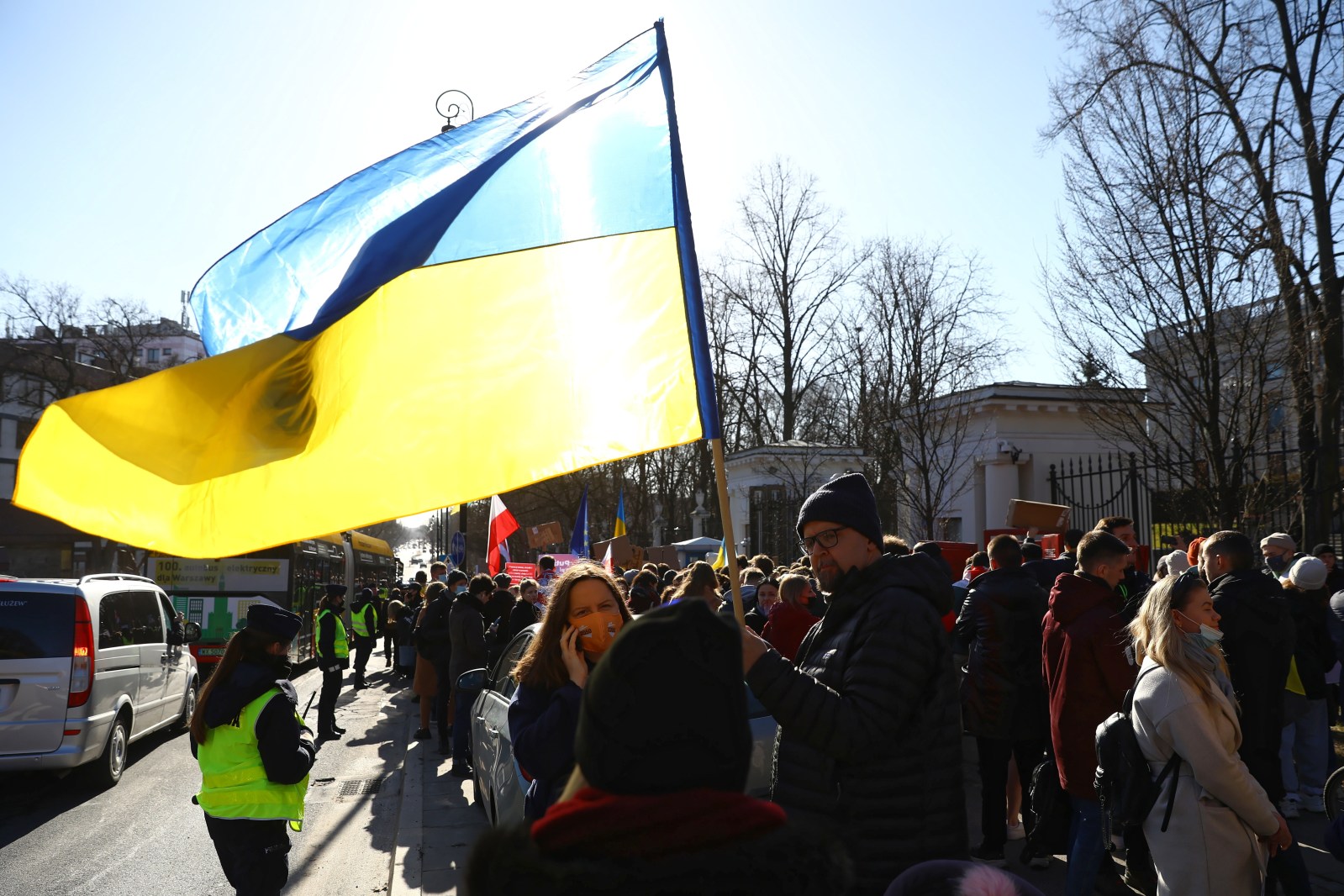 epa09780377 People demonstrate in front of the Embassy of the Russian Federation in Warsaw, Poland, 24 February 2022, in a gesture of support for Ukraine. On the night of February 23-24, Russian President Vladimir Putin announced in a televised speech the launch of a 'special operation in Donbas'. EPA-EFE/RAFAL GUZ POLAND OUT

WARSAW/BUDAPEST, Feb 24 (Reuters) - Central European countries braced on Thursday for the arrival of refugees fleeing Russia's invasion of Ukraine, with Poland setting up reception points on its border and Hungary and Slovakia planning to send troops to manage the likely influx.

The countries on the European Union’s eastern flank were all once part of the Moscow-led Warsaw Pact and are now members of NATO. Among them, Poland, Hungary, Slovakia and Romania all share land borders with Ukraine.

Earlier on Thursday, Russia launched an all-out invasion of Ukraine by land, air and sea, the biggest attack by one state against another in Europe since World War Two. It confirmed the West’s worst fears and prompted fears of a massive flood of refugees fleeing Ukraine, a nation of 44 million people. Read full story

Poland called for the “fiercest possible sanctions” against Russia and the Czech foreign minister called the invasion a “barbaric act of aggression”.

Ukrainians started trickling into Poland, with dozens arriving at the normally quiet Medyka crossing on Thursday, some carrying luggage and accompanied by children. Read full story

Polish hospitals were preparing beds for wounded Ukrainians, the health ministry said, and the Polish army raised the level of preparedness of some units.Read full story

“We will do everything to ensure that every person who enters the territory of Poland has access to healthcare, including hospitalisation,” the ministry said.

Small groups of people also fled into Hungary on Thursday through the Beregsurany crossing, some coming from as far as Kyiv, a Reuters eyewitness said. Some arrived by car, but many pedestrians were also hauling their suitcases across.

Slovakia said it was ready to help refugees.

“We can predict with near certainty that Russian aggression will drive out many Ukrainian women and men from their country,” Prime Minister Eduard Heger said. “Please let’s have compassion and understanding for them.”

A Polish government spokesman said Polish diplomatic missions in Ukraine would remain open “as long as possible” but the foreign ministry urged all Polish citizens to leave Ukraine.

Hungary also said its embassy in Kyiv remained open. The Czech Republic closed its diplomatic mission, though its consulate in the west Ukrainian city of Lviv remained open.

The Slovak railway halted services to Ukraine, and budget airline Wizz temporarily suspended all flights in and out of Ukraine. Czech Airlines also suspended flights as Ukraine closed its airspace. Read full story

There are around 260,000 Ukrainians living in the Czech Republic, and tens of thousands working in Slovakia and Hungary, which has a large ethnic minority of around 140,000 living in Ukraine just beyond the border.

Bulgarian President Rumen Radev said his country was preparing to evacuate by land more than 4,000 ethnic Bulgarians from Ukraine and was ready to host other Ukrainian refugees.

By Krisztina Than and Pawel Florkiewicz.