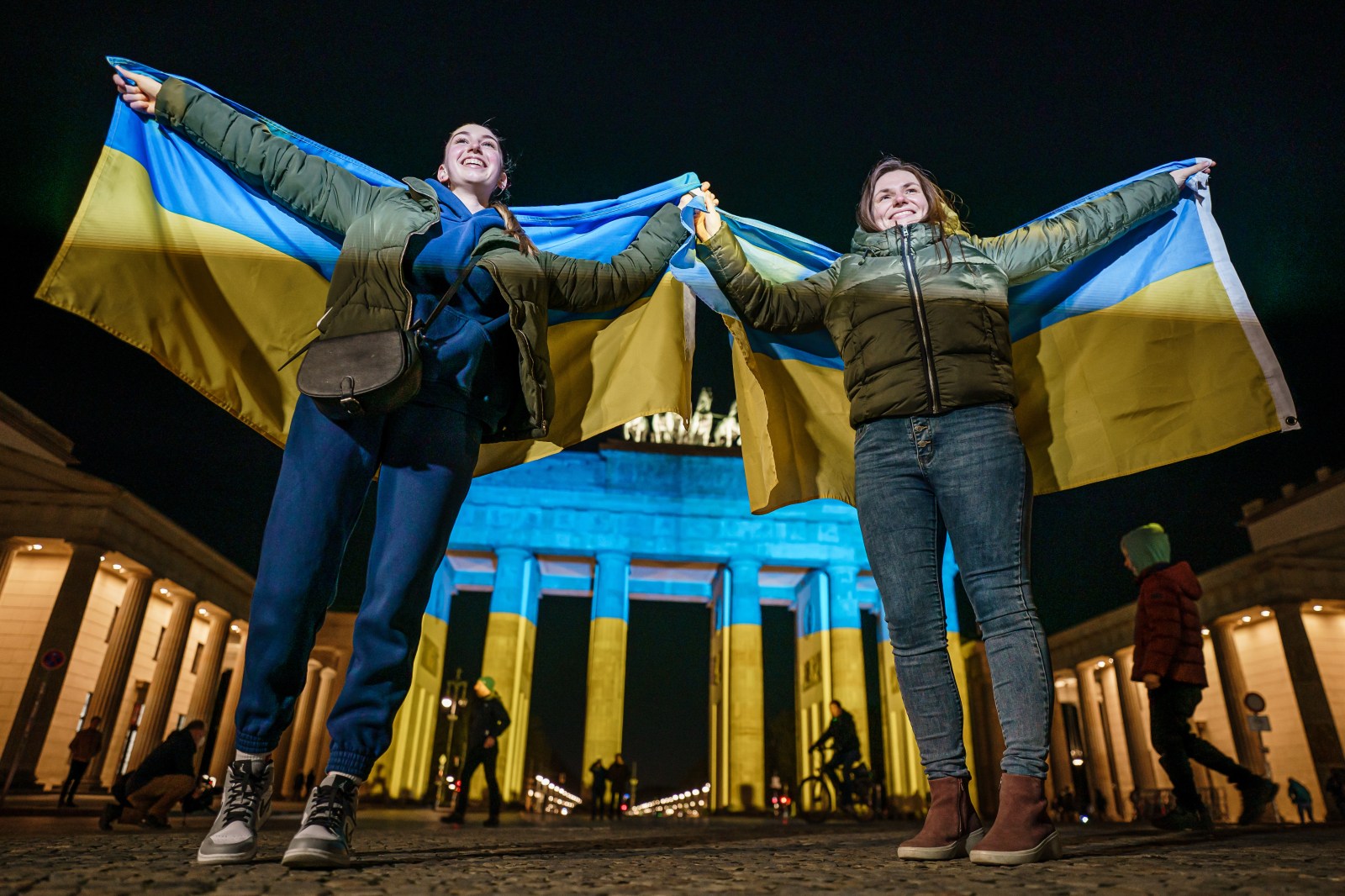 Spectators Irina (L) and Oxana pose for media in front of the Brandenburg Gate, illuminated in the colors of Ukraine, in Berlin, Germany, 23 February 2022. In solidarity with Ukraine, the Brandenburg Gate in Berlin, was illuminated in the national colors of Ukraine. Russia on 21 February 2022 recognized the eastern Ukrainian self-proclaimed breakaway regions as independent states and ordered the deployment of peacekeeping troops to the Donbas, triggering an expected series of economic sanctions announcements by Western countries. The self-proclaimed Donetsk People's Republic (DNR) and Luhansk People's Republic (LNR) declared independence in 2014 amid an armed conflict in eastern Ukraine. EPA-EFE/CLEMENS BILAN

Central European countries condemned Russia's attack on Ukraine on Thursday with Poland calling for the "fiercest possible sanctions" against Russia and the Czech foreign minister calling it a "barbaric act of aggression".

WARSAW/BUDAPEST, Feb 24 (Reuters) – The countries on the European Union’s eastern flank, all NATO allies sharing borders with Ukraine except for the Czech Republic and Bulgaria, have also started preparations to receive potentially hundreds of thousands of people fleeing Ukraine.

Czech Prime Minister Petr Fiala said on Twitter that the Russian invasion of Ukraine was an “absolutely unjustifiable act of aggression toward and independent country, which cannot remain without reaction from EU and NATO.”

Czech Foreign Minister Jan Lipavsky added, also on Twitter: “Together with Allies, we will respond to this barbaric act of aggression.”

European Union leaders will discuss a further sanctions package on Russia at an emergency meeting later on Thursday, the EU said in a statement.

By early Thursday, Hungary had not yet explicitly condemned the attack, but its foreign minister said war was “the worst-case scenario.” He reiterated that Hungary fully supported Ukraine’s sovereignty and territorial integrity.

“The task now… is to guarantee the security of Hungarian people,” Foreign Minister Peter Szijjarto said on his official Facebook page. “Our embassy in Kyiv is operating, and ready to help Hungarians who are in the Ukraine right now.”

“I strongly condemn Russia’s military aggression against Ukraine. This act undermines the sovereignty and independence of Ukraine and constitutes a grave breach of international law,” Bulgarian Foreign Minister Teodora Genchovska said on Twitter.