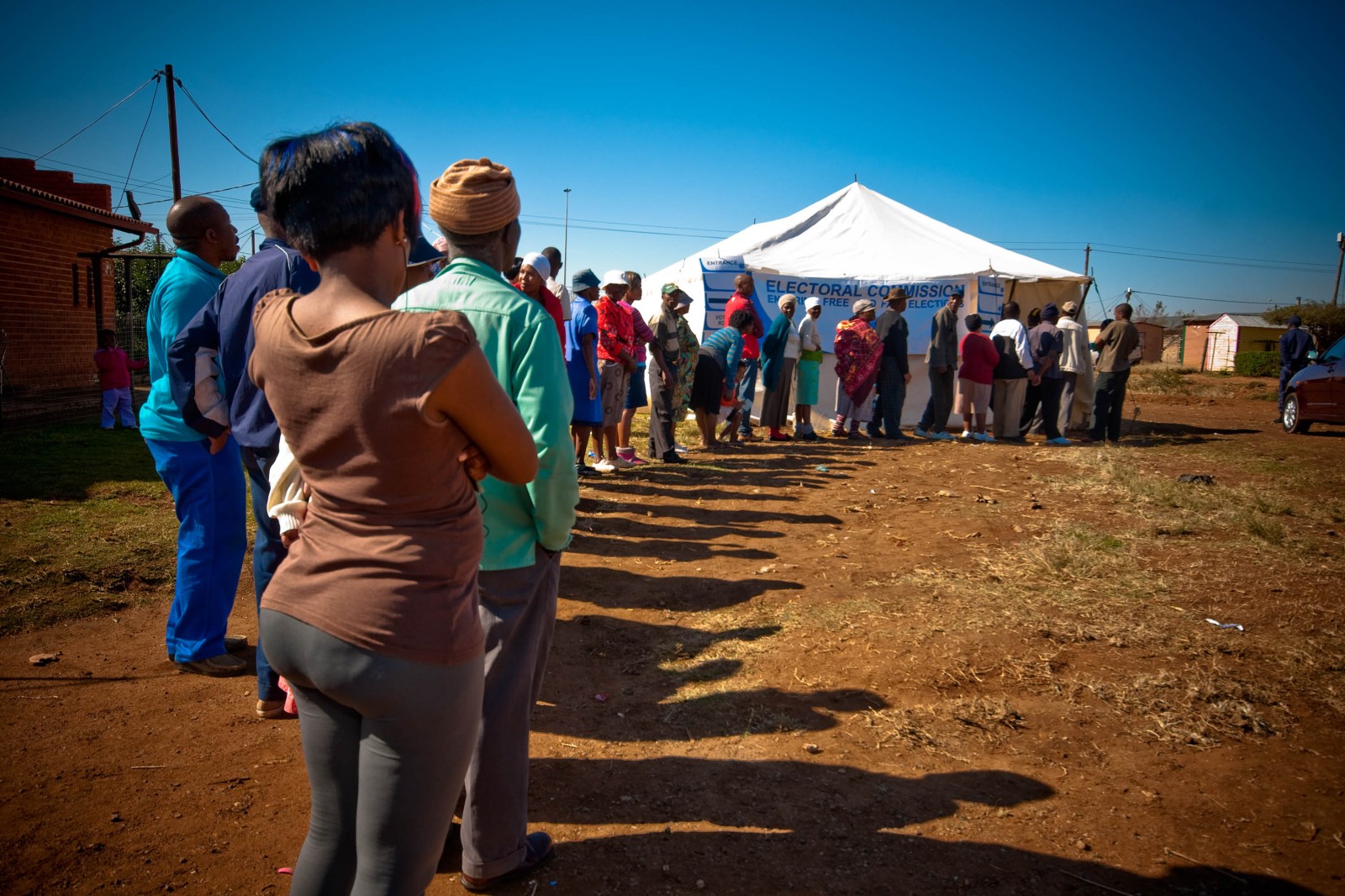 ILLUSTRATIVE IMAGE: South African residents wait in a long queue at a voting station in Sebokeng, Johannesburg, South Africa, on 18 May 2011 to cast their votes in the municipal elections. (Photo by Gallo Images/Frank Trimbos)

The ANC will be doing a post-budget victory lap after retaining all three of its wards it defended in the most recent round of by-elections. While the party obtained at least 60% in all three wards, it lost ground to the IFP, EFF and Gayton McKenzie’s Patriotic Alliance.

Wednesday’s polls were the second round of by-elections since the November local government elections. All three wards contested were safe ANC wards – emblematic of the areas where the party will need to run up the numbers in 2024 to match its performance at the national polls in 2019. This set of by-elections also gave the first insights into what voters in the ANC heartlands of Mpumalanga and North West might be considering after the last local polls.

Mahehle is a rural village northwest of Ixopo in southern KwaZulu-Natal. It lies between the Mzimkulu River and the R612 road, north of the town of Umzimkhulu. uBuhlebezwe is the municipality Acting Chief Justice Raymond Zondo hails from, and where Alan Paton’s Cry the Beloved Country was set. The ANC won 80% of the vote in Ubuhlebezwe in 2016. Its vote share fell to 69% in the November local government elections. While the ANC lost two of its 20 seats here in those elections, it still finished far ahead of its nearest challenger, the EFF, which won three seats. The IFP held on to its two seats. In short, while the ANC lost some ground in this Harry Gwala stronghold, it seemed immune from a serious challenge in the municipality.

The IFP gave the ANC a serious run for its money in Mahehle in the by-election. The ANC beat the IFP here by north of 1,300 votes in 2021, as the IFP finished third behind the red berets. The ANC garnered only 432 votes more than the IFP. The turnout was down compared with the local government elections, but not by a glaring margin.

This is a very encouraging result for the IFP. The party lost a super marginal seat to the National Freedom Party (NFP) in Nongoma in early February, but showed encouraging growth in the three other KwaZulu-Natal by-elections in that month. The IFP’s performance in an ANC stronghold is its best by-election result in the province since the local government elections – a good sign on the road to 2024. For the ANC, it adds more concern for KwaZulu-Natal.

Casteel sits on the R40 regional road between Acornhoek and Bushbuckridge. It links Mpumalanga with Limpopo. While the ANC romped home in Ward 14 in November, it would still have been concerned about its general performance in Bushbuckridge. This was one of the municipalities where the party would have genuinely expected to do better in 2021 since the former official opposition, the Bushbuckridge Residents Association (BRA), all but imploded here.

Tigane is northwest of Klerksdorp, the seat of power in Matlosana. It is just off the R503 regional road which links Klerksdorp with Hartbeesfontein. Hartbeesfontein was built around gold mining.

The ANC might have finished far ahead of the chasing pack in this by-election but its percentage vote share fell sharply. This will worry the party. It lost six seats in the 2021 local government elections and won 40 of the 77 seats, giving it a majority of three seats in the council.

This result suggests that three-seat majority cushion could be threatened if a by-election took place in a more competitive ward. The EFF and Patriotic Alliance (PA) made advances in this ward. The PA got only eight votes on the proportional ballot in November, but in the by-election it won 325. Gayton McKenzie will see a big opportunity in North West for growth. The EFF’s performance in the province in the 2021 election was a mixed bag. This result will give the party hope on that long journey across the province to 2024. The ANC beat the EFF by more than 1,170 votes in the local government election. In the by-election the margin of victory fell to 717. Turnout was also higher in the by-election.

The by-election in Ward 13 (uMzinto) in uMdoni, KwaZulu-Natal did not take place because the electoral court ruled there should be an investigation into alleged irregularities with the voters’ roll.

The next round of by-elections will be on Wednesday, 16 March when the ANC will defend four safe seats. It will also be the first foray into the Eastern Cape since the 2021 local government elections. DM

Sussman is an elections analyst with Daily Maverick.