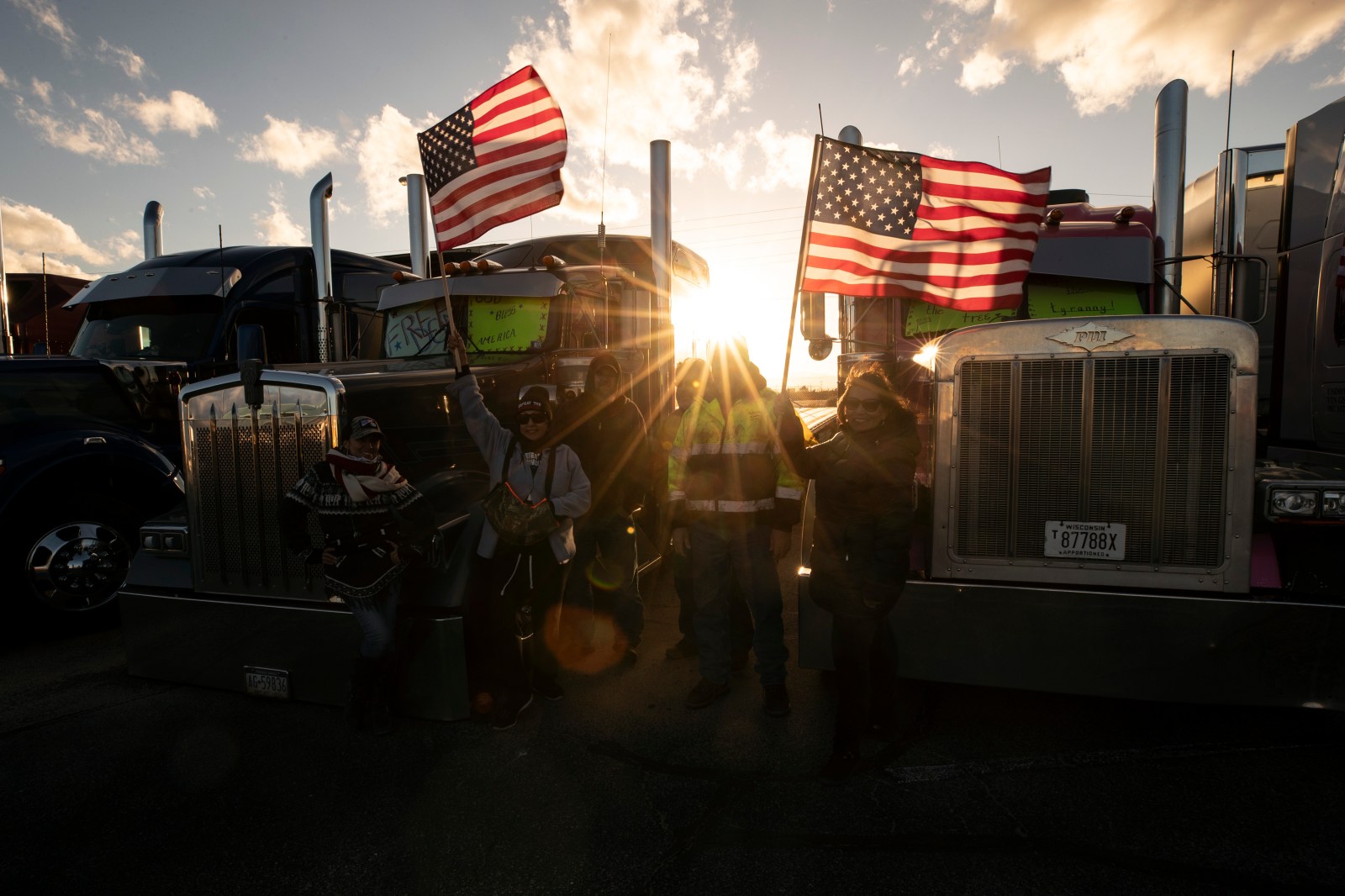 epa09777843 Supporters pose with truckers during the gathering ahead the departure of the People's Convoy, at the Adelanto Stadium, Adelanto, California, USA, 22 February 2022. Leaving tomorrow, the People's Convoy aim at reaching Washington DC to demand that the 'National Emergency Concerning the Coronavirus Disease 2019 (COVID?19) Pandemic' be lifted. EPA-EFE/ETIENNE LAURENT

Organizers of the ‘People’s Convoy’ say they want to “jumpstart the economy” and reopen the country. Their 11-day trek will approach the Beltway around the U.S. capital on March 5 “but will not be going into D.C. proper,” according to a statement.

The Pentagon on Tuesday said it had approved 400 D.C. National Guard troops to “provide support at designated traffic posts, provide command and control, and cover sustainment requirements” from Feb. 26 through March 7.

About 50 large tactical vehicles were also approved to be placed at traffic posts.

Brian Brase, a truck driver who is one of the organizers, said regardless of where the trucks stop “we’re not going anywhere” until the group’s demands are met. Those demands include an end to vaccine and mask requirements.

In Canada, pandemic-related protests choked streets in the capital Ottawa for more than three weeks and blocked the busiest land crossing between Canada and the United States – the Ambassador Bridge connecting Detroit, Michigan and Windsor, Ontario – for six days.

Prime Minister Justin Trudeau invoked rarely used emergency powers to end the protests, and Canadian police restored a sense of normalcy in Ottawa over the weekend.

“We plan to stay a while and hope they don’t escalate it the way Trudeau did with his disgusting government overreach,” Brase said from Adelanto, California, where the convoy will begin, about 80 miles (130 km) northeast of Los Angeles.

Organizers bill the convoy as nonpartisan, trucker-led, and supported by a wide range of ethnic minorities and religious faiths.

Economic growth in the United States – as in other countries – was brought to a juddering halt by the imposition of lockdowns to control the spread of the coronavirus. The economy has boomed since the government pumped in trillions in relief – it grew 5.7% in 2021, the strongest since 1984, the Commerce Department reported in January.

Meanwhile, unemployment stands at 4%, close to the 3.5% rate of February 2020, according to the Bureau of Labor Statistics. But headwinds related to strained supply chains and inflation remain.

“It is now time to reopen the country,” the protest organizers said in a statement.

Most states are already easing restrictions. In California, where the convoy begins, universal mask requirements were lifted last week and masks for vaccinated people are required only in high-risk areas such as public transit, schools and healthcare settings.

But the protesters want an immediate end to the two-year-old state of emergency, which Governor Gavin Newsom has extended.

Nationwide, new COVID-19 cases and hospitalizations due to the coronavirus have plummeted from all-time highs hit a month ago, but nearly 2,000 people per day are still dying and the number of total deaths is closing in on 1 million since the pandemic began.

(Reporting by Omar Youis in Adelanto; Additional reporting and writing by Daniel Trotta in Carlsbad; Editing by Rosalba O’Brien)