Spread betting the order of the day for political party... 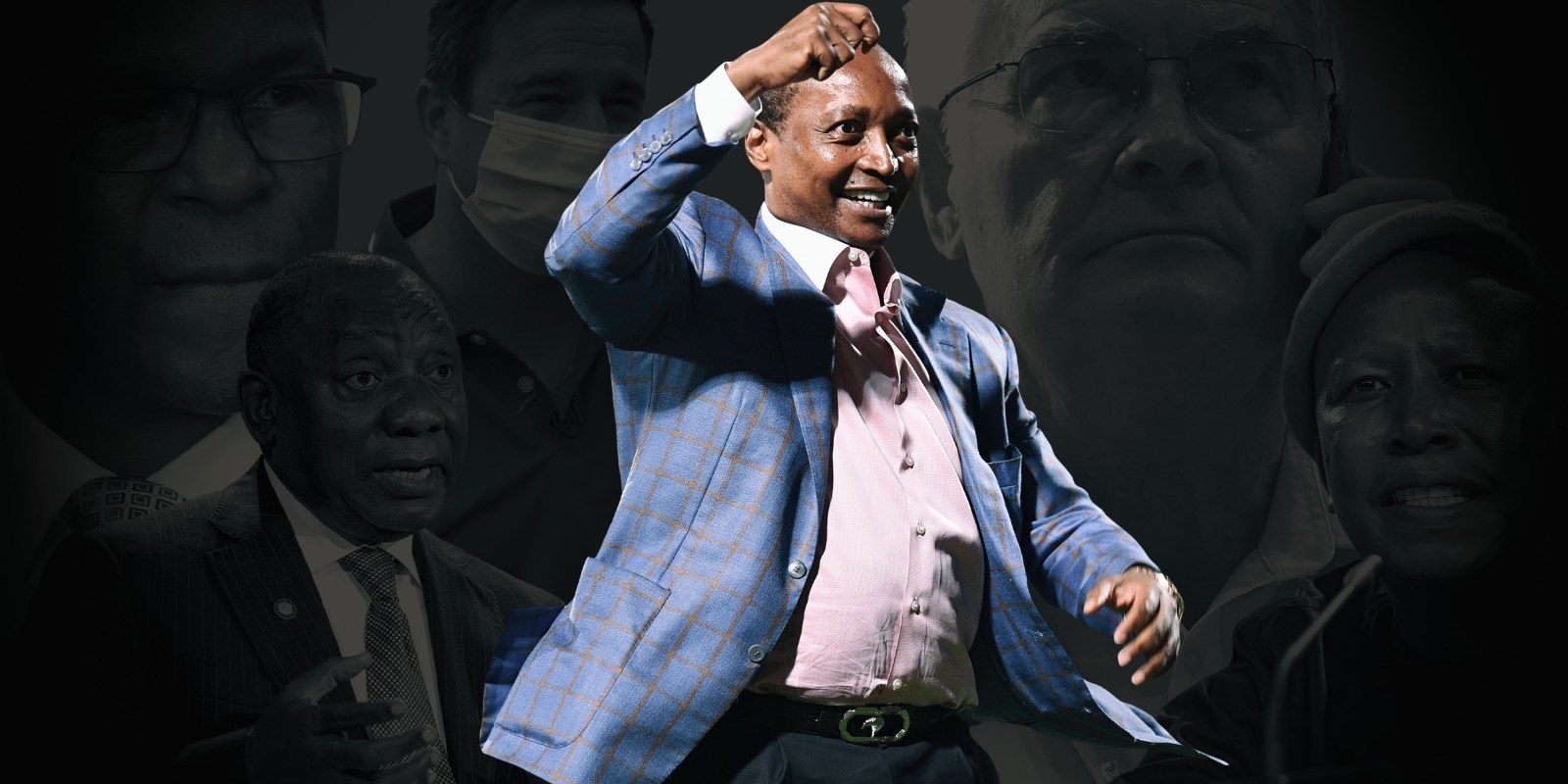 The third set of disclosures of donations made to political parties over the 2021/22 financial year was released by the Electoral Commission this week. In a noticeable shift from what was previously evident, multiple donors have taken to spreading the money between parties — avoiding any possible reputational fallout from donations.

The lead-up to elections is the period when political parties are most in need of cash, and the latest disclosures on South African political funding suggests that parties were working the phones hard directly before the November 2021 local government elections.

The majority of donations made to South African political parties in the 2021/22 third quarter are registered as having landed in October 2021, when cash-strapped parties were seemingly making last-ditch financial appeals to donors to support their final campaigning pushes.

That the total amounts disclosed were ultimately lower than for the first quarter of the year might seem counterintuitive from that perspective, but one reason probably lies in the ceiling the funding legislation places on donations to one party from a single source over the course of the year. The DA, for instance, had already disclosed donations of R15-million from Oppenheimer daughter Mary Slack and billionaire tech entrepreneur Martin Moshal in the previous two quarters, meaning that Slack and Moshal are not permitted to make further donations to the party until the next financial year.

The perennially cash-strapped ANC, which continues to claim to face difficulties in paying its employees, was once again the party registering the highest amount of donations — just over R56.1-million. This brings the total amount of donations disclosed by the ANC over the financial year to around R89.5-million.

Its closest rival in the donation stakes remains the DA, hauling in just under R45.4-million this quarter to raise its cumulative donations to around R78.4-million over the three quarters.

So far, this tallies closely with the patterns established by the first two sets of disclosures released by the Electoral Commission (IEC). But this third set was noticeable for two new trends: the expansion of the number of political parties declaring donations over the reportable threshold of R100,000, and the tendency of single donors to spread the cash around among multiple parties.

The latter is certainly the most politically neutral way of expressing financial support, even though no single donor has yet been registered as willing to donate significant sums to all parties represented in Parliament.

The most eyebrow-raising disclosure in this regard was the revelation that mining magnate Patrice Motsepe’s companies donated to both the EFF and the Freedom Front Plus, which is possibly the most emphatic display of political non-partisanship one can imagine — even though the EFF got roughly twice as much.

Motsepe, through the companies Harmony Gold Mining and African Rainbow Minerals, seems to have simply decided to award money on a sliding scale to the five largest parties: he also donated to the IFP, and a large sum (more than R4.2-million) went to the DA. But the bulk of his largesse continues to be reserved for the ANC, with a R5.8-million donation to the ruling party.

Over the previous two quarters, the majority of the ANC’s funding has been revealed to come from just three sources: President Cyril Ramaphosa’s personal fortune, Motsepe, and the ANC’s investment vehicle Chancellor House.

This time around, Chancellor House and Ramaphosa were nowhere to be seen — but instead, another ANC-linked trust stepped into the breach. Batho Batho, a trust established 30 years ago by Nelson Mandela and other ANC veterans, gave the largest single donation this quarter: R15-million to the ANC.

Batho Batho owns a majority stake in Shell’s local BEE partner Thebe Investment Corporation, which has given rise to accusations of conflicts of interests due to Mineral Resources Minister Gwede Mantashe’s vocal support for Shell’s exploratory activities in southern Africa — although Thebe has previously said it is not involved in Shell’s exploration arm.

The point remains, however, that the ANC seems to noticeably struggle to attract significant funding from outside its own inner circle: Motsepe is Ramaphosa’s brother-in-law; both Chancellor House and Batho Batho are effectively ANC financial vehicles. Perhaps external would-be donors fear funds channelled to the ANC will inevitably be misused.

This quarter, without directly ANC-linked donations, the party would have raised less than R2-million. Seen in combination with the ANC’s shrinking electoral fortunes, this evident lack of confidence from the moneyed classes has to be viewed as a sign of the party’s general decline.

Media company Naspers made good on its 2021 pledge to give equal financial support to the DA and the ANC through a R1-million donation to the ANC; the DA had its turn last quarter. The sole remaining ANC donor was 3Sixty Health, a health administrator founded by Dr Nthato Motlana, which followed Motsepe’s spread-betting approach on a much smaller scale and gave money to the ANC, the African Transformation Movement, the EFF, Good and the Patriotic Alliance.

This is the first quarter in which the EFF has made any financial disclosures, despite widespread scepticism — given the party’s elaborate 2021 election campaign — that the Fighters could indeed have received no donations whatsoever above the R100,000 threshold previously.

What we learnt: the EFF is not above taking money from White Monopoly Capital, as its R100,000 donation from South African Breweries suggests, or from private mining companies like Motsepe’s despite its stated passion for nationalising the mines.

The EFF also disclosed a R100,000 donation from one “Mr SN Maseko”. It seems likely that this is Telkom CEO Sipho Maseko, who was an honoured guest at an EFF gala dinner in 2019 and has been accused by unions of having ANC and EFF politicians “in his pocket”, partly by allegedly giving them gifts of cellphones.

This is also the first quarter in which the Freedom Front Plus has made financial disclosures, which has also caused sceptical mutterings, given the perception in some quarters that the party is awash in Stellenbosch money. To date, however, the sole donation disclosed by the FF Plus is from a black donor: the roughly R485,000 it received from Motsepe this quarter.

The real Stellenbosch money still appears to be channelled to the DA, which received its biggest donation this quarter (R5.1-million) from a Stellenbosch financial equity company linked to Capitec’s Michiel le Roux.

It was the leanest quarter yet for Herman Mashaba’s ActionSA, which cannot be attributed to the party’s post-election leadership turmoil as its monetary donations were made before the local government elections.

ActionSA’s largest declaration this quarter was a R4.2-million “in-kind” donation from a company called Pty Props SA. The party’s Michael Beaumont told Daily Maverick this was for personal protective equipment to be distributed to “organisations in need” during the Omicron wave.

Both ActionSA and the DA also benefited from in-kind and monetary donations from German organisations Konrad-Adenauer-Stiftung and the Friedrich Naumann Foundation respectively. The IEC has stressed that both contributions were permissible in terms of the regulations governing foreign funding, but it is a point of interest, regardless, to see which local political parties foreign funders view as worthy of support.

The Friedrich Naumann Foundation was unable to meet Daily Maverick’s deadline for comment, but Konrad-Adenauer-Stiftung’s local project manager, Christiaan Endres, told Daily Maverick that its in-kind donation to ActionSA, in the form of training for party representatives, fell within the foundation’s support worldwide for parties which “subscribe to the constitutional principles of their country” and which “do not promote extremist principles”.

The third set of financial disclosures also supports the notion that if you’re wanting to launch your own political party, it helps to have spare cash personally available. Politics is indeed a rich man’s game. Although Ramaphosa didn’t bail out the ANC this time around, Herman Mashaba (ActionSA), Gayton McKenzie (Patriotic Alliance) and Raynauld Russon (Shosholoza Progressive Party) all made donations to the parties they founded and currently lead. DM