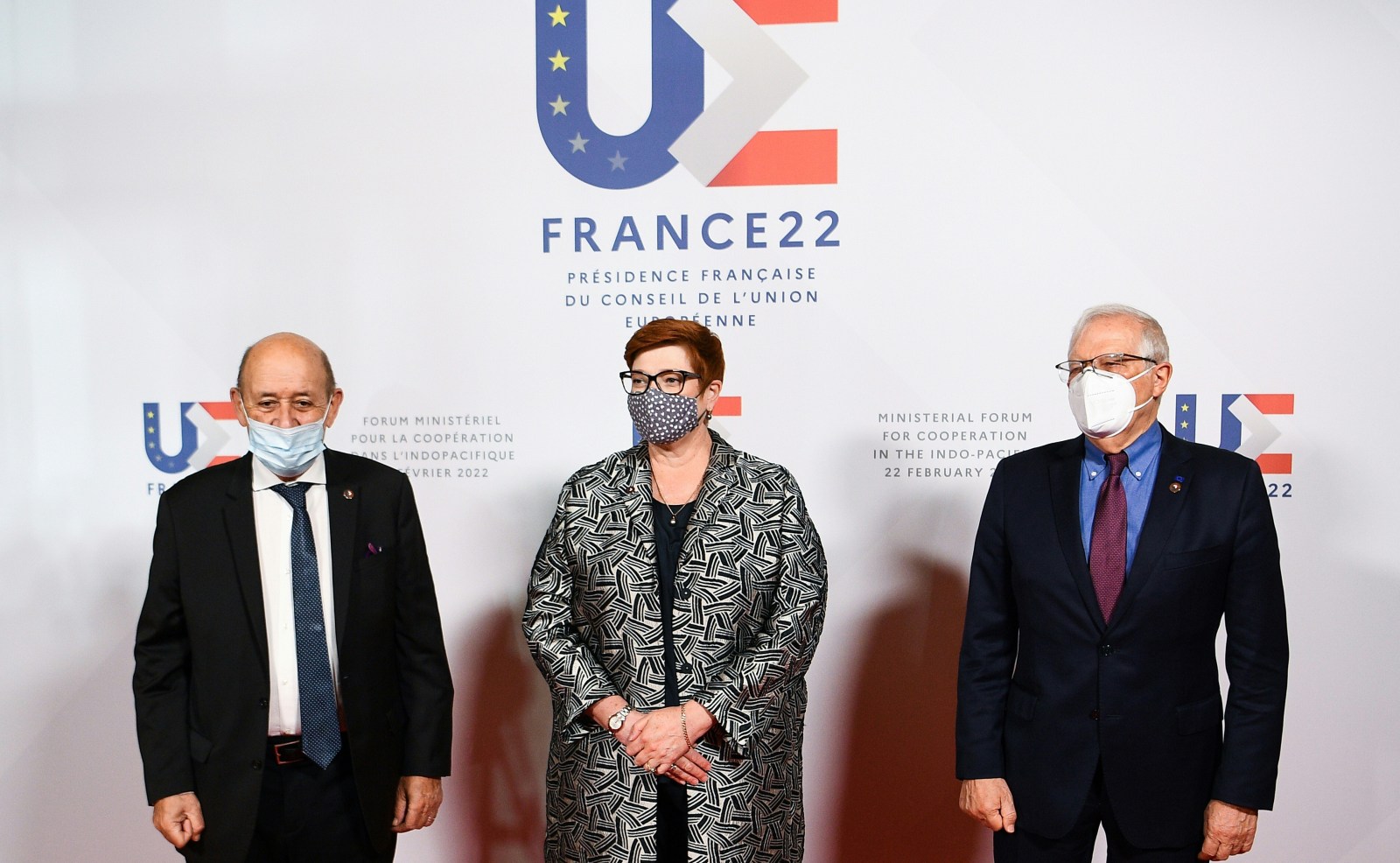 South Africa ducked the Paris meeting, apparently because of concerns that its real purpose was to devise a strategy to contain China, which is growing more assertive in the region and worrying other countries.

Russia and China both dominated the first meeting between the European Union (EU) and the Indo-Pacific region in Paris on Tuesday – even though neither country was present.

And South Africa ducked the Paris meeting, apparently because of concerns that its real purpose was to devise a strategy to contain China, which is growing more assertive in the region and worrying other countries.

Russian President Vladimir Putin’s decision this week to officially recognise two separatist regions, Donetsk and Luhansk, in eastern Ukraine and to order Russian “peacekeepers” into those regions became the main topic in exchanges between the media and the foreign ministers attending the forum.

France co-chaired the forum in its capacity as the current president of the EU Council.

EU foreign minister Josep Borrell told journalists before the forum that some of the estimated 150,000 Russian troops that have been stationed on Ukraine’s eastern frontier for weeks had already entered the country in response to Putin’s order.

After the forum, Borrell chaired a meeting of EU foreign ministers who agreed to impose sanctions on Russia in response. Borrell called it a “bleak day in the history of Europe” but vowed that the Ukraine issue would not distract the EU from its first meeting with the ministers of the Indo-Pacific.

China was conspicuous by its absence from the invitees to that forum, which reinforced the suspicion among observers that the real purpose of the meeting was to find ways to counter Beijing’s increasingly assertive behaviour, including staking aggressive claims to disputed islands in the South China Sea and elsewhere.

French officials said neither China nor the US had been invited, to avoid the forum becoming a shouting match between the two rivals.

But both Borrell and French Foreign Minister Jean-Yves Le Drian, who co-chaired the forum, denied that its intention was to form a bloc against China. “It’s not against China or anyone,” Le Drian insisted. “It’s about the development of partnerships between the European Union and the Indo-Pacific…”

He suggested the test of the partnership would be the many concrete projects that were growing out of it.

The partnership stands on three pillars; connectivity and digital technology; global issues such as health and combating climate change; and security and defence, French officials said.

The health discussion included elaboration of plans to expand vaccine-producing capacity in Indo-Pacific countries. This would include helping Indonesia to become one of the manufacturing “spokes” in the South African hub which is developing an mRNA Covid vaccine, with support from the EU and some of its member states.

One of the goals of the digital partnership is to ensure the digital privacy of the individual, French officials said. This project could be interpreted as an implicit alternative to Chinese company Huawei’s growing international dominance in the supply of 5G digital technology. Some Western countries claim Huawei is obliged by Chinese law to hand over to Beijing’s intelligence agencies any information they demand about its customers.

In the security and defence pillar of the EU-Indo-Pacific partnership, the most significant initiative seems to be the expansion of a coordinated maritime presence in the region, partly to help keep maritime routes open to all, as Le Drian pointed out at the press conference after the meeting.

The EU’s special envoy for the Indo-Pacific, Gabriel Visentin, told journalists that the first area of such a coordinated maritime presence in this new strategy would be the northwest Indian Ocean at the Strait of Hormuz, the strategically critical chokepoint between the Persian Gulf and the Gulf of Oman.

He said this area lay just to the north of the zone of Operation Atalanta, the EU naval force which is helping combat piracy off the Somali coast.

Visentin said other operational areas of coordinated maritime presence could be added, including the Mediterranean and the Black Sea. He did not rule out one in the South China Sea, which is where China is aggressively asserting its claims to several islands, and restricting the freedom of movement of ships of other nations.

Both France and the EU have recently developed Indo-Pacific strategies. France has a particular interest in the region as it regards itself as partly an Indo-Pacific country through its island territories there. Le Drian noted that because of all these islands in the two oceans, about 93% of France’s exclusive economic area was in that region.

Borrell said the Indo-Pacific had become one of the most dynamic regions in the world. This had recently come to the world’s attention when European customers found themselves waiting for a year to buy a car because of the disruptions of supply chairs from the Indo-Pacific region where most microprocessors and computer chips were made.

He said the EU and Indo-Pacific region together conducted about 70% of world trade and represented almost two-thirds of global GDP.

International relations minister Naledi Pandor was invited to the forum, as South Africa occupies a strategic position at the southwestern entrance to the Indo-Pacific region. Pretoria kept France and the EU guessing for a few weeks about whether Pandor would attend.

She had been in Brussels for the African Union and European Union summit and stayed on for the Munich Security Conference. But in the last few days, South Africa informed France and the EU that she would not be attending and that SA ambassador to France Tebogo Seokolo would represent the country instead.

French officials said Pandor’s absence was just a scheduling problem “and we don’t believe that they are sending any message”. They also said Seokolo had attended the meeting, but he told Daily Maverick that he had not been there. He did not say why.

However, earlier, official sources had said Pretoria was in two minds about attending the forum because it suspected it was an anti-China initiative.

Though Le Drian and Borrell denied this and China’s name was not officially mentioned, its presence as a motivating force could be implied in some of the agreements, discussions and projects, such as the coordinated maritime presence and the plans to develop digital networks which respected individual privacy.

South Africa’s absence diminished an already low representation from Africa. Kenya and Madagascar were also invited. Madagascar attended but it was not clear if Kenya did. Visentin said the African countries had not intervened in the discussion.

Though it is, like South Africa, a fellow member of the BRICS bloc, also including Brazil and Russia, India participated fully in the Indo-Pacific forum.

And he warmly welcomed the EU’s “commitment to contribute to the security of the region”, saying that “its considered voice and mature capabilities are key to the emergence of a multipolar world”.

Jaishankar said the Indo-Pacific was key to the rebalancing of forces in the emerging new world order.

And though he also did not mention China by name, he seemed to have it in mind when he added that it was “essential that greater power and stronger capabilities lead to responsibility and restraint”.

“This means, above all, respect for international law; territorial integrity and sovereignty. It means economics free of coercion and politics free from the threat or the use of force. It means observing global norms and practices. And refraining from making claims on the global commons.” DM