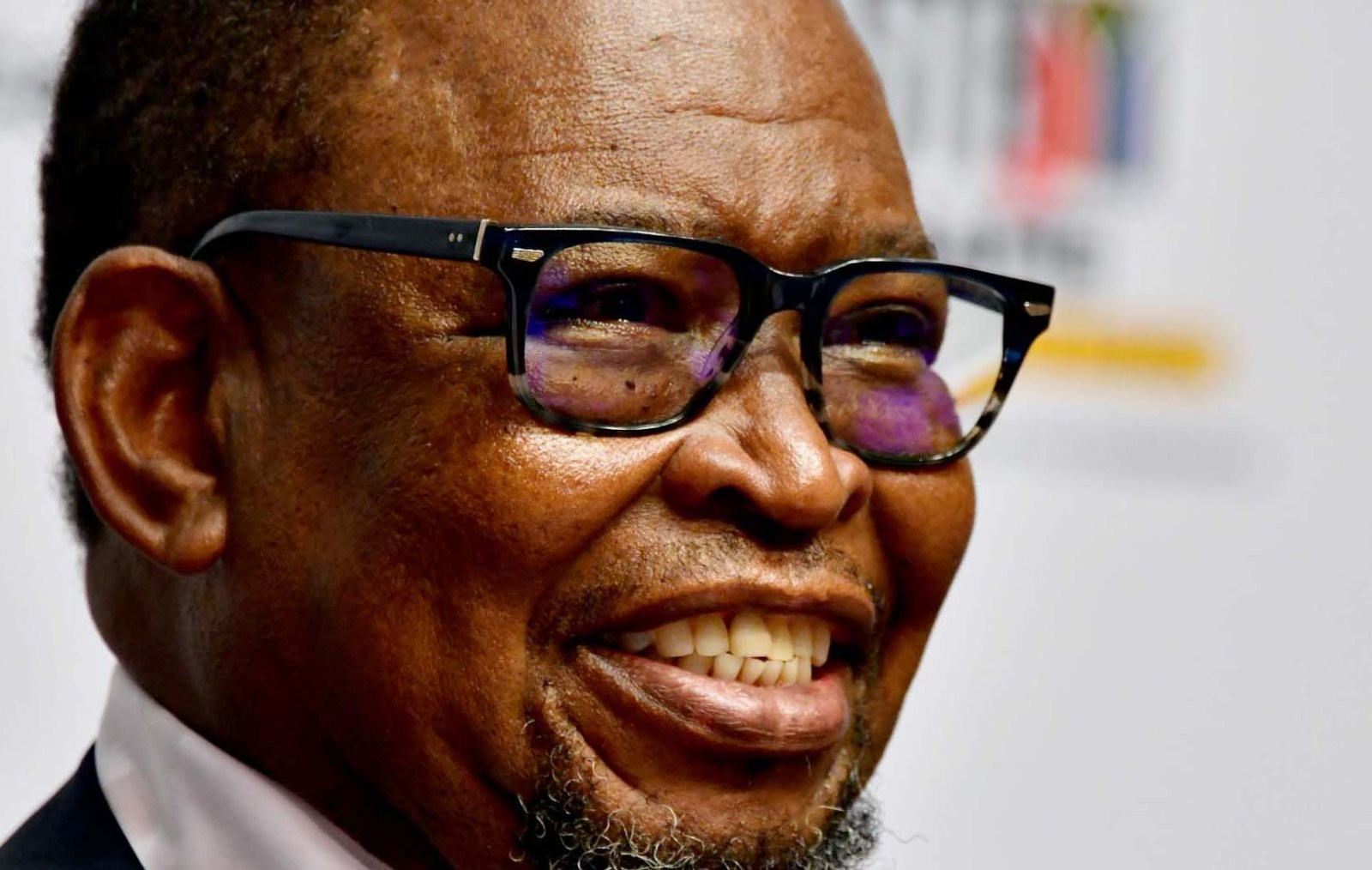 Thanks to a tax windfall there will be tax relief and an extension of the Social Relief of Distress Grant.

For a maiden budget, Finance Minister Enoch Godongwana has cleaned up well. With a tax windfall of R181.9-billion, he held back on introducing significant new taxes and even brought some relief through adjustments for bracket creep.  This is R5.2-billion in tax relief.

The employment tax incentive for companies employing young people has been doubled to R1,500 a month, and if you earn less than R91,250 a year, you don’t pay tax.

Together with tax boss Edward Kieswetter, Godongwana has not increased the fuel and Road Accident Fund levies which successive finance ministers have made hardy annual stealth taxes.

Business got a symbolic tax cut of one percentage point in the corporate tax rate to 27% – the signal it sends is more important than the value it brings. Godongwana has also changed the trajectory of the ballooning public service wage bill which has seen consumption costs crowd out capital investment (roads, hospitals, schools, broadband, etc). He plans to bring fiscal consolidation to a close in 2024/25 which will make it easier for hospitals and schools which have suffered after the brakes had to be applied after the State Capture decade.

Almost half of the windfall is being used to pare down debt which eats up 20 cents of every R1 the government earns. Godongwana is even expecting a primary surplus in 2023/24, although it excludes interest costs. Debt is at an eye-popping R4.3-trillion, which comes to us courtesy of former president Jacob Zuma’s two terms. It is projected to increase to R5.43-trillion in 2024/25.

“In 2008/9, public debt adjusted for inflation was equivalent to R22,869 for every person living in South Africa; it has since tripled to R69,291 for every person in the country. Over the same period, the real interest costs of this debt rose from R1,984 to R4,278 per person per year. Annual spending on interest payments exceeds the budgets for health and basic education,” according to the Budget Review

Zuma’s decision to fund free tertiary education without planning and his Cabinet’s sign-off on an inflation-busting public service wage deal continue to haunt the fiscus.

Lucky for the windfall, which came mostly from better-than-expected mining industry tax receipts, and better collection by the South African Revenue Service where the ship that listed under former commissioner Tom Moyane has now been steadied.

The rest of the windfall will pay for a one-year extension of the Social Relief of Distress Grant at a price tag of R44-billion, while the finance minister and Ramaphosa tussle over the architecture of a basic income payment. It won’t happen this year but can be pencilled in for the future.  The state’s insurer, Sasria, gets a R7.1-billion cash injection after the July 2021 riots and looting which were started by supporters of Zuma when he was jailed on contempt of court charges.

The former head of state’s kleptocratic reign is still like a shadow hulking over the Budget. Eskom’s reform is slow and difficult, the Budget Review states. It has registered a transmission business but its restructuring is far from complete. At SAA, Zuma’s consigliere, Dudu Myeni, crashed the airline and while Godongwana resisted another bailout, he did reveal that the sale of a stake has not yet been finalised. Denel is bankrupt. The chart shows how State Capture collapsed the state-owned companies, most of which were targeted by the Gupta racketeers. 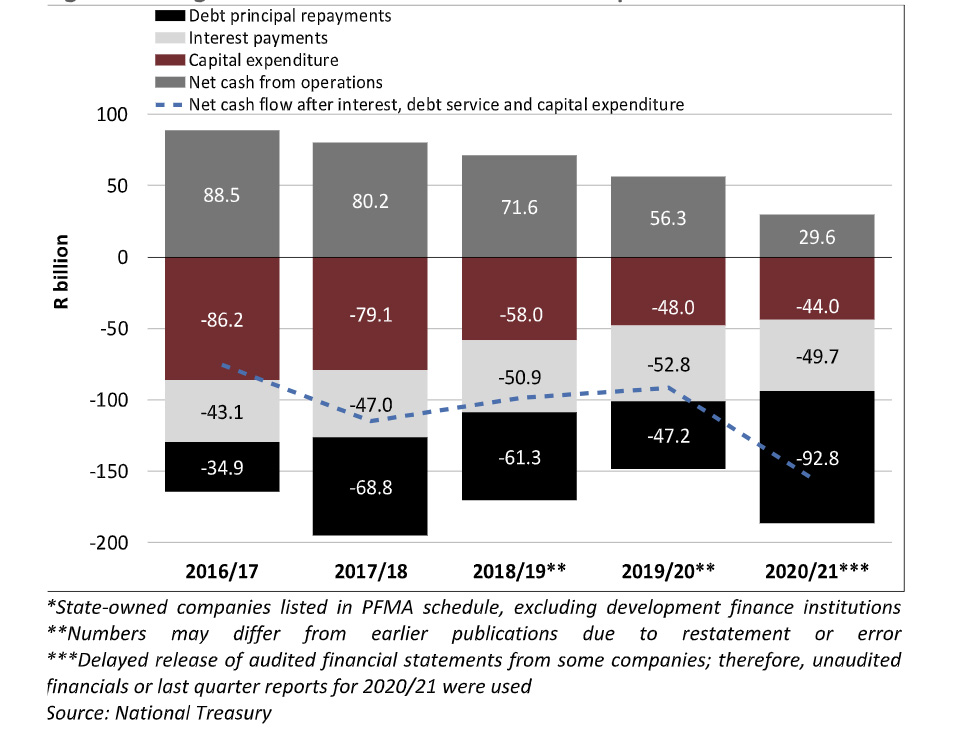 The Gupta enterprise targeted Eskom and Transnet, both of which continue to contribute to debt because the government guarantees their balance sheets. The family’s enterprise has been identified as a racketeering scheme by Judge Raymond Zondo in part two of the report by the Commission of Inquiry into State Capture. The costs of that scheme are still borne by the country, as the Budget reveals.

Unemployment is so high that almost one in two South Africans now has to get by on a grant, the Budget Review reveals. Godongwana increased grant payments but only by slightly more than inflation which means they maintained value but did not grow.

State Capture meant South Africa lost stature and confidence and that is clear from how wary people are of investing. In 2021/22, public and private investment levels were way below pre-pandemic levels. This chart shows that private sector investment is so low that it’s back at 1994 levels when business was well and truly scared for the future. 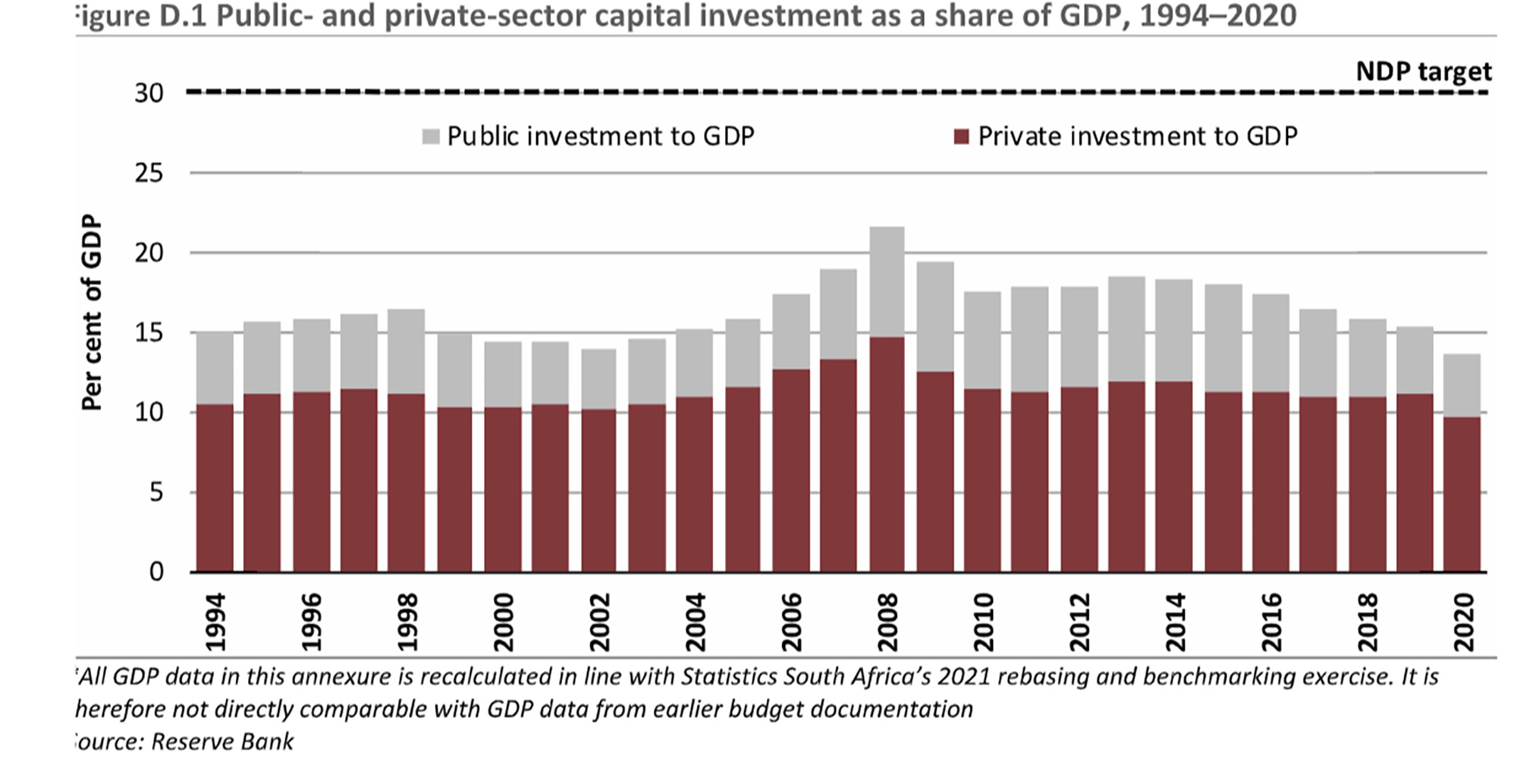 With a massive windfall as his ammo, Godongwana has done a good job of walking South Africa back from the ledge Zuma left it on. But as democracy’s founding father Nelson Mandela taught us, it is a long walk to freedom. DM