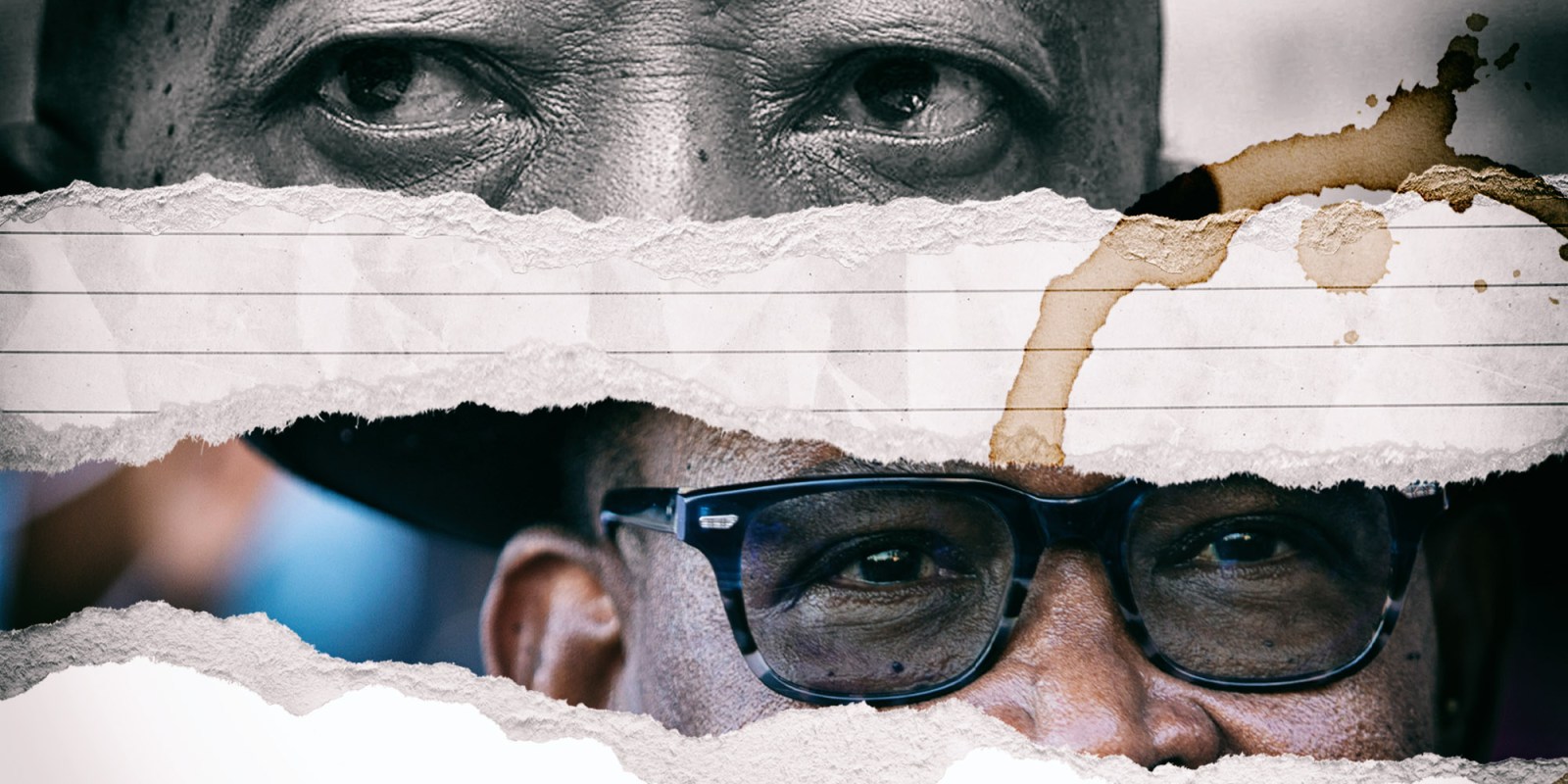 It was Finance Minister Enoch Godongwana’s first Budget. It was also this reporter’s first time at Parliament since the start of the pandemic. A lot has changed. A lot hasn’t.

Coffee. No matter what time of day, if you’re going to Parliament, take some with you. It’ll help. And it did. My coffee travel mug, the veteran of many a studio, the fuel carrier for many a Daily Maverick piece, did not let me down. Sometimes you need a little liquid refreshment to get over a shock. And the scale of the fire damage to Parliament is indeed shocking.

Arriving to present some of the coverage for Newzroom Afrika, I could not get over how small things are now. Maybe I’m just getting old, but the National Assembly, as a building, and a concept (the NATIONAL ASSEMBLY) had a proper, modern, democratic grandeur.

The one detail I could not get over was how the chamber has a very old coat of arms on the front, included is an ox wagon.

We really are talking nearly 200 years ago here. It was in 1836 that slavery was outlawed by the British government in its colonies, and the Great Trek followed almost automatically (the arguments about why it happened are still contentious today, but the banning of slavery was surely a major factor). It appears that the ox wagon was what the Republic of the Transvaal brought to the coat of arms of apartheid South Africa.

And so it was that Godongwana was destined to give his budget speech in such a hall.

One of the things you might not have felt in the TV coverage of the Budget was the noise of what was going on around Parliament. Someone had decided it was a good idea to let the EFF stage a protest right outside. By “right outside”, I mean about 20m from the broadcast points for the various channels.

And the EFF had brought a massive sound system. My overall memory of the Budget will not be the numbers, but my eardrums bruised by the loud music blasting just outside Parliament.

As an exercise in the politics of spectacle it was very clever. It made sure the EFF got a lot of attention.

It was certainly much more successful than their other gambit. At the end of the speech, EFF deputy leader Floyd Shivambu and the party’s MP Mbuyiseni Ndlozi tried to claim that the entire speech was invalid because Godongwana had not said: “I table the Budget” at the end. It turned out, as National Assembly Speaker Nosiviwe Mapisa-Nqakula pointed out, that he had said it at the beginning.

One of the joys of Parliament is that different constituencies are represented by different people. So you still, to an extent, get to speak to representatives of varied groups of people.

They have plenty to say.

But there is something missing. There are around 12 million people who are unemployed in our country. If they were a political party, they would win every election going by a wide margin. And yet, there is that nagging question: are they really represented in our Parliament in any meaningful way?

That said, there are interesting and important people to speak to.

The person of the moment, of course, was Godongwana himself.

After his speech, he was happy to do interviews, moving through the different broadcast points.

A lot can be said about a finance minister, but Godongwana has occupied an important role in the ANC for so long that he knows everyone and knows them well. Despite a long speech, in the interview chair he was friendly, funny and a joy to interview.

He strongly disputed the claim that he is against a basic income grant (BIG), saying rather that he has concerns about its affordability, and that it should be part of a much bigger comprehensive look at our social grant system.

In that, he is probably not wrong. Our system of social grants is perhaps the biggest triumph of our political freedom. But it has not been changed in some time, and the introduction of a BIG while making other changes at the same time might be the right course.

However, it could also open the door to impossible politics. For example, who wants to make the decision to lower the disability grant while increasing the child-care grant? And yet, would that be a better allocation of resources?

Godongwana is also very keen on a proper examination of our fuel price formula. He has clearly heard the pain caused by the record fuel prices, the pain felt throughout the economy.

But again, the formula was put there for a reason, and to make big changes to it now could lead to bigger problems later. (For example, how do you fund the Road Accident Fund without using the fuel price?)

One person who did indeed have a good story to tell was the SA Revenue Service (SARS) commissioner Edward Kieswetter.

It is his agency that has processed the commodities windfall which has led to the spending increases on education and the police.

But he also told Newzroom Afrika, happily, that they are making progress in dealing with the illicit economy. The joy of this, of course, is that this money will keep coming in, making this sustainable income.

He was the very figure of confidence, that there is some reason for hope, that if things continue as they are going his agency will continue to bring in more money in the medium term.

But this is also an important reminder of the impact that the former SARS commissioner Tom Moyane had on the agency, and how badly damaged it was during the State Capture era.

One of the people who had to respond to the Budget was the DA’s Dion George. I’ve always thought responding to a Budget is quite a difficult thing to do. To criticise it requires having a better idea of where to allocate money.

And for the DA, whose leader praised part of President Cyril Ramaphosa’s State of the Nation Address, it’s extra tricky. They have to both show they have a better idea, but also not fall into the trap of being too critical.

The way around this is for them to deliver an “alternative Budget” before the main Budget.

To an extent it works. George’s suggestion earlier in the week that companies found guilty of corruption should pay a higher rate of tax is the party’s second-best idea so far this year.

In person, he gives the impression of being thoughtful and helpful.

After the fun and games had ended, and Godongwana had finally gone to get some rest, the EFF had taken their sound truck away and Parliament was back to its burnt-out self, it was time to Uber and to reflect.

Later, while rinsing out my coffee travel mug, I was struck by a thought.

It is likely there will be a large amount of money spent on rebuilding our National Assembly. We should have a grand place, a democratic place, a place of coming together.

But we should also have a fully functioning Charlotte Maxeke hospital.

I think I would be ashamed as a person, as a South African, if it turns out that the building of Parliament gets more attention than the people, the patients, that Charlotte Maxeke serves. DM