What does a security guard strike reveal about the Eastern Cape health department? 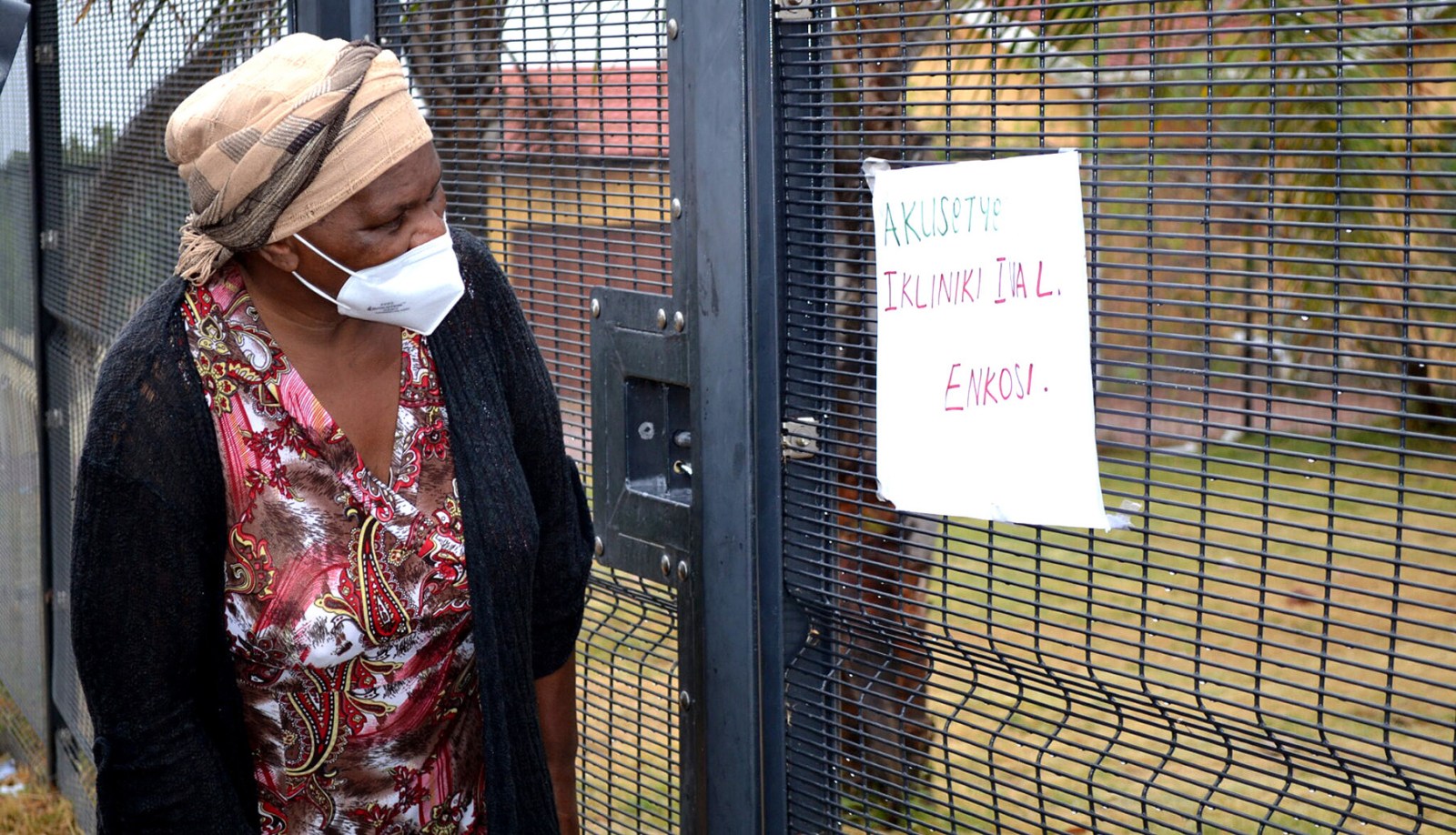 Ntombomzi Njikelana arrives at the KwaMagxaki Clinic in Nelson Mandela Bay, only to be greeted by closed gates and a sign reading: 'We are not working, clinic is closed'. (Photo: Luvuyo Mehlwana / Spotlight)

Security guards at healthcare facilities in Nelson Mandela Bay went on strike in January after their salaries weren’t paid. During the strike, healthcare workers had to close some clinics in fear for their safety, and patients were left stranded. Luvuyo Mehlwana reports on what happened and asked the health authorities what plans are in place to prevent similar incidents amid persistent budget constraints.

Hundreds of security guards based at healthcare facilities in Nelson Mandela Bay in the Eastern Cape went on strike from 25 to 28 January. While the guards were on strike, nurses at one facility were robbed at gunpoint.

Apart from the impact of the strike on staff and people depending on the public healthcare system, the strike also put the spotlight on the Eastern Cape health department’s ability to pay service providers and ensure critical services are not interrupted. Opposition politicians think more such disruptions are likely.

The security guards in question are employed by Silver Solution Security, which is contracted to provide security services to all public clinics in the Nelson Mandela Bay metro.

The broad contours of what happened are familiar enough.

The striking guards accused the company of not paying their December and January salaries. The company’s Port Elizabeth branch manager, Mark Damons, said the workers had not been paid because the company was facing “dire financial constraints” since the provincial health department was late in paying them. He said workers had been paid from the company’s reserves. On 28 January a report on eNCA quoted the province’s health department as saying that payments had been made to the company, but that there was a shortfall which had then been corrected.

Before trying to understand the underlying reasons for such payment delays, it is worth stressing that the consequences of disrupted services can be real and serious.

On 26 January, day two of the strike, a group of armed men entered the KwaMagxaki Clinic and robbed three nurses of their phones. Eastern Cape health MEC Nomakhosazana Meth condemned the robbery, describing it as “thuggery”.

At four clinics visited by Spotlight, healthcare workers blamed the provincial health department for putting their lives in danger after failing to pay the security guards.

A day after the robbery at the clinic, nurses were in a counselling session. A visibly traumatised nurse said: We were on lunch when two gunmen entered the clinic via the back door. They pointed firearms at us and demanded our cellphones and car keys before locking us inside the clinic. What happened to us is very traumatic, and it will have an impact on our ability to deliver quality healthcare to our patients.”

The strike also meant that some people in need of healthcare arrived to find clinic gates closed. Langalase-afrika Diamond, who accompanied his wife Lonwabo to the clinic so their two-week-old baby could have a check-up, had to leave without being helped. “We only discovered that the clinic was closed when we arrived here. We have an appointment for today. Now we don’t know where to go, and we are not aware when they will open. If we knew that we would not get help here, we would have stayed at home instead of moving around with the newborn baby,” Diamond told Spotlight at the time.

Although the security guards are back and the clinic gates are open, the strike has once again laid bare how budget constraints are affecting the delivery of healthcare and related services.

In a January statement, provincial health spokesperson Mkhululi Ndamase acknowledged the department was “having serious budgetary constraints, having started the current financial year with a R4.4-billion shortfall because of medico-legal claims, accruals and payables”. These budget constraints, among other things, meant the department could not extend healthcare workers’ contracts and was trying to source more funding. The statement was issued in response to disgruntled healthcare workers who demanded that their contracts be extended.

‘Bankrupt and unable to pay’

Ballooning claims for medical negligence and the impact it has on health budgets and service delivery is not limited to the Eastern Cape. In its 2020/21 audit report published in December 2021, the Auditor-General said there was an increase in medico-legal claims throughout the health sector. Payments made in lieu of medical negligence claims in the 2020/21 financial year amounted to R1.7-billion. The total claims against the health sector amounted to more than R100-billion. “If these claims are unsuccessfully defended and need to be paid out, it will further erode an already stretched budget and have a negative impact on service delivery,” the Auditor-General warned. “This financial strain also led to an increase in unpaid invoices (accruals) amounting to R15,364-million (R15.4 billion).”

In the Eastern Cape, the balance for medico-legal claims had escalated to R38.6-billion. “The department has an approved overdraft facility of (R100-billion) to help it pay these medico-legal claims, which are not within its budget. There has also been an increase in instances of the department’s bank accounts being attached due to attorneys approaching the courts. This means that at specific points the department may not be able to transact in its own bank account and has resulted in funds being transferred from other service delivery areas to pay for these medico-legal claims,” the Auditor-General said in the report.

DA MPL Jane Cowley, spokesperson for health in the Eastern Cape, said the provincial health department is “bankrupt” since it cannot pay service providers. She said it is not only security services – other suppliers across the province have not been paid.

“Companies providing medical equipment, surgical equipment, soft service, and oxygen companies have to wait until the new budget allocations in April before receiving any funds,” she told Spotlight. “Critical medical supplies for the rest of the financial year could very well be delayed, as the department does not have the money to pay for them.”

According to Cowley, in January the department requested an additional “R5.2-billion from the provincial treasury for the current financial year, of which R4.4-billion was for accruals and payables”. “The Provincial Treasury noted that they could only provide R280-million in additional funding for health, roughly 4.4% of what was asked for.”

Cowley said it was a shame that the department cannot protect its workers by paying security guards who protect these workers and their assets. “We are in this mess because of years of mismanaging the budget and allowing medical claims to grow without any settlement plan. As a result, citizens of Nelson Mandela Bay and the health workers are affected because the department is currently unable to meet its financial commitment for the financial year.” DM/MC

* This article was published by Spotlight – health journalism in the public interest.