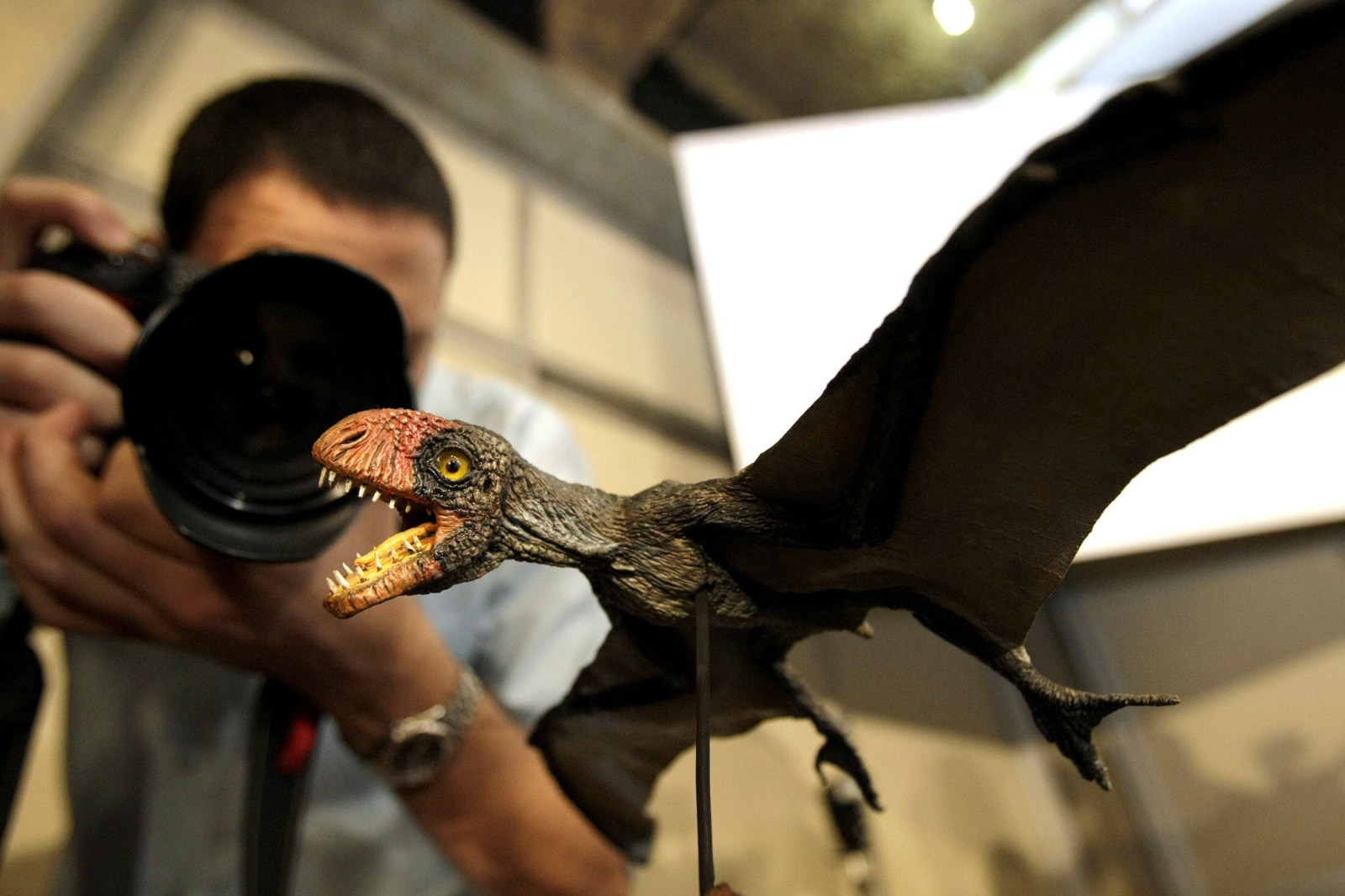 epa01816376 View of a model pterosaur which was presented along with the fossil at the National Museum of Rio de Janeiro, Brazil, 05 August 2009. The discovery shows that this flying reptiles had a 'complete flight control' as well it gives a new path on the investigations of this specimen. The fossil of the 'Jeholopterus ningchengensis' was found in deposits of near 130 million of years in Mongolia, China. The fossil was presented by Brazilian palaeontologist Alexander Kellner, who participated in the discovery along with British, Chinese and German investigators. EPA/ANTONIO LACERDA

A fossil jawbone peeking out from a limestone seashore on Scotland's Isle of Skye led scientists to discover the skeleton of a pterosaur that showed that these remarkable flying reptiles got big tens of millions of years earlier than previously known.

Researchers said on Tuesday this pterosaur, named Dearc sgiathanach, lived roughly 170 million years ago during the Jurassic Period, soaring over lagoons in a subtropical landscape and catching fish and squid with crisscrossing teeth perfect for snaring slippery prey.

With a wingspan of about 8 feet (2.5 meters), Dearc was the Jurassic’s largest-known pterosaur and the biggest flying creature that had inhabited Earth to that point in time. Some pterosaurs during the subsequent Cretaceous Period achieved much greater dimensions – as big as fighter jets. But Dearc shows that this scaling up had its origins much earlier.

A forensic analysis of its bones indicated this Dearc individual was not fully grown and could have had a 10-foot (3-meter) wingspan as an adult.

It had an elongated skull and a long, stiff tail. An arsenal of sharp teeth formed a cage when it bit down on prey.

Pterosaurs are some of the rarest vertebrates in the fossil record owing to their fragile bones, some with walls thinner than a sheet of paper.

“Our specimen, anomalously, is well preserved – retaining its original three dimensions and being almost complete, and still articulated as it would be when alive. Such state of preservation is exceptionally rare in pterosaurs,” Jagielska said.

Up until when Dearc lived, pterosaurs generally had been modest in size, many about the size of a seagull. The prevailing wisdom among scientists had been that pterosaurs did not reach Dearc’s size until the Cretaceous, some 25 million years later, with the appearance of creatures like Huanhepterus, Feilongus and Elanodactylus. Quetzalcoatlus, appearing about 68 million years ago, boasted a wingspan of about 36 feet (11 meters), like an F-16 fighter.

“In the Cretaceous, some pterosaurs got enormous. These were some of the most superlative animals that ever lived. Dearc was not close to them in size or grandeur, but it was 100 million years older. Evolution needed time to make such giants,” University of Edinburgh paleontologist and study co-author Steve Brusatte said.

In Dearc’s time, Britain was closer to the equator and existed as a series of smaller separate islands. Dearc lived alongside a menagerie of plant-eating and meat-eating dinosaurs, early mammals and marine reptiles.

Dearc was discovered in 2017, with the fossil jutting out from a limestone intertidal zone after the tide had gone down.

“We were gobsmacked,” Brusatte said. “Nothing like this had ever been found in Scotland.”

They battled the tide, first using hammers and chisels and then diamond-tipped saws. But the tide interrupted before the skeleton could be fully extracted.

“The tide came in with a vengeance, and we cried as the waves lapped over the fossil,” Brusatte said. “We thought we lost it. But we decided to come back around midnight when the tide was down again, using our headlamps and flashlights. We were shocked and relieved to see the bones still there as the waves receded.”

(Reporting by Will Dunham in Washington, Editing by Rosalba O’Brien).