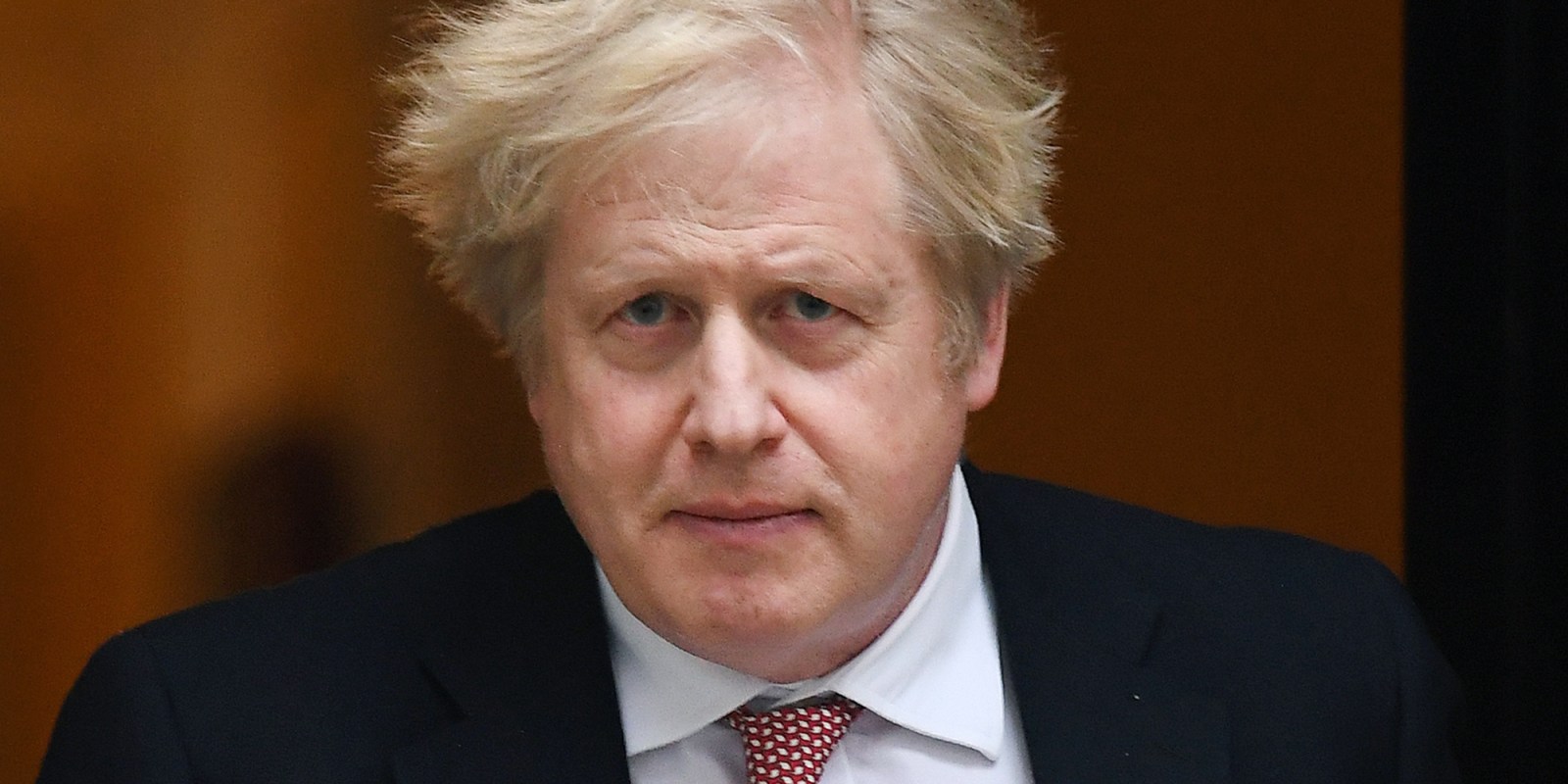 British Prime Minister Boris Johnson has announced his government’s ‘Living with Covid’ strategy, which will bring an end to all Covid-19 restrictions in England. (Photo: EPA-EFE / Ancy Rain)

UK Prime Minister Boris Johnson confirmed that England will scrap Covid-19 rules, including the requirement to self-isolate after a positive test, while his government authorised another vaccine booster shot for the most vulnerable people. Canadian Prime Minister Justin Trudeau extended a State of Emergency sparked by protesters against vaccine mandates.

Hong Kong is considering stricter physical-distancing steps to curtail its escalating outbreak. Departures have climbed to the highest during the pandemic as residents flee the measures.

The first double-vaccinated visitors arrived in newly reopened Australia, which is hoping for a recovery in tourism. New Zealand’s prime minister will start to ease restrictions after the current Omicron outbreak has peaked. 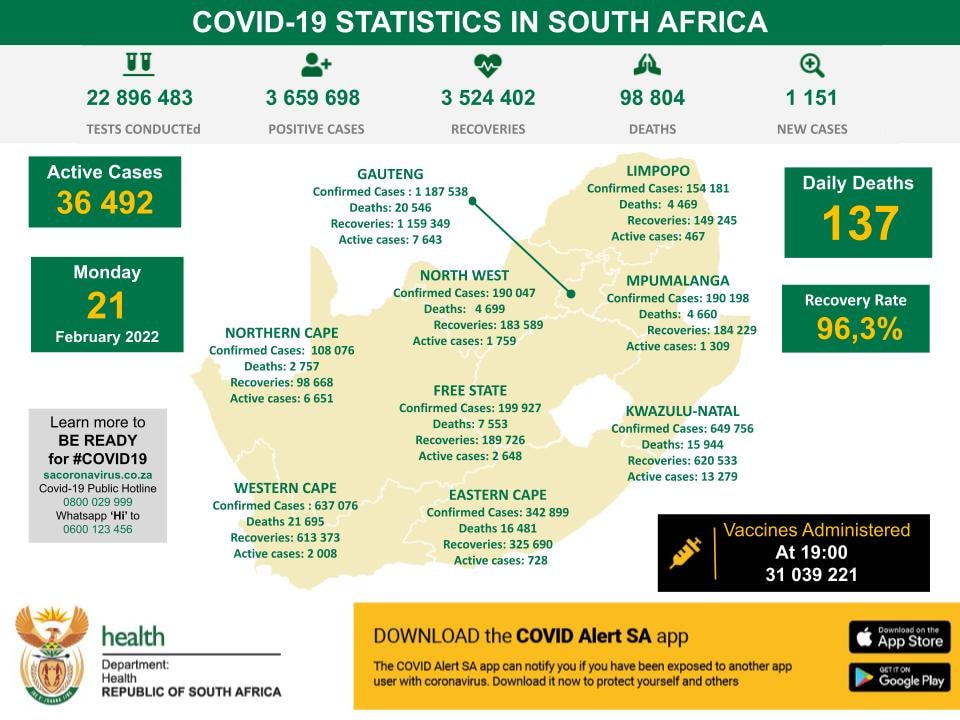 Canadian Prime Minister Justin Trudeau said his government will retain emergency powers for at least a few more days because of ongoing threats, even after police cleared all blockades across the country.

Trudeau said at a press conference that it was still too early to lift measures banning public assembly in downtown Ottawa and at border crossings, because of concern demonstrators opposing vaccine mandates are prepared to continue protests.

The emergency legislation was expected to be approved by lawmakers later on Monday with the backing of Trudeau’s governing Liberal Party and the left-leaning New Democratic Party. Trudeau hinted he would call elections if he lost the vote.

From Thursday, people who have the virus will no longer be legally required to self-isolate, though they will still be advised to stay at home, Johnson said in the House of Commons on Monday. From 1 April, the universal and free availability of coronavirus testing will end, he said.

Johnson’s announcement of a “Living with Covid” plan comes against a backdrop of declining daily infections, hospitalisations and deaths relating to the disease, though critics say he is moving too fast.

Britain’s most vulnerable people will be offered another Covid-19 booster shot this spring to bolster their protection as the country prepares to abandon all pandemic restrictions.

The shot will be offered to adults aged 75 and older, care-home residents, and those over 12 who are immunosuppressed and at much higher risk of severe Covid, UK Health Secretary Sajid Javid said. The booster is advised for about six months after a previous dose and is seen as a bridge before another — potentially broader — booster campaign this autumn.

Bulgaria, the EU country with the highest Covid death rate per 100,000 people, will gradually lift restrictions from 24 February for access to public events and group activities as hospitalisations decline, the country’s chief health inspector said. Requirement of proof of vaccination or past Covid illness will be lifted for customers visiting bars and clubs.

The Balkan country has the bloc’s lowest vaccination rate, at just 29%, driven by institutional distrust and doubts about the safety of the shots. While hospitalisations are decreasing, weekly death numbers are still rising.

France steps back from J&J vaccine

France’s health authority has recommended holding off on using Johnson & Johnson’s one-shot Covid-19 vaccine, except for individuals who are allergic to mRNA vaccines. The recommendation followed a study showing a potentially heightened risk of myocardial infarction during the two weeks following administration of the J&J vaccine.

Growth in Germany and France, Europe’s two biggest economies, picked up sharply in February as the region moved past the peak of the latest wave of coronavirus infections.

Across the euro area, there was an unexpectedly strong rebound in economic activity, according to surveys by IHS Markit. In the UK, the travel, leisure and entertainment industries roared back to life more quickly than expected.

While Europe has endured some of the worst Covid-19 infection rates, looser curbs in recent weeks boosted consumer demand.

Hong Kong banned Singapore Airlines’ budget carrier Scoot from flying to the city for two weeks after passengers tested positive for Covid on arrival, severing one of the last air links between the Asian financial hubs. KLM Royal Dutch Airlines’ services from Amsterdam are also halted until 6 March, Hong Kong’s Department of Health said in a statement.

The city reported 7,533 new infections on Monday and is now considering stricter physical-distancing measures to counter strain on its health infrastructure that is testing its zero-tolerance approach to the virus.

The city is delaying plans to reopen gyms and beauty parlours on 24 February, Sing Tao reported, citing people it didn’t identify. No decision had been made on hair salons, while some restrictions may remain on restaurants, it said.

Hong Kong recorded 27,703 departures from the city in the week ended 20 February, the highest level since the pandemic began, according to government data.

A US business group in Japan welcomed the country’s limited opening of its borders to new foreign entrants while urging that the cap on numbers be raised and “nightmare” bureaucratic processes streamlined.

Christopher LaFleur, the special adviser to the American Chamber of Commerce in Japan, told Bloomberg TV on Monday that phased plans starting next week would be closely watched by the business community.

Tokyo reported 8,805 new cases on Monday, with the figure falling below 10,000 for the first time since 24 January.

New Zealand foresees Omicron peak in up to six weeks

New Zealand Prime Minister Jacinda Ardern said she will start to ease Covid-19 restrictions after the current Omicron outbreak has peaked, including the removal of some vaccine mandates animating protesters occupying Parliament’s grounds.

The government expects the current Omicron wave to peak in three to six weeks, Ardern told a news conference in Wellington. “At that point, if we follow the pattern of other countries, we’ll likely see a rapid decline, followed by cases stabilising at a lower level,” she said. “That is the point when we can start to do things differently.”

British banker Roger Smyth was among the first passengers to arrive in Australia as it reopened to double-vaccinated visitors after almost two years of strict travel bans.

Australia’s tourism sector employed about 5% of the nation’s workforce and contributed 3% to the economy before the pandemic. DM/MC

— With assistance from Anuchit Nguyen, Dong Lyu and Jeff Sutherland.