Summerfield Dynamos and coach Clinton Larsen are on the... 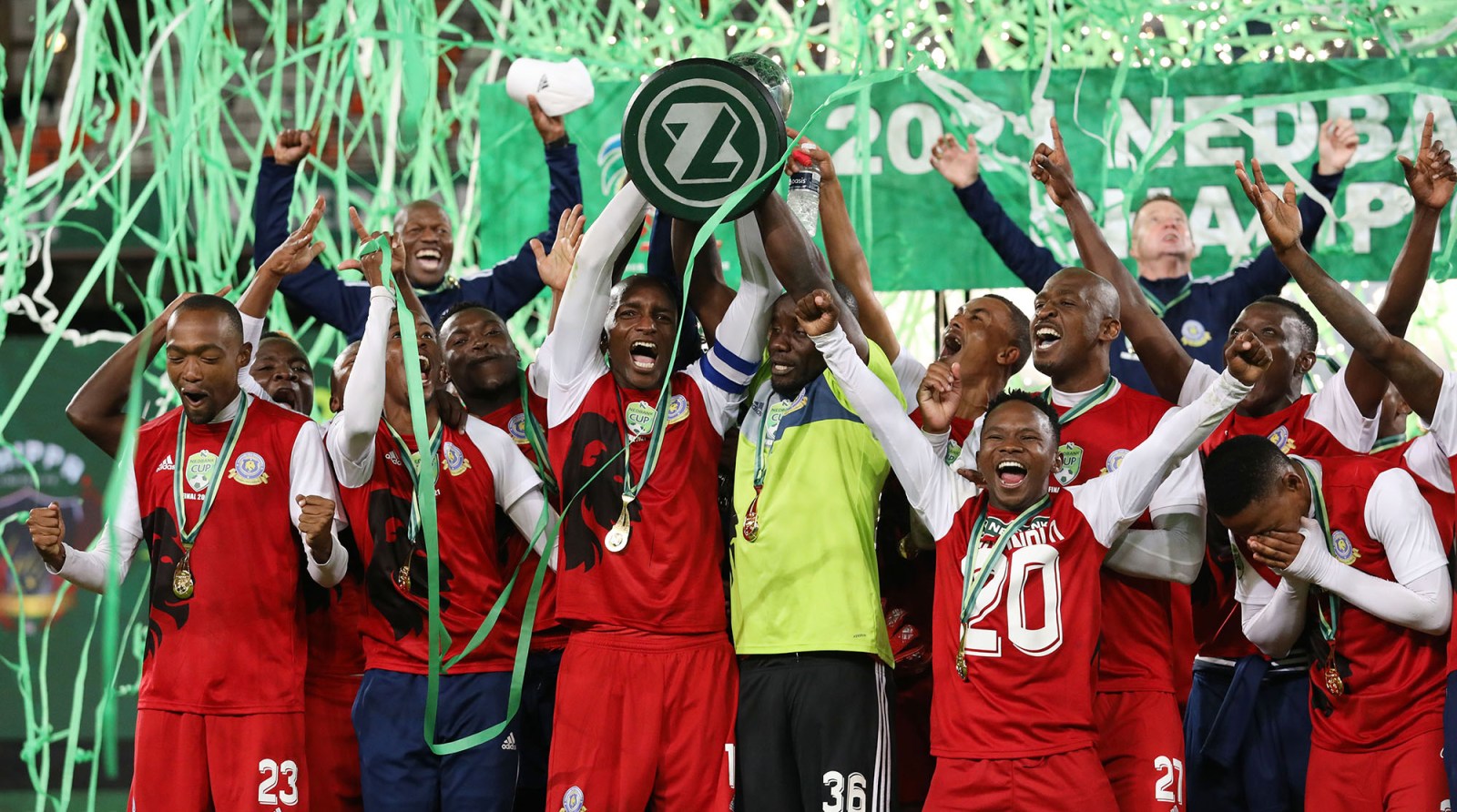 Tshakhuma FC lifts the trophy after the 2021 Nedbank Cup final match between Tshakhuma FC and Chippa United at the Free State Stadium in Bloemfontein on 8 May 2021. (Photo: Muzi Ntombela / BackpagePix)

The dynamic Durban-based Summerfield Dynamos, coached by former Golden Arrows mentor Clinton Larsen, are one of the lower-ranked teams making a name for themselves in this season’s Nedbank Cup.

The Nedbank Cup, much like its English counterpart the FA Cup, is an opportunity for teams in the lower divisions to showcase themselves and also earn an extra income by progressing as far as they can in the competition.

It’s also a platform for players in those lower-ranked teams – who don’t enjoy the benefit of displaying their skills on national television week in, week out – to sell themselves to top-flight clubs.

One such success story is that of Mamelodi Sundowns midfield maestro Andile Jali. The former Orlando Pirates star was snapped up by the Buccaneers after he and his University of Pretoria teammates had defied the odds and played themselves all the way into the final of the 2008/2009 edition of the Nedbank Cup, despite being a GladAfrica Championship side.

They were eventually felled by Swallows at the final hurdle. In the aftermath of that final disappointment, Jali and a number of his teammates who had impressed joined Premiership teams.

Teams from the third tier of South African football, the ABC Motsepe League, have also made their names by slaying their more high-profile counterparts in the Nedbank Cup over the years.

One of the biggest “cupsets” in the competition came when a full-strength Pirates, off winning a treble in the previous season, were trounced 4-1 and bundled out by third-tier side Maluti FET College in 2013.

Though this win by Maluti remains one of the most famous, or infamous depending on your allegiance to Pirates, such results are becoming more and more commonplace. This is because the gap between the so-called amateur sides and the professional ones has gradually narrowed.

To further emphasise this point, for the first time in the competition’s history there are four ABC Motsepe League teams in the round of 16. Summerfield Dynamos, Sinenkani, Mathaithai and Black Eagles all impressed in the opening round and will be aiming once again to defy the odds by reaching the quarterfinals.

One of the teams is guaranteed to progress to the last eight, with KwaZulu-Natal’s Summerfield and North West-based Eagles pitted against each other for the round of 16.

Durban-based Summerfield is coached by former Golden Arrows, Bloemfontein Celtic and Chippa United coach Clinton Larsen. Speaking to DM168 on his team’s progression to the last 16, the experienced mentor said:

“I’m happy we’ve gone through to the round of 16. Because getting to the round of 32 we had to play six qualifying games. It was a long journey, with away games in Newcastle, KZN, and all over the place. Eventually we secured a last-32 place, which was the first time in the club’s history that they had achieved that. So, everyone was already happy about that achievement. Going to the round of 16 is [an] even bigger achievement.”

Summerfield was established in 1988. Following in the footsteps of former Premiership champions Manning Rangers, who hail from the same area, the club only entered the Motsepe League in the 2017/2018 season. A year later they reached the national playoffs after being crowned KwaZulu-Natal champions.

The experienced Larsen says it was the ambition of the club and its owner, Collin Naidoo, which sold him on the project being put together at Summerfield, despite what were likely more enticing offers from teams in the second-tier Championship.

In June 2021 the former Rangers midfielder penned a three-year deal with Summerfield and harbours the dream of leading them to Championship promotion.

“I was approached by the chairman of the club. At that time, I also had two NFD (national first division) offers. So, it wasn’t an easy decision to make.

“What was important for me was being involved in a project that I knew had a long-term plan,” the 51-year-old said.

“After sitting down with the chairman of the club I realised he had an ambition to, firstly, promote the team to the NFD. Because this team has been to the [ABC

Motsepe] national playoffs – in 2019. They were unsuccessful. But the club has got a taste of winning the league in KZN. We wanted to try and do that again.”

A memorable season, so far

So far Larsen and his technical team are on the right track and lead Stream A in KZN, with just a few matches left to play in the 10-team mini-league. From their 16 games to date, Dynamos have won 11, drawn three and lost just two. It’s already a vast improvement compared with the season before he joined, when the Durbanites finished fifth in their stream.

The Durban-born coach made more than 200 appearances as a player for the now defunct Rangers and was part of the side’s Premiership winning team – under the tutelage of former Bafana Bafana coach Gordon Igesund. Larsen says those fond memories were also an influential factor in him taking the Summerfield job almost a year ago.

“The fact that it’s a team from Chatsworth… I’ve got a strong bond with the Chatsworth community because of my years at Manning Rangers. The team also plays at Chatsworth Stadium, which was the home ground of Manning Rangers. So, all these things put together brought back some fond memories. I just felt it was the place for me,” Larsen shared with DM168.

Speaking on the team’s great performances since he took over, Larsen said it was down to having enough time to prepare before the season started, and that they are currently reaping the rewards of sufficient preparation.

“It comes down to preparation. Fortunately, I started quite early and had a full pre-season with the team. And I was allowed to also bring different players in… A few experienced players,” stated the coach.

“The players had to adopt a whole new way of training, a whole new way of playing – which is different from the previous coaches of the club. That took time. So, I’m glad I had the pre-season to get the players to understand what I’m about, and for me to understand who they are. That was key for us starting the season well, and getting the right balance of the team.”

Summerfield will continue their magical Nedbank Cup run on 26 February, when they take on Eagles in the last 16. Though Larsen admitted to not knowing much about their next opponents, he said his team would be ready.

“Like we did against [our previous opponent] Uthongathi, we will focus on ourselves, focus on what we’re good at, and focus on making sure we get our players to execute our game plan to the best of their ability. Hopefully that’s good enough to go through.” DM168