STRIKE AT THE ROUTES

Sabotage, taxi disputes, ‘mafias’: Durban’s R22bn bus plan lurches from one crisis to the next 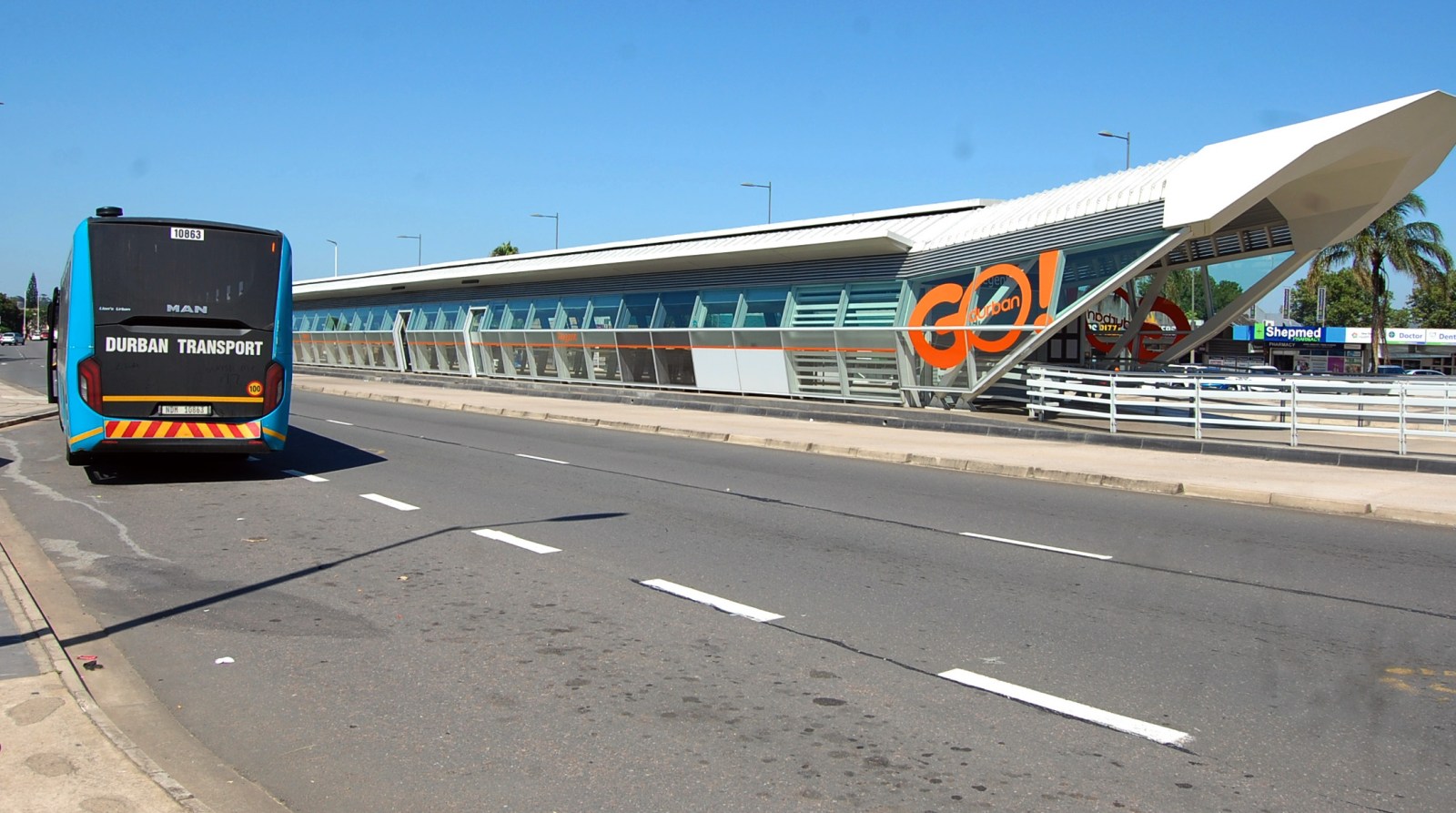 Announced in 2013, eThekwini’s bus rapid transit system has made little ground, with the first route still to be completed. It’s been stalled by opposition from the taxi industry, corruption claims and sabotage.

Despite billions of rands spent, the eThekwini Municipality’s bus rapid transit system (BRT) – known as Go!Durban – is in disarray. The project has faced endless delays and is far from seeing the light of day.

The project was announced in 2013 with much fanfare and a bill of R22-billion that would come from National Treasury. It was promoted as a panacea for the city’s perennial public transport problems, ferrying more than 600,000 commuters from one part of the municipality to another.

Work on the project has moved from one crisis to another, ranging from sabotage by local communities looking for job and economic opportunities, to sabotage from construction “mafias” as well as long-running disputes with taxi associations that are demanding compensation for lost routes, threatening that the project will not be allowed to continue if it is not forthcoming.

Another bone of contention is who will run the project once it’s completed. The City has said it will be managed by a consortium, with the City and the taxi industry as co-owners.

There have also been allegations of corruption in the awarding of contracts for the project. The eThekwini Municipality has denied these allegations. It says it is determined to complete the project, even if it is years later than initially planned.

Other major cities in South Africa have had their BRT systems running for years. The City of Johannesburg’s Rea Vaya started operating in August 2009; Cape Town’s MyCiTi has been running since May 2011; Pretoria’s Areyeng opened in December 2014 and George’s Go George BRT system opened in August 2015.

Other major cities in Africa also have BRT systems running smoothly. Lagos BRT, in the Nigerian capital, opened in March 2008, and Tanzania’s UDART, in the capital Dar es Salaam, has been running since May 2016.

By 2019, more than R3-billion had already been spent on building Go!Durban infrastructure. Over and above that, the eThekwini Municipality spent R325-million to acquire a fleet of new buses.

These buses have been gathering dust as some of the infrastructure built for the project, such as bus stations, has been destroyed or become “dens” for criminals, despite security personnel employed to secure them.

Corridor 3 – the first of three projects – is still incomplete. It is a 27.5km route between Pinetown and Bridge City Mall in KwaMashu township. The 27.5km has cost more than R116-million. A contract extension for R205-million was approved by the eThekwini Municipality council in December 2021, despite an outcry from critics and opposition parties.

Sipho Sindane, a leader of Inanda Taxi Association, said it was not opposed to the BRT system in its areas of operation because it would make the lives of commuters easier. He said the problem started when municipal officials promised financial compensation to the taxi industry.

“They should not have promised the money. They could easily have started building their routes and started negotiating with the taxi associations that would be affected. They told the meeting with the taxi industry that they will hand out sums of money. Now people [taxi owners] are saying they would not allow Go!Durban to go ahead until they get the funds that they were promised,” he said.

The South African Taxi Council KZN said it was still negotiating with the eThekwini Municipality on how the project would pan out.

Opposition parties accuse the ANC of mismanaging the project from the beginning. Nicole Graham, DA leader in the municipality and the member of eThekwini Executive Committee (Exco), said the people of eThekwini were suffering because of the mismanagement of the project.

She said that in the 2019/20 financial year, R300-million in transport grant funding had been returned to National Treasury because the municipality had failed to spend it properly in the allocated period.

“Despite huge costs being incurred and significant grant funding from the national government, it [Go!Durban] is years behind where it should be. The deadlines are repeatedly moved. Work stoppages, sabotage and disruptions, poor planning and bad management have all played a role.

“I am not optimistic that Go!Durban will ever materialise into the transformative, dynamic system that it was intended to be. It has been crushed by bad politics and bad management,” Graham said.

“A lot of the infrastructure has been damaged and destroyed or has aged badly despite never having been used or opened. In any functional democracy, the head of the eThekwini Transport Authority (ETA) would have been sent packing long ago.”

Mdu Nkosi, IFP chief whip and Exco member, said they viewed the project as one of those where the ANC spent money to benefit cadres and other connected business people, with no benefit for the people of eThekwini.

“We don’t see light at the end of the tunnel. We warned the ANC that they should have done proper consultations from the beginning. They said proper consultation [had] been done and everything [would] be fine. Now we are finding ourselves in this mess.

“The municipality officials must humble themselves and go down to the taxi operators and speak with them. Otherwise this project will become a white elephant that will not be used. Already we hear that some of the bus stations have now become places where vagrants sleep,” he said.

Municipality spokesperson Msawakhe Mayisela said that despite countless delays the City was hopeful that the project would be completed soon.

“The City is grateful [for] the strides it has made so far with this project that will revolutionise public transport in eThekwini. We will communicate our launch in due course. It should be noted that this is a huge project that requires all stakeholders to read from the same hymn book.

“The R22-billion budget is an estimated forecasted allocation for the project, spanning over a 10-year period. It is not the money that has [already] been received by the City’s ETA from the national grant for the programme implementation,” he said.

“The funding allocation for this project is allocated annually over the medium-term expenditure framework and the budget allocation being disbursed annually in line with the Division of Revenue Act.”

Mayisela added that the City was negotiating with stakeholders, including taxi owners.

“There are a few issues that caused deadlock at the negotiations, which are chaired by the independent facilitator. The City is busy looking at those issues with an intention to restrategise and get a mandate and negotiating position from the new council so that these issues and position are retabled back at the negotiations for the matters to be deliberated and agreement reached to enable the Go!Durban [to go] live and the launch of the C3 service.” DM168