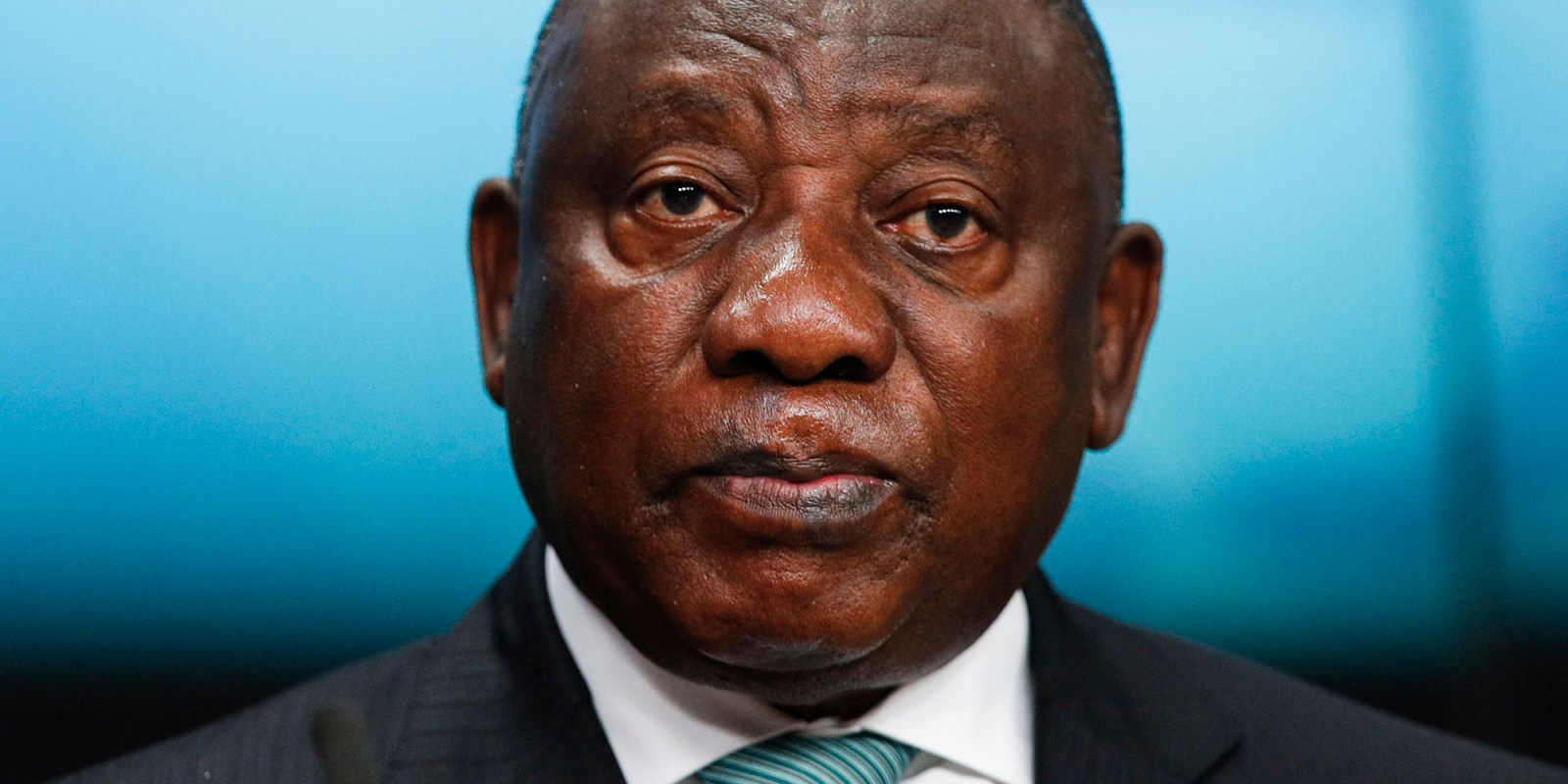 European promises of investments and Covid-19 donations rang hollow to African leaders who had hoped for a concession on vaccine manufacturing at the sixth African Union-European Union summit in Brussels.

President Cyril Ramaphosa, as AU champion on Covid-19, spearheaded the push for European countries to support a waiver of the Trade-Related Aspects of Intellectual Property Rights (TRIPS) and drilled into what he conceded was “an uncomfortable point”.

He even went as far as suggesting that the meeting teetered on the brink of failure due to the EU’s refusal to budge. Without the waiver, Africa would still be getting “crumbs from the table” of the West, he said. In Europe, some citizens are already receiving their third Covid-19 vaccine shot, while 80% of Africans have yet to receive anything.

Ramaphosa told journalists afterwards that if the EU wasn’t willing to budge from its position of refusing a TRIPS waiver “it will mean that we have not really been able to find each other on a matter of life and death”.

He made it clear that he thought that by heeding the pressure by pharmaceutical companies, who argue that the money they make from their intellectual property is needed for further research, European leaders were putting profits over lives.

This was echoed in his speech at the launch of six vaccine technology transfer hubs on Friday, 18 February, as well as during the closing session of the summit hours after, where he told the European and African heads of government that if a solution wasn’t found “then some of us would walk away from here feeling that this summit has failed”.

In the end, it was agreed that the AU Commission and the European Commission would meet on this and instruct negotiators at the World Trade Organisation to find a compromise on the issue. At the summit’s closing on 18 February, European Commission President Ursula von der Leyen said there should be “a meeting between our two delegations in spring” (the end of winter is approaching in the northern hemisphere).

“Why don’t we put ourselves the tasks, Moussa, that we have to be done with a good compromise when we meet in spring with Ngozi? With this, we have a structure to work on and a deadline to deliver. I don’t think we will do this on [this] Friday afternoon, but we need to take time.”

She said they had to find “a new way of working together” on the issue “so that we can deliver transformative results on the ground”.

On Friday morning, the final session of the heads of state summit saw an announcement of vaccine manufacturing and technology transfer hubs in six African countries — South Africa (already established), Kenya, Tunisia, Egypt, Nigeria and Senegal. Ramaphosa explained that “full operationalisation” of the hub was “hampered by intellectual property barriers” and this could become an issue in the five other countries as well. Issues related to these barriers also make it difficult to export the vaccine to other low- and middle-income countries in need, he said.

He also urged that there should be a market for the vaccines produced in African countries and that the Covax initiative should procure the vaccines it distributes to low-income countries, locally. “This will enhance the spirit of Africa’s determination to ensure biotech sovereignty,” Ramaphosa said. “We cannot continue being consumers of medical countermeasures for diseases produced at high prices that are not affordable to the continent.”

A TRIPS waiver will ensure “freedom to operate” in this regard.

French President Emmanuel Macron, whose government holds the six-month presidency of the Council of the European Union, said, however, “it is not intellectual property [rights] that is preventing production, it is technology transfer”.

Macron, who stood with arms folded and turned towards his lectern and not towards Ramaphosa as the latter made his case for a waiver, said France would be contributing €20-million to the tech transfer hubs in what is “an unprecedented opportunity for cooperation between Europe and Africa”.

Macron also pointed out that many European countries don’t even have the vaccine manufacturing technology that is being transferred to these six African countries. He said countries on the two continents have been working together on Covid-19 prevention since “the spring of 2020” (shortly after the pandemic began) and had done more for Africa in terms of cooperation on healthcare systems and the donation of medical supplies “than any other power”.

Ramaphosa believes there is hope. On the sidelines of the summit, he had “a wonderful meeting” with German Chancellor Olaf Scholz “and we had a good exchange on the issue of the IP waiver”, he told journalists.

Germany’s opposition to the waiver, which has received support from more than 100 countries since being spearheaded by India and South Africa at the WTO, carries outsized weight due to the influence the country has in the European Commission.

The German government has expressed concerns that a waiver would negatively affect future investments in biotech companies, including smaller, high-risk companies like BioNTech, which developed one of the successful messenger RNA Covid-19 vaccines.

Ramaphosa said he told Scholz that the intellectual property for the manufacture of Covid-19 vaccines “should not be seen as a profiteering type of instrument or product, it should be what should be readily available”.

He said it appeared that the message got through to Scholz, who took over from long-serving chancellor Angela Merkel in December.

“He started arguing that, you know, even the originators don’t necessarily want to make money out of it,” Ramaphosa said. He argued that this waiver would apply for a limited period “so that we can get over this pandemic”. South Africa didn’t just want to “fill and finish” vaccines, which entails getting the drug substance from somewhere else and getting the product market-ready in packaging. “We want to manufacture the drug substance ourselves, and that is where the real heart of the IP argument comes in,” he said.

In their meeting, the two leaders proposed the “two-process negotiation” that was announced by Von der Leyen. Much was made at the summit about strengthening the partnership between the two continents, which leaders want to be one of equals, but Ramaphosa said he considered the TRIPS waiver to be a dealbreaker in this regard.

Perhaps the separate red carpets for leaders of the different continents, who entered the Justus Lipsius building which hosted the summit through separate entrances (possibly for security or Covid-19 concerns — the reasons were unclear) should have been a sign.

Ramaphosa didn’t quite seem to believe the continents were talking as equal partners — as yet. He also expressed doubt over where the €150-billion the EU promised to leverage in funding, investments and loans for development in Africa as part of its Global Gateway initiative would come from, and whether the promises would, as in the past, be broken.

“We look at this with a degree of wanting to see whether it will really be done, because we still remember what was not done in the past,” he said.

At the closing press conference, Devex journalist Vince Chadwick pointed out to EU leaders that, at the fifth AU-EU summit in Abidjan in 2017, they planned to “mobilise €44-billion by 2020” for Africa, but there was no proof of this money being “mobilised”. He also said nobody in the building could tell him where the EU planned to get the €150-billion which it promised to leverage at this summit. He was assured by Macron that this time there would be six-monthly reports about progress.

On the promises that emanated from the summit, and asked to comment on the EU rivalry with China, Ramaphosa said if the EU was helping African countries, it should “not be on terms that are going to take us back to colonialism”.

“We will say the strings that need to be attached [to an EU partnership] must not be strings that take us back to the colonial past.”

Throughout the summit, however, what it was that Africa was offering to Europe wasn’t made quite as explicit as the other way around, except during talks about Africa’s young population that needed education and skills to find reasons not to migrate to Europe.

The proof of the pudding, “as they say in the classics”, is in the tasting, Ramaphosa said. DM