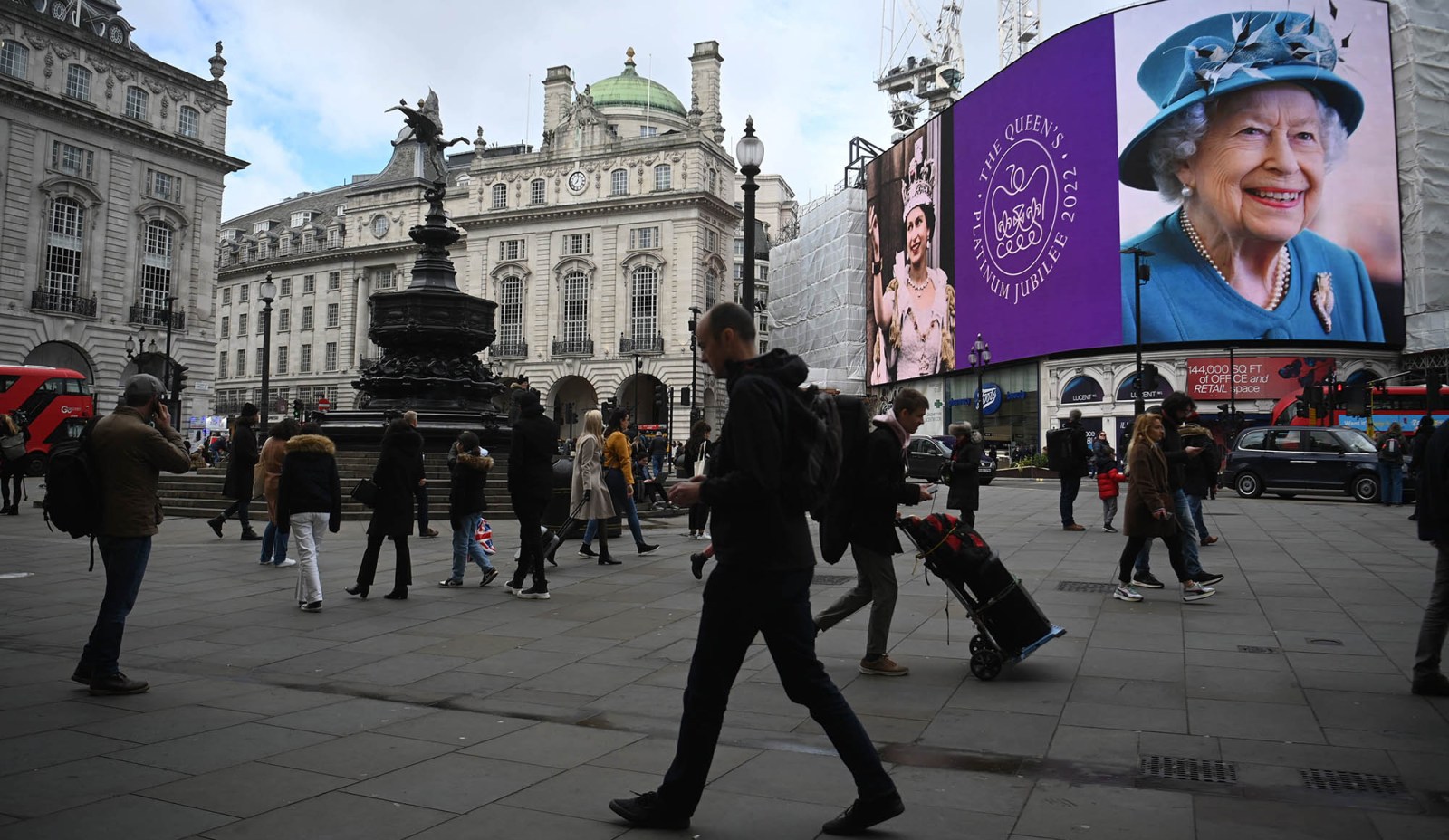 An image of Britain's Queen Elizabeth II is displayed on screen at Piccadilly Circus in London, Britain, on 6 February 2022. (Photo: EPA-EFE / NEIL HALL)

Queen Elizabeth II, the UK’s 95-year-old monarch, has tested positive for Covid-19, Buckingham Palace confirmed. The announcement came a day before UK Prime Minister Boris Johnson is due to lift remaining virus restrictions for England and put it on a path to “living with Covid.”

Canadian police continued clearing protesters from Ottawa’s streets and making arrests on Sunday as momentum appeared to shift in their favour and against the anti-vaccination blockade that has snarled the country’s capital for the past three weeks. 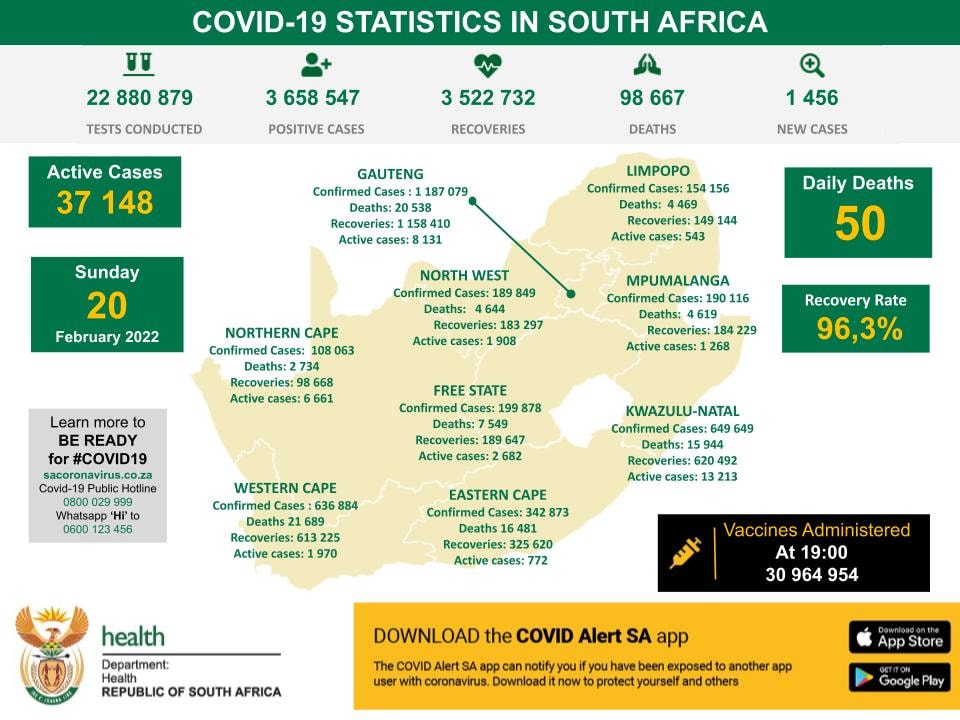 The decision, announced by Prime Minister Naftali Bennett, is one of a number of steps to ease coronavirus limitations that are being taken by the government as the number of new infections declines.

Canadian police continued clearing protesters from Ottawa’s streets and making arrests on Sunday as momentum appeared to shift in their favour and against the anti-vaccination blockade that has snarled the country’s capital for the past three weeks.

The number of arrests since the police operation began on Friday rose to 191, with 57 of the vehicles that have blocked traffic now towed away and more downtown arteries clear, the Ottawa Police Service said in a tweet on Sunday morning.

The police warned that the operation is still under way in downtown Ottawa and for residents to stay away.

Egypt to export locally made vaccine

Egypt is readying to export locally made Covid vaccines to African nations, looking to position itself as a hub for inoculations on the continent grappling with the virus.

Egyptian authorities are expected to discuss potential export plans with a Chinese delegation at the end of February, Heba Wali, president of the state-run Holding Company for Biological Products & Vaccines, or Vacsera, said on Sunday in an interview in Cairo.

The move comes as a government official said a batch of locally made Sinovac vaccines had been sent to the Palestinian Territories, in the first overseas shipment.

The current wave of infections, by far the most severe the city has faced during the pandemic, is testing Hong Kong’s zero-tolerance approach to the virus. Scenes of elderly patients lying on gurneys in the street because hospitals have no more space and frightened residents flooding emergency rooms have shocked residents, and drawn an unusually direct intervention from China’s President Xi Jinping.

Concerns about the queen contracting Covid heightened this month after her son and heir to the throne, Prince Charles, tested positive after having had contact with her.

Travellers from the US, the UK, Spain and Ireland and a dozen other countries won’t have to quarantine if they travel to Germany. The country’s public-health institute removed the nations from a list of high-risk countries as of Sunday.

UK Prime Minister Boris Johnson defended his plan to lift remaining Covid-19 restrictions in England from criticism by the medical community. While acknowledging that the virus remains dangerous, he said declining case numbers and hospitalisations justify easing the rules.

Johnson will announce on Monday that those testing positive will no longer be required to self-isolate and that the government also plans to wind down providing free tests. The prime minister told the BBC on Sunday that the British government can no longer afford to spend about £2-billion a month on the free testing.

The city recorded 6,067 new coronavirus cases on Sunday, 12 of them imported. Authorities will maintain physical-distancing measures and would consider tightening them if high numbers of infections persist, health department officials said at a press conference. The officials reported 14 deaths from the virus and said 10 people were in critical condition.

Slovenia will lift all virus restrictions in industry, trade, tourism and hospitality and other services as of Monday, the country’s state news agency reported on Saturday evening. The government will also extend the opening hours of restaurants and reopen nightclubs.

Prime Minister Boris Johnson’s government reiterated his intention to end the UK’s remaining Covid-19 restrictions, saying he would lay out a plan this week for “living with Covid”.

The prime minister is expected to confirm “all regulations that restrict public freedoms will be repealed”, according to a statement on Saturday. Johnson earlier this month said he plans to end the legal requirement for people in England to self-isolate if they test positive.

Police dislodged anti-vaccine protesters from the street in front of Canada’s parliament building, clearing the centre of a weeks-long blockade that paralysed the capital city’s downtown and plunged the nation into crisis.

By evening, a total of 170 people had been arrested as police intensified their actions, deploying pepper spray, batons and mounted units to remove demonstrators. But the police said their operation to break up the protests was not complete.

“This operation is still moving forward, it is not over, and it will take more time until we have achieved our goals,” Ottawa’s interim police chief, Steve Bell, said in a press conference Saturday afternoon. “We are in this until it is over.”

A Mexican court ruled that children aged five to 11 are to be allowed access to Covid-19 vaccinations, the Mexican newspaper Excelsior reported.

The decision by magistrates of an administrative court based in Mexico City calls for federal judges to admit orders allowing for the use of the vaccine for children, concluding that they are at risk because health authorities have refused to grant the benefit, the newspaper reported. DM/MC