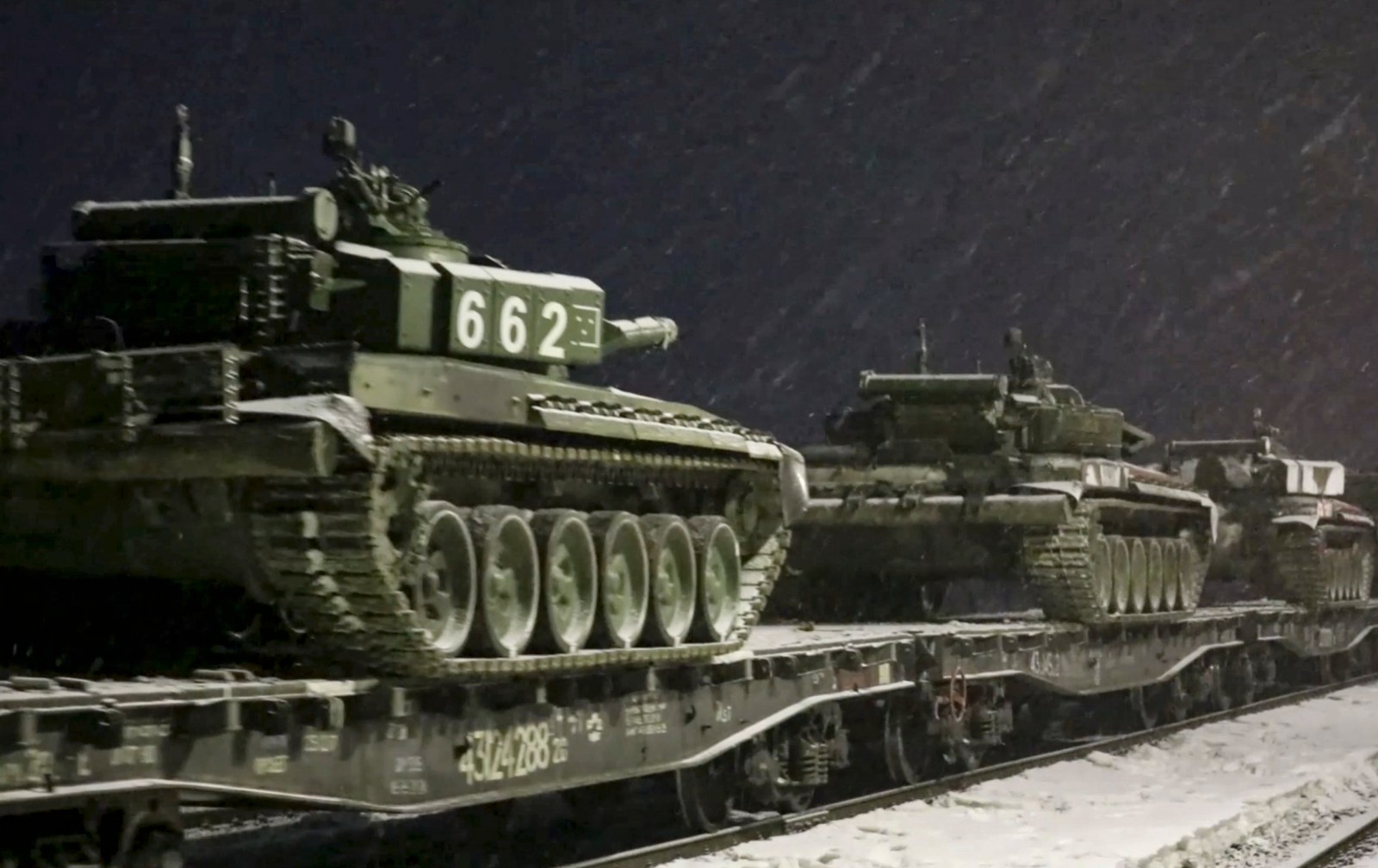 A handout still image taken from a handout video made available by the Russian Defence Ministry press service shows Russian tanks being transported by rail from a ground shooting range in Russia, 18 February 2022. Units of the Western and Southern military districts on February 15 began returning from exercises to their bases by rail and road, the Russian Defense Ministry official said. (Photo: EPA-EFE/RUSSIAN DEFENCE MINISTRY PRESS)

WARSAW, Feb 18 (Reuters) - U.S. Defense Secretary Lloyd Austin announced on Friday the planned sale of 250 Abrams tanks to Poland, as Washington moves to strengthen the defences of a key eastern European ally amid a mounting threat of war between neighboring Ukraine and Russia.

Austin was speaking during a trip to Warsaw, where Polish leaders have been alarmed by the deployment of thousands of Russian forces in neighbouring Belarus, part of a huge Russian buildup around Ukraine that NATO says positions Moscow for an invasion. President Vladimir Putin denies any plan to invade.

“If Russia further invades Ukraine, Poland could see tens of thousands of displaced Ukrainians and others flowing across its border, trying to save themselves and their families from the scourge of war.”

The sale of Abrams tanks to Poland, which is also home to a future U.S. missile defense site, is another sign of a deep and growing defence relationship with the United States. It follows the deployment of nearly 5,000 additional U.S. troops to Poland as well as additional fighter aircraft, as part of Washington’s response to the Ukraine crisis.

The Abrams battle tank carries a crew of four personnel and has a manually loaded cannon that can fire against enemy personnel armored vehicles and even low-flying aircraft, according to its manufacturer, General Dynamics GD.N.

“What Mr. Putin did not want was a stronger NATO on his flank, and that’s exactly what he has today,” Austin told a news conference.

“It will also strengthen our interoperability with the Polish armed forces, boosting the credibility of our combined deterrence efforts and those of our other NATO Allies.”

Kyiv and the rebels have blamed each other for escalating tensions after artillery and mortar attacks this week, prompting fears that Russia, which has massed more than 100,000 troops near Ukraine’s borders, could get involved. Read full story

For a second day, Austin dismissed Russian claims that it was withdrawing troops from the areas around Ukraine.

Poland is among the NATO members that are most hawkish in confronting what it sees as Russia’s revisionist ambitions in Eastern Europe.

Birthplace of the Solidarity trade union movement that played a key role in bringing down Communism in central Europe, Poland is particularly sensitive to what it sees as threats of Russian expansionism, and both conservative and liberal governments have been steadfast in their support for Kyiv.

“Poland knows first-hand the steep cost paid by victims of aggression from larger neighbors, and it has made valuable contributions to assist Ukraine in building up its defense capabilities,” Austin said, noting training exercises and its offer of ammunition and portable air defense weapons to Ukraine.

Washington is also finalising its deployment of an additional 4,700 troops from the 82nd Airborne Division, more than doubling the U.S. troop presence in Poland.

President Joe Biden has ruled out deploying U.S. forces to fight in Ukraine against Russia. But deployments like the ones to Poland could put U.S. and Russian troops in close proximity, which experts say is still a risk given that conflict can easily, and inadvertently, spill over borders.

Poland’s southeastern border is close to the western Ukrainian city of Lviv, where the United States relocated its embassy due to the mounting fears of a Russian invasion.

U.S. officials have said U.S. troops in Poland could help American citizens who may flee to the country if Russia invades as well as assist Warsaw with a possible influx of refugees. U.S. officials believe millions of Ukrainians may become refugees and internally displaced in a full-scale conflict.

Poland is already home to between one and two million Ukrainians.