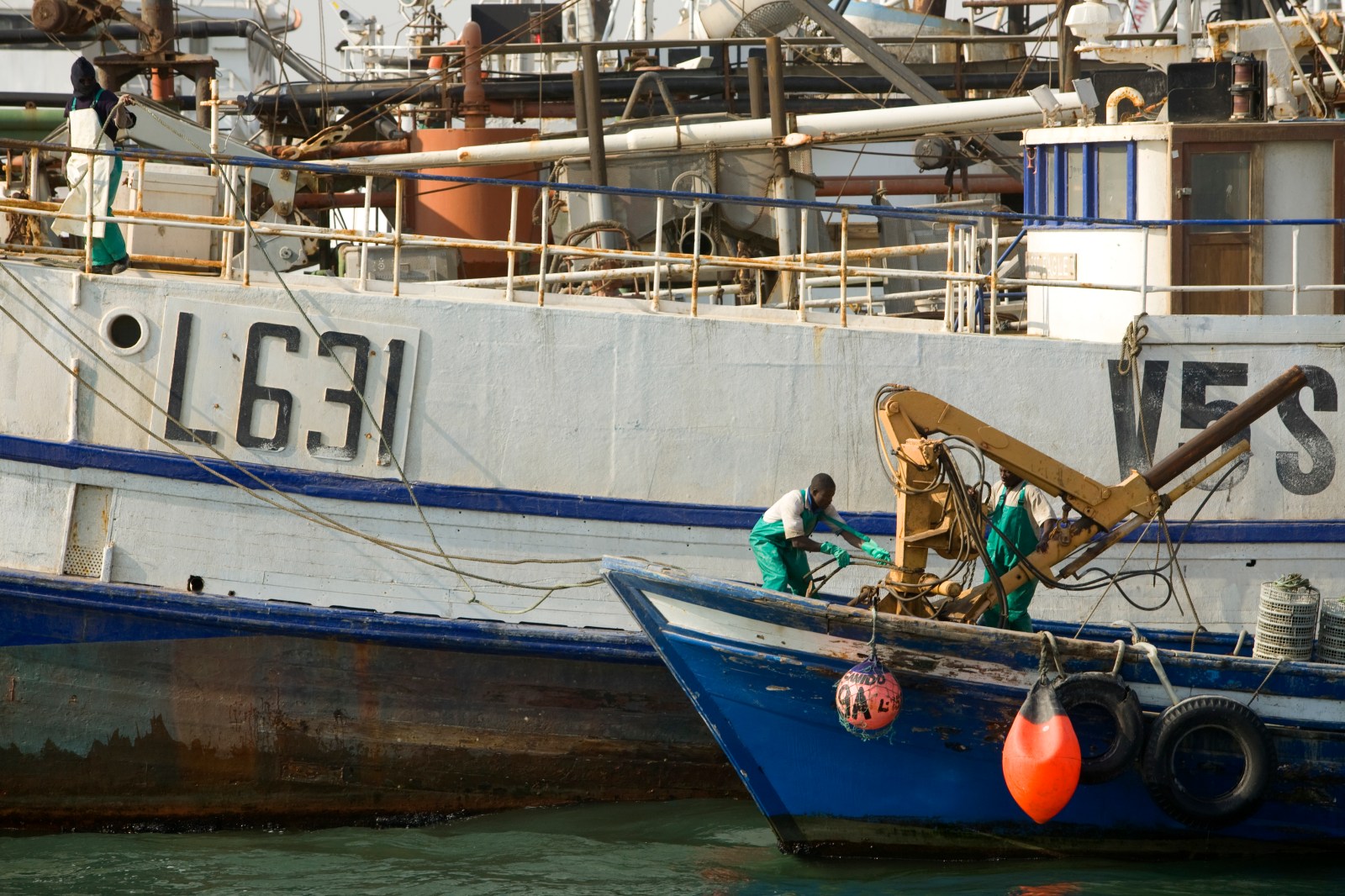 Walvis Bay on the Atlantic Ocean is the main port in Namibia and home to many fishing companies, fishing is one of the main contributors to the Namibian economy. A small fishing vessel docks at an adjacent quay. (Photo: John Hogg / World Bank)

The revelation of corruption in the fishing industry has rocked the ruling party — but has yet to sink it.

That prefigured the South African majority’s emancipation from that same government in 1994, which brought Swapo’s liberation movement ally, the African National Congress (ANC), to power.

Now Namibia is about to begin its biggest corruption trial — of the ‘Fishrot’ 10. It will inevitably be examined for possible precedents across the border in South Africa’s protracted State Capture saga. In both scandals, the allegations go right to the top.

So, will the big fish finally get their just deserts? Or will they be the ones that get away? And what impact will these major corruption scandals have on the two ruling parties’ grip on power?

The 10 former politicians, businessmen, and lawyers stand accused of bribery and corruption for siphoning off millions of dollars from Namibia’s fishing industry. Fishcor, Namibia’s state-owned fishing company, allegedly transferred fishing quotas from private Namibian companies to other local companies in which the politicians involved had interests.

These latter companies were affiliated to Iceland’s largest fishing corporation Samherji, which allegedly paid about $10-million in bribes to Swapo leaders for preferential access to Namibia’s rich fishing waters. Samherji allegedly also used other dodges to avoid paying taxes in Namibia by registering its operations in tax havens like Mauritius and Cyprus, investigative reporters found.

So just about everyone got a cut of the Fishrot pie. Except for ordinary Namibians.

Former fisheries minister Bernardt Esau, former justice minister Sakeus Shanghala, former Fishcor board chairman James Hatuikulipi, ex-Fishcor CEO Mike Nghipunya, and five other senior officials or business executives will stand trial after their current bail hearings. A 10th suspect, lawyer Marén de Klerk, has been charged but fled to South Africa from where Namibia is battling to extradite him. All have denied guilt.

They were netted through a WikiLeaks trove of more than 30,000 documents, including internal emails, provided by former Samherji employee-turned-whistleblower Johannes Stefansson.

Al-Jazeera conducted an investigation in 2019 in which its journalists posed as Chinese investors trying to win fishing quotas. Esau was filmed requesting a donation to Swapo’s coffers of $200,000 from the fake investors.

Esau and Shanghala resigned from the cabinet, and Hatuikulipi resigned as Fishcor chairman soon after the exposures. Samherji CEO Thorsteinn Mar Baldvinsson stepped aside in Iceland pending an independent investigation.

The whole Fishrot scandal surfaced just before Namibia’s general elections on 27 November 2019. On that day, the last of the accused was arrested. The timing inevitably led to accusations that the exposé had been manipulated to damage the ruling party — which it did. As Republikein news editor Ronelle Rademeyer told ISS Today, votes for President Hage Geingob plummeted from 87% in the 2014 elections to just over 56% in 2019, the lowest majority by any president since independence.

Swapo took a smaller cut of 14% down to 65.45%, losing its two-thirds majority in the National Assembly for the first time. Rademeyer notes that Swapo also lost its dominance in the 2020 local authority elections. “I think the Fishrot scandal definitely impacted on the decline in votes for Swapo, but there were also a number of other factors such as non-delivery on promises to uplift people from poverty, creating jobs, building houses, etc.”

Meanwhile, in South Africa, the ANC also took big hits in the 2019 general elections and the 2016 and 2021 local government polls after revelations of gross corruption and state capture during Jacob Zuma’s presidency. The country now waits to see if the Zondo Commission findings will lead to prosecutions of top politicians, officials and CEOs.

Back in Namibia, questions are still being asked about how far up the political hierarchy Fishrot extends and whether a bigger head — that of Geingob himself — will roll.

According to investigative paper The Namibian and the Organized Crime and Corruption Reporting Project (OCCRP) in December 2016, Shanghala, then attorney general, and Hatuikulipi, Fishcor chairperson, cooked up another scheme at Cape Town’s Waterfront. This was with Adriaan Louw, a Namibian businessman who owned a company called African Selection Fishing.

The exposé alleges that the men — who have all denied wrongdoing — set up several Swapo-controlled companies that received nearly $4.5-million skimmed from a $637-million fishing deal between Fishcor and African Selection Fishing. Some of this money was allegedly used in a campaign to buy votes for Geingob ahead of Swapo’s 2017 elective congress.

“Whoever was chosen was virtually guaranteed to win the election,” says the OCCRP/The Namibian report. “But with Namibia reeling from a devastating drought and an economic crisis that had sent youth unemployment soaring, Geingob, who had first been elected in 2014, was facing strong opposition within his own party.”

This late chapter in the Fishrot saga will also echo in the ears of South Africans. They will recall the vote-buying allegations surrounding the ANC’s 2017 elective conference, which will undoubtedly surface again at this year’s December conference.

In both countries, the real contest for power has been, and at least for now remains, within the ruling party.

Will these latest revelations topple Geingob? Gwen Lister, founder and former editor of The Namibian, thinks not. “Fishrot has definitely dented Swapo’s support base,” she told ISS Today. “Geingob is intact, though, till the end of his second term as Namibian president.”

And will the fishing industry change? In The Namibia Media Trust’s podcast Free Speak, Icelandic investigative journalist Helgi Seljan said Fishrot was a “classic case of state looting.” Samherji had paid as little as half of its fishing proceeds to the state and the rest to the crooked “sharks,” he said, leaving mere morsels for the masses.

Lister noted that the Namibian fishing industry had been restructured after independence to benefit the country’s population, especially the poor, which it did until the Fishrot crooks got hold of it. Seljan noted that in Iceland, the government had shaken up the fishing industry after Fishrot, introducing new measures to secure it from future corruption.

There are no signs of restructuring in Namibia, suggesting that, as The Namibian investigative journalist Shinovene Immanuel put it, the whole saga will probably be recycled in future. Another precedent for South Africa perhaps, as the ANC continues to deploy its cadres into the state-owned enterprises at the heart of state capture. DM