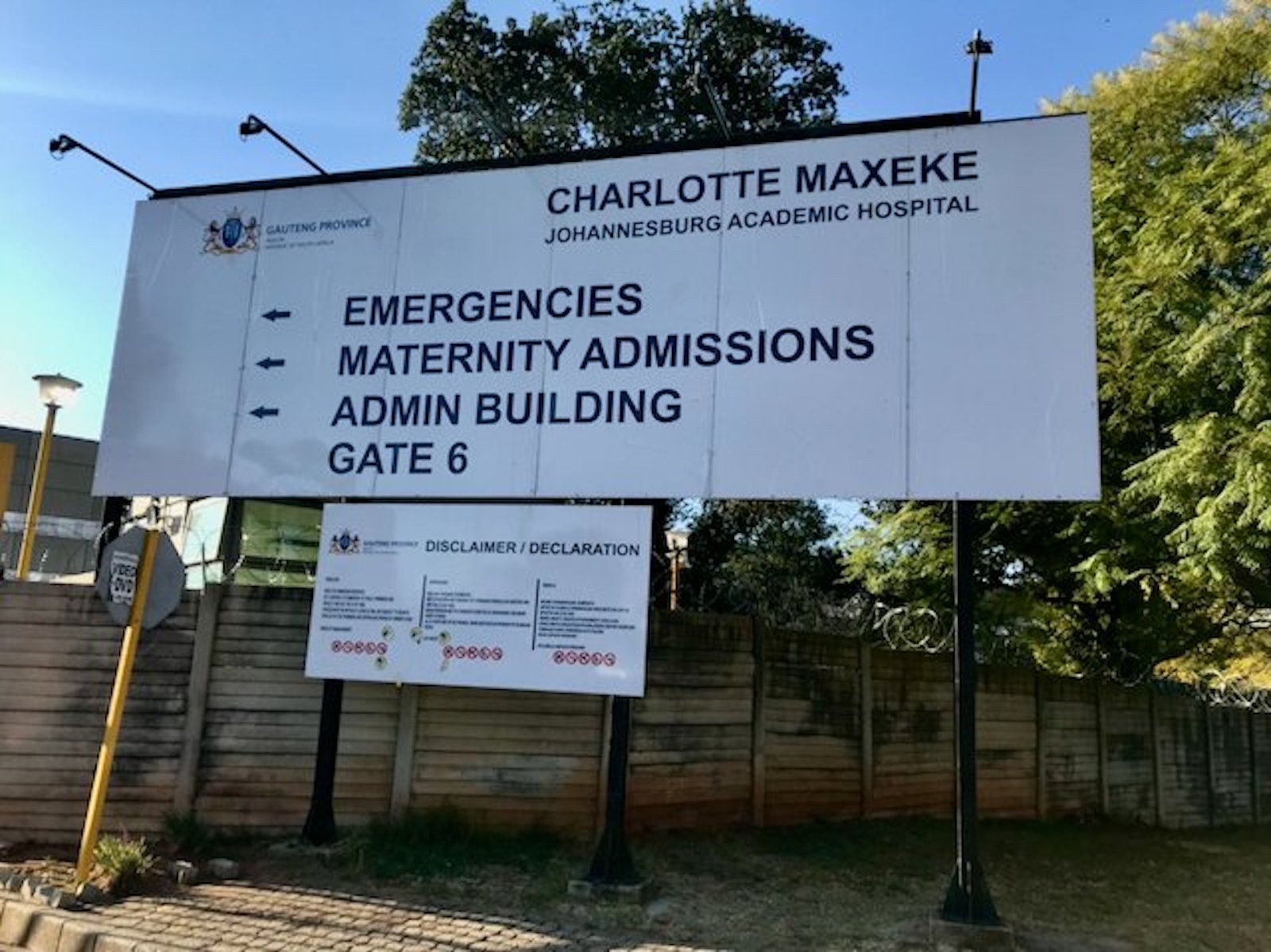 A fire at Charlotte Maxeke Hospital in April has resulted in its partial closure. This has placed severe strain on the Gauteng health system. (Archive photo: Masego Mafata)

The Gauteng health department has taken over the reconstruction of the hospital from the provincial Department of Infrastructure Development.

Health workers at Helen Joseph Hospital in Johannesburg say the increased patient load has placed severe strain on the hospital. The hospital is currently the only functioning tertiary emergency facility in central Johannesburg.

Charlotte Maxeke was forced to close on 16 April after a fire. The hospital opened partially in June, offering some medical and radiation oncology services, renal care, high-risk maternity care and an intensive care unit for Covid-19 patients. Patients requiring other services have been referred to hospitals in Charlotte Maxeke’s cluster, which includes Helen Joseph and Chris Hani Baragwanath hospitals.

GroundUp spoke to a few staff members at Helen Joseph Hospital. They asked to remain anonymous because they are not allowed to speak to the media.

“Yesterday there were about 145 patients waiting in our emergency department. Between 70 and 80 patients had been treated, processed through the system and were waiting for beds in wards. The waiting period for beds has increased from a couple of hours to days,” said one doctor.

The doctor said there’s been a minor increase in staff members to the emergency unit to help them cope with this load. There are about eight doctors treating more than 100 patients per shift, the doctor said.

The doctor said Helen Joseph has capacity for seven resuscitation patients, but they have had to treat up to 16 people in the resuscitation area, meaning patients have to share monitors.

“As far as we know, there have been no budget reallocations from Charlotte Maxeke to our hospital. We often run out of consumables like Jelco needles for drips and chest tubes,” the doctor said.

The doctor said while the allocation of some staff from Charlotte Maxeke to Helen Joseph was helpful, the hospital did not have enough beds and resources to treat the increased patient load.

The capacity at Helen Joseph is about 636 beds, while Charlotte Maxeke has almost 1,070. However, Charlotte Maxeke Hospital CEO Gladys Bogoshi said her hospital is currently operating at a capacity of about 650 beds.

Cleaning staff said it was also difficult for them to keep the area clean because of the cramped conditions in the emergency department. One cleaner said they are constantly having to clean urine from the floor, and shuffle between about 40 patients in an area that is only designed to hold eight patients.

Another doctor expressed concern about the lack of beds for patients requiring psychiatric care at Helen Joseph.

This has resulted in Helen Joseph’s emergency department treating between 35 and 50 patients at any given time. The doctor said the psychiatric ward at Helen Joseph has about 40 beds and is currently full.

“It is a safety concern to have acutely ill psychiatric patients in the emergency department where they can’t receive the appropriate care. Psychiatric wards are designed differently to other wards. People needing psychiatric care are ending up at a hospital that was never designed to cope with such high patient volumes,” said the doctor.

The staff members we spoke to said they are doing all they can to care for patients but the quality of their service is compromised. “We are in an environment where we cannot provide optimal care to patients who desperately need it,” said another doctor.

On Thursday, the Gauteng government announced at a media briefing at Charlotte Maxeke that the refurbishment at the hospital has been moved from the provincial Department of Infrastructure Development (DID) to the provincial health department.

Premier David Makhura came to this decision after noticing the “slow pace” of the reconstruction of the hospital late in 2021, said Thabo Masebe, acting provincial director-general.

Masebe said delays in refurbishing the hospital were caused by “disagreements between DID and the health department on the scope of the project and budget work done up to this point”.

Corruption allegations and the uncovering of serious irregularities by the Special Investigating Unit regarding DID’s awarding of contracts for AngloGold Ashanti Hospital on the West Rand have also contributed to delays in refurbishing the hospital, he said.

“This issue impacted on our capacity to deliver on the Charlotte Maxeke Hospital project in the shortest possible time,” said Masebe

In 2021, DID spokesperson Bongiwe Gambu told GroundUp that R8-million had been spent on the Radiation Oncology Unit and the total reconstruction cost of the hospital would be more than R60-million.

During the media briefing Bogoshi confirmed that in October 2021 the Solidarity Fund and FirstRand Limited’s SA Pandemic Intervention and Relief Effort Fund donated R68-million for the refurbishment of the hospital’s emergency department and other wards in the affected block.

“The first phase of the project will be completed at the end of February 2022 and the Accident and Emergency Section will be handed over to clinicians for resumption of services,” Masebe said.

To “fast-track” the refurbishments, the provincial government has requested the assistance of the national Health Department and the Development Bank of Southern Africa.

Ayanda Dakela, head of infrastructure at the national department, said he hoped that reconstruction would be completed by the end of 2023. DM