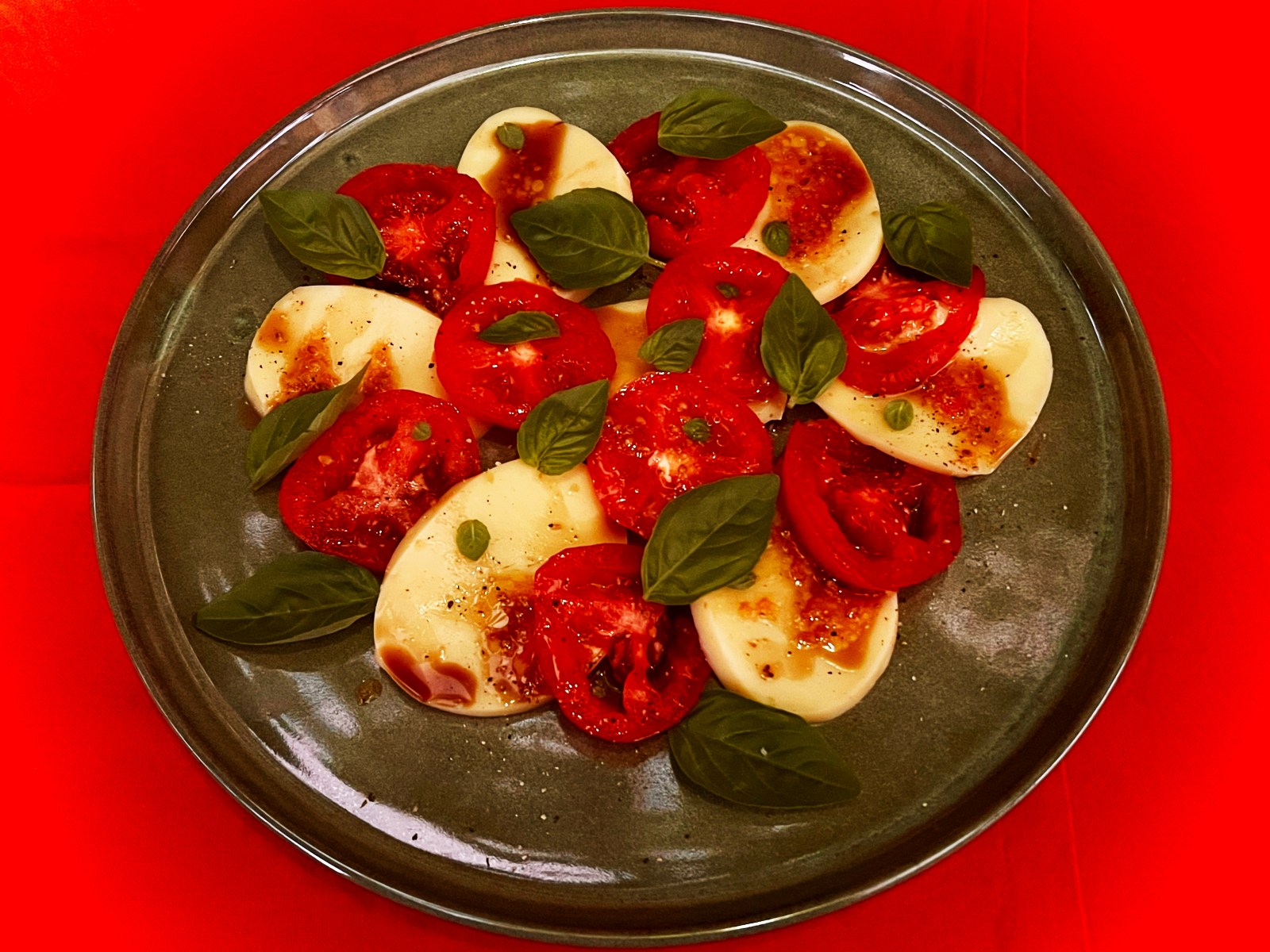 Red, white and green. The colours of the Italian flag and of every Italian’s passionate heart. And the colour of the classic Caprese Salad, which originates, as the name suggests, on the Isle of Capri. But beware: a terrible fate might befall you should you get it wrong.

Caprese: literally “of Capri”. The salad we call Caprese, or Insalata Caprese in Italian, originates on the Isle of Capri on the Tyrrhenian Sea where the Mediterranean meets the Bay of Naples, with its fabulous First World shopping, its yachting culture at Marina Grande where celebrities rub shoulders with tourists, and the world-famous dish whose name reminds us of its genesis. And where, once upon a time, a dish was served ostensibly to please a poet, futurist and co-author of the Fascist Manifesto, founded by Benito Mussollini, Il Duce himself.

Fitting, then, that just a glance at any Caprese salad brings to mind the country’s very flag, with its red for tomato, its green for fresh basil, and its white for mozzarella. It is thought to have been invented as a sandwich filling by an unnamed mason who, after the end of World War I hostilities in 1918, enclosed tomato, basil and mozzarella in bread, although the ever-cautious Wikipedia does not go there.

The Italy Heritage website does, however, saying it appeared on the menu at the Hotel Quisisana in the town of Capri in the early 1920s and where in 1924 (the website claims) Filippo Tommaso Marinetti, the founder of Futurism, “raged against pasta, calling it outdated”. In short, he wanted pasta abolished. Which makes me want to rush out and order a large plate of pasta which, of course, quickly faded into ignominy and has scarcely been heard of since. A true visionary, that man.

But the La Cucina Italiana website offers a different perspective: “In 1932 Marinetti published a cookbook titled The Futurist Cookbook, which criticised much of Italy’s food traditions, particularly taking a swipe at pasta (the nerve of him!). so it’s said the hotel (Quisisana) created Caprese salad, a pasta-less dish in honour of these contrarians.” Since Marinetti’s Futurist Cookbook only appeared in 1932, the Italy Heritage date seems suspect.

Then again, Marinetti was a proponent of futuristic vegetarian cooking of lighter flavours without flour, and one theory has it that it was invented in honour of his “manifesto” of this approach to food; and in that, of course, his futurism was wildly on the mark. Except for vegans who, I’m sure, will have issues with that cheese right there. Anyway, he tried.

In the 1950s, so the (possibly apocryphal) story goes, King Farouk of Egypt and the Sudan apparently demanded something light after a day on the beach and was served some mozzarella with tomatoes and basil, ensuring the future worldwide popularity of a dish that could easily have remained in obscurity.

There are rules, as befits anything of fascist origin. The italyheritage.com website offers clear direction as to how a Caprese salad is expected to be made on the Isle of Capri.

The mozzarella must be large, weighing “at least half a kilo”, and small mozzarelle “are therefore not suited”. Quite what calamity will befall the offending chef who fluffs it up is not explained, but one imagines the consequences would possibly involve barbed wire and lots of manual labour, perhaps hefting very large mozzarelle around from dawn till dusk.

The second factor likely to get you into trouble is choosing tomatoes that are neither unripe nor overripe. The colour of the tomatoes should be “ramato”, a sort of copper red.

The key is that the tomatoes should have some juice in them, and this juice is used to be mixed with olive oil to dress the salad on the plate. Underripe and there’s not enough juice and it’s not sweet enough, whereas overripe and it’s going to be dessert, so get on that naughty step over there and Aunt Lydia will be along shortly.

Basil leaves must be torn by hand, but most of us know that anyway.

Don’t even think of substituting oregano leaves for the basil, or it’s to the wall with you. And it’s an antipasto (starter) rather than a contorno (side dish).

Finally, if it’s a good quality mozzarella, the cheese will squeeze out a little milk, and this also helps to moisturise the salad on the plate.

Talking of which, it does not have to be a salad. This beloved combination can be used atop a pizza, in a bread roll or sandwich, and in a pasta dish. (Nicely ironic, nê?)

But I kept it simple and traditional this week, while employing that trick of using the tomato juices in the dressing. I also included a drizzling of balsamic reduction, this being a relatively recent addition to many Caprese salads. Strictly traditionally, though, it would only need those tomato juices and extra virgin olive oil (and some purists don’t even want that), and not too much of it or Aunt Lydia may need to be summoned again.

Once assembled, the Caprese Insalata should be left to rest for 15 minutes, and only then consumed. Honestly, it’s a nightmare fraught with danger at every turn. Rather order a Niçoise.

6 small ripe but not overripe tomatoes, sliced into 4 slices each (careful)

A drizzle of balsamic reduction

Slice the tomatoes and lay them out. Grind coarse salt over them. After 15 minutes, drain the juices off into a bowl and reserve. Add to this the olive oil.

Slice the mozzarella thinly or break it into small chunks.

Lay the tomato slices on two plates in a pattern that pleases you, interspersed with mozzarella slices.

Drizzle the olive oil and tomato juices over.

Drizzle balsamic reduction here and there but don’t overdo it.

Scatter basil leaves here and there. Or you could intersperse basil leaves between the tomato and mozzarella slices. Check the room for hidden cameras. DM/TGIFood