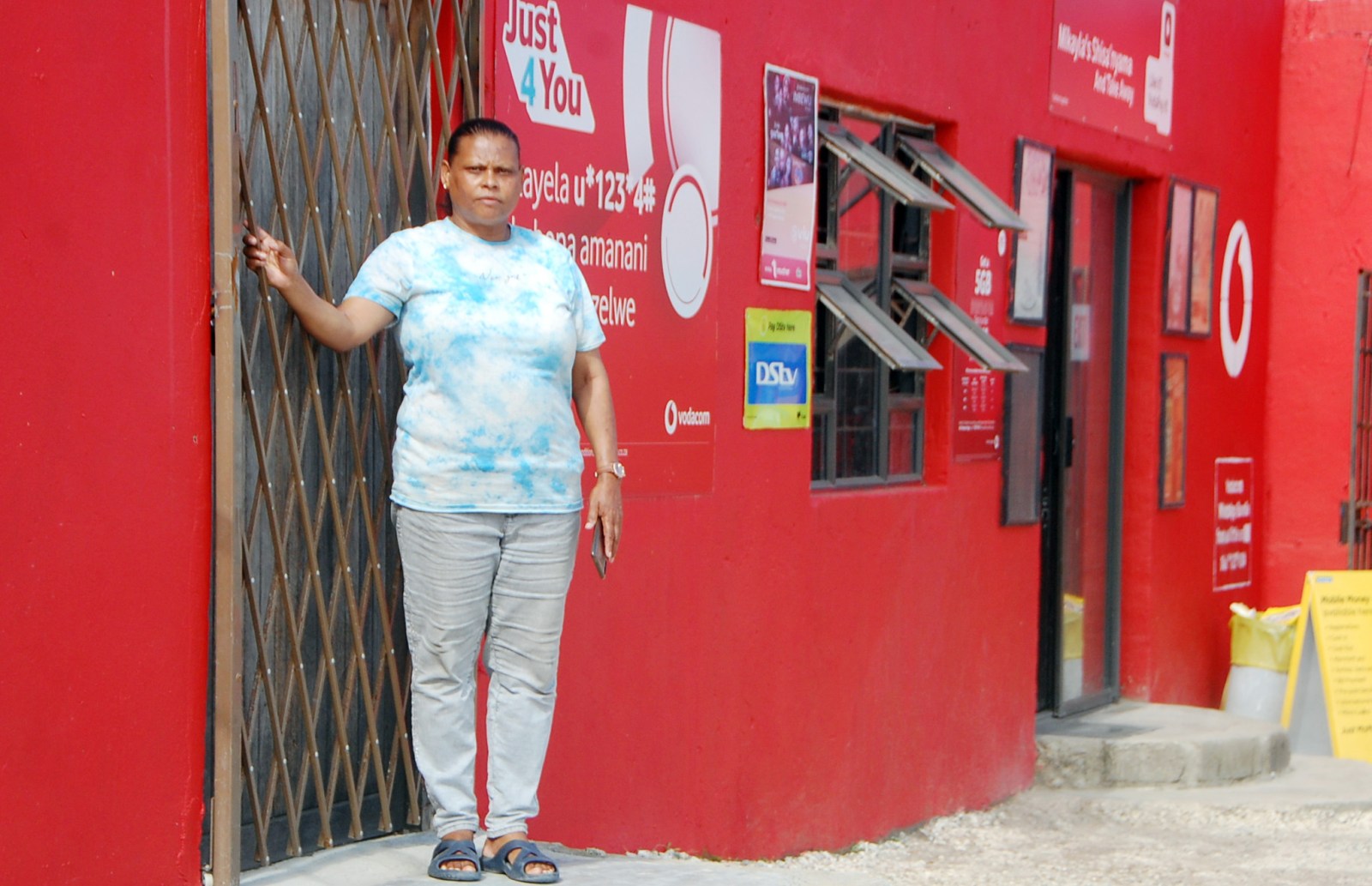 Aisha Seleke from Qinabhawodi area near Port Shepstone on the South Coast of KwaZulu-Natal. She is at the entrance to her salon — now closed due to the lack of water. (Photo: Phumlani Thabethe)

Businesses on the South Coast in KwaZulu-Natal say they are at the end of their tether due to a water crisis that has been dragging on for years. And they see no light at the end of the tunnel.

Tourism is the economic lifeblood of small coastal towns on KwaZulu-Natal’s South Coast, but that revenue source is drying up almost as fast as their water supply.

According to George Henderson, Democratic Alliance councillor for Uvongo,  Malabo and St Michaels on Sea in the Ray Nkonyeni Local Municipality, 80% of business in the region comes from tourism. He said the area is suffering immensely because “tourists cannot visit the South Coast when they know they won’t have water”.

With its sub-tropical climate, warm sea and beautiful beaches, the South Coast has long been a favourite holiday destination for visitors from abroad and other parts of South Africa. However, this is rapidly changing.

Leka Reddy runs B Cubed Guest House and Leka’s Food and Beer Garden in Port Shepstone. She said the constant water cuts have dealt the tourism industry a massive blow.

“We have been having this problem for years, but the municipality doesn’t seem to have a solution. We have been forced to buy water tanks, also known as JoJo tanks.

“Because we are in the tourism sector, we have observed that fewer tourists are coming to the South Coast. Even those who come, leave after two or three days because they cannot cope without water,” she said.

Reddy said the water crisis was exacerbated by Eskom’s load shedding. “We have to use electricity to pump water into the guest house and the restaurant. But when we don’t have water and electricity, we have to close everything down… you need water to run the restaurant.”

Reddy said she has been forced to lay off staff and put others on short time because of the crisis.

“With the money the municipality collects from residents, it is supposed to have solved this problem a long time ago.”

Margate residents said a popular eatery, the Friar Tuck Restaurant, was forced to close due to the water cuts.

The Pumphouse Family Restaurant and Bar, another favourite in the area,  is operating under trying circumstances. Manager Edward Retief said they have a 5,000l tank that pumps water into the premises.

“We are trying to adapt accordingly. Luckily for us, we have never had a situation where we have had to close down. But we are operating under these circumstances,” he said.

Dominique Read is the manager of the Superbodies Gym in Margate. She said many of her customers have cancelled their contracts because they cannot use the showers after a workout.

“Many of our customers used to come and work out in the morning or during lunch. Now they prefer not to come at all because they say they cannot shower before heading back to work,” she said.

“Every December there seems to be a problem that ensures we don’t have water. It is either a strike or some kind of sabotage. This December, we didn’t have water for 15 consecutive days. This is unbelievable. We have to buy water every day for drinking, washing and bathing,” Read said.

Angie Clench, who runs the Karisma Hair Salon in Southbroom, said they have to close down when there is no water as the business relies on water to operate.

July Akhuni runs a shisanyama and salon in the Qina Bhawodi area, just outside Gamalakhe township. She said she has to close down because of the constant water cuts.

She said the water shortages are not only affecting her businesses, but her family life has been disrupted. She said her children had to miss school for several days because the family had no water to drink, wash with or flush the toilets.

“A few years ago, we were relieved when we saw Ugu District Municipality digging trenches and installing pipes. But that joy turned into sorrow as we still don’t have water in our taps,” she said.

Umzinto businessman JC Padayachie said the intermittent water supply is causing many businesses to lose hope. He said these businesses were also affected when angry residents shut down the town with violent protests.

“We were told we couldn’t open for business. We lost out due to the protests. However, the anger of the people is understandable because we live here in Umzinto and we are affected by the same problems that these communities are experiencing,” he said.

Municipality claims to be doing its best

The Ugu District Municipality has denied that incompetence, fraud and corruption are responsible for the water crisis on the South Coast.

It admitted that it experiences challenges during peak season, such as the December holidays, but maintained that residents on the South Coast more often have water in their taps than not.

Municipal spokesperson France Zama claimed they are doing everything in their power to ensure that the water shortage is sorted out once and for all.

“During peak season, where large volumes of people flock to the district, our systems are likely to experience strain due to the high demand of supply. Our water systems are also highly reliant on Eskom power supply to function adequately… When there are power blackouts, the risk of intermittent supply also increases.

“Abstraction, purification and distribution rely on power in order to provide adequate pressure to high-lying areas, which also has an impact on filling of reservoirs adequately,” he said.

Zama acknowledged receiving R19-million from the KZN Cooperative Governance and Traditional Affairs department to sort out the water crisis.

“In terms of the R19-million from Cogta, R15-million will be used for the overhauling of mechanical and electrical infrastructure at our plant, while R4-million is set aside for boreholes and springs.

“We also have a rudimentary water supply programme incorporating the use of boreholes and spring water. A spring protection and borehole maintenance programme to support supply to communities is also in place,” he said.

The Ugu District Municipality denied allegations that some contractors were working in concert with unscrupulous officials to sabotage its water supply infrastructure to continue getting contracts to supply water to desperate communities.

“During the recent peak season… there have been no incidents of sabotage reported in the municipality. The municipality has, however, in the past suffered water supply challenges due to vandalism and sabotage.

“Residents with such information (of intentional vandalism and or sabotage) are encouraged to report such information to the municipality or local law enforcement authorities. We also have an anti-fraud and corruption hotline 0801111660 or SMS 44751,” Zama said. DM/OBP