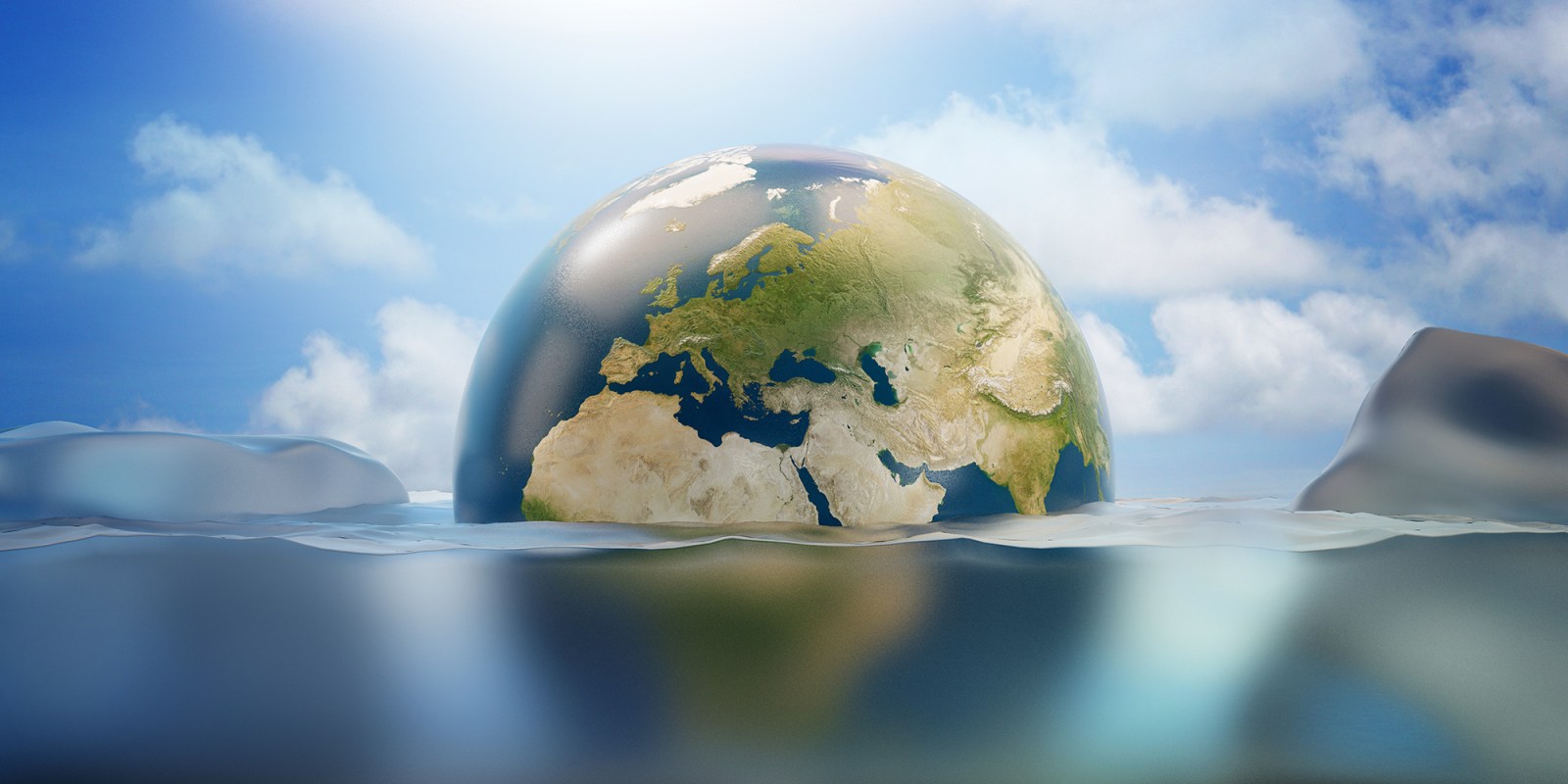 In just a few decades rising sea levels and erosion are set to alter Africa’s shoreline, wiping out important heritage sites, some of which are not yet known to science, a new study shows.

Accelerated sea rise is threatening everything from the ancient Roman city of Tipasa in Algeria to the mouth of the Orange River, and many other cultural and natural heritage sites in between.

This is according to a study that, for the first time, has provided a comprehensive assessment of the threat that climate change, particularly rising sea levels, poses to Africa’s coastal heritage sites.

Sea levels have been rising at a faster rate over the past three decades compared with the 20th century, a process that is expected to gather pace through the 21st century. With changing weather patterns, this is expected to intensify coastal flooding and coastal erosion, exacerbating damage to coastal zone assets, the study reports.

For a year, a global team of researchers — including the University of Cape Town’s Dr Nicholas Simpson of the African Climate and Development Initiative — mapped 284 African coastal heritage sites, both natural and cultural. They then exposed each site to future global warming scenarios.

What they found does not make good reading. 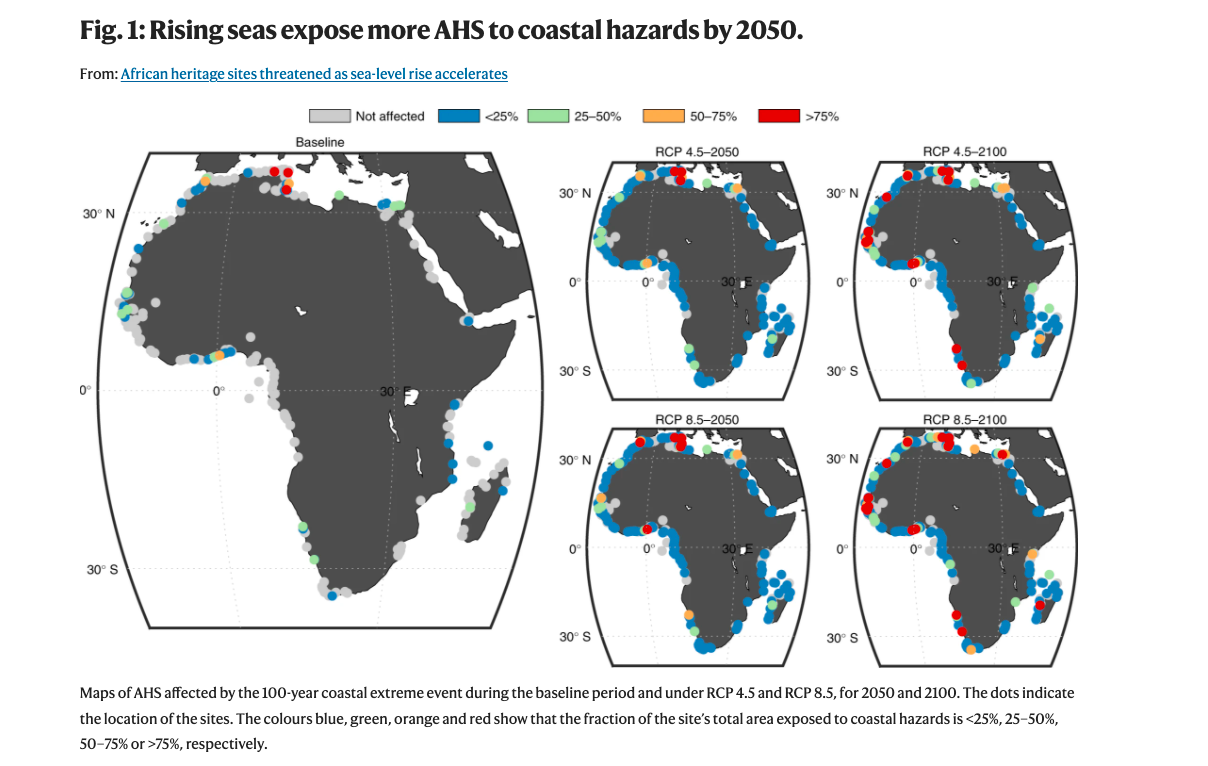 Currently, of the 284 African coastal heritage sites, 56 are at risk from a one-in-100-year extreme sea-level event.

“You do know, because of climate change those one-in-100-year events will become more frequent in the future, and just how frequent we just don’t know,” explains Professor Joanne Clarke of the University of East Anglia, who was the lead author on the study that appeared in the journal Nature Climate Change.

By 2050, the number of exposed sites is expected to reach 191 of the 284, in a scenario of moderate sea rise. Under more extreme climate change modelling the number jumps to 198.

In this scenario, the entire Mozambique coastline is threatened and the coastal forts in Ghana that tell the story of African slave trade are under water, while in South Africa important wetlands and their ecosystems are wiped out by the rising sea.

Of most concern in South Africa, according to the report, is the Orange River Mouth in the Northern Cape.

“So, in 2010, its exposure (to a one-in-100-year event) was at 30%. This increases, at the end of the century, under moderate emission scenarios, to 93%. Then to 100% at the high-end scenario. So it’s really exposed,” says Clarke of the threat facing the Orange River Mouth.

Other wetlands such as De Mond in the Western Cape and the iSimangaliso Wetland Park in KwaZulu-Natal are also likely to be affected by what is called the bathtub effect of rising sea levels, along with coastal erosion.

It is not just the coastline — small island heritage sites are also at risk.

These include Aldabra, the world’s second-largest coral atoll, and Kunta Kinteh Island in Gambia. South Africa’s own Robben Island too is likely to be altered by climate change, although even with high-end modelling scenarios this cultural heritage site will largely remain above sea level.

“The problem is that we could only use 284 sites, which are mostly published. The African coast has thousands of sites, which are not included,” explains Clarke. For example, Somalia is not a party to the Unesco Convention and therefore its sites cannot be inscribed on the World Heritage List. One of these is Hafun, a Roman-period trading port.

“But we couldn’t map it because we needed a defined methodology and it didn’t fit within that.”

Dr Sue Taylor of the University of the Free State points out that climate change is just one of many threats facing heritage sites that are becoming increasingly difficult to deal with.

“Climate change comes on top of this and it is a double whammy. The problem is that with some of these sites, because of limited resources, it might be a question of letting them go,” says Taylor, who wasn’t a part of the study.

Besides the funds needed to conserve these sites, Clarke said another issue is political will.

“Many don’t care, or can’t care because there are other priorities.”

However, for the likes of politicians and others to make better-informed decisions to protect these heritage areas in the future, Clarke and her colleagues will be doing more detailed research.