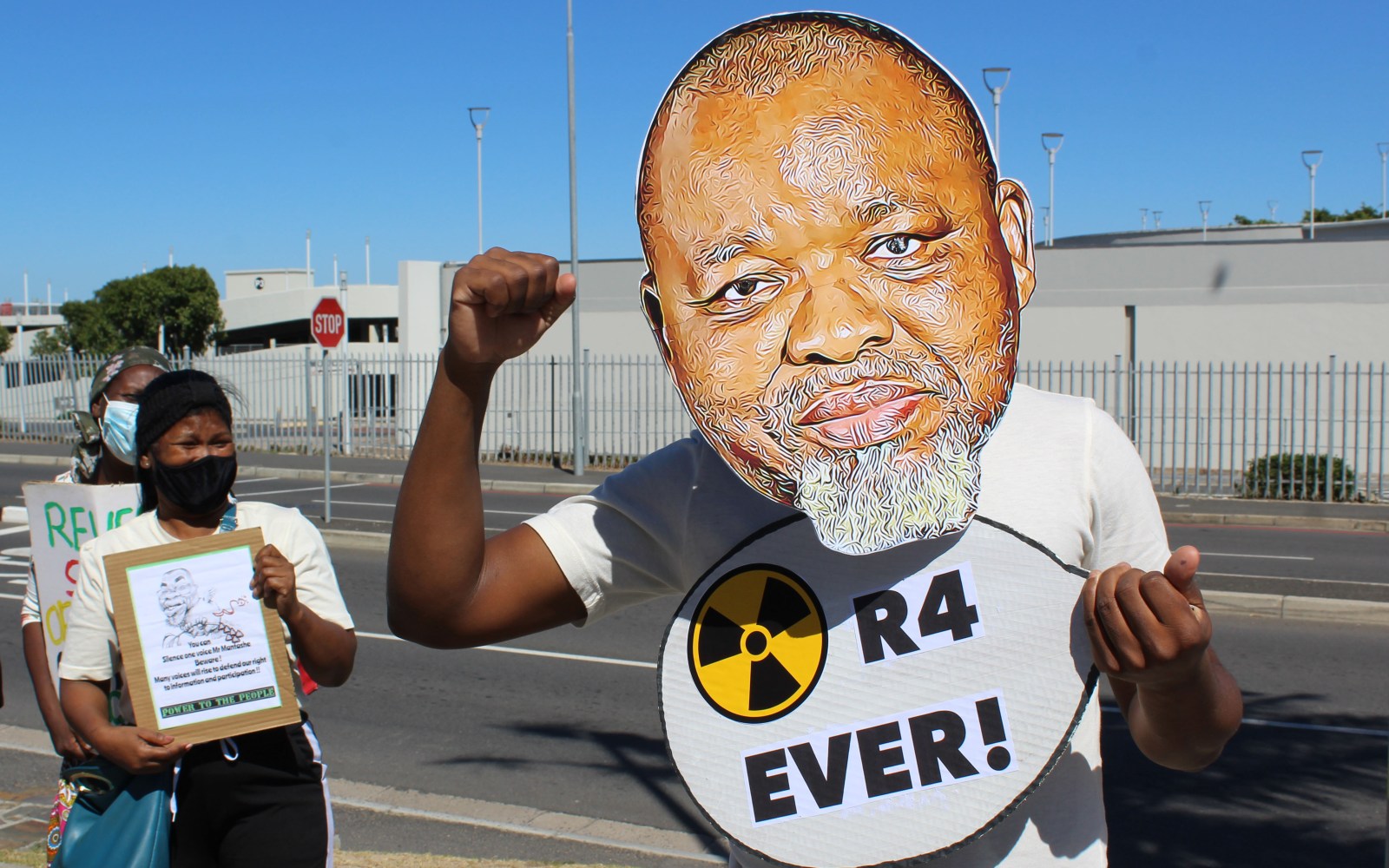 A protester in a mask depicting South African Minister of Mineral Resources and Energy Gwede Mantashe raises his fist at a protest for the National Nuclear Regulator (NNR) to be transparent following the suspension of civil society board representative Peter Becker. The protest took place outside the NNR office in Table View, Cape Town, on 17 February 2022. (Photo: Tamsin Metelerkamp)

Members of various civil society organisations gathered outside the National Nuclear Regulator office in Table View, Cape Town, on Thursday to demand greater transparency around the suspension of Peter Becker, the community representative on the board. A memorandum of the protesters’ demands was handed over to a representative of the regulator. This comes after Minister of Mineral Resources and Energy Gwede Mantashe postponed his decision on whether Becker should be discharged.

The suspension and potential discharge of Peter Becker, the civil society representative on the National Nuclear Regulator (NNR) board, by Minister Gwede Mantashe of the Department of Mineral Resources and Energy (DMRE), is inconsistent with transparency and the need for community interests to be represented on the board.

This was according to a memorandum of demands read out by Francesca de Gasparis, executive director of the Southern African Faith Communities’ Environment Institute (Safcei), at a protest outside the NNR office in Table View, Cape Town, on Thursday.

“Accountability, responsiveness and openness are foundational principles of our constitutional democratic state,” read De Gasparis. “The NNR Act is the enabling legislation that stipulates that the NNR board consists of various directors appointed by the Minister [of the DMRE], including ‘one person representing communities, which may be affected by nuclear activities.’”

About 25 protesters representing Safcei, Project 90 by 2030, 350Africa.org, Koeberg Alert Alliance and the Federation for a Sustainable Environment gathered outside the NNR office to protest Becker’s suspension. They demanded Becker’s immediate reinstatement to the board by Mantashe.

Other demands detailed in the memorandum, directed to Dr Thapelo Motshudi, chairperson of the NNR board, and Dr Bismark Tyobeka, CEO of the board, were:

“We are here today because regardless of what our energy future looks like, despite what I want it to be, despite what ten other people here want it to be, it has to be made together,” said Gabriel Klaasen, communications officer and advocate at Project 90 by 2030. “We have to imagine […] and create our energy future together. If we don’t do that, and only one section of our society creates that — a section that’s oftentimes viewed as non-transparent, as secretive — we are not going to achieve the world that we want.”

Lorna Fuller, director of Project 90 by 2030, echoed this sentiment, explaining that without Becker present on the board as a voice for civil society, her organisation has very little faith in the decisions the NNR makes.

“Peter [Becker] was chosen as our representative because he has such an interest in nuclear,” said Fuller. “He’s travelled, he’s seen nuclear sites, he’s seen where the accidents have happened. He’s the person we trust the most. [H]e really best speaks to our interests and understanding the things that they [the NNR] talk about.”

The protesters’ memorandum was handed over to Peter Bester, Programme Manager: Nuclear Power Plants, during the course of the demonstration. Daily Maverick approached Bester for comment after the handing over of the memorandum, but he declined to speak on the matter.

Mantashe was due to deliver his decision as to whether Becker would be discharged by 15 February 2022. According to Becker, this came after he sued both Mantashe and the NNR board on 28 January 2022, resulting in an urgent court date set down for 8 February 2022.

The matter was settled out of court, with Mantashe agreeing to give his decision by the aforementioned date, and the NNR agreeing to suspend all board and subcommittee meetings, as well as all board and subcommittee decisions, until Mantashe made his decision, according to a press release by nonprofit organisation Save Bantamsklip from 9 February 2022.

However, the minister failed to give his decision by 15 February, instead issuing Becker with a letter offering additional time for him to respond to specific allegations of misconduct.

In the letter, Mantashe notes Becker’s assertion that the minister failed to identify the grounds on which he intends to discharge Becker. This in turn had made it difficult for Becker to contest the allegations.

The specific allegations against Becker, as laid out in Mantashe’s letter from 15 February 2022, include:

In detailing these allegations, Mantashe mentioned Becker’s role as spokesperson of the Koeberg Alert Alliance, an anti-nuclear organisation.

“It appears to me that you may be impossibly conflicted in your respective roles, as an anti-nuclear activist, and as a member of the Board,” said Mantashe.

Becker, however, contended that having a variety of opinions on the NNR board is a source of strength. He pointed out that the board includes a representative of the DMRE, which is known to be pro-nuclear.

“At least I was the voice there to put an alternative view forward, […] not about whether nuclear is good or bad, but about how cautious we should be,” said Becker.

Speaking at Thursday’s protest, De Gasparis said, “We’re really concerned [about] this idea that if you’re anti-nuclear energy, and you’re representing community voices, that the National Nuclear Regulator wouldn’t want you on the board, and that the Minister has said that’s one of the key reasons why he doesn’t want the current community representative on the board.”

“Surely, the issue that we’re faced with is you want someone who is critical and concerned about the impact of nuclear energy on communities on the board,” she continued. “And what we’re seeing is an actual removal of that person.” DM