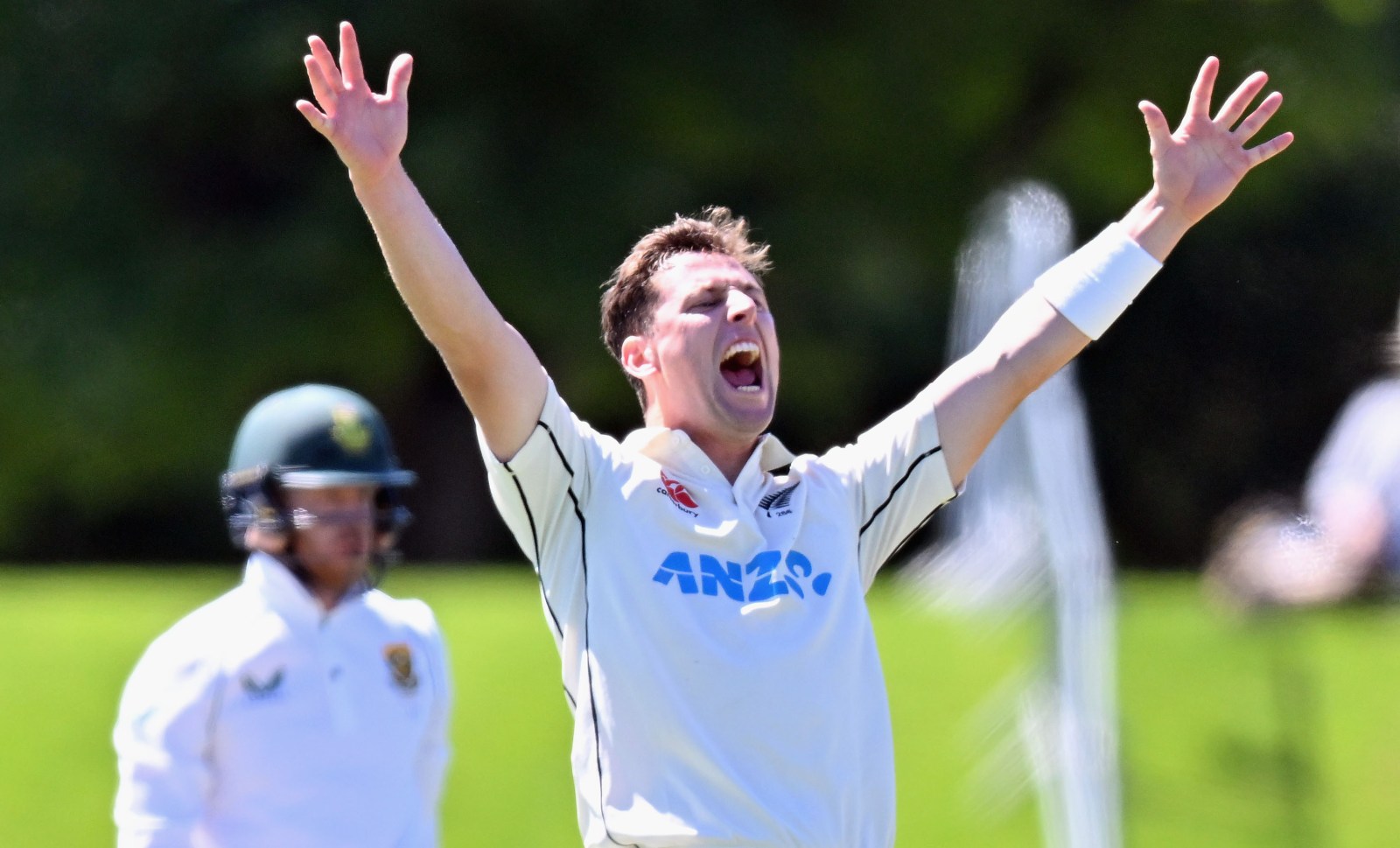 Matt Henry of New Zealand celebrates taking a wicket during day one of the First Test Match in the series between New Zealand and South Africa at Hagley Oval on February 17, 2022 in Christchurch, New Zealand. (Photo by Kai Schwoerer/Getty Images)

South Africa were dismissed for a paltry 95 against New Zealand in the first Test at the Hagley Oval on Thursday, setting an unwanted record.

It was the first time in 90 years that South Africa were bowled out for under 100 batting first in a Test. The last time it happened they were skittled for 32 by Australia in Melbourne in 1932. On Thursday it was at the picturesque Hagley Oval in Christchurch that set a new low benchmark for the 21st century.

New Zealand seamer Matt Henry, playing at his home ground and only in the side because regular strike bowler Trent Boult was out due to the birth of his first child, took his opportunity gleefully.

The right-hander returned career-best figures of seven for 23 in just 15.1 overs, to set his side up for victory on day one of this short two-Test series. The home side closed the day at 116 for three and lead by 21 runs with seven wickets in hand. It’s a long way back for the Proteas already.

Henry took three wickets before lunch and added another four after the break, including three in a single over, to place his side in a commanding position, not only in the match but in the series too.

The Proteas didn’t post a score of more than 300 in the recent series against India, which they won 2-1, although they twice made in excess of 200 with only three wickets down in winning chases. But those are the exceptions, as the batting unit continues to be as fragile as a despot’s ego.

The lacklustre batting, which saw the recalled Zubayr Hamza top score with 25, was complemented by dozy fielding. The Proteas dropped four catches in the afternoon as New Zealand ended the day in command. The home team could have been five or six down and this match would feel closer. As it is, the Proteas are in deep trouble.

Only seven times in the history of the game has a team scoring fewer than 100 in the first innings of a Test, gone on to win the match. And it’s happened only twice since 1907. The portents for a South Africa win from here, are not promising then.

Sarel Erwee made his debut in place of the absent Keegan Petersen, opening the batting. Aiden Markram dropped down to No 3 after a torrid series against India as opener, but the reshuffle didn’t work.

Erwee (10) made a promising start but was undone by a superb Kyle Jamieson delivery that forced the left-hander to play at a ball around off stump. Erwee nicked it and first slip Darryl Mitchell gobbled up the catch.

That came after Proteas skipper Dean Elgar edged Henry to second slip where Tim Southee took a sharp diving catch, dismissing the skipper for one.

Markram battled to 15 and then reviewed when he was given out playing a back-foot drive off Henry. Replays showed a feather of nick and he was back in the pavilion and left to rue another failure. The scar tissue is mounting up for this gifted, but out of sorts player.

There was also a recall for Hamza in the middle order. The decision to replace spinner Keshav Maharaj from the side that beat India by seven wickets in Cape Town last month was not a surprise.

The only slight eyebrow-raising aspect of it was that Ryan Rickelton wasn’t picked over Hamza, as he has been in the squad for months while Hamza was only recalled for this tour.

But if Rickelton were selected, the Proteas would be playing three debutants in this match (Erwee and seamer Glenton Stuurman being the others). As it was, Hamza top-scored with 25 before being caught behind off Henry.

The Hagley Oval green top was always expected to favour the bowlers, and 13 wickets in the day underlines that the picturesque venue is a seamer’s paradise.

Proteas seamer Duanne Olivier, who took two wickets late in the day, admitted that it was “not a 95 pitch,” but said that the tourists had not given up hope because of one bad day.

“Tomorrow is another day. We are still in the game, there’s so much cricket to be played,” Olivier said.

“The first hour tomorrow will be key for us and if we do well in that first hour it will bring us back into the game. We are a bit behind the eight ball…but we can still bowl them out for 180. Today was their day and tomorrow might be ours, things can swing 180 degrees. It’s just about sticking to what we’ve been doing. We can just look back to the India series to see that it is important that we stick to our gameplans.”

Black Caps captain Tom Latham won the toss — the 16th time the Proteas have lost the toss in their last 17 Tests — and didn’t hesitate to bowl.

It was the wise and obvious choice even without Boult, his front-line seamer. New Zealand are not the World Test Champions without reason, and Henry calmly and lethally stepped into the breach in only his 15th Test since making his debut seven years ago.

Henry plays his first-class cricket at the Hagley Oval and was quick to find his line and length on a pitch he knows so well.

“You’ve got to kind of pinch yourself a little bit when you hear those stats and to be able to share that with Sir Richard Hadlee is pretty special,” Henry said.

“It was a pretty surreal moment really. “I think just playing here at Hagley and having that experience and knowing what my lengths were and how to operate (helped).

“As a bowling group, I think we bowled really well together and we were able to create pressure at both ends and not really let them go anywhere, which is probably key to how we got the wickets.” DM