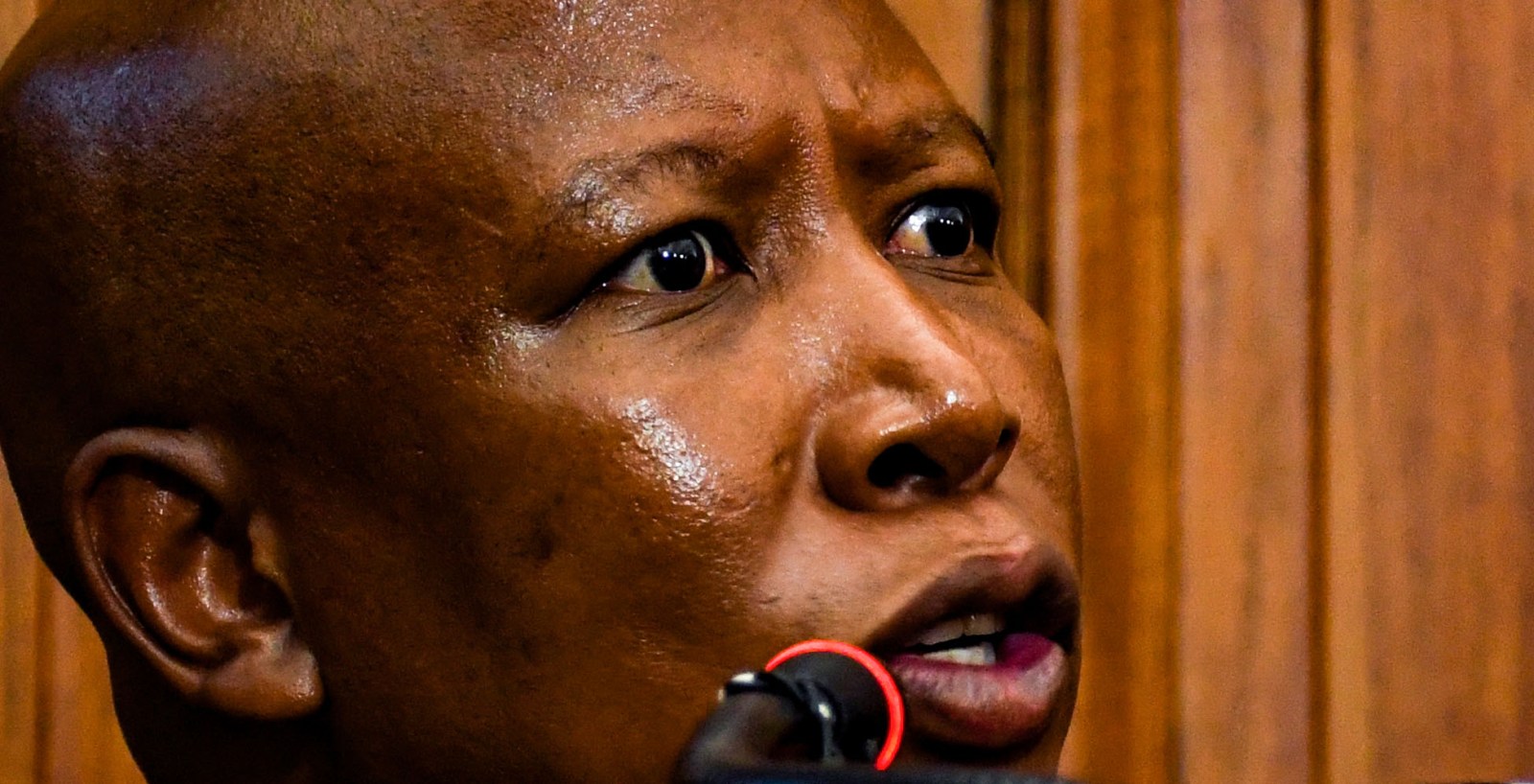 EFF president Julius Malema standing as a witness in the civil case brought by AfriForum at the Johannesburg High Court on 16 February 2022. (Photo: Julia Evans)

During the ongoing ‘hate speech’ civil case brought about by AfriForum over the singing of ‘Shoot the Boer’ the applicant’s lawyer and EFF leader Julius Malema engaged in a debate of sorts over the trauma of white farmers and black South Africans.

‘Why can’t you take responsibility? Why can’t you for once just say sorry for the crimes you have committed?” asked Economic Freedom Fighters (EFF) leader Julius Malema of advocate Mark Oppenheimer on Thursday.

“Why do you want to become victims, when we are the biggest victims here, when we have lost everything, when we as black people remain a traumatised nation?”

On day eight of the “hate speech” case brought by AfriForum, Malema stood as a witness for the second consecutive day at the High Court in Johannesburg, where he was cross-examined by both his defence and AfriForum’s advocate.

AfriForum first lodged a complaint against Malema, EFF member Mbuyiseni Ndlozi and the EFF party in October 2020 after supporters of the EFF sang Dubul’ibhunu, which translates to “shoot the Boer”*, outside the Senekal Magistrates’ Court during the bail hearing of those accused of murdering Free State farm manager Brendin Horner.

As was the case on Wednesday, Malema emphasised that the Struggle chant “Shoot the Boer/Dubul’ibhunu” is not a command, and the word “boer” or “farmer” doesn’t refer to an individual but represents the system that dispossessed black people of their land.

Malema denied that the song could influence anybody to murder a farmer.

“His [a hypothetical murderer’s] actions will not be inspired by the revolution, but by criminality,” said Malema.

As was the case on Wednesday, Malema used his time on the stand as an opportunity to “teach a class” about his political ideology.

Julius Malema has been granted a grand platform to place his manifesto and display his political and philosophical prowess. To teach a class!

Many people on social media expressed support and respect for Malema.

Oppenheimer and Malema sparred over the injustices and trauma of white farmers and of black people in South Africa.

Oppenheimer read an article from South Africa Today from 2016, taken from Ernst Roets’ book Kill the Boer, often cited in the case – a book Malema said he does not want to touch, as it is tainted with “the blood of black people”.

Oppenheimer read about the case where Alice Lotter (76) and her daughter Helen (57) were tortured to death on their Free State farm in 2009, with graphic detail of the torture and murder of the two women, saying their blood was used to write “kill the Boer” on their homestead.

“What’s your reaction to that?” asked Oppenheimer.

“It’s a criminality – people commit criminality and write whatever they want to write,” responded Malema, bringing up a case where a white farmer tortured and killed a 13-year-old black boy, and asking why Oppenheimer did not cite that case.

After much back and forth, Malema said that unlike the case with the woman, the case involving the young boy was racially motivated and could be considered a hate crime as the white farmer was the one in the position of power.

“Now that just shows me how sick and twisted your ideological position is,” said Oppenheimer.

Malema responded, “No, your definition of power is so naive and shallow. I talk power in terms of the relationship to the means of production.”

Oppenheimer said that Malema’s tactic of attributing guilt through groups – not judging people on an individual basis – was “sinister” and not in line with the Constitution.

The EFF leader said that white people today are still benefiting from the injustices of the past.

“My brother, when the white people came into government, they didn’t come and take our land individually,” said Malema.

“They took it as settlers, and then pushed us to a land that is not even productive, and made us… stay like sardines.

“And then you come here and want to accuse me, a victim of racism, of being a racist? That is insulting. Madiba coerced us into reconciling with people who we have never been one with. That was a myth. It is unrealistic, you can’t reconcile if you’ve never been together.

Malema said to the judge that it was unfair to be interrogated by someone who “promotes racism”.

“You know what’s unfair,” responded Oppenheimer, citing the trauma of witnesses who had appeared in this case, white farmers who survived farm attacks and witnessed their family members being murdered.

“That’s real trauma,” said Oppenheimer. “The testimony from them was that when they hear chants like ‘Kill the Boer’, that brings back those memories of real trauma… and you have taken the position… that only your pain matters. That strikes me as a failure of humanity.”

Malema then asked if the trauma of his parents, who picked up the dead bodies of their children in Soweto, was not real trauma.

“I was young when police walked into my mother’s house and she was sleeping. Men took off her blankets… I live with that for the rest of my life,” reflected Malema.

“That is not real trauma, because it’s not white. A black child’s trauma is not a trauma. We are still a traumatised nation if you don’t know.”

Court proceedings continue on Friday when an expert witness in African music and chants will appear. DM

* This article was updated with the correct translation.