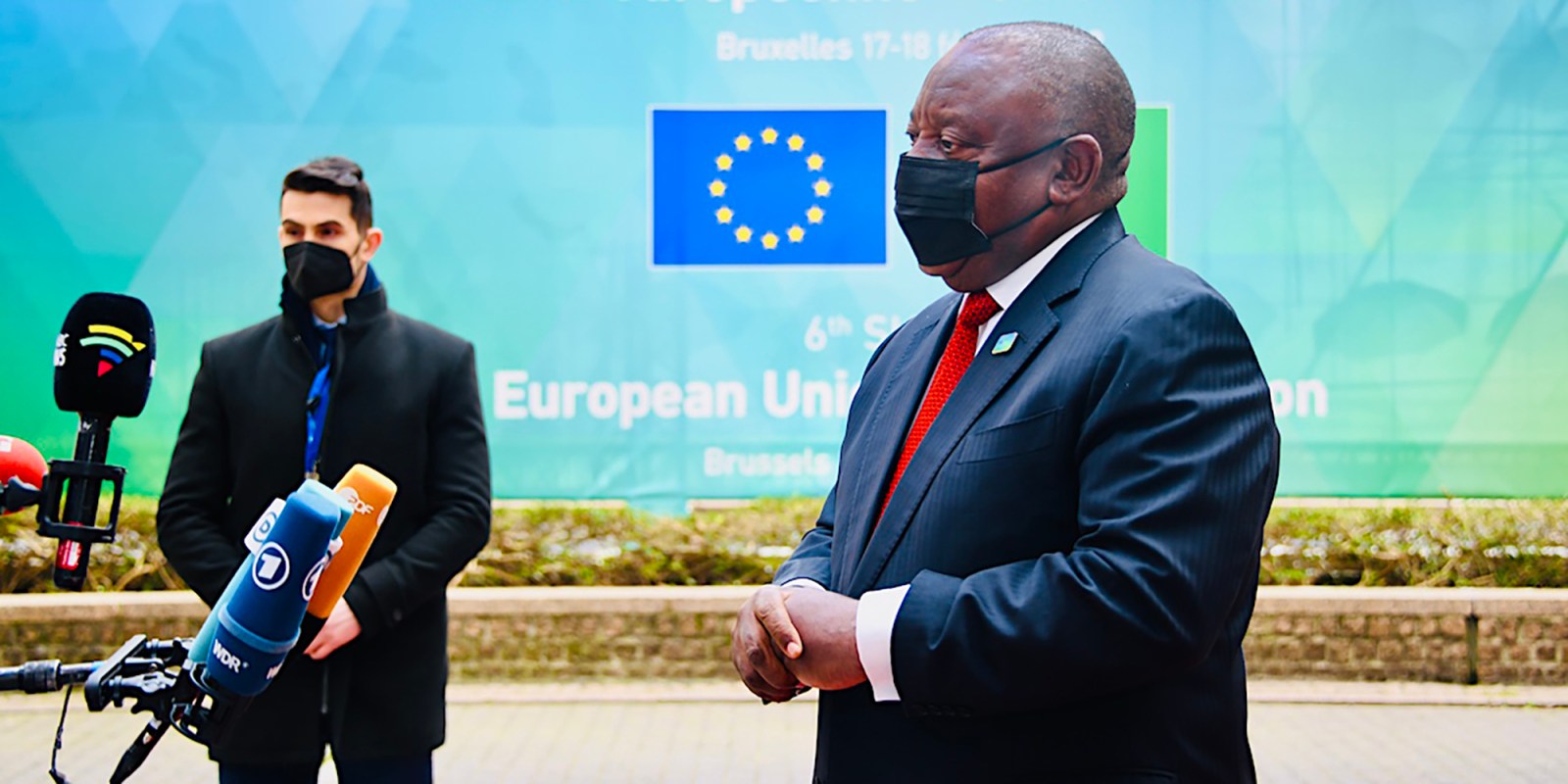 President Cyril Ramaphosa speaks to the media on his arrival for the 6th African Union-European Union Summit at the Justus Lipsius building, EU Council Headquarters in Brussels, Belgium, on 17 February 2022. (Photo: GCIS)

Conflicts in Africa and Covid-19 vaccine equity top the agenda at the sixth African Union-European Union summit which began in Brussels on Thursday afternoon.

President Cyril Ramaphosa disembarked from his British Airways flight in a chilly Brussels on Wednesday morning with the promise of a brief two-day respite from the political fires back home while engaging in some in-person diplomacy.

Like most of his counterparts, he didn’t travel to Addis Ababa for the AU summit earlier this month, which only 13 heads of state attended. For this week’s summit, 40 continental leaders showed up, proof, an EU official said, of its importance.

The summit was supposed to take place in 2020, three years after the previous summit in Abidjan, but the Covid-19 lockdowns made this difficult. Brussels was still careful not to turn the summit into a super-spreader and all attendees were forced to take a Covid-19 test within 48 hours of the start of the summit, with another requirement of a rapid test at the start of the second day.

Coup leaders — from Mali, Burkina Faso, Guinea and Sudan — were not invited since the AU suspends the membership of countries with governments that came about through unconstitutional means. A number of these coups were, however, related to the fact that the elected governments failed to develop an effective response to the deteriorating security situation in the region.

Just before he departed for the summit on Wednesday, Ramaphosa told journalists in Cape Town “it’s an important summit” where economic and infrastructure growth in Africa, and the EU’s role in it, as well as Covid-19 support, will be discussed.

Shortly after the opening session in the Justus Lipsius building atrium, which accredited journalists were forced to watch by livestream in a room next door, possibly due to security and Covid-19 concerns, Ramaphosa participated in the first roundtable, on climate change.

At a media event on Friday morning, he will appear with World Health Organization officials and French President Emmanuel Macron, who holds the European Council presidency, to announce the first recipients of the mRNA technology on the African continent as part of the EU-funded global mRNA technology transfer hub in Cape Town.

Although this is a good-news story, Ramaphosa might also use the opportunity to speak out critically about the EU’s refusal to agree to waive intellectual property rights that would enable developing countries, including in Africa, to manufacture their own Covid-19 vaccines.

EU officials fear such a waiver could harm competitiveness.

Although the EU is announcing a €150-billion finance package to counter China by developing infrastructure, education and healthcare in Africa, security is the big topic in Brussels this week.

Hours before the summit started, Macron announced that it would withdraw its 2,400-strong contingent of troops, with a few hundred European soldiers, from Mali due to deteriorating relations with that country’s new military leaders. They are expected to be deployed elsewhere.

On Wednesday, Macron met in Paris with France’s European and African partners, as well as Senegalese President Macky Sall, who is chairing the AU, and Ghana’s Nana Akufo-Addo, who is the chair of the Economic Community of West African States.

At the opening of the summit — where most speakers delivered their addresses in French — Sall said Africa wanted “a new, renovated partnership” with the EU. “We are not just talking about updating the software behind our relationship,” he said. “What we want to do is to devise a new software which is appropriate, and which can support the innovative nature of our new relationship.”

He said there will be a new partnership through the European Peace Facility, which could help support the combating of terrorist attacks on the continent.

In his address during the opening of the summit, Macron said in a remark aimed at African leaders: “You have faced terrorism and destabilisation.” Referring to the terrorist attacks closer to home in the past few years, he added: “We have also faced destabilisation here in Europe.”

Macron said poverty and a number of crises gave terrorists an opportunity to flourish.

Referring to the conflict further south, he praised efforts by Rwanda and the Southern African Development Community Mission in Mozambique to counter attacks in the northern Cabo Delgado province.

The EU has been providing support in the form of training missions to Mozambique and looks set to provide funds through the European Peace Facility for the insurgency that has plagued northern Mozambique for the past four years.

The objectives of the summit are to develop a joint vision for Africa and Europe for 2030 by building a “new partnership” between the two continents and cementing the principles underlying this, namely mutual respect, respect of African sovereignty, solidarity, security, sustainability, transparency and multilateralism.

President of the European Commission, Ursula von der Leyen, said the “most precious” investment is in people. She said she met young entrepreneurs who had smart plans, but needed internet access “to develop their brilliant ideas”.

She said Europe wanted a “value-based approach” to investment in the continent and offered “transparency and good governance” to go along with it.

Other issues on the agenda include the speeding up of the reallocation of International Monetary Fund special drawing rights, which could help African countries access the additional resources they need to help them recover economically from the Covid-19 lockdowns, and the repatriation of artefacts in Europe that had been stolen from Africa.

During the Abidjan summit, a lot of the focus was on the prevention of illegal migration from the continent to Europe by those seeking to escape hardships and to make a better life elsewhere. This year, the migration issue is discussed in the same session as education and vocational training.

Leaders “will discuss safe and regular migration as an opportunity,” an EU official said before the summit. DM