SA Rugby reaffirm commitment to Sanzaar until 2025 — but no further 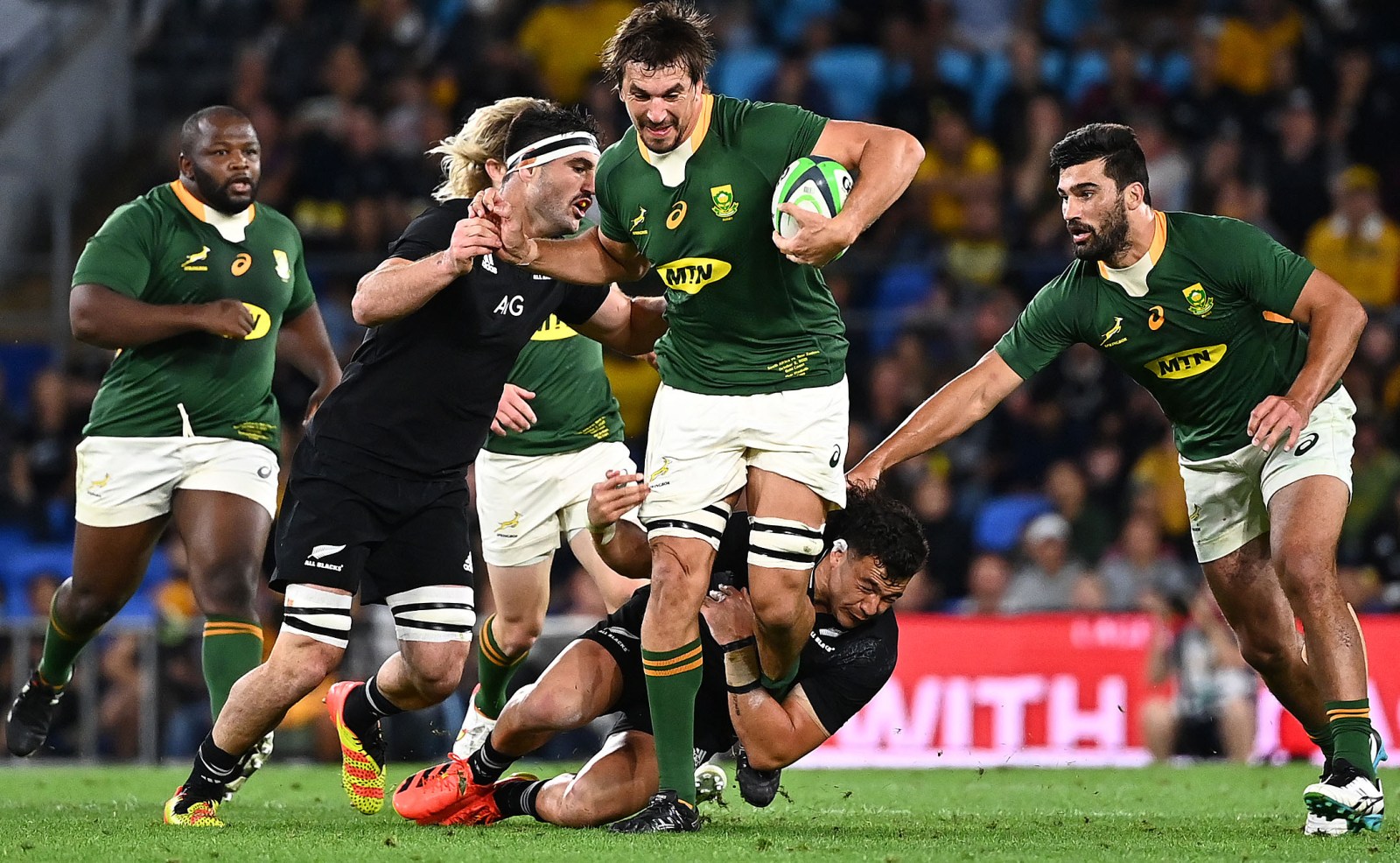 Springboks player Eben Etzebeth in action during Round 6 of the Rugby Championship match between South Africa's Springboks and New Zealand's All Blacks at CBus Stadiumon on the Gold Coast, Queensland, Australia, 2 October 2021. (Phot: EPA-EFE/DAVE HUNT)

The South Africa, New Zealand, Australia and Argentina Rugby alliance confirmed that the Rugby Championship would continue in its current structure as the Springboks eye Six Nations potential.

As far as major announcements go, the news that the Rugby Championship involving the Springboks, All Blacks, Wallabies and Pumas would continue as is until 2025, was hardly revelatory.

South Africa, New Zealand, Australia and Argentina Rugby (Sanzaar) made the announcement in the early hours of Wednesday morning, although there was really nothing new in it.

Sanzaar breathlessly stated that its members had signed a “joint venture agreement” whereby they “committed to the organisation through to the end of the current broadcasting cycle in 2025.”

In early 2020 Sanzaar announced a new five-year deal until the end of 2025, and although aspects have changed around the shape of Super Rugby, the Rugby Championship has not.

In other words, Sanzaar’s release just reaffirmed an agreement that was already in place. What the release couldn’t or wouldn’t clarify was the future of the organisation in this form, and of the Rugby Championship tournament beyond 2025.

And it looks increasingly likely that the alliance might fully fall apart after 2025 if SA Rugby’s ambition to have the Springboks play in the Six Nations is realised.

SA Rugby is close to finalising a deal that will see the Springboks playing in the Six Nations from 2025 (and possibly as early as 2024). That outcome would make the Boks’ participation in the Rugby Championship after 2025 debatable, if not impossible, unless there is a global move towards a more compatible calendar between the northern and southern hemispheres.

It’s possible of course, and in some ways desirable, for the Boks to continue to play against the All Blacks in particular on an annual basis, but it’s no longer guaranteed.

With SA Rugby’s move north, where the country’s four leading franchises have set out their stalls in the newly formed United Rugby Championship (URC), the Sanzaar alliance is crumbling.

The Bulls, Lions, Sharks and Stormers are all involved in the URC now, and from next season — 2022/23 — they will be eligible to qualify for the European Champions Cup.

SA Rugby will also become shareholders in a new company called Pro Rugby Championship, which owns the URC competition. As a consequence, they will have a cut of the broadcast and sponsorship revenues in due course.

In the previous incarnation of PRO14, which featured the Cheetahs and Southern Kings between 2017-2020 in the Celtic/Italian competition, SA Rugby paid R40-million for those teams to play. It was money well spent because it laid the foundation for the current structure with Six Nations inclusion the most important objective.

“South African rugby has for many years imagined a future aligned with northern hemisphere rugby and this announcement marks the arrival of that vision,” SA chief executive Jurie Roux said at the announcement of the URC competition last year.

“Our teams will be pitting themselves against the leading clubs from four nations, steeped in rugby tradition and folklore. They’ll do it without having to cross time zones or acclimatise while 100% of matches will kick off in South African prime time.

“This is a watershed moment in South African rugby history, opening new doors and heralding a new and exciting era for our sport.”

SA Rugby are also deep into talks with CVC Capital Partners, the giant equity fund that has purchased significant stakes in the Six Nations, England’s Rugby Premiership and the URC. It’s a natural progression that the SA Rugby/CVC deal occurs, and part of that deal is having the Boks in the Six Nations.

Aligning with the north, commercially at least, has been the chosen direction by SA Rugby, and there is good reason. The northern hemisphere (mainly through Six Nations) creates 64% of the global rugby industry’s commercial value, according to a report presented to SA Rugby members in 2020.

The pathway to that happening is by playing at club level in URC, and then elevating that to European Cup competitions is confirmed.

CVC bought a 14.3% stake in Six Nations for a reported £365-million last April. It guaranteed a cash injection of £95-million for the Rugby Football Union (England’s governing body) over the next five years and about half that for the Welsh, Irish and Scottish rugby unions. France will also receive £95-million.

The Six Nations purchase was CVC Capital Partners’ third acquisition in European rugby along with portions in URC and the English Premiership, in which it holds stakes of 28% and 27%, respectively.

SA Rugby is now on that train and New Zealand Rugby (NZR) and Rugby Australia (RA) in particular, are being left behind in the race for lucrative commercial deals.

The NZR at least has the powerful All Blacks brand as a leveraging tool, which is why they voted to sell a 12.5% stake to private equity firm Silver Lakes for NZ$387-million (R3.9-billion) last April.

But that move was blocked by the NZ Rugby Players’ Association and the deal has not been finalised. It appears that an agreement for a NZ$262-million (R2.65-billion) sale of a 7.5% stake in NZR might get over the line.

These negotiations in New Zealand, but also in South Africa where the players’ union MyPlayers has been kept abreast of developments over the CVC deal, underlined the need unions have for immediate cash injections.

Even before the pandemic the Sanzaar alliance was battling to sell its broadcast rights for the same value it held 20 years ago (inflation adjusted) because Super Rugby had become such a rudderless tournament through multiple incarnations.

But the financial effects of the pandemic on the Sanzaar partners accelerated the need for cash flow and deepened the fault lines between the partners.

When Covid-19 hit and competitions were suspended, NZR took the opportunity to break away. That point is vital. NZR unilaterally decided to create its own Super Rugby-type tournament from 2021, without consulting its partners in the joint venture.

The ink on Sanzaar’s new five-year broadcast deal with the Super Rugby tournament set to return to 14 teams was not even dry. New Zealand’s decision made it impossible to deliver the 14-team Super Rugby competition that had been agreed by the partners and for which five-year (2021-2025) broadcasting agreements had been signed.

NZR breached that contract when in late July 2020, SA Rugby executives woke up to the news that NZR had announced its future didn’t include South Africa. They wanted to explore an Asia-Pacific version of Super Rugby. That vision has resulted in the Super Rugby Pacific tournament starting this weekend.

Instead of viewing the NZR’s decision and direction as a blow, Roux and his executive moved quickly to open negotiations with PRO14 (now URC). The rest, as they say, is history.

SA Rugby has, for more than a quarter of a century, tethered its wagon to that of New Zealand and Australia, and latterly Argentina, in the Sanzaar alliance. That bond has been crucial for all three founding partners in bringing in billions in revenue over 25 years, but it has always been strained by geography, costs and time.

For now, SA remains part of Sanzaar under existing agreements and terms, despite Wednesday’s release hinting that there was some sort of new deal. DM