How to look through the histrionics on the inflation fr... 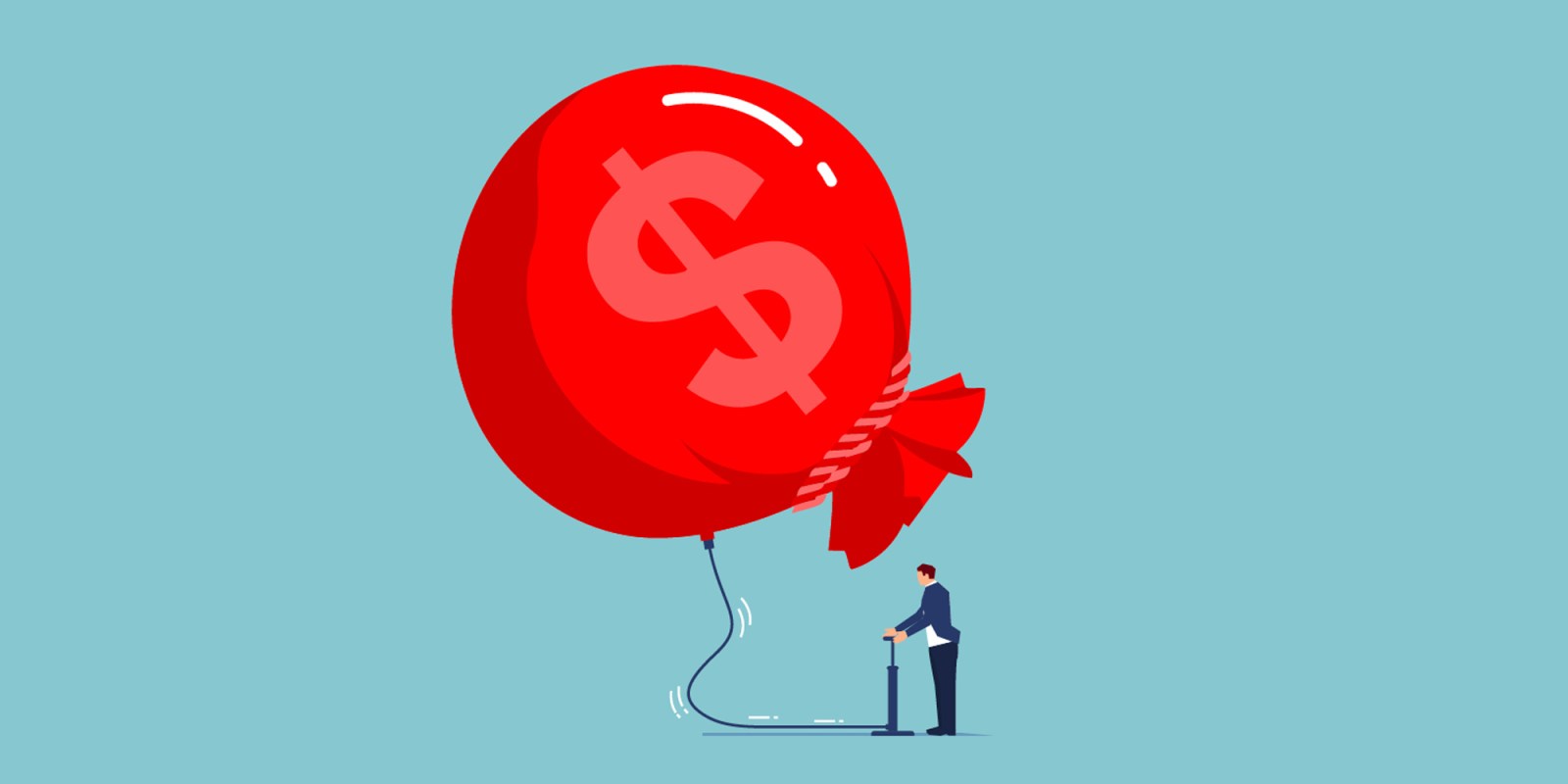 The 40-year-high consumer inflation rate in the US shook global financial markets, with inflation already seen as the top downside economic risk over the next two years. But you need to look through the noise to get a deeper, more considered view of what’s worth worrying about in the medium to long term.

A sizeable overshoot in US consumer inflation has seen investors get into a tizzy when they were already worried about the impact price pressures are likely to have on financial markets over the next two years. The fallout has been clearly seen in the stock and bond markets since then.

US Treasuries sharply sold on the news that the consumer inflation rate had hit a four-decade high in January, with 10-year Treasury yields breaking through the 2% level — 72 basis points higher than a year ago — and the market is now pricing in a considerable six rate hikes this year, one of which may be a higher-than-usual 50 basis points hike early in the cycle.

The surprise number has clearly shaken investor sentiment, which was already under pressure and looking decidedly jittery. An Oxford Economics survey released this week saw US inflation and its impact on the financial market become the primary downside concern for investors over the next two years — ahead of concerns about further Covid-19 waves, supply disruptions and central banks tightening monetary policy prematurely. 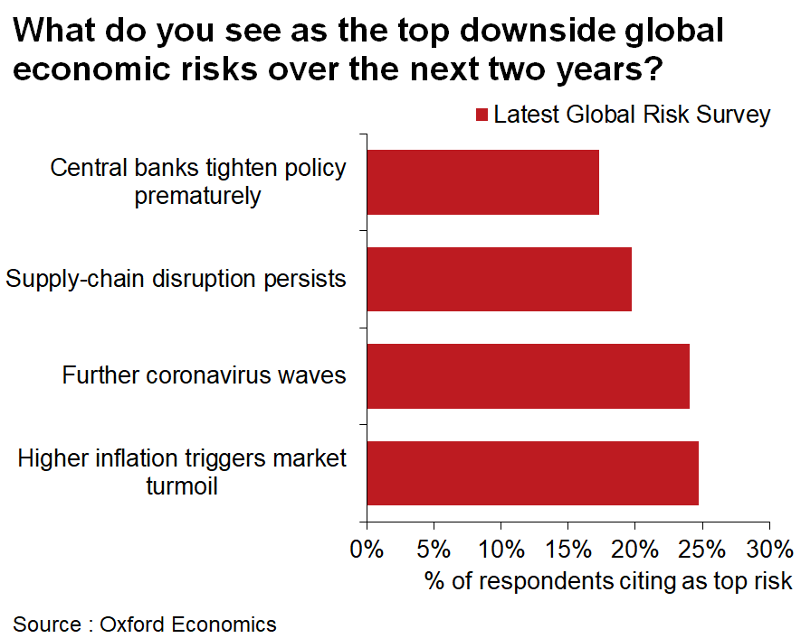 The Michigan Consumer Sentiment Survey also highlighted growing concerns consumers have about the impact of inflation. According to the Bureau for Economic Research, spontaneous mentions of the negative impact of higher inflation on personal finance contributed to a steeper-than-expected decline in overall consumer sentiment in February.

At home, consumer inflation in January came in exactly in line with expectations at 5.7% versus 5.9% in December, with key categories, like food, rising less than some economists’ expectations. As expected, a petrol price decline saw lower fuel prices contribute the most to the decline and the monthly increase of the overall index was a manageable 0.2%. Food price increases were lower than Absa’s expectation of 6% versus the actual 5.7% recorded — all in all, less of a red flag than elsewhere.

However, it’s the US inflation that sets the tone for the rest of the world because it drives central bank thinking and thus determines how much liquidity flows around the world and the relative attractiveness of interest rates driving investor decisions in the global fixed-interest market. Six increases are double the three increases expected at the end of the year and narrow the premium available to investors in, say SA, where 10-year government bonds are trading above 9%.

S&P Global Economics is even more aggressive in its expectations for the number of rate hikes this year, namely six this year and an additional five in 2023-2024. On a positive note, it sees emerging markets as better positioned to withstand these rate hikes than they were in previous cycles.

Looking through the histrionics that financial markets exhibit at times, there has been research that paints a more even-tempered picture of inflation beyond the short term. This week, the IMF pointed out that core inflation rates that exclude energy and food prices and are meant to be more stable than the headline inflation rate because they strip out volatile short-term price swings, have become far more volatile themselves.

They argue that such measures help separate the signal from the noise by stripping all outliers in a particular month rather than just the food and energy producers. It finds two gauges based on outlier exclusions that have been developed by regional Federal Reserve banks in Cleveland and Dallas perform better than the conventional core measures currently closely watched by market participants.

It notes that these have also steadily increased during 2021 and “research found these measures to be less volatile than the traditional core inflation and more closely related to economic slack”. 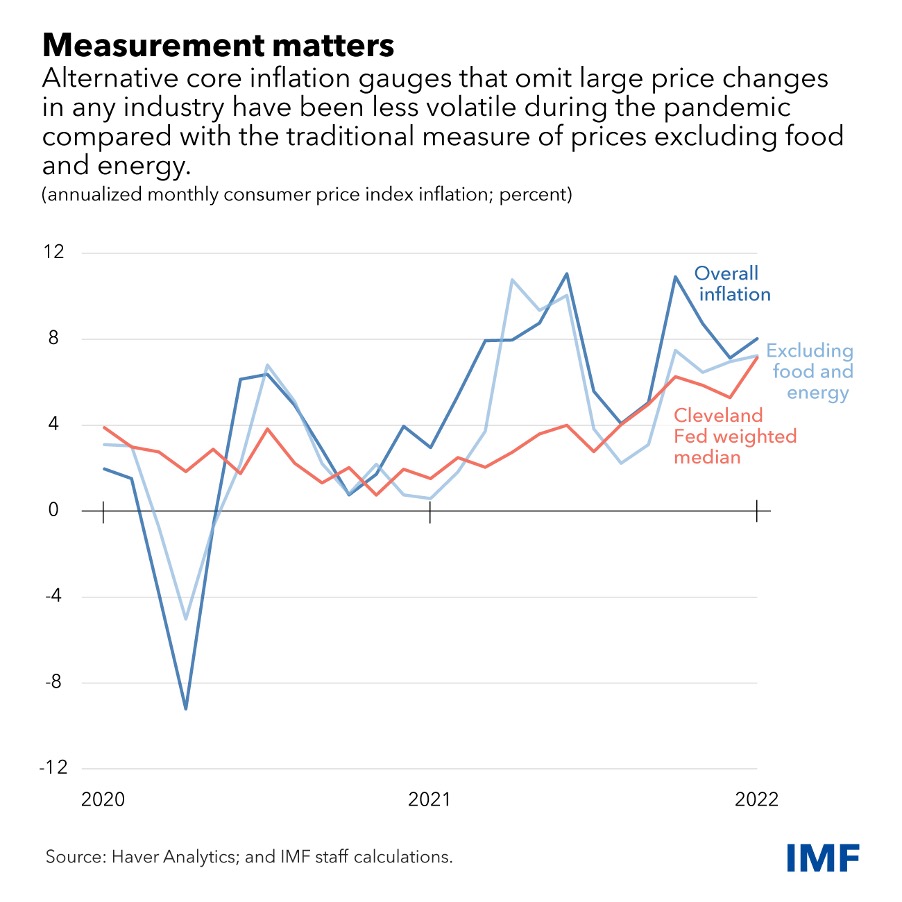 Most crucial to the likely future trajectory of inflation is consumer inflation expectations, which, should they respond adversely to rising inflation, could set in motion a painful self-fulfilling inflation spiral. To gauge how consumers’ inflation expectations have responded to inflation during the pandemic compared with before, Liberty Street Economics did some important analysis and came to the following key findings:

Liberty Street Economics’ conclusions based on these findings are that consumers “seem to recognise the unusual nature of the current inflation experience” and “do not view the current elevated inflation as very long-lasting”. That’s good news for the central bankers, particularly the US Federal Reserve chair Jerome Powell, who may have ditched the transitory description of inflation but is still sticking to his more even-tempered attitude towards where inflation is likely to go this year, in stark contrast to the financial market fearmongers.

The one key risk to inflation, however, is still the extent of the pressure wages are likely to put on prices and how long these pressures will last. Another positive about using the IMF’s suggested median measures of inflation is that they found that over the past three decades they have proved to have a more reliable relationship with unemployment. As such, they are likely to be a useful early warning system if a wage spiral begins to unfold. S&P Global Market Intelligence believes that unless inflation expectations become unanchored, the US economy will be able to avoid what would be a vicious inflation cycle.

For now, it is consumers who are proving to be more unflappable than the investors who are seeing inflation as the risk extraordinaire. Our best bet at avoiding 1970s-style stagflation relies on consumer expectations remaining moderate two to five years out. DM/BM